It was a brutal 2022 for Ukraine. What can the last 10 months of all-out war tell us about the coming year? 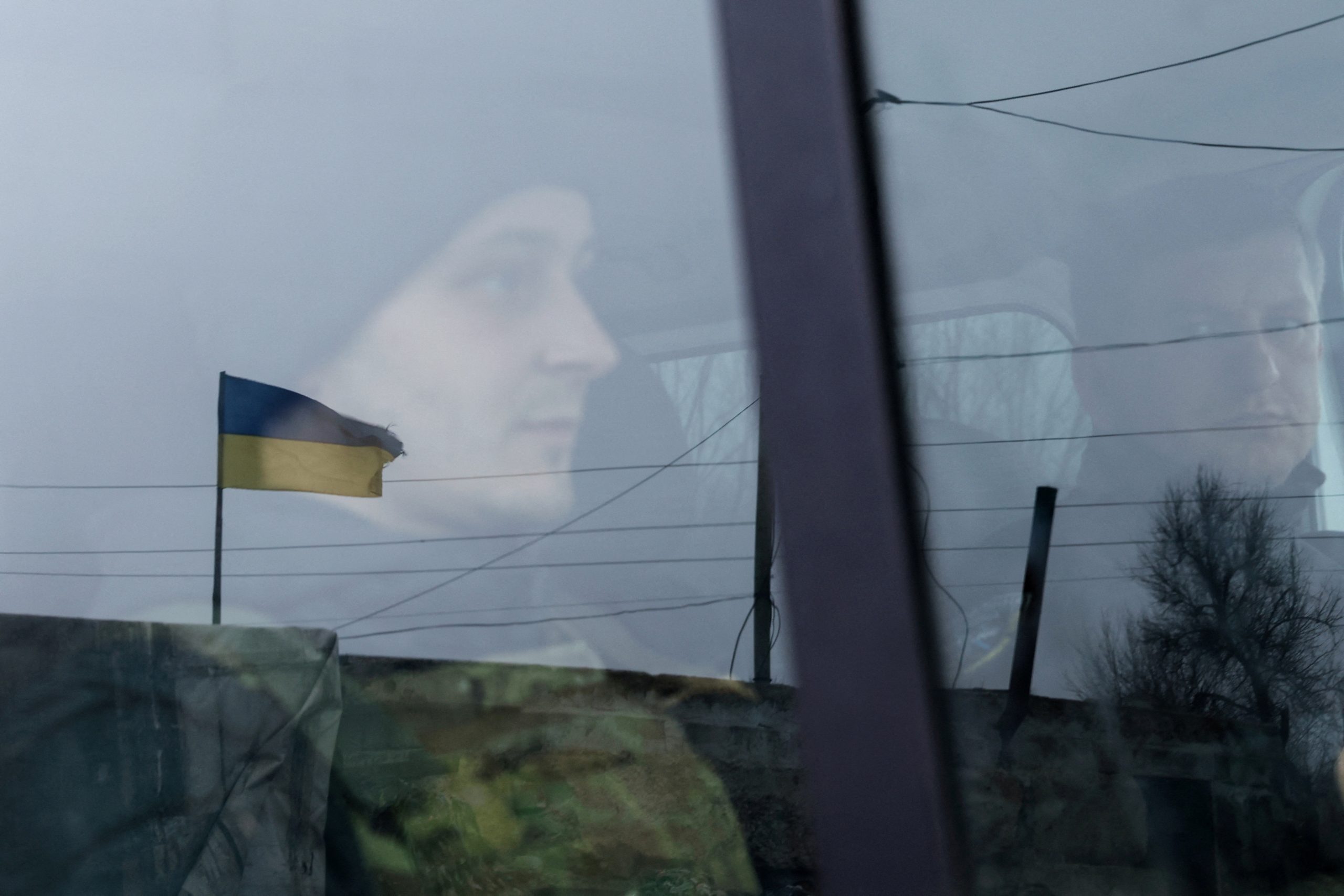 Photo: Members of the volunteer organisation Chaplain Patrol drive Valentyna, 70, to the Pokrovsk train station after she was evacuated from Bakhmut, en route to meet her son in Kyiv, Ukraine, December 13, 2022. Credit: REUTERS/Shannon Stapleton

The first and most important lesson of 2022 is that 2023 is unlikely to see the end of Russia’s aggression. Vladimir Putin has made plain that he is set for a long confrontation and there are renewed signals that the mobilization of Russian males is set to continue.

That said, the situation is far from hopeless. Let’s highlight the positive and negative trends as of the end of 2022.

The first element of good news is the state of the Russian army. It turned out to be far, far weaker than many analysts had predicted before the full-scale invasion and remains bedeviled by significant problems. Many have already been analyzed by Western experts. However, it’s also striking that similar difficulties are highlighted by Russian military analysts. For example, the authors of the “Military Review” website, which is close to the Ministry of Defense, openly admit problems with what some had described as war-winning Russian artillery, which in fact often burned through ammunition without achieving significant results.

In addition, there are problems with unmanned aerial vehicles (UAVs), strategic intelligence, goal setting, and communications, as a result of which “it is quite problematic for the Russian army to attack and maneuver.” Analysts are open about the “everyday problems” with the provision of soldiers with field kitchens that cook hot meals and portable, mobile baths, stoves, and so on.

Russia’s military has suffered grievous if not decisive losses. The US has estimated that it has taken 100,000 casualties, implying at least 25,000 dead, while other estimates are much higher. Fatalities among junior officers, particularly combat leaders, is also very high. And it has lost huge amounts of modern military equipment —more than 8,600 vehicles, including at least 1,600 tanks. Russia has enormous military stockpiles, but the appearance on the frontline of 40-year-old armor shows a military at full stretch.

The mobilization also revealed serious problems in the army, not only in equipping and training the newly mobilized but also with logistics. In the meantime, the Russian military has already ceased to hide the fact that “a second wave of partial mobilization may occur in the spring,” although there are many signs that the first one never truly ended.

All this is happening against the backdrop of internecine conflicts between the regular army and the paramilitaries of Yevgeny Prigozhin and Ramzan Kadyrov, which periodically end in public scandals and high-profile resignations. In general, the increase in the severity and intensity of internecine squabbles among the Russian elite can’t help but suggest that sooner or later they will end in purges and repressions. At the same time, judging by the mood of the “war party” propagandists, the first target of such repression may be the government’s financial and economic bloc — precisely the people that have helped the Russian economy withstand the yoke of sanctions.

The second item of good news is the resilience and professionalism of the Ukrainian army, and most importantly, the continuation of Western aid to Ukraine, which the Kremlin so hoped to see reduced. This fall was marked by major victories of the Armed Forces of Ukraine at the front, and the Kremlin, despite all its efforts, was never able to retaliate. Moreover, despite continued attempts at nuclear blackmail, the evidence is that Putin’s belligerence greatly diminishes when faced with tough military resistance.

The third positive trend is the failure of Russian strategists to involve other, non-Western countries in the bloody reapportionment of the world, on which the Kremlin was betting even before the invasion. That is not, however, to say that the Kremlin has abandoned its plans, especially against the backdrop of growing tensions between the United States and China over Taiwan. Obviously, many authoritarian regimes are sitting it out, awaiting the outcome of the Russian-Ukrainian war. This, therefore, underlines that the conflict is a litmus test of whether the democratic world is able to maintain the existing world order and resist aggression. Even today some of the authoritarian countries are becoming situational or even military allies of the Kremlin; more, in places like Africa, are openly sympathetic to Putin.

Now the bad news. Firstly, Russia currently has the resources to continue the military campaign. The economy, flush with large sums gleaned from rising energy prices, has so far withstood innumerable Western sanctions better than expected (analysts expect 2023 will be much tougher for Russia as sanctions slowly take effect and as workers are drafted into the military.) That anticipated new round of mobilization, combined with a possible increase in the draft age and length of service, will nonetheless provide the front with fresh cannon fodder for some time yet.

However, Russian society has become the main resource that provides a “margin of safety” for the Putin regime. It can be said that during the 10 months of the war, combined with previous years of intense propaganda, the majority of Russians formed a so-called altered state of consciousness, whereby many people have some grasp of the terrifying truth, but perceive it as normal.

Indeed, propaganda narratives are becoming more cynical by the month. For example, if at the very beginning of the invasion, propaganda tried to justify it with emotion-inducing stories about the development of nuclear and biological weapons by Ukraine, it now does nothing to hide the fact that Russia started the war in order to solve its internal problems, primarily electoral ones.

Participants in the country’s main propaganda show “Evenings with Vladimir Solovyov” openly state that before the war “the Russian economy was stagnant”, and this would inevitably have led to economic recession, which, in turn, would have affected public sentiment on the eve of the 2024 presidential election. Former spy Andrei Bezrukov, known for his exotic theories to justify the war, said in December that the main “betrayal” of the elites of the late Soviet period was the very idea that Russians could live well. For this, according to Bezrukov, the authorities dared to deviate from the course set a thousand years ago by the country’s “founding fathers,” which included the “expansion of territories.”

Alongside the renunciation of consumer prosperity is the concept of a popular “sense of unity”; Russians are being asked to forego personal wealth in return for a nebulous concept of togetherness built on national geopolitical expansion. albeit without any compensation All this is openly heard in the main propaganda shows but does not cause the slightest cognitive dissonance among its audience.

Unsurprisingly, those willing to die in Putin’s war remain a minority in Russia, even without accounting for the hundreds of thousands who have left the country altogether. As opposition politician Mikhail Khodorkovsky noted, Putin has failed to turn this war into a people’s war. Yet the majority remain conformist, watch the war from the sidelines, and are unperturbed by the revelations of the propagandists. This means that even in the event of Russia’s defeat and a regime change, there is a lot of work to be done with the society. People who were deceived can be persuaded, but those whose moral norms are seriously degraded, and for whom good and evil are literally reversed, will be hard to win over.

The second negative trend stems from the first. With the majority of Russians ready to endorse any kind of brutality in the name of illusory goals, the Kremlin continues to destroy Ukrainian infrastructure, bringing suffering to millions of people.

The West will have to prepare for a protracted conflict and continue to support Ukraine. Putin’s aggression is inspired more by domestic concerns, like survival and the 70-year-old’s legacy, than by his spurious territorial claims. Since these reasons lie at the core of Putin’s regime, they cannot be solved by any external “appeasement” of the aggressor. The only way forward is through his defeat.