Russian losses in the Ukraine war have been very high, but the deaths of junior officers are especially painful and so too are the strategic consequences. 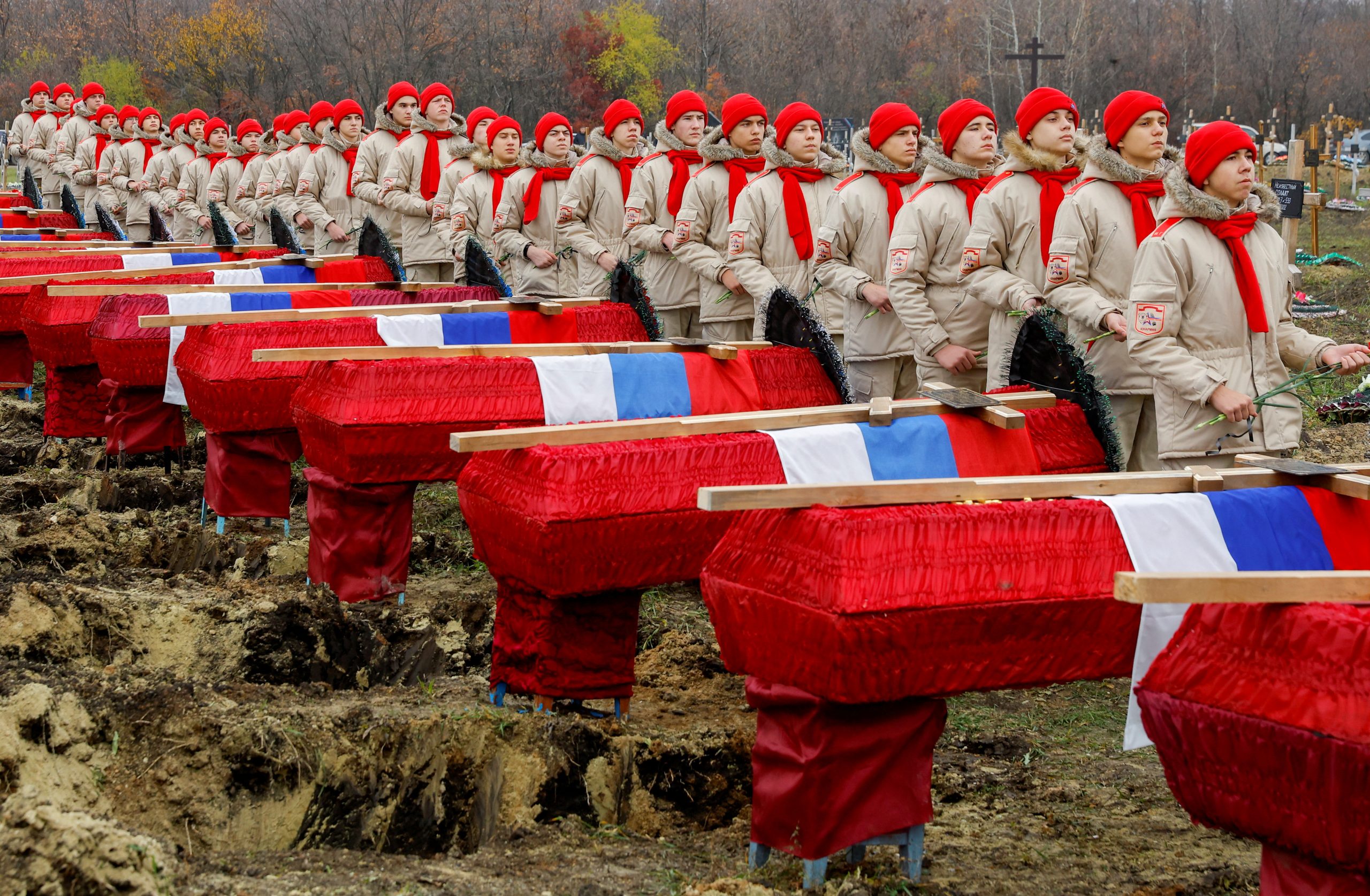 Photo: Participants of a memorial ceremony including members of the Youth Army movement take part in the funeral of 38 pro-Russian soldiers, who were killed amid the conflict with Ukrainian armed forces, at a cemetery in Luhansk, Russian-controlled Ukraine, November 11, 2022. Credit: REUTERS/Alexander Ermochenko

It is easy, with the passage of time, to forget just how enervating is the loss of tactical leaders in large-scale combat operations. In Vietnam, one out of eight US service personnel killed in action (KIA) was an officer — the vast majority second lieutenants to captains — who led platoons and companies.

Open-source researchers at Killed in Ukraine have confirmed 800-plus Russian senior lieutenants and captains KIA. When the loss of wounded in action (WIA) is added, it is likely that half of all competent ground-fighting company commanders in the Russian force in Ukraine are either KIA or WIA. Russia may be running out of missiles, but these can be bought and manufactured; what they are more certainly lacking is able tactical leaders.

Why does this matter? First, tactical leaders are essential to execute combined arms, and company commanders lead the fight by synchronizing fires, movement, and supporting units. A company commander is also the highest-level officer who knows each soldier in their unit, and can drive the execution of a mission by his presence. This matters to the Russian army. Motivation and the will to fight have deteriorated over time.

The company commander also understands how tactical movements play into the larger plan at the battalion and brigade levels. A capable officer at this level represents a more prolonged investment in education, training, and experience to ensure that junior officers are ready to lead effectively. The absence of competent tactical leadership will lead to increased losses, and a more sequential fight as integration fails to work between combined arms, and exposes moving infantry and armor to Ukrainian fire.

Second, the Russian mobilization of an additional 300,000 soldiers requires the instruction of men on how to act as soldiers, and within squads, platoons, and companies. The mobilization therefore increased demand for seasoned infantry, armor, reconnaissance, artillery, and combat engineering junior officers to form and create units from the mobilized masses. If those officers are lacking, mobilized troops will not be able to form mission-capable units, and the mobilized 300,000 can only be used as replacements. They become ersatz soldiers. As these inexperienced and untrained replacement troops fill the ranks in experienced units, they dilute their effectiveness unless competent tactical leaders can train them on the line, which is problematic. The goal of the mobilization — to create strategic leverage — fails, and the additional personnel simply becomes a casualty buffer.

Third, the Russian army doesn’t rotate officers like the United States Army. Russian officers tend to be specialists and spend their whole career in one branch, often on a single weapon system. So with increasing losses of ground-fighting officers, the pool of other officers to divert to maneuver units is limited. A Russian air defense officer who spent his whole 15-plus year career with S-300 air defense units is still a captain and can be reassigned to the mechanized infantry as a company commander, but that is likely an act of operational desperation, which would again increase losses and multiplies failure. The absence of a competent Russian non-commissioned officer corps simply compounds this systematic reliance on junior officers.

It is now almost 50 years since the conflict in Vietnam ended. At the time, it was clear (as it was to the military generations of World Wars I and II) that junior officers acting as platoon leaders and company commanders operate at a hugely heightened risk and suffer significant casualties. The full-scale war in Ukraine is approaching 10 months of large-scale operations, and Russia is running out of these key men. Replacing them will be extremely challenging, at least in the first half of 2023, and perhaps for the whole year ahead. NATO and friendly nations should take note. Ammunition is not the only thing that has a fearsome rate of usage in high-intensity conflicts.

Jan Kallberg, Ph.D., LL.M., is an Assistant Professor in the Department of Mathematical Sciences at the United States Military Academy and a Scientist in the Insider Threat Research program. He is also a  Non-resident Senior Fellow at the Center for European Policy Analysis (CEPA). Follow him at cyberdefense.com and @Cyberdefensecom.

The views expressed are those of the author and do not reflect the official policy or position of the United States Military Academy, the Department of Defense, or the US Government.