In the wake of the dismal performance by Russia’s military in Georgia in 2008, the Russian Federation poured administrative and financial resources into the military. To no avail. 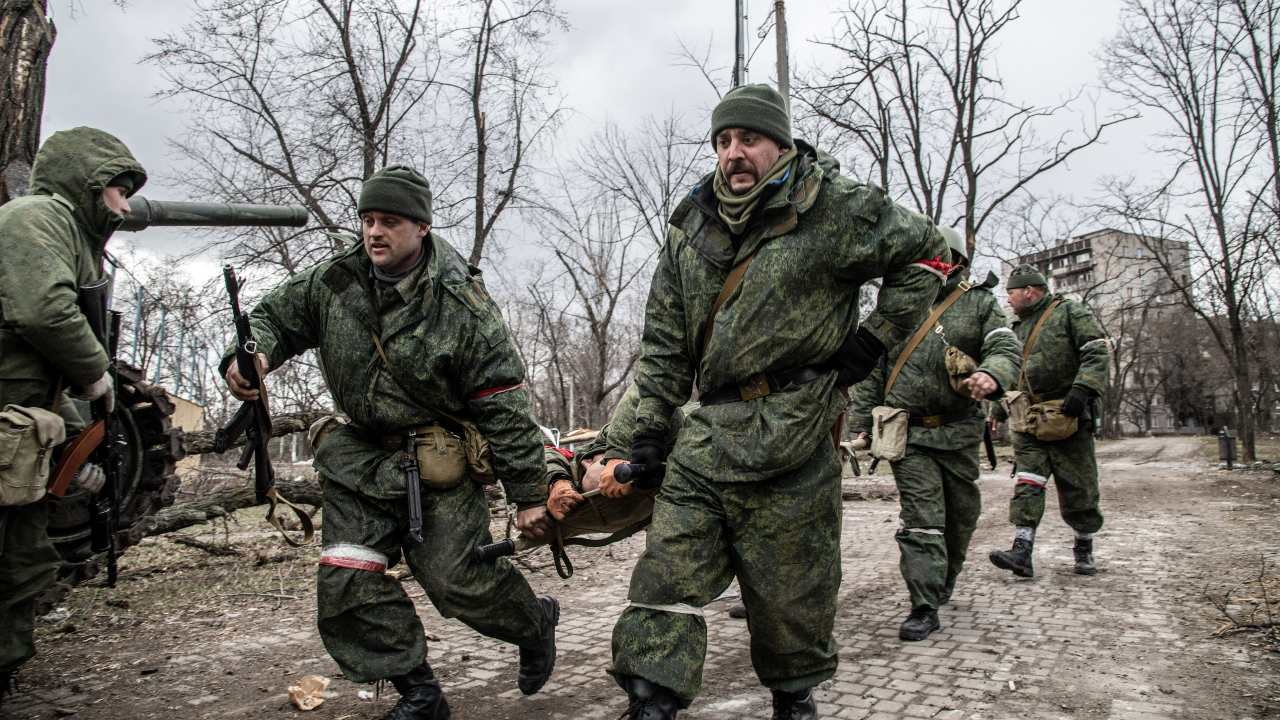 Photo: Soldiers of the DNR (Donetsk People's Republic) run with a stretcher carrying an injured separatist in a contested area of Mariupol. The battle between Russian / Pro Russian forces and the defencing Ukrainian forces lead by Azov battalion continues in the port city of Mariupol. Credit: Maximilian Clarke / SOPA Images/Sipa USA

In a 2020 report, the Congressional Research Service identified the major areas for reform: modernizing military equipment, improving combat readiness and coordination across service branches, command and control, electronic warfare, recruitment of professional soldiers, force structure changes, and logistics. Many informed observers believed that the Russian armed forces had become significantly more formidable, leading some to argue that Ukraine’s smaller and lower-tech force would be swiftly beaten in the early days of the war.

Russia’s dismal military performance in Ukraine has shown not only that it has failed to achieve several of its stated priorities, but also that it has ignored the basic building blocks central to the efficient working of military forces. That debacle is now playing itself out on the battlefields of Ukraine, where its performance has been no better than in Chechnya and Georgia.

Russia, like the United States and China, seems to have fallen in love with technology. It announces triumphs at a regular clip — including intermediate-range nuclear platforms, hypersonic missiles, advanced torpedoes, aircraft, and armored vehicles. All states make decisions on prioritizing and resourcing the various parts of their security services. Countries like the US have the resources to pay for both technology and the sinews of war such as training and logistics. Russia seems to have prioritized one at the expense of the other. And since their public commentary about the success of their military reforms is so clearly untrue, should we also be questioning their claimed advances in technology, such as hypersonic weapon systems?

One place where Russia has focused has been in munitions, particularly intermediate-range nuclear-capable systems such as the Iskander as well as precision-guided munitions (PGMs) such as the Kalibr. They say that they deployed the hypersonic Kinzal missile in Ukraine, however, the munition in the video they released is clearly not traveling at over 3,800 mph (the slowest speed considered hypersonic). Their performance has been dismal. Specialists will remember when the Russians fired 26 Kalibrs at targets in Syria and four went down in Iran, not even hitting the right country.

Recent analysis shows that Russian PGMs are suffering a 60% failure rate, while other analysis shows that the Russians are using dumb bombs in Ukraine because they are running out of PGMs, all of which points to “insufficient Russian investment in PGMs” This Russian modernization could be called a marginal success.

Another area the Russians claimed to have made improvements is in command and control (C2) capability, by refocusing on how they organize and the use modern secure communications systems. A new military district system was created to shift the emphasis at the tactical level from the division to the brigade, copying the US innovation of using brigade combat teams as the main tactical units of maneuver.

Brigades were also reorganized to create Battalion Tactical Groups (BTGs) where the first battalion in each brigade consists of professionals, which allows them to deploy quickly and (theoretically) fight competently. Unfortunately, if most of the professionals are concentrated in the first unit out the door and it then takes significant casualties during an operation, all that is left is conscripts, reservists, and other second-tier personnel, which does not bode well for longer-term operations.

The other major problem they have is with secure communications. The Ukrainians have killed seven Russian generals and a number of colonels because the Russians are using civilian cell phones in an attempt to provide C2 at the forward edge of the battle area. This is a pretty simple way for the Ukrainians to see where senior officers are and to target them.

This failure indicates that the Russians have not invested enough in providing secure C2 assets to their forces. Further, the Russians lacked the ability to coordinate amongst different units: BTG to BTG, front line forces with support forces (including fire support), and ground to air are only some of the areas where the Russians have suffered significant problems.

During the 2010s, the Russians proudly announced a shift from a conscript-based force to armed forces manned by professionals, together with an improved and empowered non-commissioned officer (NCO) corps. A competent NCO corps is what makes the most effective militaries in the world function at the tactical level.

Unfortunately for the Russians, their system is designed to prevent precisely this. Empowered NCOs need to have information and to be able to make decisions while leading. The Russian system is based on tight control of information and highly centralized decision-making. Reports that Russian soldiers deployed for combat believed they were still on exercises in friendly territory are common. This hurts the Russian military where it matters — on the front line. It is extremely unlikely that the Russian military will ever allow an empowered NCO corps.

One of the major areas that the Russians needed to change after 2008 was logistics. But once again, Russia’s armed forces are having difficulty with resupply, with the result that many mechanized units have been sitting by the side of the road out of fuel. No fuel implies no food or ammunition for front-line units. The author worked with a Lithuanian brigadier-general at the Supreme Headquarters Allied Powers Europe (SHAPE) who had been in the Soviet army prior to the Fall of the Wall in 1989. He noted that the Soviets would use existing units and send them into combat until they became combat ineffective. The army would then send in fresh units to support areas that had been successful rather than reconstitute the wrecked units by giving them fresh weapons, ammunition, and people.

This may have been sustainable during the Soviet period when they had a very large ground force and Warsaw Pact allies to provide additional forces. With 850,000 active-duty forces, the modern Russian army is just not big enough to conduct large-scale offensive operations and occupy territories without reconstituting units, especially as their best soldiers were disproportionately concentrated in the BTGs initially sent into combat and badly battered by the Ukrainians.

What went wrong for the Russians? A major problem is corruption. Although the Russian Federation apportioned resources to update the military (the 2010 state armaments program alone invested around $626bn from 2010-20), much of that money disappeared into the greedy maw of the Russian state, mainly the oligarchs and the siloviki or former security service men who run the government for Putin.

Transparency International rates the risk of corruption in operations budgets at “critical” and “high” in the political oversight, financial, and procurement sectors. Polina Beliakova at the Fletcher School has done an in-depth review of this corruption and says that both equipment and logistics suffered as a result. The cost is hard to judge, but some estimates suggest up to 40% of military funds are stolen. Russian publications have reported that service personnel are fed small quantities of rotting food by contractors whose behavior is apparently blessed by the defense ministry.

It is fair to say that Russian military reforms have been a disaster, and not just for Russia. Their failure means that the Kremlin can only succeed by falling back on old 20th-century doctrines of applying overwhelming firepower to a target, like a Ukrainian city, and occupying the rubble with ground forces.

G. Alexander (Alex) Crowther is a Nonresident Senior Fellow with the Transatlantic Defense and Security Program at the Center for European Policy Analysis, is a Professor of Practice for Cyber Issues at Florida International University, and does research for the Swedish Defense University.He has held numerous previous posts including as a Special Assistant for the Supreme Allied Commander, Europe (SACEUR).