With US-Russia talks underway on the future of Ukraine’s security, and with Ukraine absent, the population can only hope for peace and get ready to fight 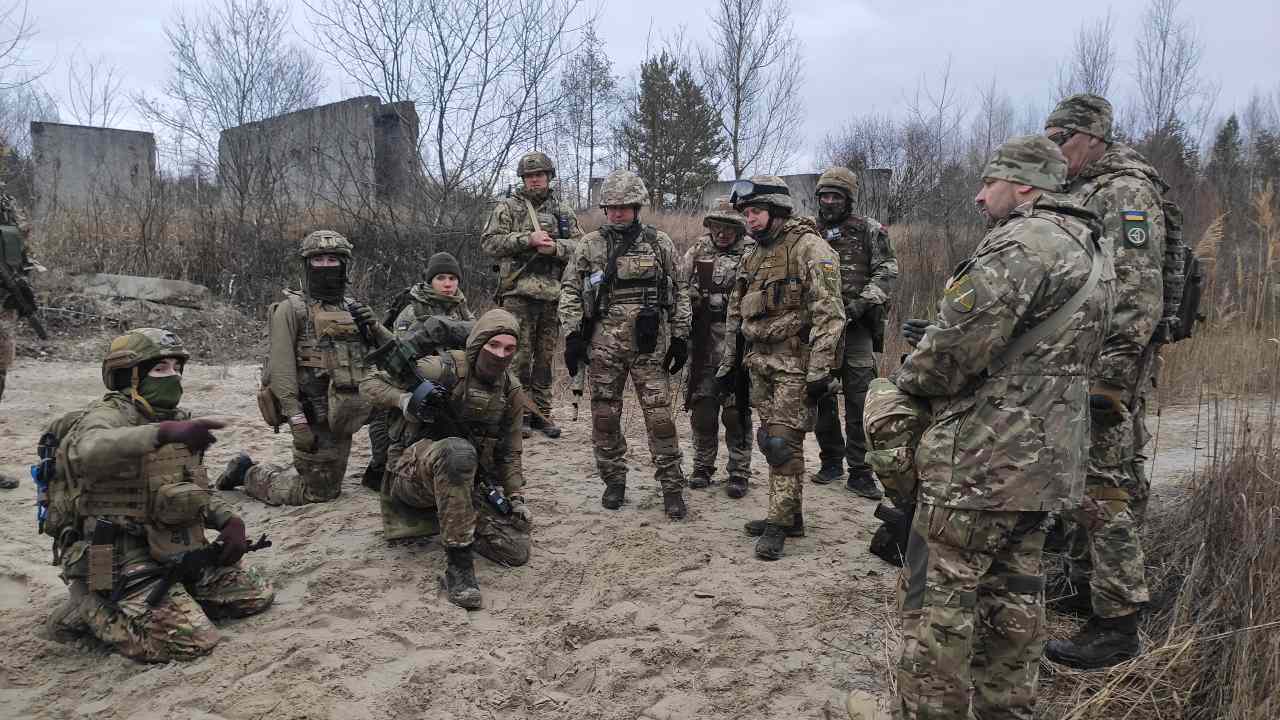 When Ukrainian families gathered for Christmas and the new year, the greatest wish for 2022 was peace. Glasses were raised and prayers were said for soldiers on the frontline defending the country from Russian aggression, risking and sacrificing their lives.

Behind the smiles and good cheer, there was a lurking sense of worry and uncertainty about what the new year will bring for these soldiers and for Ukraine as whole. January begins with 100,000 Russian troops massed close to Ukraine’s borders. The Kremlin’s belligerent rhetoric indicates it is ready to invade again, if NATO refuses to reduce its presence in Ukraine and Central and Eastern Europe, demands which if met would amount to the greatest re-ordering of European security architecture this century.

Negotiations between the US, NATO, and Russia are taking place this week. A day before their start, hundreds of people protested in Kyiv on January 9, urging the West to “Say no to Putin.” Ukrainians have little faith that any progress can be achieved at these talks. But they are sure of two things: first, that they cannot afford to give up on their EU and NATO aspirations, and, second, that they have to be prepared to fight Russia in any case.

Accepting Russia’s conditions would mean the end of Ukraine’s existence as a sovereign state. Current events in Kazakhstan and, earlier, in Belarus, give a glimpse of what could have happened to Ukraine if the 2014 Euromaidan revolution failed and the the pro-Kremlin President Viktor Yanukovych had stayed in power, bringing Ukraine into Russian-led economic and military alliances. Belarusians and Kazakhs who opposed this downgrading of national sovereignty have been crushed, with overt or covert Russian support. It is an open question now whether Belarus and Kazakhstan will be able to preserve their independence.

In 2014, Russia responded to Ukraine’s Maidan victory with the annexation of Crimea and the war in Donbas, which has killed (far) more than 14,000 people. Despite that, Ukraine has been slowly but steadily strengthening its institutions, initiating reforms, battling corruption and moving closer to the EU. The extent to which the country has changed since 2014 is not always fully understood abroad, but for those living in Ukraine it is plain to see.

Ukraine has firmly established itself as a democracy, with largely free and fair elections as overseen by the Organization for Security and Cooperation in Europe (OSCE), whose observers are barred from Russia. The political scene is vibrant political and there is a robust civil society. There is no single center of decision-making despite President Volodymyr Zelenskyy’s parliamentary majority. This sometimes leads to political infighting, but also ensures there is no risk of authoritarianism.

There has been a fundamental shift in the mentality too. Polls show that Ukrainians are more convinced of the benefits of joining the EU and NATO with every passing year. In December 2021, 67% wanted to join the EU, and 59% supported Ukraine’s NATO membership as a deterrent to further Russian aggression. The figures are all the more striking because Ukrainians until recently regarded Russia as a political and cultural friend. Now, Euroatlantic integration is not a matter of choice for Ukraine, it’s a matter of survival. Ukrainians are firmly convinced their future is as a part of the Western, not the Russian world.

Vladimir Putin realizes there is no Ukrainian politician of significant power and popularity who would agree to his demands. Thus he hopes to decide Ukraine’s future with other big powers, such as the US, above the heads of the country’s elected politicians. His goal is to deny Ukrainians their agency and to convince his Western interlocutors that Ukraine’s sovereignty can be ignored. He dreams of a world of yesterday, one in which big powers draw red lines on the maps, marking their spheres of influence, as they did in Yalta in 1945.

Ukrainians are well aware of that, and yet Ukraine is not be present at this week’s negotiations between Russia, the US and NATO. It will only join the talks at the OSCE level on January 13 and is holding separate talks with NATO.

Ukraine’s anxiety that its destiny might be decided in its absence, despite reassuring statements from the allies, is palpable. And there is any way a recognition that no one will be coming to the country’s aid; Ukrainians will have to fight alone.

A new law on territorial defense entered into force on January 1. It mandates the creation of local volunteer units, with the largely unstated aim to organize resistance behind Russian lines should the Kremlin seek to seize more Ukrainian territory. Their total number will be as many as up to 90,000 in addition to the 250,000 regular troops of the Ukrainian armed forces.

“The best and brightest people, most of them with a university degree, are calling in,” he said. “Many are women, also elderly: but the territorial defense age limit for recruitment is 60. We tell them about other opportunities to engage.”

The participants at the unit’s drills came from all social strata. Very young boys, who were going to secondary school when Russian aggression against Ukraine began in 2014, and who have grown up in the country at war, and are now ready to defend it. I met a mother of three, an employee of an international company, who said she would rather work in the garden than carry a gun, but that earlier Russian threats in spring last year had prompted her, together with husband and son, to enroll in a territorial unit. I met a decorated former Ukrainian military officer with experience of work in various international missions, who now teaches territorial defense forces how to protect their cities and villages in case of a Russian invasion.

“Russians will push as far as we allow them to push. Therefore our goal as territorial defense is to make them think twice whether they should go in,” Captain Kostenko told me. “Russia might have enough forces to capture Ukraine’s territory, but definitely won’t be able to hold it.”

There is now a feeling in Ukraine of determination with some added fatalism. War with Russia has been continuing for eight years while would-be European friends have uttered warm words and offered little help. Ukrainians know Putin’s Russia better than anyone and have no illusions regarding the Kremlin’s plans. What they do fear is Western betrayal; that a deal will be struck in their absence to shut the door of EU and NATO membership and return them to a cage where they are ruled from Moscow.

Ukrainians know from experience that appeasement doesn’t work, and that the only possible policy is one of deterrence and resolve. They hope the West has finally learnt that lesson too, but they are far from sure.