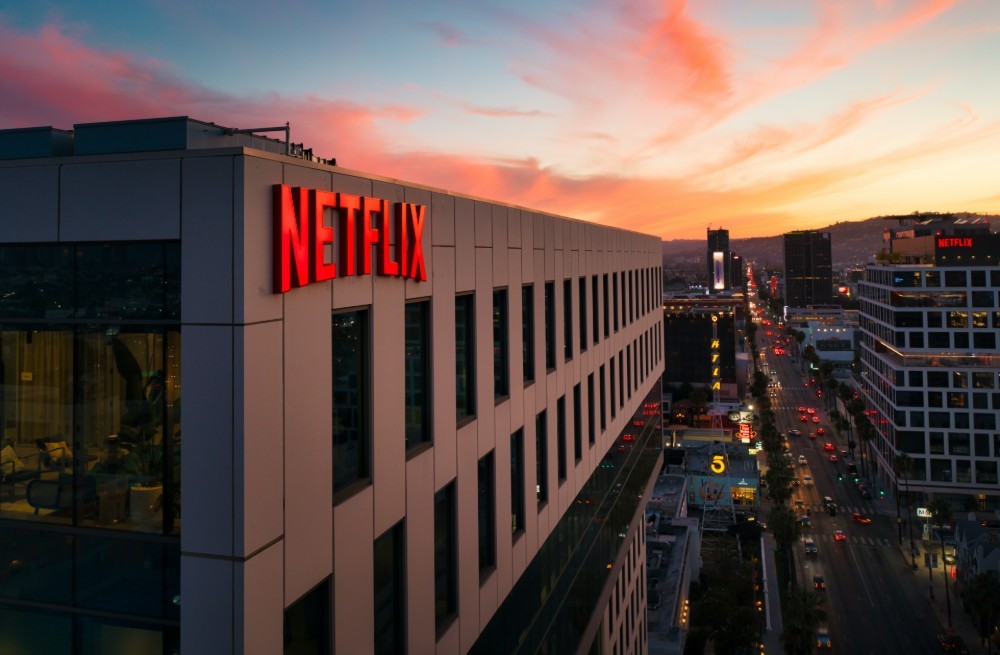 Netflix sign on a building at sunset. Via Unsplash.

But the flourishing European film industry that US-based Internet platforms financed now faces a bleak future. Streaming audiences are stagnating, and planned productions are coming to a halt throughout Europe.

In 2018, the European Commission revised its Audiovisual Media Services Directive (AVMS), mandating that 30% of streaming services’ content originate from Europe. As countries implemented the directive, they introduced investment obligations and tax incentives to strengthen and protect local film industries.

“The regulation has been a double-edged sword,” explains Guy Bisson, a media analyst at Ampere Analysis. “The increased production of local content would have happened anyway because it is competitively interesting. At the same time, when global players push to increase the production in Europe, it potentially hurts local broadcasters and streamers.”

AVMS violated a key component of Europe’s ambitions to construct a digital single market. Until it was imposed, digital companies could set up in one of the EU’s 27 member countries and follow its rules throughout the continent. Now, they are forced to deal with 27 different, local interpretations of the rules.

Politicians considered film as an exception to other digital products since it is a key component of national culture – and voters seem to agree. In May 2022, Swiss citizens voted by almost a two-thirds majority to impose a 30% content quota and require that 4% of revenue generated in Switzerland be invested into the Swiss film industry.

The Swiss campaign illustrates well the pros and cons of regulation. For the amendment’s proponents, the Swiss legislation removes the inequalities between television broadcasting stations and international streaming services, obliging broadcasters to reinvest 4%, while streamers had no reinvestment obligations. Opponents claimed that the 30% quota and 4% tax were protectionist and assumed they would backfire, raising subscription fees for consumers.

After Europe’s AVMS and local tax incentives were imposed, multinational streamers found it profitable to increase production and meet the local content requirement. Since the streamers had strong distribution networks across borders, these local productions proved popular around the globe. By April 2022, Netflix achieved the 30% European content quota in almost all European markets. While other major streaming services like Amazon Prime Video and Disney Plus have yet to meet the 30% requirement Europe-wide, recent data shows that their local content is on an upward trajectory.

Instead of investing in quality programming, the global streamers could have cut non-European titles or engaged in unscripted, low-cost local productions to meet the quotas. Instead, Netflix and other streamers became integrated with quality local film and television producers. Throughout Europe, local studios boomed.

This success has encouraged regulators to tighten rules. A 2021 French decree dictated that streamers must distribute 25% of accrued revenue from their French operations back into the French film industry if they want access to films within twelve months of their theatrical release. Additionally, one-fifth of the total reinvestment must be dedicated to French theatrically released movies.

Netflix would prefer less stringent terms. The streaming giant has hoped to negotiate a 20% total return into French production in exchange for access to films within a year of their release and exclusivity on their platform for an additional 12 months. Currently, the global streaming company enjoys perpetual and absolute ownership rights. French independent producers advocate for shared rights after a three-year period of Netflix control.

Overproduction represents another challenge. HBO Max has halted the production of original European content across many Northern European markets. In Denmark, Netflix stopped production in June in response to demands from actors and producers for increased pay.

Although the 2018 AVMS directive required global streamers to develop local content, it has reached the end of its utility. Netflix, Hulu, Disney, and others recognize the enormous potential reach of European-produced shows.  Additional regulation would only encourage them to finance cheap unscripted content, not the high-quality Lupins, Borgens and Money Heists.

Jan Wenger and Michael Hauser are interns at CEPA. Lauri Kivinen is a non-resident Senior Fellow at CEPA and the former CEO of Finnish Broadcaster Yle.