The West believes it has a choice whether it should directly confront Vladimir Putin in Ukraine. It really doesn’t. 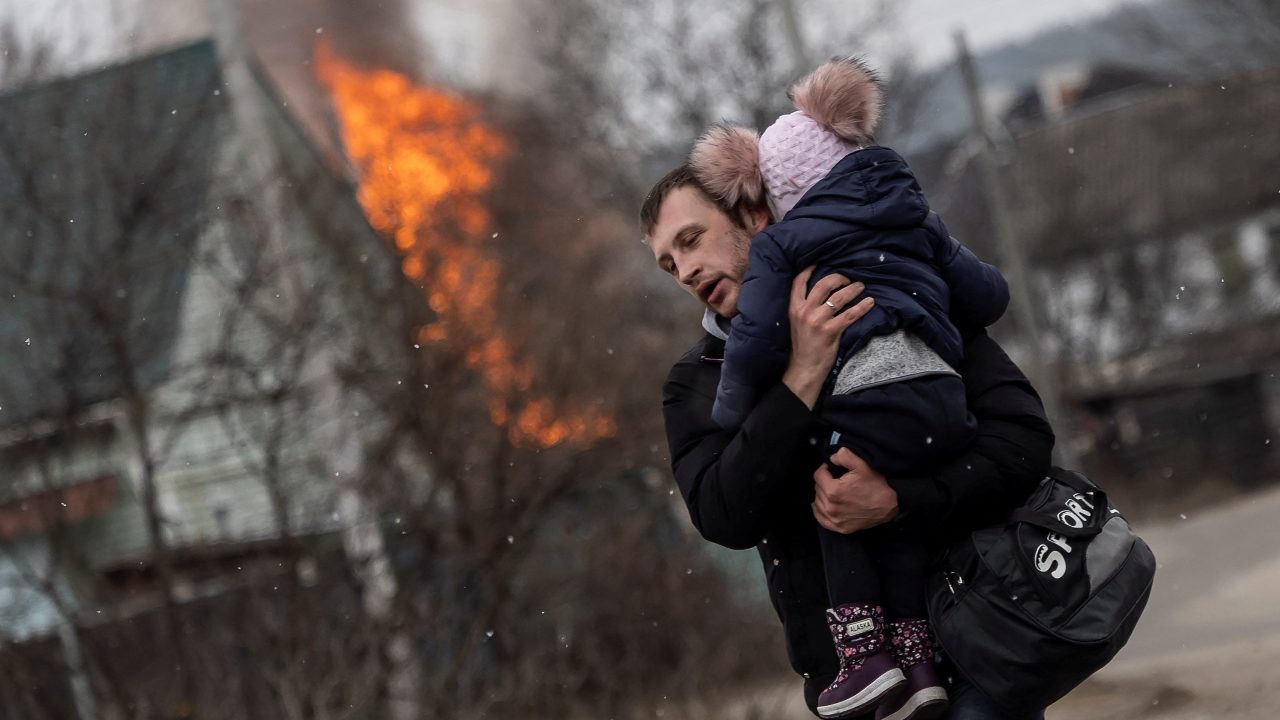 Photo: A man and a child escape from the town of Irpin, after heavy shelling on the only escape route used by locals, while Russian troops advance towards the capital of Kyiv, in Irpin, near Kyiv, Ukraine March 6, 2022. Credit: REUTERS/Carlos Barria.

It is less than two weeks since Goliath invaded Ukraine in a rage. Not enough time to capture his objectives, but enough time to do terrible damage to the people and the fabric of the country, and to do something unintended; Vladimir Putin and his armies are creating a whole, new narrative for the Ukrainian nation.

The nation has new heroes, cities and towns and villages whose names will now be recalled with a shiver of pride and fear, and with a remembrance of the sacrifice and loss of the armed forces, and by the civilians who aided them with such dogged support.

Streets will be named after them, books will be written about their feats, movies will be made telling their stories. The Ukrainian people are an ancient conglomeration, but their new nationhood is just 31 years old. It was confirmed through an overwhelming popular vote, but the early years have not been easy. There has been revolution and war and theft of national wealth, and yet the nation’s unity was never really in question. Opinion polls amid the shelling show that Ukrainians are extraordinarily united: 98% (including 82% of Russian speakers) say Russia has no right to any part of their country; 92% have a favorable view of President Zelenskyy and 86% want to join NATO.

Ukraine’s current story is very clearly not just about Ukraine. There is an understanding in the democratic world that our war is your war too (though that realization has not been enough for NATO’s leaders to order their combat aircraft into Ukrainian skies) and that the northern hemisphere at least has changed forever. New leaders and new ideas will be required in the West to confront this barbarous conclusion to 30 years of peace.

No Ukrainian would have chosen to pay the price now being extracted by the invader. It is horrible. Small children are killed and maimed by high explosives fired by young Russians who probably tell themselves they are merely obeying orders.

But the sad truth is that wars often do make nations, as Czechoslovakia’s playwright-president Václav Havel said after he took power in 1990 (in what Putin would no doubt have called a “coup”, as he does in Ukraine.) As the first democratic leader since Eduard Beneš — the man who decided not to fight after his country was sold by the British and French at Munich — Havel said that if ever his country again faced that dilemma, he would order the military to fight. Because, he argued, the damage done to a nation by not fighting is greater than the damage done by war.

The fruits of 1989 are now no longer as sweet. The rot set in years ago, perhaps in 2008 when the West allowed Putin’s Georgia invasion to go largely unpunished, but certainly after 2014 when he amputated Crimea and invaded Eastern Ukraine.

Since Ukraine was first invaded by Russia, Ukrainians have asked repeatedly for the West not to let Putin go unpunished. Yet, the most serious sanctions on Russia were only applied in July 2014, after Russian-backed forces, on orders from the Kremlin, shot down Malaysian Airlines Flight MH-17 from Amsterdam to Kuala Lumpur over Donbas, killing 298 people. Notably, there were no Ukrainians on that aircraft.

Over the last eight years, much more could have been done to help, and to prevent Putin from going full Hitler. The consequences of that inaction are now described in blood —Russia is targeting Ukrainian civilians and children with missiles, bombs, and artillery, hitting residential buildings, hospitals, maternity wards, schools, and kindergartens. Freedom Square, the central square of Kharkiv, the biggest in Ukraine, was hit by a Russian missile. Another missile landed in Kyiv, close to the Babi Yar Holocaust memorial complex, killing five people.

Among them was my former colleague, TV cameraman Yevhenii Sakun. He became the first media representative to lose his life in this war. Yevhenii’s death has been as senseless as Putin’s war. No rules of combat seem to apply to the Russian army: they bomb Ukrainian cities with particular cruelty, with the only goal to disseminate terror.

According to the Ukrainian government, more than 2,000 civilians have been killed in the first week of the war, and the figure does not include military losses: compare that to 14,000 lives lost in the previous eight years of war. Among them, several dozen children. I wept when I watched the video of the last moments of the life of a six-year-old girl in Mariupol, who was killed by Russian artillery. She was the same age as my child. I cannot imagine what her mother had to go through watching as doctors tried unsuccessfully to bring her precious daughter to life.

Sanctions applied to Russia now, should have applied well before. The flow of dirty Russian money, which served to corrupt and co-opt Western politicians, businesses, and media, should have been stopped. Russian state propaganda on TV and on international platforms, which dehumanized Ukrainians, portrayed them as Nazis and their state as a failure, undeserving of a right to exist, should have been banned. The West cannot deny that it helped fund and legitimize Putin’s war machine.

From the outset, and in stark contrast to Putin’s Russia, Ukraine has been a good international citizen. The 1,900 strategic nuclear warheads it inherited were surrendered in 1994 in exchange for security assurances and pleas to protect its territorial integrity from the US, UK, and Russia under the Budapest memorandum. When Russia invaded in 2014, and again last month, these assurances were barely even mentioned.

The assistance is given now, the political support, and solidarity of citizens around the globe are very welcome. But Putin no longer pretends this is a limited war; he is openly speaking about wiping Ukraine from the map, like some 18th century czar.

Russia is acting tough. It is menacing the neighborhood and is (as usual) seeking to convince a hesitant West that any action it takes will push the world closer to a nuclear exchange. Does anyone really doubt that if Russia half-threatens nuclear confrontation now, it will do so again in the future, perhaps with greater conviction?

There is a lesson from Ukraine that the world hasn’t yet learned and it’s this: Russia only stops when it is stopped. It only understands strength and action, not words. And it is not as powerful as it looks: if Ukrainians can make Russian soldiers flee and surrender en masse, so can others.

It’s a very hard conclusion to digest, but the truth is that Putin has made armed conflict with the West inevitable. It has already begun. The costs of helping Ukraine now — with air support and genuine, military enabled humanitarian assistance at the very least — are relatively low. They will only grow if Putin succeeds in occupying the country, placing Russian forces only a gunshot away from NATO forces and a broader conflict.

By intervening to help Ukraine now, the alliance will also be helping itself. An appeal to the world to act now, while the costs of war are relatively low? I am sure it will intervene anyway, so why not now, before millions are killed?

Olga Tokariuk is an independent journalist based in Ukraine and a non-resident fellow at CEPA – Center for European Policy Analysis.