Who Speaks for Europe?

The once-dominant Franco-German powerhouse no longer exclusively speaks for Europe, as the war in Ukraine has proved beyond doubt. 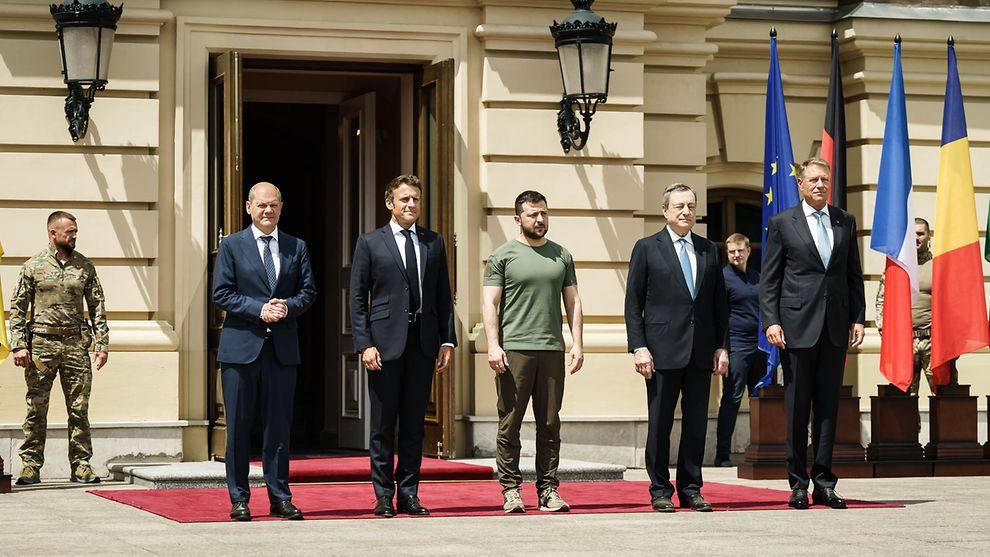 From Romania, France’s President Emmanuel Macron proclaimed that “Nous les Européens” (we the Europeans) will take part in an eventual negotiation between Ukraine and Russia. His was a projection of a French — especially French presidents’ — self-perception: France is “Europe” and Europe an enabler of France’s power, rather than a project with its own logic, at times different or even opposed to L’Élysée.

In Kyiv, with the leaders of Germany, Italy, and Romania, Macron stated that theirs was a message of “European unity for Ukrainians”. And this at least is true: the image of what some pundits call the Big Three on a Kyiv-bound train, is powerful, and welcome.

And yet. A year ago, a last-minute proposal by Macron and Germany’s then-Chancellor Angela Merkel to resume EU-Russia summits was trounced at the European Council. Carefully worded as it was, this Franco-German initiative was seen as an attempt to change through the back door a cornerstone of EU policy since the 2014 annexation of Crimea (suspension of high-level summits), putting at risk European unity. It generated rejection and even contempt, and not just from the usual suspects (Poles plus Baltics): the Swedes, Dutch, and others were scathing. Some talked of “diplomatic amateurism.” No one understood the poor timing of the initiative whether in form (tabled hardly 24 hours before the summit) or substance, right after Russia had carried out massive military posturing around Ukraine — a dress rehearsal for the new invasion — and banned the organization linked to imprisoned opposition leader Alexei Navalny.

Hence only Italy openly backed it, while Spanish President Pedro Sánchez refrained from doing so, instead carefully stressing the need for unity and red lines with Russia.

This spat illuminates Europe’s current political landscape and should be borne in mind as the war drags on and its economic impact rises. Firstly: whereas the Franco-German engine remains the EU’s core power center, it is no longer enough in a fragmented Union of shifting coalitions, which are now issue-contingent (e.g. migration, eurozone, green agenda, etc.). Berlin and Paris cannot take for granted that EU colleagues and institutions will just follow suit when they aim to Europeanize their national positions.

This is visibly the case when it comes to dealing with Vladimir Putin’s Russia. Here, as last year’s dispute showed, Franco-German leadership is challenged, and not just by those who see Russia as an existential threat – but also by others, who, more discretely, question the wisdom of such attempts at rapprochement with the Kremlin. This pattern predated February 24, an event that offered a tragic vindication to those who, against mounting evidence, were looked at as hysterical “Russophobes” — an oft-repeated claim of Russian propagandists. (Those same countries, mostly on NATO’s eastern flank, are now organizing around this theme.)

Moreover, France and Germany never enjoyed delegated authority from the EU on the Minsk negotiations for the Donbas. Putin has killed both the Minsk agreements and the Normandy format (Ukraine, Russia, France, and Germany), which was their consequence. Germany’s Chancellor Olaf Scholz and clearly Macron covet that role, but they may have to reapply for the job. Meanwhile, Ukraine hints at broadening the roster of mediators – and, more importantly, of allies.

True, beyond supporting Ukraine and severing links with Russia, differences on how far to support the war effort and approach potential negotiations could become more substantial. These cut across establishments and societies, going beyond East-West cleavage (e.g., Germans and Spaniards are generally more supportive of arms deliveries to Ukraine than, say Italians).

These debates will grow. As Putin predictably scales up (e.g. in the Kaliningrad exclave, energy war, even threatening a global food crisis and famine through its blocking of Ukraine’s grain, etc.), there is a risk of lessons unlearned. Macron repeats two arguments, echoed by factions of the European establishment: the need to avoid humiliating Russia, plus geography (Russia will always be there). Yet Russians are Putin’s greatest victims: by denying them free and fair elections for 20 years, he and his clique show how they do not see their own people as citizens, but as vassals.

Macron himself and the German leadership have invited humiliation too as they swallowed one Putin lie after another. Macron’s reset with Putin yielded no results, except alienating EU partners. In February, in the run-up to the new invasion, in between one of these Macron-Scholz calls with Putin, this author met EU Sakharov Prize and former Siberian prison inmate Oleg Sentsov in Kyiv. Sentsov, who knows only too well what Putinism is about, recounted that he had warned the French president that he, like many before, would eventually be tricked by the Russian autocrat. Moreover, geography is a hollow point; it makes an abstraction of the irredentist regime and, worse, associates it with the country indefinitely. A bit like saying that because the sun comes out every day, and steadily burns the earth, it is futile to fight climate change.

Foreign policy leadership is largely a function of clout and trustworthiness. Until their visit to Kyiv, France and Germany expended political capital through their association with policies — like North Stream II and the Minsk accords — that spectacularly failed. Premature French worries about humiliating the Kremlin’s blood-soiled occupant and German perceived procrastination on arms supplies to Ukraine, have further eroded that leadership. Their clear support in Kyiv for Ukraine and Moldova’s EU candidate status — a step that makes historic, political, security, and democratic sense — goes some way to restoring trust and creating a truly European position, which would not have been possible without the Franco-German u-turn on Ukraine’s candidacy. But deep-seated misgivings remain, further fueled by messages, such as those uttered on June 21 by Scholz’s foreign policy advisor at a time when Ukraine fights for survival and many fear Russia’s next steps.

There is good reason to worry. Russia, whose top leadership does not foresee an independent Ukraine, envisages a protracted war, hoping the West will tire. The so-called peace camp fails to grasp that an ill-conceived peace now — say a Minsk III — would mean an even worse war tomorrow. Essentially: unless Ukraine is helped to recover lost ground, Russian forces will regroup and strike again, Kyiv included, and might then look for imperialistic exploits beyond Ukraine. France’s newest reassurances go in the right direction — support for Ukraine’s “complete” victory, to be defined by President Zelenskyy, and re-establishment of territorial integrity, followed by a dialogue between Russia and Ukraine, including security guarantees for the latter.

But words must be matched by resources if they are to become strategy. Western military support still falls short of what Ukraine needs against massive Russian bombardments and creeping advances, most obviously in the Donbas. Over time this could preclude any real European path for Ukraine.

I write this from Ukraine hours after the wails of another air raid alarm, sitting in the park of a town crammed with displaced children from the East and South. At any moment, Russian missiles could destroy this semblance of normality and even joy, as they did yesterday, only 50km (30 miles) from here.

It is now clearer than ever that a camouflage-clad former Ukrainian comedian and innumerable anonymous Ukrainians, alive and dead, have earned a right through struggles far from the meeting rooms of the EU’s Brussels headquarters, to speak for Europe. The Commission at least has shown it hears their voice, and, in so doing, speaks for Europe too. Other national capitals should bear this in mind if they are to truly lead Europeans in another darkest hour.