Ukraine’s Offensive — What to Look For

The much-anticipated Ukrainian offensive to recapture the province of Kherson started yesterday, after weeks of preparations and rumors. 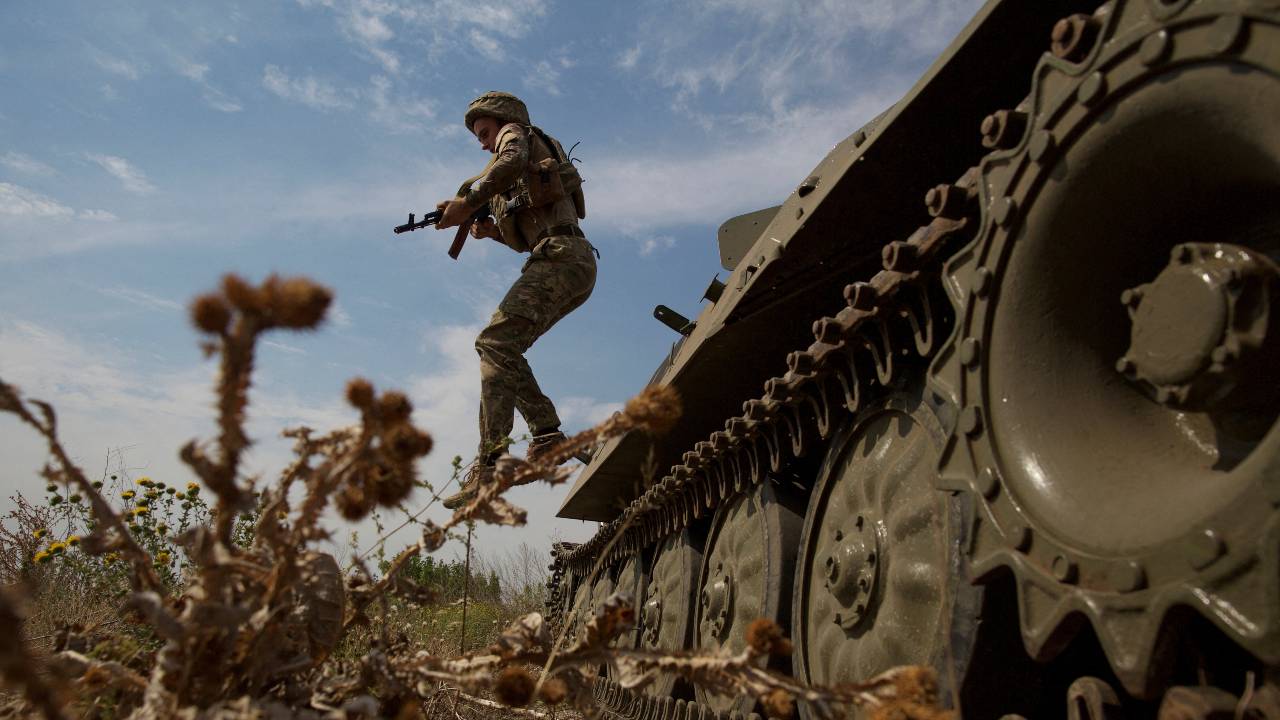 Photo: A Ukrainian serviceman jumps from a military vehicle near a frontline in Mykolaiv region, as Russia's attack on Ukraine continues, Ukraine August 10, 2022. Credit: REUTERS/Anna Kudriavtseva TPX IMAGES OF THE DAY

The Ukrainians are keeping a tight lid on information: Officials have been asked to keep a “regime of silence” for operational purposes – a sure sign that this is indeed a major operation. This may be a major turning point, six months after the beginning of the war.

For the past two months, on the ground at least, the conflict has turned into a stalemate. This is exactly what Ukraine has sought to avoid: A frozen conflict that would slowly be forgotten, just as it had been since Russia’s first invasion in 2014. The Kherson offensive is, in that sense, an opportunity to break that stalemate, and show that time is not on Russia’s side and that Ukraine can, in fact, win.

Yet opportunities tend to come with significant risks and the Kherson offensive is no exception. Ukraine has successfully halted Russian advances in Donbas in the East, and the pace of Russian breakthroughs have decreased significantly. But liberating new territories from Russia is a different endeavor. There needs to be a realization that the idea that an offensive starts with a bang, followed by swift Blitzkrieg-like advances are just that — an idea. The first weeks of the Russian offensive was a perfect example of how misguided grandiose military plans often end as debacles.

Slow and steady is the word. The Ukrainians have been carefully planning their move. In effect, the offensive started weeks ago with a series of precision strikes against Russian weapons depots, and airfields that have since become a near-daily occurrence. Ukraine has been probing Russian air defenses in Crimea, possibly to pave the way for additional attacks, and to force Russia to move some of its systems out of Kherson and into the occupied peninsula. Recent indications that Russia removed an S-300 battery from Syria and transferred it back to a port near Crimea may be a sign that its air defenses are being spread thin. So are the claims by Ukrainian authorities that they were able to carry out a series of airstrikes against Russian positions in the Kherson Region.

These strikes give us an insight into the possible Ukrainian strategy. Though Russia has been able to pile up reinforcements in the south, the Kremlin is also increasingly relying on poorly trained troops with low morale, be it “volunteers” out for a buck, or residents of the so-called “separatist republics” in the Donbas, snatched out of the street and sent as Russian cannon-fodder.

The first days of the offensive will test the cohesion and morale of Russian forces. Ukrainian strikes have effectively isolated Russian units situated on the northwestern bank of the Dnieper: Knowing you may not be able to run once the offensive really starts is a good incentive to do so now, while you still can.

The first week(s) of the offensive will also test Russian logistics and the extent of the damage caused by broadening Ukrainian precision strikes using Western-supplied weapons. When supply lines crumble, defensive lines tend to follow. Those two main factors, morale, and logistics, are the two invisible key elements that may turn the Kherson offensive into a success or a defeat, and allow Ukraine to seize the initiative.

Michael Horowitz is a geopolitical and conflict analyst, as well as the head of the analyst team at Le Beck International. As such he and his team advise multiple companies and NGOs operating in Ukraine following Russia’s invasions. Michael’s commentary and analysis can also be found in multiple international and regional outlets, including major publications like The Washington Post, The Wall Street Journal, BBC, NBC, AP, and elsewhere.