The West Needs Resolve (and Introspection) on Ukraine

Russia’s attempt to rewrite the post-Cold War security order must be met with a combination of talks and clear red lines, even as we put our own house in order. 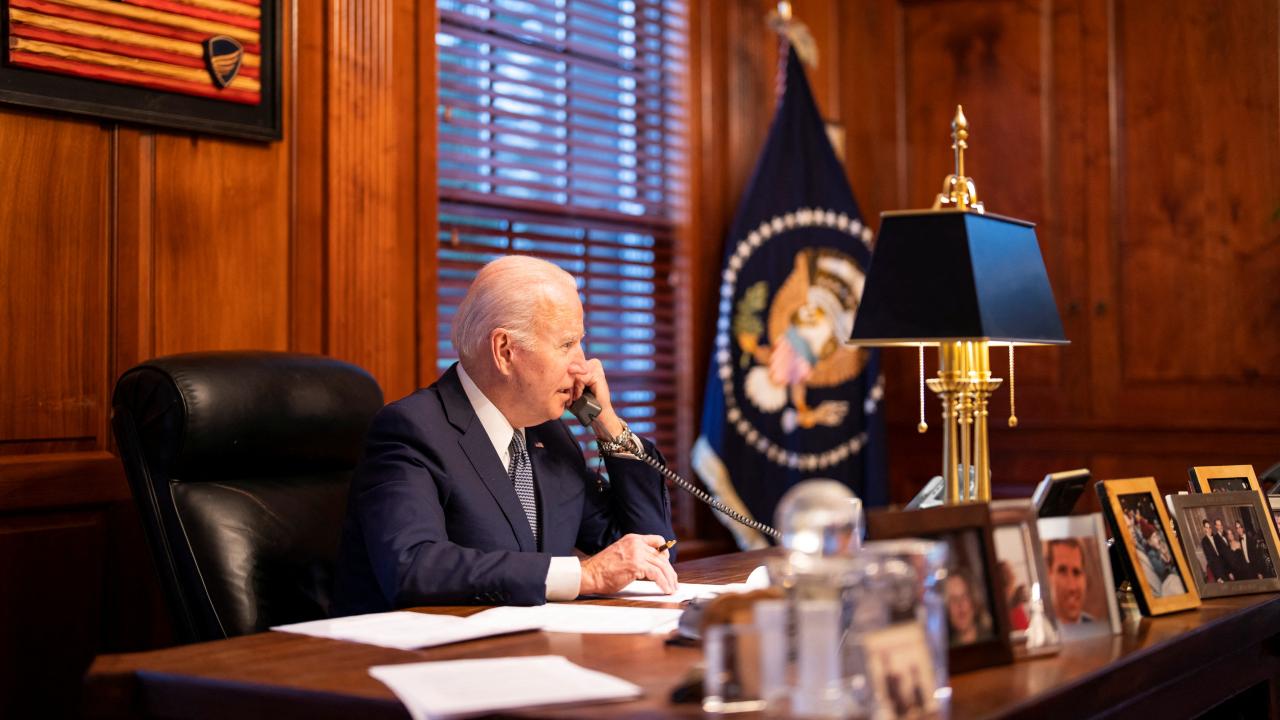 On the penultimate day of 2021, US president Joe Biden and his Russian counterpart, Vladimir Putin held their second phone call within a month, exchanging — according to the readout — sharply worded warnings as well as new year’s greetings.

The grotesque juxtaposition was not even surprising. Considering the situation in and around Eastern Ukraine as around 100,000 Russian troops mass near the border, as well as the hardening tone in Ukraine and the Kremlin, it is far from clear whether the coming year will be terrible or tolerable. All options, from a withdrawal to a renewed invasion and everything in between now sound plausible. According to sources quoted by Kommersant, options such as the recognition of the independence of Eastern Ukraine’s separatist territories and making the presence of Russian military personnel official, or taking “even more radical” steps are on the table.

It is important to note that the overwhelming majority of Russians recognize Ukraine as an independent country. As of November, more people (24%) supported visas between the two countries than unification (18%), even if the latter number has grown somewhat since 2014, according to the independent Levada Center. True, half of Russians believe that the US and NATO countries instigated the recent escalation of the situation in Eastern Ukraine — a result of relentless propaganda in the Russian media — but older generations are vastly more likely to believe this. Meanwhile, the fear of war has significantly grown among Russians in recent years, in parallel with the evaporation of the “Crimean consensus”, which was triggered, in 2014, by the essentially bloodless annexation of territory that most Russians considered to be Russian land.

Domestic public opinion acts as a brake on the hardline nationalist accelerator, placing some limits on what the Russian government can feasibly do in Ukraine without provoking trouble at home. All-out warfare would trigger further and harsher economic sanctions (even though, since 2014, Russia has greatly improved its resilience to many forms of these) and of course a cost in Russian lives. But it would be misleading to overstate this: Russia’s leaders also need to consider the cost of inaction, which, from their perspective, may look higher than the cost of military escalation. In fact, with every statement threatening “technical” (read military) action or stressing the urgency of the situation — and there have been many of these over the past weeks — the Russian authorities are trying to drive home the point that it is increasingly costly for them to back down, and that the price Russia will have to pay in blood and wealth will be lower than for NATO’s counter-campaign.

And the damage that would be done by modern Russian weaponry in Ukraine would be enormous, not to mention the likely cyberoffensive that would likely back it up and that is much harder to deter (Russian cyberattacks against Ukrainian targets never really stopped after 2014.)

So, Russia’s threat is real, and the purpose of the posturing, by the Russian government’s own admission, is nothing less than a redrawing of the post-Cold War security order in Europe.

Despite Putin’s audacity, it would be a mistake to turn down the talks that he has demanded. Discussions between the US and Russia, or between NATO and Russia (scheduled from January 10-12) do not amount to appeasement, as long as they prevent war, and as long as there are things about which to have a substantive conversation. And there are several such issues, from re-establishing NATO-Russia Council meetings and laying down cybersecurity rules, to limiting military drills, or the future of intermediate-range missile deployment in Europe. Discussions also provide opportunities for NATO or Ukraine to bring up grievances, draw red lines and spell out, in clear terms, what response would be automatically triggered by Russian aggression.

Indeed, constructive talks should go hand-in-hand with a clear message that many of the security guarantees demanded by the Russian government in December are non-starters — for example, demands that NATO withdraw troops from member states, promise to reject membership applications, withdraw pledges already made, or commit not to create “conditions or situations that pose or could be perceived as a threat to the national security of other parties.”

Yet greater clarity from the West would be advisable, as protracted ambiguity will arguably vex allies and may further embolden Russia’s hawks. No grand bargain between the US and Russia about Central and Eastern Europe (CEE) can be possible or durable without the support of states in the region. The CEE countries joined NATO as a guarantee against future Russian aggression and these concerns not only still exist, they are magnified by every new aggressive act or statement from Russia’s rulers.

This, however, raises two uncomfortable questions for the US and its European allies.

The first concerns their own waning domestic consensuses around democratic values and the principles of international law. It is usually assumed that time is on the side of the West in this debate, and there is truth in this: for various reasons, ranging from domestic troubles to a perceived sense of a closing door in foreign policy, Putin seems to be looking for quick results.

However, time is not necessarily on the side of NATO’s community of (mostly) democracies. While it is an obvious assumption that President Biden will reject most of the Russian terms offered — which would essentially roll back security guarantees that CEE countries sought through their NATO accession — it is not certain that the next president will take the same view. The return of President Trump — or someone sharing his disdain for Transatlantic alliances — would take the same approach. And this is not only about the US: European democracies have similar vulnerabilities, from former senior leaders on the payroll of Russian energy firms, like Germany’s ex-Chancellor Gerhard Schröder, to former French Prime Minister Francois Fillon to Austria’s ex-Foreign and Putin dance-partner Minister Karin Kneissl, to leaders like Hungary’s Viktor Orbán, who openly question liberal democracy. The continent is far from the largely united Cold War alliance.

So a related question also lurks beneath the surface — whatever happens in summits in 2022, as long as Western democracies remain fragile, why wouldn’t Putin repeat the exercise in two years’ time if the situation seems advantageous?

The second question is about the offers that NATO and the EU are willing to make to the countries presently stuck between Russia and Euroatlantic structures. Many of them aspire to the prosperity, opportunities, and safety that membership in, or closer relations with, the EU promises — Ukraine’s 2014 Revolution of Dignity erupted over this, and not NATO. But the EU offers no credible path, leaving NATO membership, which went hand-in-hand with EU accession in the 1990s and 2000s, the only open path to Euroatlantic structures and the institutional reforms necessary to get there.

Apart from Ukraine – for which presently even NATO accession is not on the table – this is painfully obvious in the Western Balkans, another region where the Russian government is eager to look for allies among the corrupt and the extremist in countries disillusioned with the EU’s discredited promises. There is a way out of this: it should start with a thorough reform of the EU’s moribund enlargement policy, to offer more credible, more tangible, and more immediate benefits to these countries. Whether the EU has the political will to make this happen is another question.

Yet these issues will not disappear. As Russia’s European neighbors are democracies and Russia is increasingly authoritarian, there will be Kremlin-created friction, as Russia’s instinctively hostile response to Belarus’s democratic uprising showed.

This is why any longer-term strategy must also include support to a battered Russian civil society, independent journalism, and every initiative that allows Russian citizens to enjoy their civic rights, access key information, and express their will. A democratic Russia is the strongest guarantee of peace in Europe.

Until that happy day dawns, we must talk to Russia’s rulers, make clear what cannot be accepted, strengthen the democracies in our community, repair broken policies, unflinchingly support our treaty allies and do what we can for friends in the region.

András Tóth-Czifra is a Non-Resident Fellow at the Center for European Policy Analysis (CEPA.) He is a political analyst from Hungary, based in New York City, and is also a Senior Analyst at Flashpoint Intelligence.