The Kremlin’s Next Targets? Georgia and Moldova

Whatever the outcome of Russia's unwarranted war against Ukraine, its implications for Georgia and Moldova are serious and immediate. 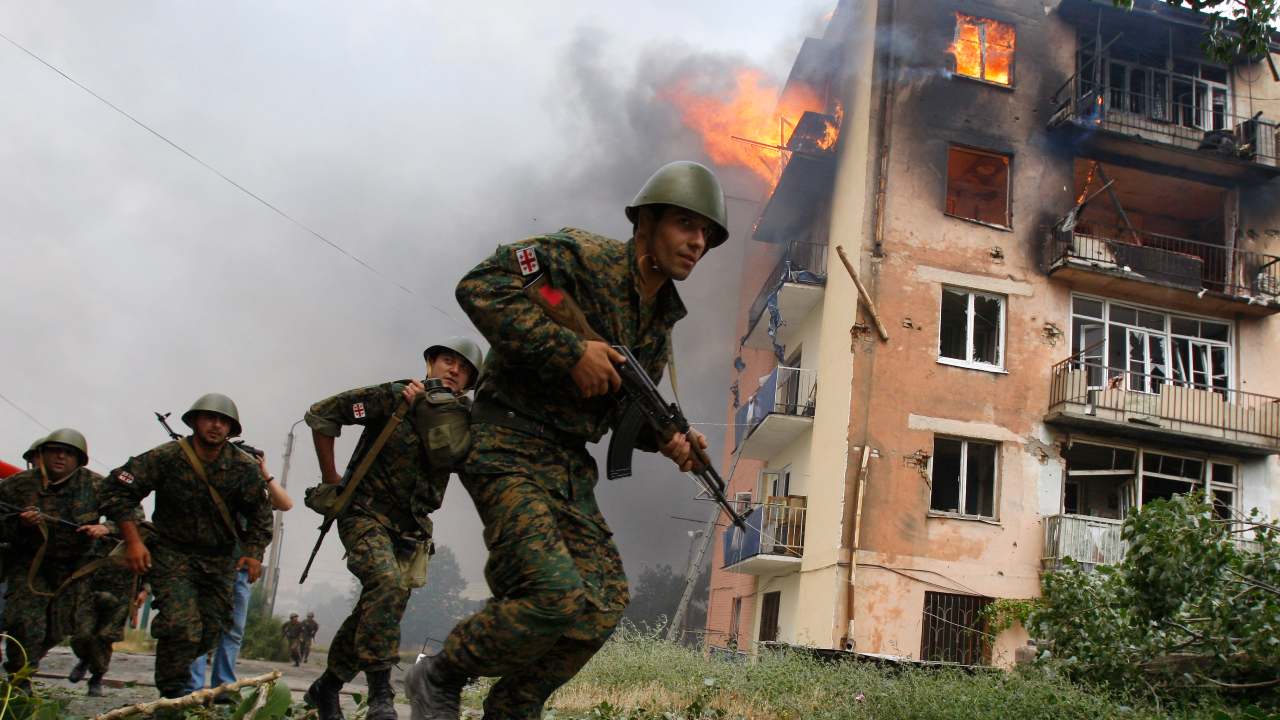 Photo: Georgian soldiers run near a blazing building after a Russian bombardment in Gori, 80 km (50 miles) from Tbilisi, August 9, 2008. A Russian warplane dropped a bomb on an apartment block in the Georgian town of Gori on Saturday, killing at least 5 people, a Reuters reporter said. The bomb hit the five-story building in Gori close to Georgia's embattled breakaway province of South Ossetia when Russian warplanes carried out a raid against military targets around the town. Credit: REUTERS/Gleb Garanich (GEORGIA).

As the world watches aghast at Russia’s barbarism in the cities of Ukraine and the heroic fight of 44 million Ukrainians for their survival and European future, the West must not forget that the next countries in the line of fire are Georgia and Moldova. Whatever the outcome of Putin’s war against Ukraine, its implications will seriously affect both EU Eastern Partnership states.

For decades, Ukraine, Georgia, and Moldova have been in the same geopolitical boat, living uneasily next to a neighbor with a long history of violence. They were bullied by Russia, changed governments despite or because of Russia’s intervention in their domestic affairs, and had problems with democratic development and security. What set them apart was that they always remained much more democratic and European-minded than Russia. All three have very pro-European populations, where the support for Western integration is over 70%. All three also have an illegal Russian military presence in their occupied territories (Crimea, Donbas, Transnistria, Abkhazia, and South Ossetia). The Kremlin sees all three as part of its sphere of influence and an integral part of Putin’s geopolitical project to restore the Soviet Union.

In the 10 days following Russia’s invasion, all three applied to become members of the EU, prompted by this act of aggression and the realization that they lack any explicit security guarantees against renewed Russian attacks.

The question now is whether this trio will suffer the same geopolitical fate, whether they will stay on the civilized side of the iron curtain about to descend across Central and Eastern Europe, or whether the West will have enough power, will, resources and fortitude to keep Georgians and Moldovans away from Russia’s murderous bear hug.

Depending on how the military situation in Ukraine evolves and what sort of diplomatic settlement ends the Russia-Ukraine war, Moldova and Georgia face three strategic scenarios. All three represent dilemmas, and none can be solved without a qualitatively different approach from the Western allies, along with new and robust commitments.

1. Russian defeat, or a stalemate in Ukraine, encourages the Kremlin to seek successful wars in Georgia and Moldova.

In this scenario, Russia will attempt to wage a blitzkrieg in Moldova and/or Georgia. Stalemate or defeat in Ukraine will require soothing the public opinion in Russia, which is already starting to simmer with an anti-military sentiment. Moldova unwillingly hosts the Operational Group of Russian Troops (OGRT), in the self-declared region of Transnistria. The Kremlin has about 2,000 personnel in the country, ensuring it remains divided. While the force is regarded as second-rate, it could be reinforced from the Black Sea. Military options against Moldova proper (and its pro-Western government) could easily be explored. Moldova’s capital Chisinau is a few dozen kilometers away from the Russian military base and within easy striking distance of the Black Sea coast. Airborne assault from the Black Sea is also a possibility, as it is implausible that Moldova will resist the invasion with its limited anti-air capabilities.

In Georgia, Russia also has two illegal military bases — in Abkhazia and South Ossetia, the latter only 60 kilometers (37 miles) from Tbilisi. Reportedly, units from both of these bases have been redeployed to reinforce the Russian forces in Ukraine, with Abkhazia-based troops already taking their first casualties, according to the Ukrainian side. Units from Russia’s 58th Combined Arms Army in South Ossetia have been deployed to Donbas; however, they can be quickly returned to Georgia. Moreover, Russia’s 58th army, located in North Ossetia, and paramilitary troops under the control of the Chechen leader, Ramzan Kadyrov, could be easily used to invade Georgia, as in 2008.

Georgia fought a five-day war with Russia in August 2008; that experience showed that while Georgian combat readiness was high, the inability to close the sky for Russian aircraft and complete dominance on the Black Sea were critical factors in quickly breaking its resistance. Moreover, in August 2008, Russia did not use its military forces in neighboring Armenia. In any new conflict, they could easily be deployed in the Akhalkalaki region of Georgia if Russia so decides.

In this scenario, Georgia and Moldova will have no option but to fight. Georgia’s attrition capacity will depend on the involvement of the West, and in particular, the United States and Turkey. Moldova’s capacity to resist will depend on Romania and the West. In 2008, US and French mediation were critical factors in stopping the war in Georgia. Without Western support, Georgia and Moldova can be occupied within a few weeks while suffering the destruction of their military and civilian infrastructure.

2. Russia’s victory in Ukraine tempts the Kremlin to seek a negotiated surrender of Georgian and Moldovan sovereignty.

If Russia manages to secure “a win” in Ukraine, it will likely imminently apply a victor’s diplomatic solution to Georgia and Moldova. By victory in Ukraine, I mean at least the conquest of the Azov Sea coastline and a land corridor to connect the Donbas region with Crimea, and the acceptance by post-war Ukraine of its neutrality and demilitarization (i.e., no offensive, and limited defensive weapons, no security guarantees, no accession to NATO and an explicit pledge that foreign non-Russian troops will not be stationed on its territory.)

If this happens, Russia will highly likely seek mirror agreements with Moldova and Georgia, accepting neutral status and the renunciation of efforts to join NATO and possibly the European Union (EU), while allowing Russia to deploy troops in these countries beyond territories already occupied (the Gagauzia region in southwestern Moldova, and Akhalkalaki or the port of Batumi in Georgia), while acknowledging that they live within Russia’s sphere of influence (and implicitly accepting neo-colonial status).

This would be a disaster for both countries. Each would require a change of government, in Moldova from a pro-European to pro-Russian, and in Georgia from Russia-friendly Georgian Dream to Kremlin-run pro-Russian parties (such as Alt-Info, or Patriots’ Alliance). In both cases, pro-Western political forces would be purged and either arrested or compelled to seek asylum abroad. They would be forced to change their constitutions, strip out all references to joining Western institutions, and probably state their acceptance of Russian overlordship.

In either the case of war or negotiation at the barrel of a gun, the outcome would be much the same. Russia would get what it demanded, very likely with the assistance of local political forces sympathetic to the Kremlin. And in either case, both countries would end up with Russian garrisons; perhaps not immediately, but eventually.

What will the West do if this happens? A clear commitment to assist Georgia and Moldova in fighting for their sovereignty, including through the provision of defensive capabilities and a clear pathway to European integration, combined with the pledge of further sanctions on Russia, is critical. So too is swift action — this is needed right now, without waiting for the first Russian soldiers and tanks to cross the border.

3. Russia’s defeat in Ukraine, or preoccupation with post-war Ukraine, spreads the Kremlin’s resources too thin to deal with Georgia and Moldova immediately.

This is the most optimistic scenario. Most politicians and large parts of society in Moldova and Georgia cross their fingers hoping for this outcome. Suppose Russia loses the war and appetite to invade other neighbors or becomes wholly preoccupied with the post-war Ukrainian settlement? In that case, it will buy time for Georgia and Moldova to readjust to the new threats to their security and sovereignty.

There is no time to waste. Both Georgia and Moldova should swiftly update the territorial defense strategy, similar to the approach used by Ukraine. Active reserve and professional military should be reoriented to resist Russian aggression. Both countries should seek new defensive weapons and fast-track their reforms and integration into the EU and NATO. In parallel, both must seek robust security guarantees from the EU and NATO. Strong Western commitments will be instrumental.

The West should immediately provide security guarantees to both states to avoid the imminent threat to Georgia and Moldova’s sovereignty. These guarantees could consist of the following components:

This does not have to be executed in a wholly confrontational manner. The West could acknowledge some of Russia’s concerns, and accommodate them by:

If the West stands strong, these should be enough to save the Kremlin’s face.

Georgian and Moldovan politicians have already started discussing what will happen to their countries if Russia wins. I believe that whatever happens, the threats for both countries are real and immediate. Without a clear strategy from the West for countering Russian aggression, Georgia and Moldova are likely to be folded into the Russian sphere of influence.

And while some Western politicians might ask, “So what?”, we now have some compelling answers. Russia will not stop at Ukraine, Georgia, and Moldova. Re-energized and buoyed by victory, even if it is incomplete, Vladimir Putin will inevitably move to the Baltic states and Eastern Europe.

Casus belli will be easy to find, whether the fraudulently alleged mistreatment of Russian-speaking minorities, the necessity to have a land corridor to Kaliningrad, or NATO’s defensive new deployments in Central and Eastern Europe.

We have surely learned the lesson that Putin will not stop. It is better to act now rather than to encourage further adventurism. If the West does this resolutely, it can save two friendly and independent states from destruction, thousands of civilian casualties, and a threat of nuclear war. If not, it will face a more magnified challenge to its own territory.

Dr. Sergi Kapanadze is a professor of Ilia State and Caucasus Universities, founder of the Tbilisi-based think tank GRASS, and formerly Georgia’s vice-speaker of Parliament, and Deputy Foreign Minister.