Spying in Italy: A More Assertive Russia Raises the Stakes 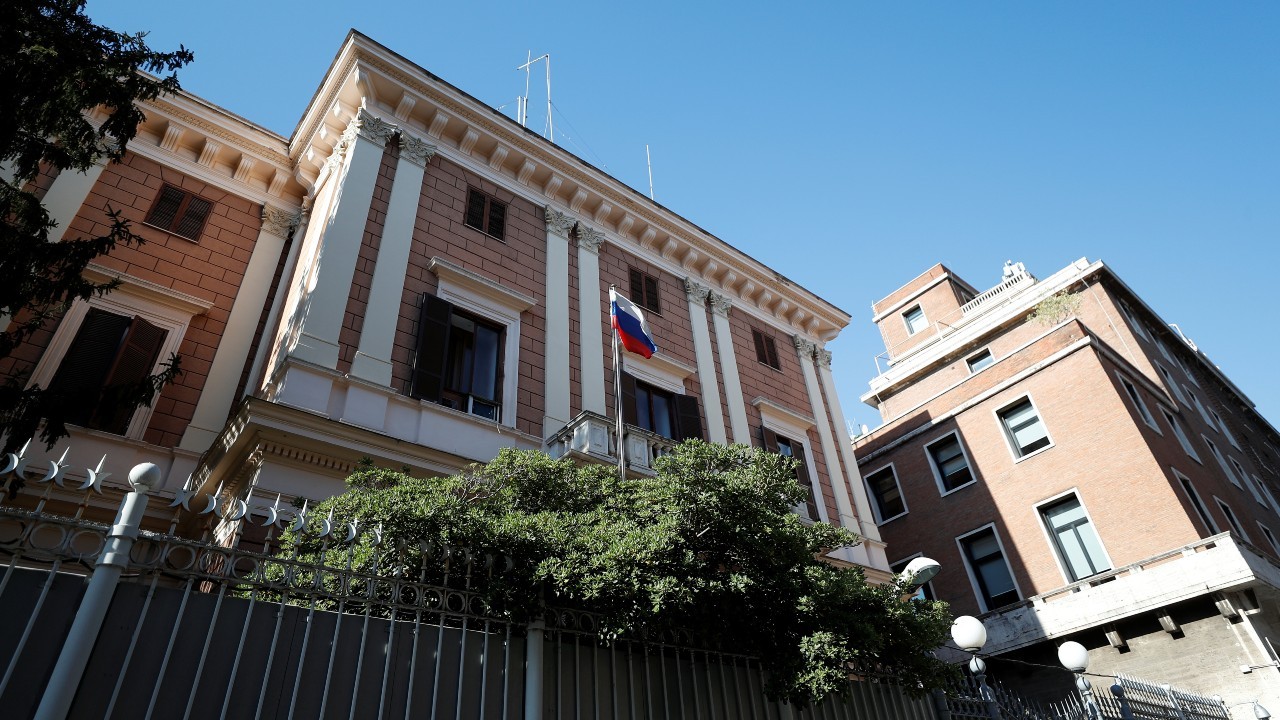 Photo: General view of the Russian Embassy after a Russian army official, who is accredited with the embassy, and an Italian navy captain were arrested on suspicion of spying, in Rome, Italy, March 31, 2021. Credit: REUTERS/Guglielmo Mangiapane

The story is familiar to those who follow the espionage game. Italian special security forces arrested Biot and the diplomat Ostroukhov in a car park, where the naval officer was handing over a flash drive with more than 180 documents said to include screenshots of his computer in the Defense Ministry’s national security policy department. For this, the Russian carried a payment of €5,000.

The Italian incident is a reminder of just how prevalent human intelligence operations (known as “humint” in the spy world) remain, despite Russia’s better-documented use of more sophisticated methods for political interference or obtaining information, like the recent SolarWinds hack against the U.S. and other countries. But while some level of espionage is always to be expected, there has been some surprise that Russia would resort to such tactics towards Italy, a country with which it has consistently entertained friendly economic and political ties.

Some attribute Biot’s bribery as a Russian reaction to Italy’s more convinced Atlanticist approach. The newly installed prime minister Mario Draghi expressed very clear views on the importance of protecting human rights and honoring Italy’s commitment towards the EU and NATO in his very first address to the Senate. Before that, Italian Eurosceptic parties recently loosened ties with Russia: the Five Star Movement, which in the past had repeatedly expressed admiration for Russia has gradually shifted towards a more Euro-Atlantic position as it joined a government coalition in 2018; the nationalist League, which in 2019 was at the center of a scandal involving illicit Russian financial support to its electoral campaign, has been disengaging from ties with Russian nationalist circles; the far-Right Brothers of Italy has preferred to interact with American conservative circles.

None of this is likely to worry the Kremlin. For much of the past three decades, Russia has been developing ties with a wide range of Italian political parties independently of the leadership in power, from the right of Silvio Berlusconi to the left of Romano Prodi. It has been consistent over the years and coexisted with Italy’s approach within the EU and NATO, even when those policies were not to its liking — for example, when Italian troops deployed to NATO’s eastern flank. Furthermore, Italy has mediated between Russia and Western countries, taking a cautious approach towards NATO enlargement and its role in the aftermath of the 2014 crisis in Ukraine, when it pushed for EU sanctions on Russia to be renegotiated every six months. Conversely, Italy has never questioned its Euro-Atlantic commitments and has clearly condemned Russian actions to undermine Ukraine’s territorial integrity.

Russian actions in Italy and Europe should be seen as part of a broader story of both its own domestic pressures and of relations becoming more confrontational under the administration of U.S. President Joe Biden. The covid-19 toll both on lives and the economy have inflicted further damage given Russia’s existing demographic crisis and need for systemic reform, like planned changes to the pensions system that created social discontent even prior to the global pandemic. Following the poisoning and incarceration of anti-corruption activist Alexey Navalny (whose health is further deteriorating in jail), massive protests broke out across Russia this past winter and channeled grievances calling for better economic opportunities and more transparent political processes.

To divert domestic attention and in response to the US administration’s efforts to support Ukraine’s territorial integrity and tackle Russian illicit financial operations around the world, Russia has increased its military presence at the border with Ukraine, risking thawing what was potentially evolving toward a frozen conflict. Highly dependent on the power balance between the president and the oligarchs, and increasingly pressed by domestic issues, the Russian regime is trying hard to disrupt U.S efforts to draw the allies towards a stronger position against Russia. By pushing for gains on the ground – as Russia is doing in eastern Ukraine – Russia aims to confront the U.S. from a position of strength; in the meantime, Russia is continuing to challenge the West with spying activities and disinformation operations aimed at discrediting democratic leadership.

So far, the West’s response to Russian espionage has lacked cohesion. In 2018, after the poisoning of former Russian agent Sergey Skripal in London, Italy and other NATO countries expelled Russian diplomats in solidarity with the United Kingdom. However, despite the gravity of the situation, the volume of these expulsions has been more symbolic than concrete and appears to have had no effect whatsoever on Russian intelligence operations. Even before the Italian case, both Bulgaria and the Netherlands last month expelled two Russian diplomats each— the accusations in Bulgaria related to espionage on NATO and security matters, and in the Netherlands to spying on the high-tech sector.

While it is difficult to prove accountability for cyber-attacks, the explicit connection of the events in Bulgaria, the Netherlands, and Italy to Russian officials should be a wakeup call for the West to provide a more cohesive response.

A weak reaction will likely feed the now longstanding Russian narrative of Western inaction and Russian impunity, which can only help Putin’s regime and its domestic and international supporters.

Giovanna De Maio is a fellow at the Institute for European, Russian and Eurasian Studies at the George Washington University, and a non-resident fellow at the Brookings Institution. Twitter: @giovDM