In the Name of God, Go

Russia’s Orthodox Church has squandered all goodwill with its blessing for Vladimir Putin’s bloody behavior. The world’s foremost Christian church organization should boot it out. 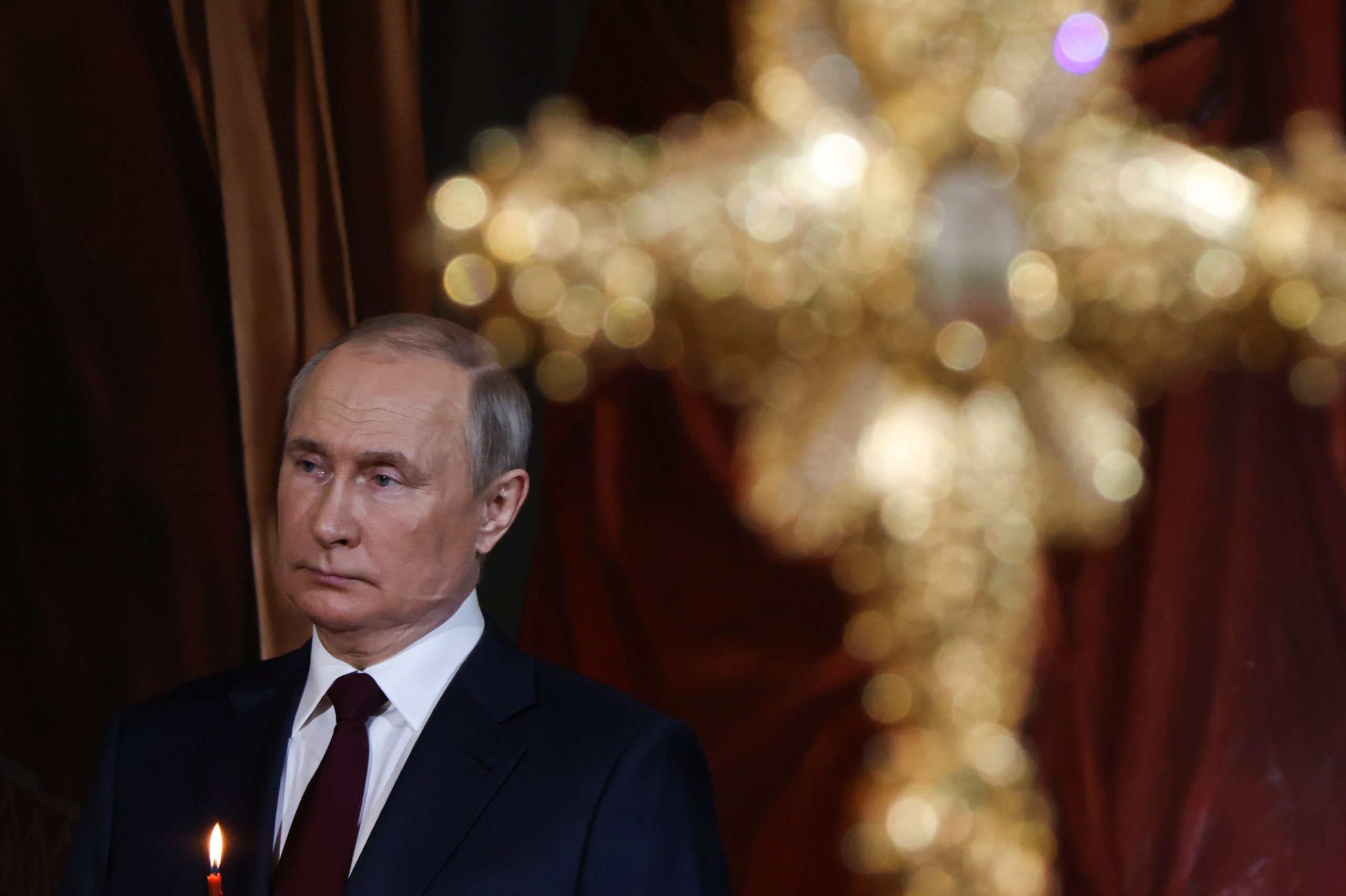 Photo: Russian President Vladimir Putin holds a candle as he attends the Orthodox Easter service at the Cathedral of Christ the Saviour in Moscow, Russia April 23, 2022. Credit: REUTERS/Maxim Shemetov

The World Council of Churches (WCC) is what one might call the United Nations of global Christianity. Ever since it was founded in 1948, the global forum – which comprises non-Roman Catholic Christians of every flavor – has convened its member churches for earnest discussions on matters of Christianity in the modern world. The Russian Orthodox Church is one of the WCC’s largest member churches, and still includes many who bravely held out despite repression by the Soviet authorities before 1991.

But today, the denomination’s leaders repeatedly endorse violence against innocent people. The Russian Orthodox Church must be suspended from the WCC.

During the Cold War, the Geneva-based Council was such a powerful body that Warsaw Pact authorities took an active interest in it. Through clever use of clergy doubling up as KGB agents, the Soviet Union so successfully managed to steer attention away from its persecution of Christians (largely by steering the focus towards race issues in the US) that the WCC’s assembly condemned the latter but stayed absolutely schtum about the former.

East German pastors traveling to the WCC, meanwhile, often received instructions from East Berlin about what would be advisable to say, and the Stasi’s church department kept in close touch with them. (as detailed in my book, God’s Spies.)

The WCC’s salience has receded somewhat since the end of the Cold War terminated such ideological battles. But with 352 member churches representing 580 million Christians in 120 countries, the Council remains a powerful institution. It represents denominations as different as the Old Catholic Mariavite Church in Poland, the Silesian Evangelical Church of the Augsburg Confession, and the Church of Jesus Christ in Madagascar. The Russian Orthodox Church, with more than 160 million members in Russia, Ukraine, Belarus, Moldova, Kazakhstan, and a few other countries, is one of the largest members.

And the WCC serves a worthy cause: according to its statutes, member churches “are called to the goal of visible unity in one faith and one eucharistic fellowship; promote their common witness in work for mission and evangelism; engage in Christian service by serving human need, breaking down barriers between people, seeking justice and peace, and upholding the integrity of creation; foster renewal in unity, worship, mission, and service.”

There’s little sign that these goals have influenced the statements of the Russian Orthodox Church since the all-out war of aggression against Ukraine. Soon after the Kremlin began mobilizing 300,000 men in the fall, Patriarch Kirill declared his hope that as few soldiers as possible would be killed in “this fratricidal war.” But, he added, “if a person dies in the performance of this duty, then they have undoubtedly committed an act equivalent to sacrifice. They will have sacrificed themselves for others. And therefore, we believe that this sacrifice washes away all the sins that a person has committed.”

The men who have been mobilized clearly have little choice but to obey (or risk arrest if they try to flee), but as a figure of such seniority and international standing, the Patriarch did have some leeway. By issuing such absolution of individual soldiers, the Russian Orthodox Church’s leader condoned the war itself and — implicitly — the murder, torture, mass kidnappings, and attacks on civilian facilities that have characterized its conduct.

This is not a sudden development. Over recent years, Kirill has associated himself so closely with the regime of Vladimir Putin that even by staying silent over the war he’d be condoning it. Instead, he has repeatedly voiced support. As highlighted in a previous piece of mine for CEPA, the ROC’s second-in-command — the somewhat more moderate and far more talented Metropolitan Hilarion — was this summer banished to a remote post for failing to openly follow his Patriarch’s lead.

As all Christians know and regularly profess, no Christian is perfect. But the Russian Orthodox Church is not only failing to live by the WCC’s standard of living visible unity in one faith, working for mission and evangelism, serving human need, breaking down barriers between people, and seeking justice and peace: its leaders are actively showing their utter contempt for such Christian values. In Nazi Germany, the Warsaw Pact’s communist regimes, in North Korea, and in modern-day China, Christians have lived under the rule of unjust, repressive rulers. Not everyone — Christian or otherwise — is a hero, and it would be unfair for outsiders free of such risks to demand resistance or martyrdom from others. But while Kirill may have to make compromises with the Kremlin in order to protect his church, his public support of the war has gone far, far beyond such basic cooperation.

It is time that the WCC acknowledged this and suspended the Russian Orthodox Church’s membership: it cannot harbor a war-mongering organization that mocks the WCC and global Christianity, even as the broader membership strives to live by the WCC’s worthy goals.

Being booted out by the United Nations of global Christianity is unlikely to sway the Russian Orthodox Church, any more than various diplomatic conventions have swayed the Kremlin. But it needs to be done, if only for the sake of simple, Christian decency.