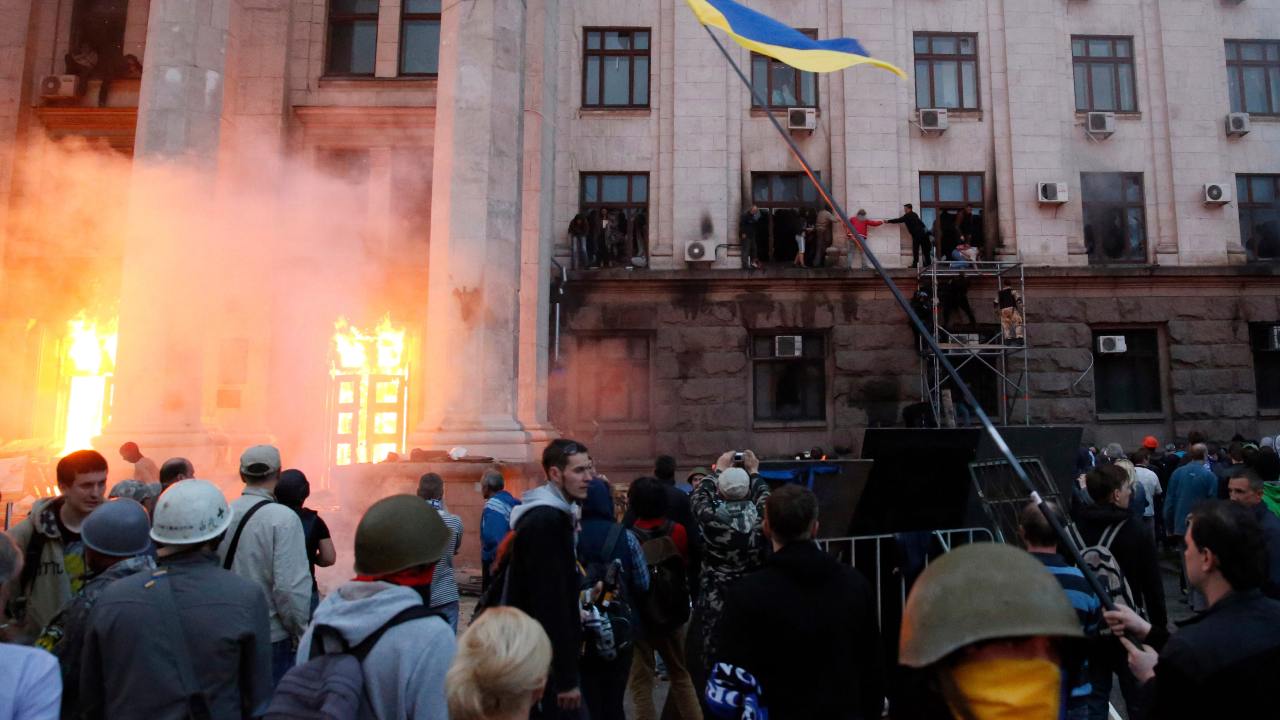 Most of the propaganda themes used by Russia to try to justify its invasion of Crimea and aggression in eastern Ukraine dated back at least as far as the 2004 “Orange Revolution.” They took on a whole new dimension following the Euromaidan revolution of 2013-14, reaching a level so extraordinary that the head of one state TV channel reportedly said that they made Cold War disinformation look like “child’s play”.

Portrayals of the new government in Kyiv as a “fascist junta”, supported by anti-Semitic hordes and waging genocide against Russian-speakers did however hit major obstacles. Prominent Ukrainian Jewish figures took out full-page adverts in several international newspapers to debunk such claims and condemn Russian aggression. On several occasions, Jewish or other ethnic minorities issued public statements dissociating themselves from fake ethnic groups claiming persecution.

There was further incontrovertible evidence that the rampant fascism narrative was nonsense. In May 2014, the two Ukrainian far-Right presidential candidates together received a mere 2% of the popular vote. While there are certainly far-Right groups in Ukraine, and the authorities often fail to respond adequately to racist or homophobic attacks, the scale of the problem remains small. Despite this, any report about the far-Right or anti-Semitism in Ukraine is far more likely to hit the headlines than stories about similar trends in Russia, or about Russia’s extensive links with far-Right groups in European countries.

Aside from the Baltic republics, which know all about Russia’s information warfare tactics, the international community has been frustratingly slow to recognize the danger posed by Russian-sponsored disinformation and propaganda. The starting point has always been that media pluralism is the answer and that any restrictions constitute censorship.

The problem is, however, that most people have no idea that they are being deceived and would simply not think to verify the information they receive if they watch Russia’s state-funded RT (formerly Russia Today), assuming this to be a Russian version of the BBC or Deutsche Welle.

It is seven years since 48 people died during disturbances and a terrible fire in Odessa.  The flames were still smoldering when Russia first began presenting the conflagration as a massacre by Ukrainian nationalists. This has continued regardless of several investigations, by the bipartisan 2 May Group; the Council of Europe’s International Advisory Panel and the Office of the High Commissioner for Human Rights. Each has found that the earlier disturbances began when a large group of pro-Russian activists attacked a peaceful march in support of Ukrainian unity. From then on, weapons were used by both sides and six people were killed. Toward evening, pro-Ukrainian activists headed towards Kulikove Pole Square intending to destroy a tent camp set up by pro-Russian activists. The latter responded with gunfire and Molotov cocktails from the roof and windows of the Trade Union building. All independent reports agree that with Molotov cocktails being thrown both at and from the building, it is impossible to determine the source of the fire which caused the death of 42 pro-Russian activists.

It is quite clear that Russian state media and politicians are aware of the findings since they invariably cherry-pick the reports wherever these criticize the Ukrainian authorities. It should be said that Ukraine’s abject failure to carry out a proper investigation does deserve condemnation, especially since lives would have been saved if firefighters had not taken 40 minutes to begin tackling the flames.

Two years after the Council of Europe’s report, Russian President Vladimir Putin claimed that, “Ukrainian nationalists drove defenseless people into the Trade Union building and burned them alive”. This knowingly false story has now been peddled around the world, with generously financed exhibitions and carefully selected “witnesses” taken on tours of European countries.

It is a story that is known to have cost even more lives, with many of the young men who volunteered to fight for the Kremlin-backed insurgents in eastern Ukraine citing the alleged “Odessa massacre” as a catalyst.

Halya Coynash is a member of the Kharkiv Human Rights Protection Group and PEN Ukraine, and writes on human rights and media issues