The war in Ukraine is not about Ukraine, it’s about one man’s desire to return to the past. NATO must stop him. 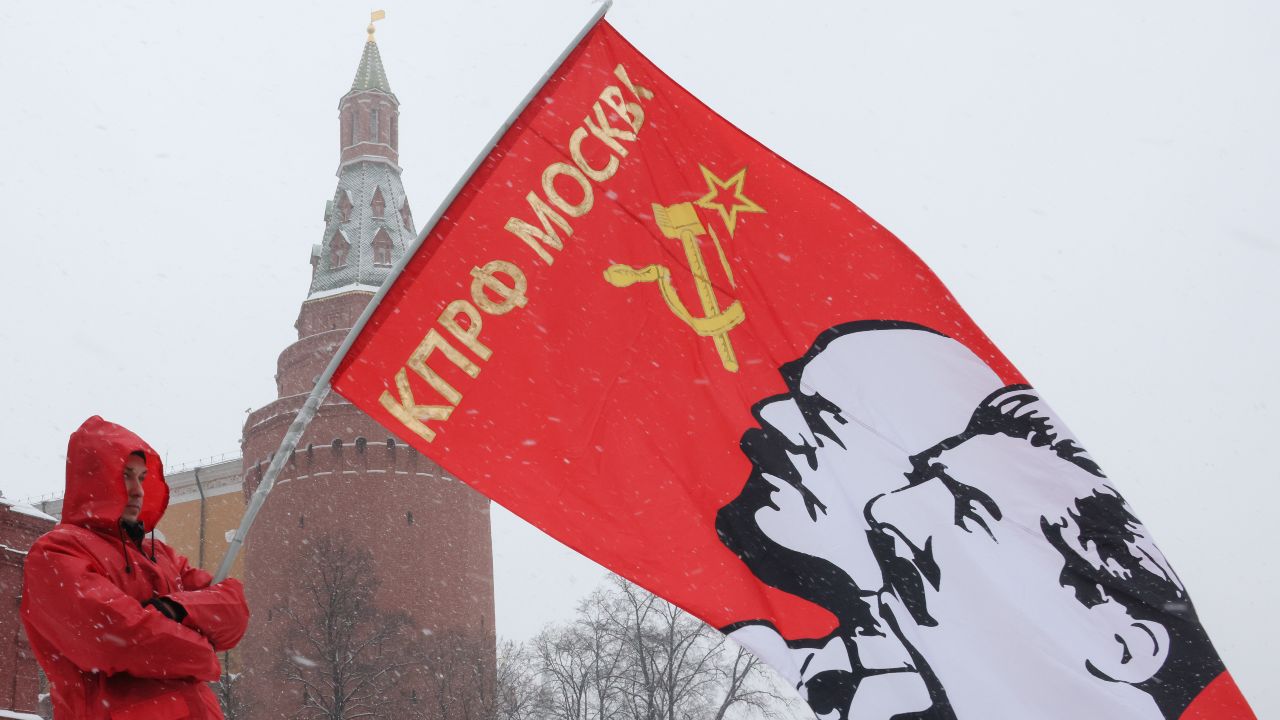 Photo: MOSCOW, RUSSIA - JANUARY 21, 2022: A man waves a KPRF (Russian Communist Party) banner during a flower laying ceremony held at the Mausoleum to mark Vladimir Lenin's 98th death anniversary. Born in Simbirsk (present-day Ulyanovsk) in 1870 as Vladimir Ulyanov, Lenin was a revolutionary and politician known as the founder of the Russian Communist Party. Credit: Mikhail Metzel/TASS

It is a very human trait to look back on the past with a certain sense of longing, and perhaps with a melancholy ache for what has been lost. Few however would have the audacity or the desire to turn the clock back.

However warped, that is very clearly the aim of President Vladimir Putin, who perhaps not coincidentally turns 70 this year. Over time, he has voiced an inner rage at the collapse of the Soviet Union, describing it as “the greatest geopolitical catastrophe of the century.” He was referring to the same Soviet Union that mirthlessly engaged in repression, both foreign and domestic, closed itself off from the outside world behind an Iron Curtain also designed to keep its people prisoner and which threatened the world with obliteration for anyone with the temerity to challenge its foreign adventures. A society of paranoia, food shortages, poverty, with a brainwashing state media, and a ruthless KGB silencing anyone questioning the state.

If the world thought all this passed with the demise of the Soviet Union in 1991, they were not reckoning with Putin, who for 22 years has been laying the groundwork for a return to his good old days. In a matter of weeks, he has escalated toward a new Iron Curtain and a new Cold War. His more skeptical opponents might even argue the old Cold War never entirely ended.

Since February 24, Putin has launched Europe’s most significant war since 1945; has taken draconian measures to choke the remains of Russia’s free media; has brought down on his country unprecedented and ever-increasing sanctions; forcing some Russians to rush for the last Western products at outlets like IKEA and others to chase even basic necessities like salt and sugar; has caused a recession unseen in scale since the disastrous collapse of 1991, with the main difference being the West was there to help rebuild; and caused the oligarchs who propped up and acted as proxies for his regime to have their yachts and other assets seized, and their Western playgrounds placed off limits. McDonald’s, that high-calorific symbol of Western integration, has shuttered its 850 stores and Russia is now banned from most major sporting competitions.

It is an incredible achievement: in less than a month, Putin and his regime allies have made Russia into a pariah state, while failing utterly to gain the swift military victory which his corrupt spies, who got fat by stealing the funds designed to weaken democratic Ukraine, told him would be achieved.

Russia’s chained media does not reflect this disaster. Domestic audiences are told that the “special military operation” is a success, while making inflated claims of Ukrainian military losses and broadcasting fantastical accounts of supposed Nazi atrocities. Images of the bombed maternity hospital in Mariupol or the destruction of a theater sheltering civilians, are not shown. Instead, Russian state media accuses Ukraine of bombing its own people, and began a smear campaign suggesting that one of the pregnant women seen in photos was a blogger staging this event.

Meanwhile, there is a continual drumbeat of evidence-free stories suggesting that Ukraine, the US, or some other enemy is preparing chemical attacks and the rigging of nuclear facilities, to create a radioactive disaster. Russia continues to share baseless stories that the US is running secret bio labs, a theme now embraced by China, which has long suggested that the coronavirus pandemic began at a lab in Maryland rather than Wuhan. Russians are encouraged to embrace the “Z” signs painted on their invading vehicles and can now be seen on buildings, videos, and around the country. Pre-schoolers and kindergarten children, with a little help from state security services, pledge their support for Russia’s campaign in staged photos holding Z symbols.

All the same, under the perpetual sound of churning from the machinery of the organized state media, there is clear dissatisfaction at the top with the course of events. The signals are that Putin feels that despite his control of every lever of power and his now obvious status as a dictator, things are not going according to plan.

There have been reports of high-level officials and an FSB directorate being interrogated and placed under house arrest, while in true Stalinesque fashion, Putin delivered bizarre comments while holding a Zoom meeting announcing the preparations of the “cleansing” of those offering him insufficient support. “The Russian people will always be able to distinguish true patriots from scum and traitors and simply spit them out like a fly that accidentally flew into the mouth. I am convinced that such a natural and necessary cleansing of society will only strengthen our country.”

Putin continued with his indirect attack on oligarchs who have long enjoyed the luxuries of the West. “The West will try to rely on the so-called fifth column, on national traitors, on those who earn money here with us but live there. And I mean ‘live there’ not even in the geographical sense of the word, but according to their thoughts, their slave consciousness,” Putin said. “Such people who by their very nature, are mentally located there, and not here, are not with our people, not with Russia,” Putin said, mocking them as the type that “cannot live without oysters and gender freedom.”

Rattled by the West’s so unexpectedly fierce and united response, Putin is now falling back on tried and trusted threats that in the past have shaken the resolve of democratic consumer societies. There are constant menacing references to Russia’s large nuclear arsenal.

NATO meanwhile, quietly continues to funnel troops and equipment to the likely new line of confrontation. Reinforcements have arrived in the three Baltic states and Poland; new deployments are being established in Slovakia, Romania, and Bulgaria. Only Hungary stands out as not yet having accepted alliance forces. More personnel and material are on the way.

Whatever Western leaders say about their hopes of talking Putin down, or offering an “off ramp” so that he can declare his defeat a victory, the hard decisions are already being taken.

Popular opinion has hardened. Some 80% of US voters think a wider European war is likely, 74% want a NATO-imposed no-fly zone, while 68% of Germans back further troop deployments to central and eastern Europe, and 80% back their government’s tough response or want it to go further.

The stakes couldn’t be higher for the security of Europe and the West, and it seems that Western voters grasp the seriousness of the situation. Perhaps some have heard Kremlin mouthpieces expressing a desire to spread the war further west.

Western public opinion may now be ahead of its cautious leadership in wanting well-considered action. At the NATO emergency summit on March 24, it has the opportunity to meet those expectations and do what it was established to do — confront the enemy of a free Europe.