When Russia’s government machine cannot deliver, Vladimir Putin is increasingly reliant on a tried and trusted fixer to do the job. 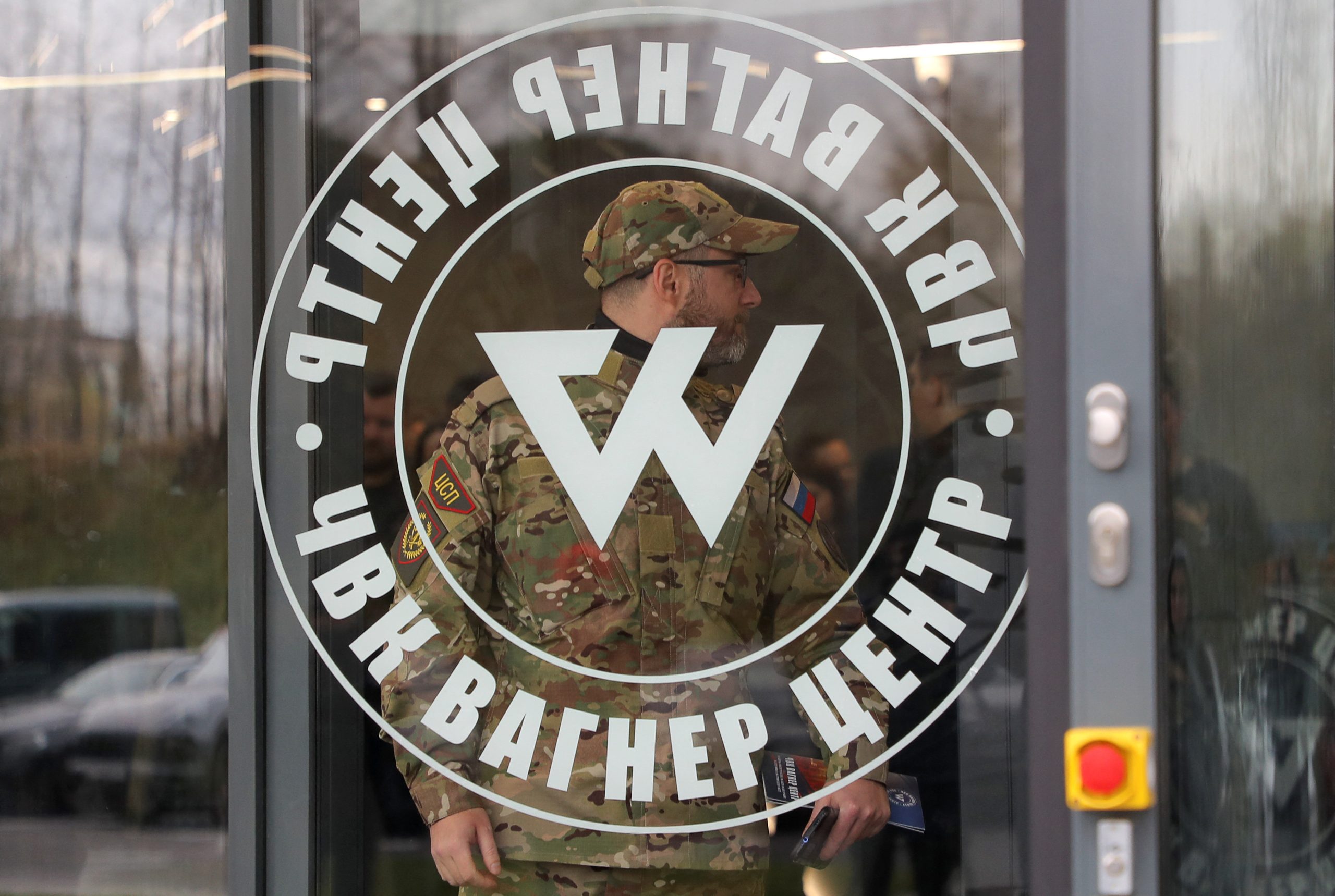 Photo: A man wearing a camouflage uniform walks out of PMC Wagner Centre, which is a project implemented by the businessman and founder of the Wagner private military group Evgeny Prigozhin, during the official opening of the office block in Saint Petersburg, Russia, November 4, 2022. Credit: REUTERS/Igor Russak

The grand opening of the private military company (PMC) Wagner center in St Petersburg by Evgeny Prigozhin, a mercenary company leader and Soviet-era convict, came as a shock to many in the country and abroad. For years, lawyers acting for Prigozhin launched legal cases against Russian independent journalists for trying to establish the link between 61-year-old Prigozhin and Wagner.

That’s all changed — the name WAGNER is now plastered all over the glitzy 24-floor building on the right bank of Neva river. Indeed, several uniformed men wearing the infamous Wagner insignia were spotted by journalists at the entrance.

But while Wagner is known for its bloody mercenary activities around the world — in Ukraine, across the African continent, for its alleged involvement in the massacre of Malians and others — the center is not supposed to be the HQ of the most famous Russian military company, or at least, not only that.

“PMC Wagner Center is a complex of buildings that provides space and free accommodation of inventors, designers, IT specialists, experimental production and start-up spaces,” Prigozhin said in a statement distributed by his company.

This raised eyebrows. Putin’s Chef is known for many things — for his criminal record, for wealth derived from Kremlin catering contracts, for his notorious troll factory, his private military company, which exchanges armed muscle to authoritarians willing to pay in diamonds, gold, oil, and other resources, and lately for recruiting convicted criminals directly from Russian prisons for the war in Ukraine. But IT start-ups? That appears to be the planned new offshoot for Prigozhin’s relentless expansionism.

Perhaps Prigozhin’s greatest talent is in identifying the Kremlin’s weak spots and rushing to fix them, no matter how controversial, bloody, dirty, or illegal. That is what makes him so indispensable to Putin.

When the Russian army found itself on the defensive in Ukraine, only PMC Wagner took the offensive. When the national mobilization effort felt ill-coordinated, it was Prigozhin who unhesitatingly raced to the Russian penal colonies, in person, and on film, so everyone could see him recruiting cannon fodder for the Kremlin’s war.

And when the Kremlin was desperate to find a public way to thumb its nose at the Biden administration, which has provided the military means for Ukraine’s stout defense, it was Prigozhin who stepped up to claim credit for the interference in US elections that he and his master have always denied (and to promise that he will do it again.)

“We have interfered [in US elections], we are interfering and we will continue to interfere,” he said through one of his companies. “Carefully, accurately, surgically, and in our own way, as we know how to do.”

The Kremlin’s current vulnerability is IT. First, it has lost control of the Internet because of an overwhelming, citizen-generated flood of bad news about mobilization — videos of angry recruits protesting a lack of ammunition and food have gone viral. Second, it is suffering shortages of IT equipment across the government sector. Prigozhin again rushed to help — on October 30, he demanded that the General Prosecutor block YouTube in Russia. And now, as ever, Prigozhin the fixer indicates he is eager to help end the digital technology shortages.

It looks very much like a tactical move, prompted by unfolding events. In fact, Prigozhin’s move seems well-prepared.

One of the guests at the opening of the Center was Ruslan Ostashko, an ultra-patriotic TV host and propagandist but also a member of the board at the Internet Initiatives Development Fund (IIDF.) The fund is essentially a state-financed venture capital firm and is one of Putin’s pet projects. When launched in 2013, it was meant to provide competition to the much-publicized (and dismally unsuccessful) Skolkovo project with its relatively liberal, outward-looking agenda, supported by Dmitry Medvedev when he was president.

Ever since, the IIDF has been led by Kirill Varlamov, a former engineer from Ekaterinburg who is very much Putin’s idea of what a proper Internet entrepreneur should look like; a member of the All-Russia People’s Front, unquestioningly loyal to Putin, and with no reputation or business experience outside government-funded projects.

The Fund via its partner, the Institute for Development of Internet (IRI), was tasked to help startups in areas from the Internet to medicine and education. Unlike Skolkovo’s startups, most of the Fund’s projects were required to be ideologically motivated. Last year, the government provided 15bn rubles ($250m) for the development of 200 “patriotic” projects, including TV series, computer games, and software.

Now Prigozhin has spotted an opening to promote his interests.

In October, the IRI approved funding for the development of a computer game called Sparta. The game is based on the activities of a private military company, which in the Russian mind can mean no company other than Wagner.

The plot contains a very clear message — brave mercenaries fighting “the evil” in an unnamed African country. As the game developers explained, the scenes will be close to the realities of modern warfare with artillery and drones. It was also made known that some people engaged in the game script development had participated in the war conflict in Syria, which is where Prigozin’s Wagner fought for years.

Thus, when Prigozhin announced his plans to give free office space to tech startups, his business empire was already exploiting a government fund to promote his private military company. And his plans are ambitious — his friend Ostashko has already been asked to open a regional branch of Prigozhin’s center in Sevastopol to host local IT startups in Crimea. The fortunes of the Putin-led regime and Prigozhin’s private company remain in lockstep.