Putin Gambles on Winter and Orbán

By ordering military mobilization, in parallel with sham referendums in Ukraine, Vladimir Putin is taking an enormous risk. 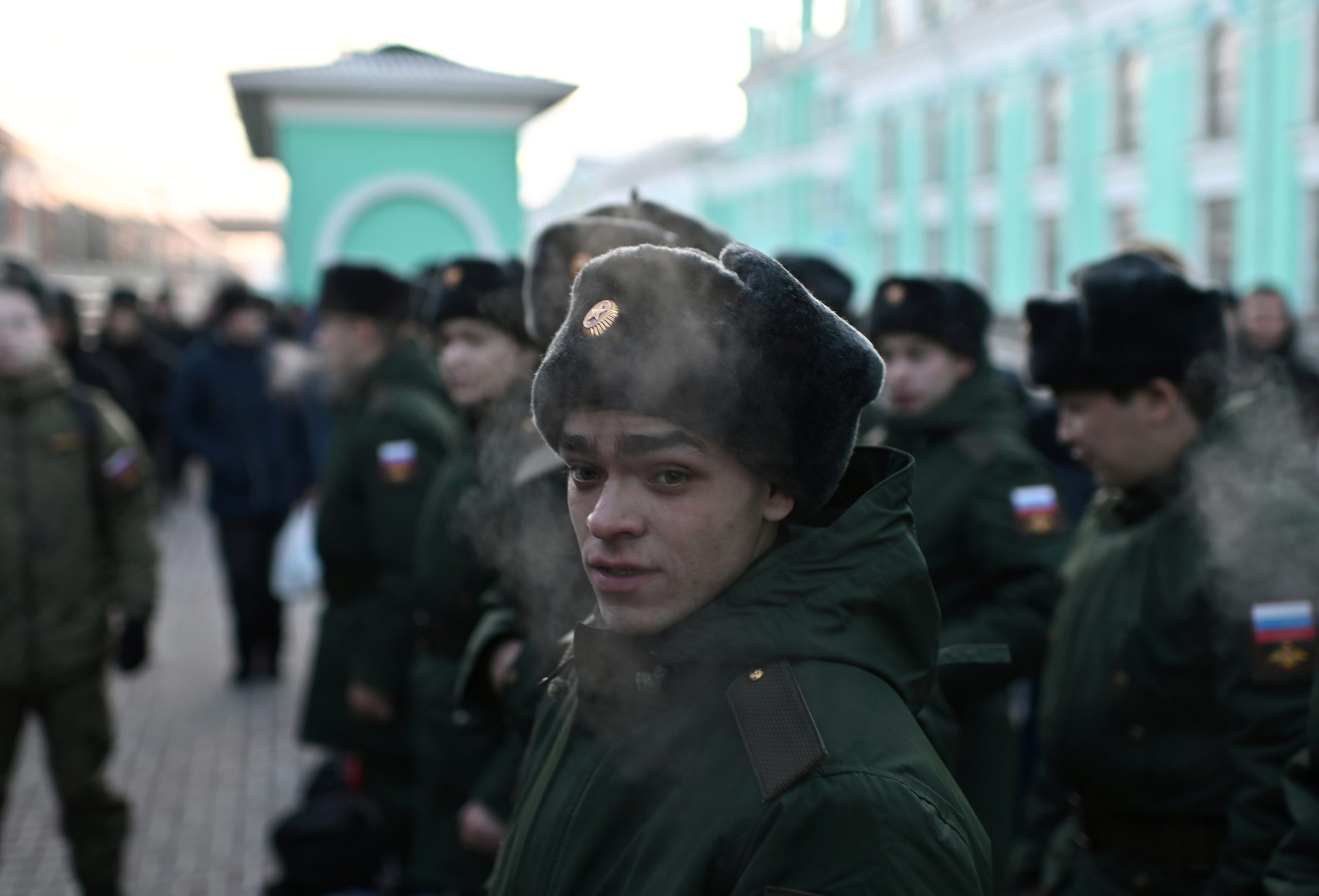 Photo: Russian conscripts, wearing military uniforms, are seen at a local railway station before the departure for the garrisons in Omsk, Russia November 21, 2019. Credit: REUTERS/Alexey Malgavko

Even if the president is outsourcing responsibility for unpopular policies to his governors, as happened during the coronavirus pandemic, Russia’s system of governance was not built for coercion on this scale when the stakes are this high. Yet the political machinery, dazed and high on seven months of war propaganda, presses ahead.

There have been chaotic, bitter, and increasingly violent protests against what many see as indiscriminate or at least arbitrary conscription. In the North Caucasian republic of Dagestan, locals are challenging law enforcement with increasing boldness, while radical Telegram channels called on them, and the residents of other regions, to burn military and administrative buildings.

In neighboring Chechnya, the region’s head, Ramzan Kadyrov, U-turned days after demands for mobilization. After a protest started in Grozny, the capital, he advised members of the security forces and law enforcement to mobilize themselves instead. Tumultuous scenes were reported in several other regions, including Yakutia and Omsk.

Everything we know about Putin’s mobilization suggests a desperate, last-ditch effort to make up military numbers. Draftees will reportedly be sent to the front after two or three weeks of rudimentary training and with inadequate equipment. In spite of the publication of regional quotas, it is unclear how many will go, but economists Oleg Itskhoki and Maxim Mironov estimate a 60%-70% casualty rate among conscripts in the first six months.

And it’s not just lives, the economic costs are also clear. Due to major uncertainties triggered by the campaign, Russia’s fiscal plans for 2023-25, only presented on September 22, are already as good as scrap paper; revenue and expense forecasts are largely fictitious.

These enormous risks appear to be the price Putin has chosen to pay for something he and his entourage still think will turn the war in their favor: time.

The Kremlin’s efforts to weaken the  European Union’s (EU) support for sanctions and military aid using energy blackmail have so far failed. A harsh winter could still cause enormous problems, but European gas storage reached its desired level two months before the stated deadline, and Gazprom faces a near-total loss of its European markets — and much of its future export revenue — as buyers seek long-term contracts with reliable suppliers.

Putin’s hopes now hinge on the winds of winter — and on two EU member states: Hungary and Italy.

Hungary’s prime minister, Viktor Orbán, the closest thing Putin has to an ally among EU leaders, has gradually but unswervingly ramped up his rhetoric attacking the Ukrainian government and sanctions on Russia.

His media conglomerate never really stopped spreading the Kremlin’s narratives about the war, but some recent examples show how radically pro-Putin the rhetoric has become. An article in the government mouthpiece Magyar Nemzet, for instance, called Russia a “more honest partner” than Hungary’s EU and NATO allies.

Orbán, who reportedly forecast the end of the EU before 2030 in a speech to his allies last month, is now openly talking about the necessity of preventing an extension of EU sanctions for another six months when it comes up for renewal in the fall.

His government will use a “survey” to spearhead a propaganda campaign that is already hammering the message that Hungarians must support ending sanctions if they want cheaper energy prices and lower inflation. It is a disingenuous suggestion, since Hungary’s gas and oil shipments are not sanctioned yet, even as its inflation rate is among the worst in the EU. Not for the first time, his brinkmanship is likely linked to money, particularly the ending of procedures that currently block access to EU funds his government relies on.

In his closed-door speech last month, Orbán was also open about his hopes the new Italian government will help torpedo the extension of sanctions. The Hungarian prime minister has been cultivating Giorgia Meloni, leader of the illiberal Brothers of Italy party, as an ally for years and will be emboldened by her success in the September 25 election.

While Meloni has been personally supportive of Ukraine, recent events suggest her supporters are lukewarm at best, and the issue is not crucially important to her. In any case, she will have to govern in coalition with the parties of Matteo Salvini, one of the foremost European fans of the Russian president, and Silvio Berlusconi, another politician who can be considered a Putin ally. If push comes to shove for Meloni, it may be that she won’t risk her majority in parliament over Ukraine.

While Orbán alone is not a sufficiently formidable force to prevent the extension of sanctions, having a much larger EU member on his side during a period of economic downturn could tip the scales.

EU leaders should be ready to ensure this does not happen, and be ready to negotiate with Italy’s new government to ensure its continued support for sanctions. While a compromise with any illiberal government may seem like an unsavory prospect, Italy at this point is still a functioning democracy with institutions that guarantee the rule of law.

To raise the costs for Putin, the EU should encourage draft dodging and desertion among conscripts and find a practical solution to relieve the pressure on overwhelmed asylum and immigration systems in Russia’s neighbors. They should also ensure Russians continue to have access to information about the real state of the war — many may be more willing to listen now the conflict has suddenly come home to their families and friends.

Most importantly, EU states should increase the delivery of weapons to Ukraine now. One thing has not changed: the fastest way to end the war and Putin’s threats is to help Ukraine win.

András Tóth-Czifra is a Non-Resident Fellow at the Center for European Policy Analysis (CEPA.) He is a political analyst from Hungary, based in New York City.