What it means and why it matters The replacement of Polish Prime Minister Beata Szydlo indicates that Warsaw is refocusing its efforts on improving the country’s international standing at a time of turmoil in the European Union. The new premier, Mateusz Morawiecki, a former banker and economist, has served both as minister of development and […] 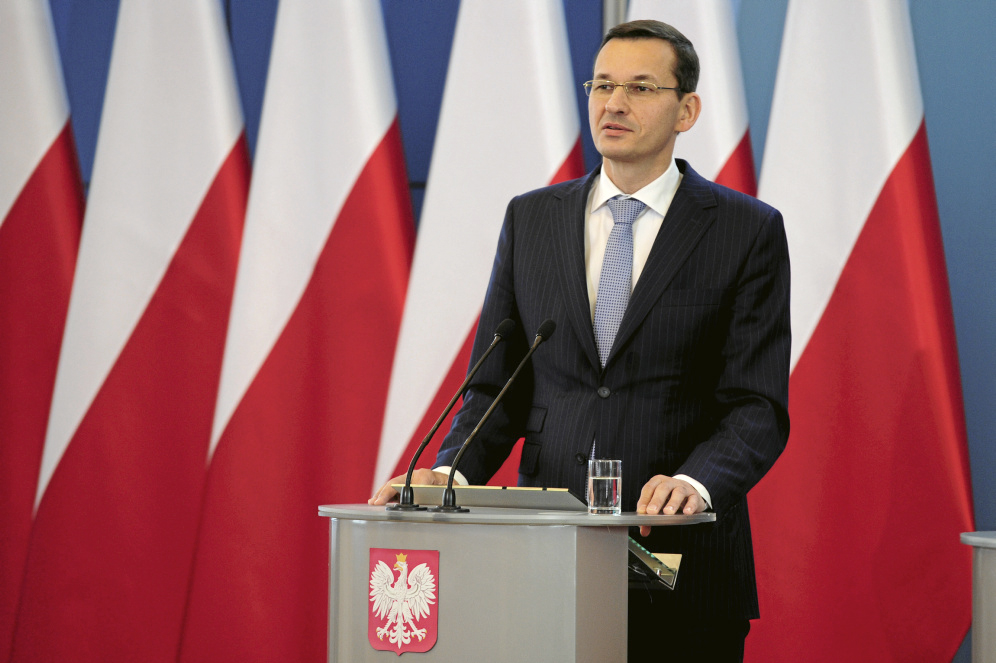 What it means and why it matters

The replacement of Polish Prime Minister Beata Szydlo indicates that Warsaw is refocusing its efforts on improving the country’s international standing at a time of turmoil in the European Union. The new premier, Mateusz Morawiecki, a former banker and economist, has served both as minister of development and minister of finance. His business-friendly international reputation could prove a net benefit for Poland.

The change in leadership will not affect Poland’s strong commitments to NATO and Atlanticism. Morawiecki is the son of veteran anti-communist activist Kornel Morawiecki, who established the Fighting Solidarity underground movement during martial law in the 1980s and now leads the Free Solidarity party in parliament. Mateusz studied at Northwestern University’s Kellogg School of Management in Illinois, speaks fluent English, understands the vital importance of the American-led alliance, and is attuned to the persistent threats from Moscow.

The new prime minister also possesses strong European credentials. He was deputy director of the Accession Negotiations Department in the Committee for European Integration, oversaw talks on Poland’s EU entry, and served as an adviser to current EU Council President Donald Tusk. He understands the intricacies of EU policies and procedures, and his appointment signals a new outreach to EU partners.

Warsaw clearly does not want to be sidelined in Europe as a result of its domestic politics. The government has faced criticism from Brussels for passing laws that give parliament greater influence over the Supreme Court and a key judicial body that nominates judges, the National Judiciary Council. Another source of tension with the European Commission (EC) revolves around the refusal of Poland, Hungary, and the Czech Republic to welcome asylum seekers from the Middle East. The EC is planning to sue the three states at the European Court of Justice for violating their legal obligations regarding relocation quotas. All three governments contend that EU law violates national sovereignty and is fueling nationalist sentiments.

As prime minister, Morawiecki may prove more capable than his predecessor in negotiating with European partners. Moreover, he is expected to reassure financial markets about Poland’s commitment to EU membership, as he is neither a populist nor protectionist—unlike some members of the ruling Law and Justice (PiS) party.

Domestically, PiS remains popular as the economy continues to grow. As finance minister, Morawiecki contributed to several positive, popular developments, including record low unemployment of about 7 percent, rising wages, and annual GDP growth of over 4 percent. His “Plan for Responsible Development” stimulated economic growth and raised revenues to fund the government’s social spending, including the “Family 500+” program of child benefits to all families with two or more children.

Although PiS leader Jaroslaw Kaczynski is considered to be the real powerbroker behind the government, Morawiecki may seek to carve out his own autonomy, having only recently joined the ruling party. A broader government reshuffle is likely in the new year, as PiS prepares for local elections in 2018, the parliamentary ballot in 2019, and presidential elections in 2020. Local analysts forecast that Foreign Minister Witold Waszczykowski could be replaced. Complaints have persisted in government circles that he has failed to strengthen Poland’s relations with Brussels and its position inside the EU. Some claim that his one significant achievement was the visit of President Donald Trump to Warsaw in July 2017.

As with other parties, PiS continues to undergo factional power struggles. One of the most notable is between Defense Minister Antoni Macierewicz and Poland’s president, Andrzej Duda, particularly over military appointments and control over Poland’s armed forces. Tensions between Duda and the PiS leadership were also evident in the passage of legislation on judicial reform, which the president initially blocked and subsequently amended. In this swirling political climate, Morawiecki’s appointment may help steady the government and generate greater effectiveness in Warsaw’s European outreach.