While Kremlin propaganda calls on Russians to sacrifice their lives for their country – or at least for a new car or mobile phone – not everyone buys into the state’s celebration of death. 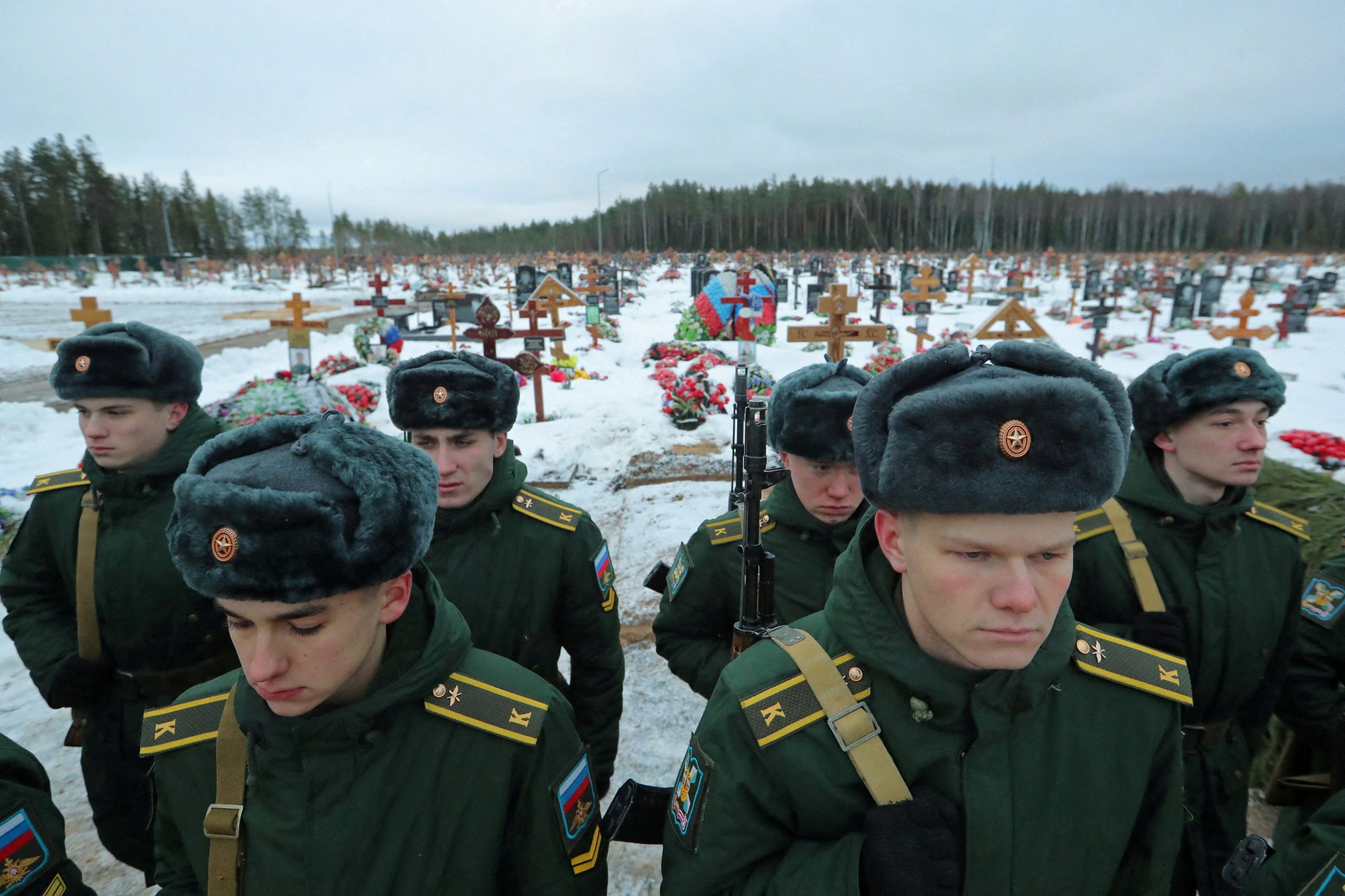 Photo: Cadets of a military academy attend the funeral of Dmitry Menshikov, a mercenary for the private Russian military company Wagner Group, killed during the military conflict in Ukraine, in the Alley of Heroes at a cemetery in Saint Petersburg, Russia December 24, 2022. Credit: REUTERS/Igor Russak

Ever since Russia’s invasion of Ukraine, justifications for the war have changed as the quick victory promised by Vladimir Putin failed to materialize.

The celebration of death has taken on a growing role. In fairness, some religious preachers ploughed this furrow from the outset, assuring their audience that Russians can “become themselves” only by killing, and that “all God’s creation” is at stake in Ukraine.

Following the example of church leaders, secular propagandists picked up this quasi-religious justification for the war. The Kremlin’s most notorious mouthpiece, the ever-exasperated Vladimir Solovyov used his national TV show to tell viewers that life is “greatly overrated” and they should not be afraid of death because, according to Putin, they will go to heaven. “Live for something you can die for,” Solovyov said.

In this version, Russians are not told to embrace death to build a “bright future”, but to seek it as the only thing that gives meaning to existence. Political scientist Fyodor Biryukov wrote in the Nezygar Telegram channel, which is close to Putin’s administration, that society is “much more patriotic than the government.”

“The ruling class demands from its subjects a willingness to sacrifice themselves without hesitation and regret, without asking unnecessary questions, without doubting the correctness of the authorities,” he wrote. “Loyalty and patriotism in the Russian Federation have been reduced to feelings of doom and obedience to superiors. ‘Ave, Caesar! Those who are about to die greet you!’ — this is the motto that the current Russian elites want to put into the minds and hearts of the population.”

While even the most terrible ideologies of the 20th century had an internal logic that formed a picture of the world and an image of the future, the current Russian ideology relies on images and emotions without a coherent structure or vision. It’s not capable of serving as a long-term foundation for society, but even so, some people under its influence are clearly prepared to sacrifice their lives.

The exact number of those who are really ready to die is impossible to establish, and the motivations of the individuals going to war vary enormously. In April, Russian sociologists conducted in-depth interviews with war supporters, which allowed them to create five categories. Three of the groups unconditionally supported the war, including those who consume state propaganda, hardline imperialists, and people personally connected with Donbas and previously drawn into the “logic of war”.

The other two categories are more controversial. The authors described one of them as “involuntary supporters of the war,” that is, people who would prefer there was no war, but have since justified it to themselves. The other category was support “in spite of”, which included those who, in principle, did not back the war but believed they must remain loyal to the state.

Over recent months, it appears the readiness of those in the first three categories to die has stayed the same or slightly decreased. This may be caused by the most “patriotically charged” Russians often hearing about defeats at the front first-hand, from volunteers they personally know or correspondents they trust. Research by the Dossier investigative center shows the most staunch supporters of the war are showing an increase in anxiety and fear.

Even so, it seems the willingness to accept death has increased among the last two categories. One of the motives is a desire to protect Russia, regardless of who is to blame for starting the war. This is often reinforced by scaremongering from propagandists that the country will be destroyed in case of defeat.

Underlying all of this is uncritical obedience to the state which has been drummed into generations of Russians. There is too a sense of helplessness — psychologists working with the mobilized noted that many reluctant draftees went to the front anyway because it was simply too difficult to disobey the orders of authority and ignore public opinion.

Others are prepared to risk death for financial reasons, wanting to earn money and solve their family’s everyday problems. Such decisions are encouraged by propaganda, including a whole series of commercials on Russian TV, which show characters signing contracts with the army to buy a car, give their daughter a brand-new phone, or simply avoid being bored into alcoholism.

Considering that the standard of living in Russia continues to fall, and the army is fast becoming the only route to an improved social position (including the nomination of former soldiers to run for election), it’s likely the numbers of the financially motivated will grow.

That’s not to say the cult of death has succeeded, at least so far, in convincing the whole of Russian society, which, before the war, aspired to a calm and prosperous life. After all, Putin’s initial social contract with the Russian people could be formulated as “income growth and stability in exchange for the renunciation of civil and political rights.”

The extent of the president’s failure to deliver on that promise was clear in April, after the invasion, when psychologists said the number of Russians worried about their future was off the scale, and many people who were used to a normal life regarded its collapse as a tragedy.

While more recent research suggests some improvement in people’s fears about everyday life, even sociologists loyal to the Kremlin point out this is due to a temporary phenomenon of substitution, when ordinary concerns fade into the background compared to the war.

The dream of most Russians for order and stability, rather than the current chaos and uncertainty, gives reason for hope. In the meantime though, the Kremlin will continue to sharpen propaganda to transform Russians into a people with a love of death; a people for whom murder and death are the purposes of life.