Discontent among Russian mercenaries reflects a wider loss of support for Vladimir Putin’s war among the army, civilians, and ultranationalists. 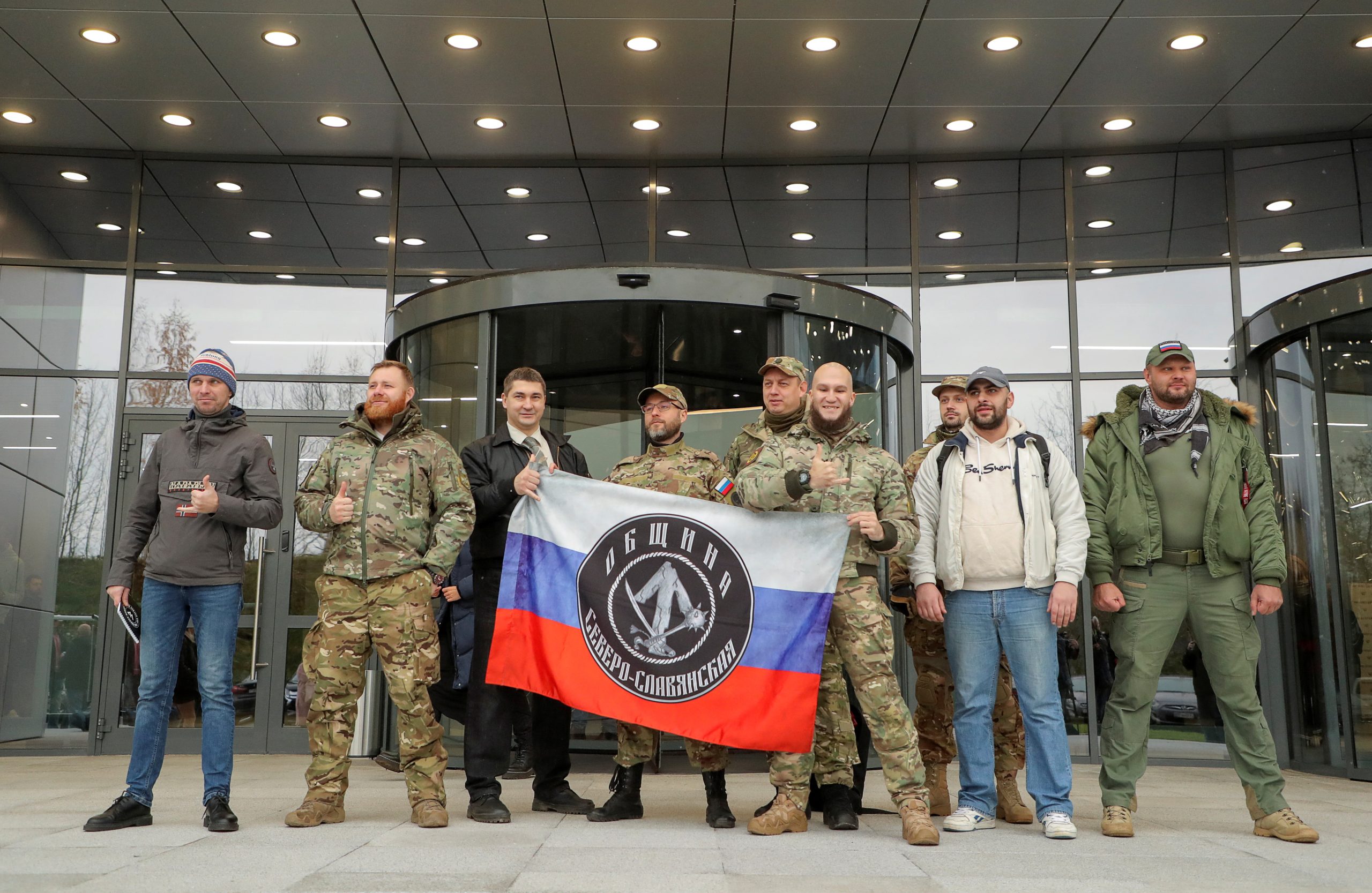 Photo: Visitors pose for a picture outside PMC Wagner Centre, which is a project implemented by the businessman and founder of the Wagner private military group Yevgeny Prigozhin, during the official opening of the office block in Saint Petersburg, Russia, November 4, 2022. Credit: REUTERS/Igor Russak

A convict recruited directly from prison by the Wagner mercenary organization to fight in Ukraine has asked human rights activists to help him return to prison, according to Vladimir Osechkin, who leads the Gulagu.Net organization. The soldier-criminal is one of “many” deserters and disaffected seeking to escape life-shortening stints at the front.

The fact that prisoners have turned to him to extricate themselves is another piece of evidence that, despite the growth in the prominence of Wagner’s founder, the Soviet-era convict Yevgeniy Prigozhin, and the creation in Russian society of a cult of “Wagnerites,” the mercenary group is a “colossus with feet of clay,” according to Osechkin, whose group has a long record of exposing abuse in the notoriously brutal Russian prison system.

That Prigozhin’s influence is rising is clear. He recently berated Vladimir Putin over the war’s conduct, according to US officials, and his group has displaced the Russian regular army to lead the bloody, but strategically baffling, assault on the Ukrainian city of Bakhmut. Losses in so-called meat grinder assaults are said to be enormous, especially among convicts whose role is to reveal Ukrainian positions by advancing to draw their fire. The dead are often left on the battlefield, while deserters are shot. Such ruthlessness has caused Wagner to be described as “the Kremlin’s premier strike force.”

Unsurprisingly, morale among the group’s soldiers is falling, while the number of deserters and others refusing to fight is rising. Osechkin says it’s precisely for this reason that the frequency of extrajudicial executions and other types of reprisals against “rebels” inside the Wagner organization are growing. “The fact they have resorted to such a serious level of force within their structure is testimony that no other form of motivation is working,” he said.

As an example, Osechkin cited the story of Andrei Medvedev, a former Wagner soldier with the callsign “Joga,” who decided to publicly withdraw from the organization. According to the human rights activist, operatives from the Ministry of Internal Affairs and the FSB have now joined a hunt for him at Prigozhin’s request.

Osechkin, now based in Paris, who founded his project to highlight the torture and other abuse in Russian penal colonies in 2011, is a well-known defender of the rights of inmates and has a wide network of informants inside the prison system. This gives him a unique insight into Wagner’s recruitment and retention of fighters, and a direct line to people within the organization. Wagner defectors have been in contact with him and his organization ever since the beginning of the invasion in February. Osechkin says he survived an attempted assassination in Biarritz earlier this year.

The waning appeal of the organization among prisoners was confirmed by Paul Whelan, an American who is serving a sentence in a Russian colony on espionage charges, which he denies. According to Whelan, in a message relayed to the media by his brother David, Wagner was only able to sign up eight people in its most recent recruitment visit to the colony where he is imprisoned, compared to 115 last time.

Wagner is not the only organization suffering a decline in morale. According to Igor Girkin, an extreme Russian nationalist who helped start the war in Donbas in 2014 by organizing separatist militias, a comparable situation exists in the regular army. “The soldiers are fighting ‘by inertia,’ without the least understanding of the ultimate strategic goals of the military campaign,” Girkin wrote on Telegram, adding that “apathy reigns among the troops.”

As for society as a whole, while sociologists loyal to the Kremlin report that “a very high level of support for the leadership of the country remains, and an absolute majority of Russians see no alternative in terms of geopolitical confrontation,” there is increasing evidence to the contrary.

For example, the results of two focus groups with supporters of the war, commissioned by the Kremlin in July and November, and examined by the Dossier research center, showed signs of discontent even among “radical patriot” respondents hand-picked for their pro-communist, right-conservative, and loyalist views.

They were in a state of heavy stress and tension even during the summer, the study found. The main factor contributing to their dissatisfaction was the prolongation of the “special military operation,” although they remained resolute and aggressive. By November, following the Ukrainian counter-offensive, partial mobilization, and the loss of a great deal of formerly occupied territory, fear for the future replaced the aggressive mood.

Some were so disillusioned with the Russian Army that they even told researchers they were ready to return Crimea to Ukraine to end the war. Many were dismayed by the announced mobilization and the shelling of Russian territory.

There is another indicator showing that Russian society, for all its conformism, is uneasy about the conflict. The number of people seeking psychiatric help rose by more than a quarter in the first three months of the year, Russian media reported. According to family therapist Yekaterina Koseikina, about 80% were complaining of chronic stress and increased anxiety, as well as various anxiety disorders and panic attacks.

The rise is particularly remarkable because Russian culture traditionally stigmatizes people with mental health problems, and many people avoid turning to psychiatrists for fear of being labeled as “sick”, or imitators of American culture. Such treatment is anyway unaffordable for most. Only 25% of Russians say they would even consider seeking help from a psychiatrist, suggesting the true level of distress in wider society may be several times higher.

Proof of this can be seen in the sharp growth in demand for antidepressants, tranquilizers, and anti-psychotic drugs this year. The biggest surge showed a 15% year-on-year rise in August and September. According to clinicians, the demand for sedatives, sleeping pills, and anti-depressants has also increased since February.

Russians are not prepared to go out and protest for fear of reprisals, and the “patriotic” element of society sincerely believes there is no other way out than to fight until victory, but the level of disillusionment and anxiety, even among the regime’s backbone support, suggests victory is seen as less and less likely. In such circumstances, the level of discontent and distrust of the authorities will continue to grow.