Kazakhstan: ‘Enlightened Authoritarianism’ Is in Flames

Kazakhs are demanding change, and while the failure of enlightened authoritarianism is a domestic issue, events are certain to reverberate. 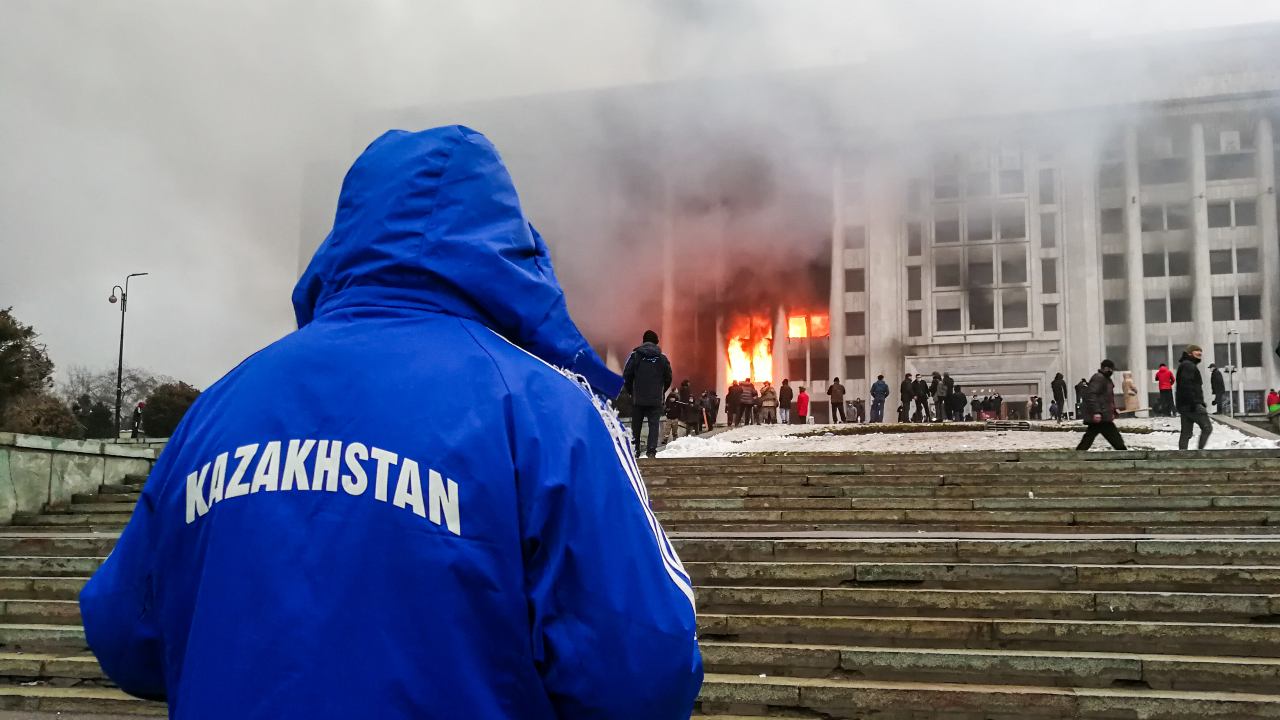 Photo: ALMATY, KAZAKHSTAN - JANUARY 5, 2022: People rally outside the burning mayor’s office. Protests are spreading across Kazakhstan over the rising fuel prices; protesters broke into the Almaty mayor’s office and set it on fire. Credit: Yerlan Dzhumayev/TASS.

Kazakhstan faces what seems at the time of writing (January 5) an attempt by its citizens to overthrow the political elite which has been running the country since independence in the early 1990s. Corruption, inefficient governance, and an over-long period in power for one group have sparked revolt, together with a sudden rise in energy prices.

Buildings were attacked, police officers were changing sides, and the outcome was confused. Last night, the Russian-dominated Collective Security Treaty Organization (CSTO) said it was sending “peacekeepers” to quell the popular protests, just hours after the Kremlin spokesman said the country needed no outside help. Such contradictory statements from the usually well-choreographed Russian government machine show events moving at breakneck speed.

The government was reported to have lost control of Almaty airport to protesters, Tass said that the presidential palace was ablaze, along with the main government administrative building. At least eight members of the security forces were dead.

Russian media swiftly attributed the uprising to the West. Blaming popular upheaval or an outright revolutionary attempt on foreign powers has been a constant in the countries that once constituted the Soviet space. The allegation, generally made by the Kremlin, is used to suggest that national populations are easily manipulated and have no grievances or aspirations of their own. Take Georgia in 2003, Ukraine in 2004 and 2013-2014, or Armenia in 2018. All those upheavals were rooted in deep social problems caused exclusively by the local context. Geopolitics was absent as a core reason.

Yet denying the wider geopolitical context of the Kazakh protests would not be entirely correct. Kazakhstan is a close Russian ally and is a member of Russia’s military alliance, CSTO, the Eurasian Economic Union, and is home to Russia’s Baikonur cosmodrome. The regularly returning revolutionary tide in Russia’s borderlands is increasingly seen by the Kremlin as a part of Western-Russia competition. What makes the Kremlin even more suspicious is the timing of the events. Protests began just before Monday’s (January 10) talks with the US on security “guarantees” a series of treaty limitations that would bind Russia’s neighbors and constrain their sovereignty.

Given Kazakhstan’s importance, the only certainty in the Russian response was that it would not be quiescent: Vladimir Putin and his officials have already worked to cause a serious security crisis by moving about 100,000 troops to Ukraine’s borders to emphasize that its neighbors cannot simply leave its orbit of influence. The Kremlin has made clear that what it has, it holds. The overturned pro-democracy vote in Belarus in 2020 showed how far they are willing to go, assisting local forces with widespread torture and repression to keep allies in power.

And the initial signs were not good. Kazakhstan’s President Kassym-Jomart Tokayev, referred to protesters as “terrorists” and asked for Russian military assistance under the CSTO treaty. And Russia was reported to have sent a “special delegation” to the country. Past experience suggests that Putin, who has proved skillful at exploiting events, will see the situation as an opportunity rather than a disaster. Expect the sudden eruption of the Kazakh revolt to form a key element of his broader Ukraine and borderlands policy.

There are other implications too. Protests could disrupt gas pipeline operations complicating the country’s role as a transit route. It could also complicate life for China’s Belt and Road Initiative, where Kazakhstan is a big player. Neighboring Kyrgyzstan would feel the brunt of closed transit routes as its firms will fear the revolutionary wave will impact its poor economy.

Moreover, distant Kazakhstan might have a tremendous impact on how enlightened authoritarianism is perceived around the globe. What good is a system that is so often overthrown by its citizens, its adherents might reasonably ask?

The Kazakh revolutionary movement is for the moment an inherently national movement that seeks deep social changes. Considering the country’s location and security concerns, any new government would be highly unlikely to pursue a radically different foreign policy.

This developing revolution will make pro-Russian “strongman” leaders feel they are treading an icy path. It makes the point however stable an authoritarian state might appear, it may slip and fall without warning. How confident will President Aliaksandr Lukashenka feel in Belarus as he watches the scenes unfold? And how confident can Putin feel about his own security agencies, and their ability to warn of trouble ahead?

Protests in Kazakhstan show that enlightened authoritarianism cannot work for long and that the only way to maintain them is through force. A stable epoch of a league of Eurasian authoritarian states will not be as lasting as it once seemed. This will worry China no less than Russia. It too favors the Westphalian principle of non-interference in internal affairs. But in practice, like Russia, it might find it increasingly unpalatable to allow democratization to take root in its immediate neighborhood.

Revolutions usually begin with genuine hope for change, but often end up having unfortunate geopolitical ramifications.