Democracy Wins in Armenia, For Now

Armenia’s dependence on Russia is growing, making it even more urgent for the West to support the country’s fragile institutions. 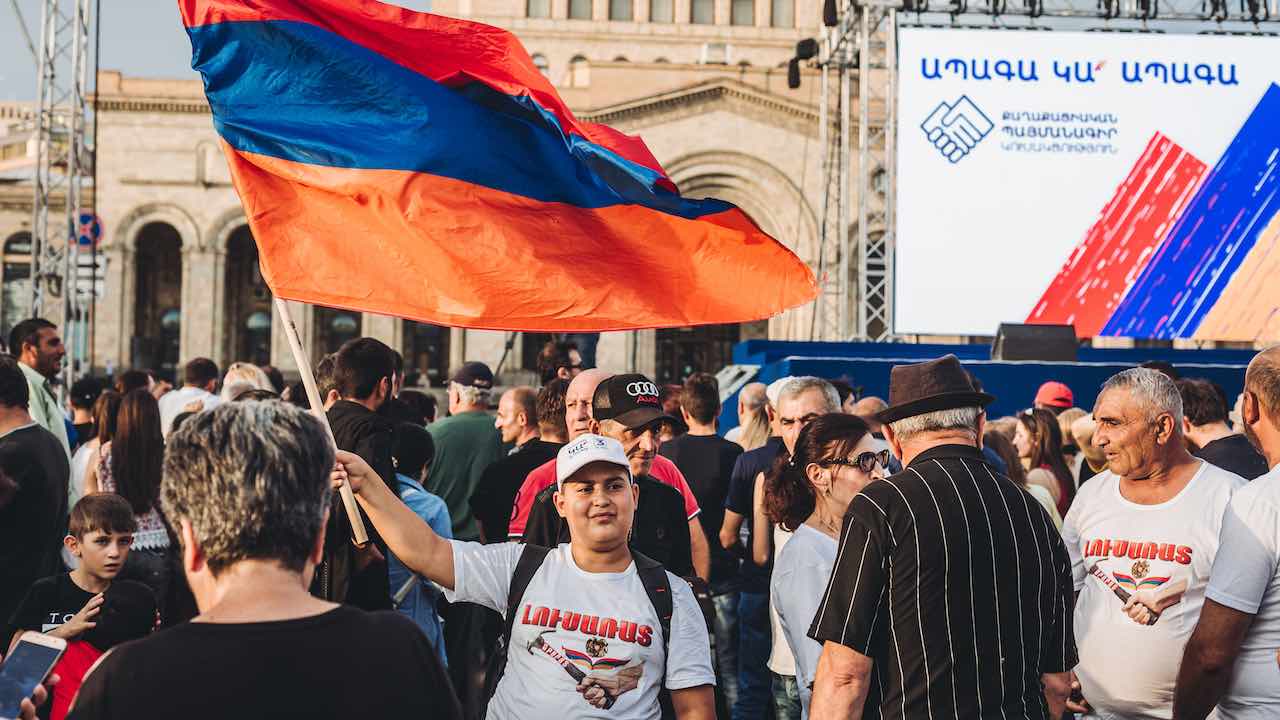 Armenia’s dependence on Russia is growing, making it even more urgent for the West to support the country’s fragile institutions.

Parliamentary elections in Armenia last month proved competitive, but the results were not that surprising. Nikol Pashinyan, the incumbent and most pro-Western candidate, won and will have a majority in the legislature.

Armenians had to choose between the corrupt officials of the past, and the democratic forces of the present. The past focused on state security and military stability. The present insisted on moving forward, transcending defeat in war, finding solutions to the social and economic problems, and bracing for a new geopolitical reality in the South Caucasus.

Pashinyan helped re-invigorate the opposition’s chances, despite his idiosyncratic style of rule based on personalized decision-making, which has undermined trust within the state bureaucracy toward his manner of governance. Parts of the army, various ministries, and even Armenia’s vibrant civil society were fundamentally divided over his behavior. And a searing military defeat caused nationwide anger.

But the election results signal that the Armenians are willing to move beyond the Nagorno-Karabakh problem. This does not mean that the general understanding of Karabakh changes within Armenian society, it just indicates that the population sees that any resolution is contingent upon resolving internal problems rooted in poor governance, and other related problems inherited from decades of corrupt rule.

Though surprisingly peaceful, the elections cannot resolve the deeper deficiencies, and shortcomings impeding Armenia’s system of governance. Problems in the justice system will persist. So will hatred and political polarization. Parliament will increasingly serve as the new arena for confrontation between the small opposition and the ruling parties, and the opposition will work to build formidable blocking mechanisms. Perhaps street protests will also become common.

Smaller parties did not make it into the legislature. The threshold of 5% popular support to win parliamentary seats barred numerous political forces. This may save Armenia from a chaotic coalition-forming nightmare, a process which so terrifies countries like the U.S. and UK, accustomed to strong presidential or parliamentary rule. But the under-representation of political forces will make it quite tempting for the ruling party to pursue political dominance — a “winner-takes-all” approach to government characteristic of politics in all three South Caucasus states. To this should be added calls from Pashinyan’s supporters to adopt more radical policies to confront the opposition.

The election is only the first step on a much more daunting path to sustainable post-war stability, and durable institutional democracy. This makes that Western support for Armenia decisive. It is true that expecting Armenia to deviate from its traditional political course is a non-starter. But at a minimum, it would be helpful to shore up Armenia’s embattled institutions at a critical time. Support for justice reforms, a more effective election process, and the battle against corruption would be welcome first steps.

Doing nothing would encourage a terrible alternative. In many ways, Russia-Armenia ties are based on the reality of a relationship between a major Eurasian illiberal state, and an aspiring democracy. Post-Soviet history very clearly shows that Russia is averse to building constructive ties with neighboring democratic states. Different worldviews usually stall relations based on equal state-to-state rights, and problems then follow. Take the examples of Georgia, Moldova, and Ukraine. Armenia has been no different.

Since 2018, when Pashinyan came to power as a result of a peaceful revolution, Armenia-Russia ties have ebbed and flowed. Russia has much more influence in Armenia than in any other neighboring state, and the drive to undermine the effectiveness of its democratic institutions will be ever-present. Liberal and illiberal states are, after all, incompatible.

But the real tragedy is that dependence on Russia will continue to grow. No viable alternative exists for Armenian governments, as the upended status quo around Karabakh leaves Armenia completely dependent on Russia. Experimenting with a multi-vector foreign policy has failed. Russia will use its superiority on many levels, justifying its open interference as merely the behavior of the great power it wishes to be. The real challenge though will not be foreign policy, but the preservation of Armenia’s fragile democratic institutions from decay. And this is the spot where the West should pump in money and attention, if it wants to make a geopolitical difference.