Communism for Russia and Conservatism for Export 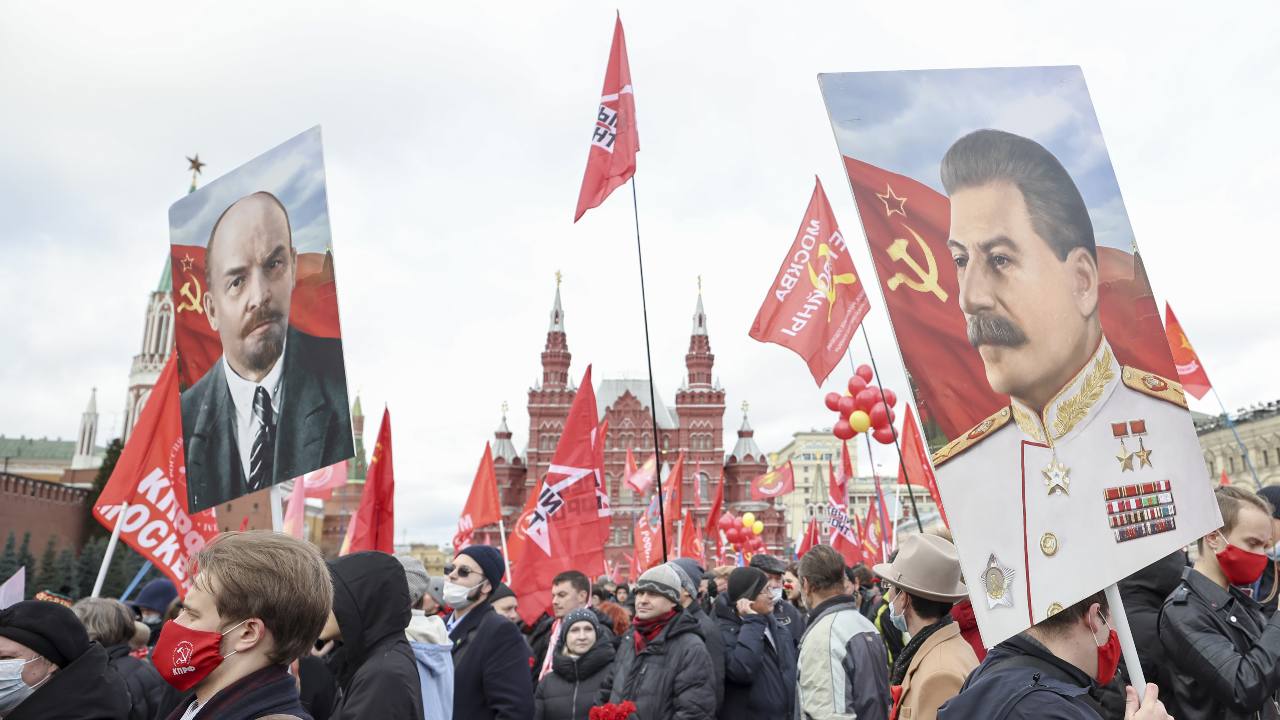 Photo: MOSCOW, RUSSIA - NOVEMBER 7, 2021: Supporters of the Russian Communist Party take part in a flower and wreath laying ceremony by Lenin's Mausoleum in Red Square and a memorial complex to Heroes of the Revolution by the Kremlin Wall, to mark the104th anniversary of the 1917 October Revolution. Credit: Mikhail Tereshchenko/TASS

A month has passed since the meeting of the Valdai Club, and Russian propagandists and pro-regime experts continue to discuss Putin’s “new Russian ideology.” Defined as “reasonable conservatism,” Russia applauds this as an “international breakthrough” and an alternative to contemporary Western liberal values.

In fact, the breakthrough is based on two far from new and rather contradictory Putin pronouncements. First, the president declared that Russia “will be guided by the ideology of healthy conservatism,” and second, he announced (just like the Soviets of old) the “exhaustion” of capitalism as an economic system.

On one hand, this combination reveals that Russia, lacking a real ideology, is creating ideologies for export, presenting itself as the bearer of values that are attractive to both the right (especially dissatisfied social conservatives in the West, who may feel abandoned by their governments) and to its traditionally sympathetic audience on the left. However, it’s important to understand that the criticism of capitalism was not primarily designed for a foreign audience, but for Russians themselves, among whom leftist sentiments are increasingly prevailing.

The Russian State Duma elections in September revealed growing support for the communists (even with significant state-organized fraud, the old ruling party came second with 19% of the vote.) This outcome, ironically, can be partly traced back to the authorities’ own propaganda campaigns: unable to offer an attractive image of a desired future, the state instead harked back to an idealized past intended to justify the aggressive policies of modern Russia. In this interpretation, the need to restore the USSR was no longer presented as a tribute to nostalgia, but as the only way to survive and preserve Russia, which was defending itself against “hostile encirclement.”

It is not surprising then that voters rallied to the offer of “true socialism” with guaranteed employment, low crime, and free education and health care, which Putin’s authorities have been unable to provide.

This is a more widespread issue. The same tendency can be seen in the constant growth in the popularity of the Soviet dictator Joseph Stalin. According to polls conducted by the Levada-Center in 2019, 51% of Russians admired, respected, or sympathized with Stalin. This year, this record was again exceeded. As of the summer of 2021, 60% of Russians view Stalin positively and only 11% perceive him negatively. A rise in the popularity of the dictator could be seen even among young people. According to the survey, the number of those who would rather the USSR still existed was 66%.

It is important to say that the Russian people are not nostalgic for Stalin the butcher, responsible for the deaths of millions of innocent people, rather for qualities and action that they would hope for from the current authorities. In a poll conducted in August, respondents cited Stalin’s virtues as “restoring order, lifting the country from its knees,” and “winning the war,” which exposes the current demand for justice, sovereignty, a strong leader, and military power.

Tellingly, this indicates that for most Russians, Vladimir Putin is no longer satisfying these expectations. This makes some sense: as the creator and head of a system based on corruption and lawlessness, he can hardly be seen as a symbol of social justice. As concerns national defense and military power, despite the constant exploitation of the “external threat” in propaganda, an ever-increasing number of Russians think that over the years the Kremlin has proven incapable either of protecting the country from numerous “enemies” or restoring normal relations even with neighboring states.

The Kremlin understood this and permitted the Communist Party of Russia (KPRF) to include quite radical oppositionists on its party lists, something obviously intended to “channel” protest sentiment into the mainstream of the Communist Party and bring them under control. This includes the “Left Front” and “For a New Socialism” movements, whose leaders, Sergey Udaltsov and Nikolay Platoshkin, support the Kremlin’s aggressive anti-Western approach to foreign policy, but sharply criticize the Russian leadership on domestic political issues.

Some prominent KPRF functionaries, such as First Secretary of the Moscow City Committee, State Duma Deputy Valery Rashkin, also have acted quite “unsystemically,” supporting the jailed leader of the liberal opposition, Aleksey Navalny, and playing on the anti-vaccine sentiments popular in Russia. But they will pay a price for such independent-minded behavior. Shortly after the elections, the Investigative Committee opened a criminal case against Rashkin who was accused of drink driving while in possession of an illegally slain elk stowed in his trunk. (It is of course possible that the deputy would have faced charges if he was a Putin loyalist, but it would be hard to find a Russian who believed that.)

This is the logical course of events in Putin’s Russia. Rashkin, having fulfilled his task as an electoral protest magnet, is no longer is needed by the Kremlin and might even pose a threat. Meanwhile, the speech at Valdai showed that Putin himself is stepping forward in the hope of riding popular leftist sentiment.

As for the proclamation of the values of “healthy conservatism,” it was more likely directed at an external audience and is a repetition of familiar clichés. In February the Russian theater director Konstantin Bogomolov published a Manifesto in which he imagined Russia in the role of a “new old Europe” – an alternative to the existing Europe. “The modern West is . . . a criminal who has undergone chemical castration and lobotomy. Hence this fake smile of benevolence . . .  frozen on the face of Western man,” he wrote.

Putin repeated a shortened version of the Manifesto’s main idea, that Russia should position itself in the international arena as a center of gravity for “healthy conservative forces.” The idea is, of course, a fantasy; no mainstream European conservative could abandon the inviolability of individual freedom, human rights, and the rule of law, all of which are absent from Putin’s Russia (see elk, above.)

A Western conservative — in Russian usage, a right liberal — is a supporter of free markets, minimal state interference in peoples’ lives, and the priority of the individual’s right to decide and to resist social pressure. A Russian conservative is, most often, an imperialist who puts the state above the individual, approves of repression in the name of patriotism, and is hostile to modernity as epitomized by the Western world.

Unlike Russia, the Western world has a rich tradition of moderate and free conservatism. It is true this conservatism is today in crisis, and that more radical and populist movements have become more significant. And yet the long-established post-World War II conservatism is still very much alive — in Russia, it never emerged.

Unfortunately, there are few in the West who understand this difference. As an example, several years ago the Alabama-based far right-wing organization League of the South published an appeal entitled To Our Russian Friends, calling them “natural allies in blood, culture, and religion.” Such ideas may find a home far from Russia’s borders, but Russians themselves are unlikely to be swayed; they well understand that behind the words about “new ideologies,” the government’s true agenda is a combination of neo-Stalinism and repressive fundamentalism.

In 2019, before the coronavirus pandemic, Russia registered the greatest number of male suicides in the world. Psychiatrists said this reflected a widespread collapse of social, economic, and individual prospects. As noted by doctor of psychology Aleksanr Asmolov: “Russia today is the global champion of the absence of prospects,” in which “personality is devalued to the limit, and its value increasingly reduced to zero”.

For as long as this is the case — and there is no sign of change at the moment — Russia has no hope of becoming a model or “center of gravity” for other countries.