The naval conflict has been less visible during Russia’s assault on Ukraine, but the outcome of the war at sea is absolutely critical. 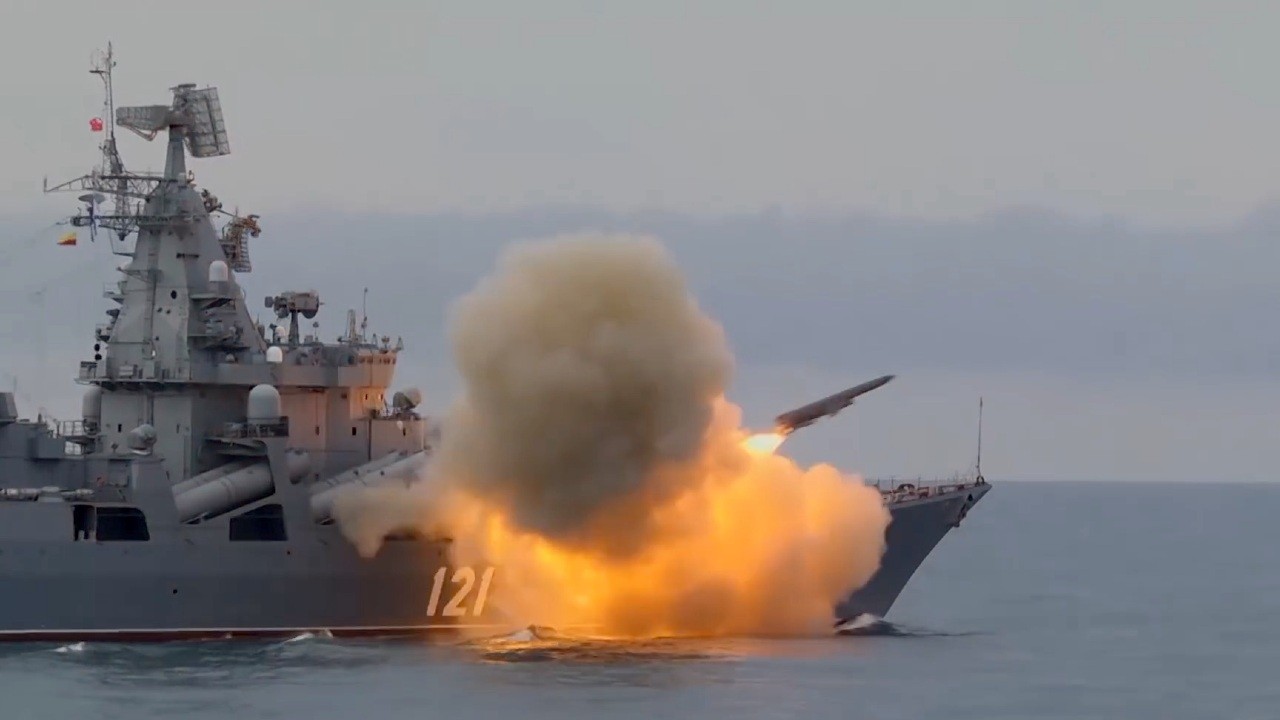 Photo: File image of Russia Black Sea flagship Moskva (Moscow). Moskva, the flagship of Russia's Black Sea Fleet, was being towed to port when "stormy seas" caused it to sink, according to a Russian Ministry of Defense statement on Friday April 15, 2022. However, Ukraine claims that the warship was hit by two anti-air Neptune surface-to-sea missiles (range 300 km), about 25 nautical miles from Snake Island. The 510-crew missile cruiser was a symbol of Russia's military power, leading its naval assault on Ukraine. The 12,490-tonne vessel is the biggest Russian warship to be sunk in action since World War Two. Ukrainian military officials said they struck the Moskva with Ukrainian-made Neptune missiles - a weapon designed after Russia's annexation of Crimea in 2014, and the naval threat to Ukraine in the Black Sea grew. The ship's sinking was described by the US as a big blow, but American officials were unable to confirm whether Ukrainian Neptune missiles were responsible. Credit: Russia MOD/EYEPRESS.

As Russian ground forces massed along the Ukrainian border in late 2021 and early 2022, so too was the Kremlin laying the groundwork to cut the country from the sea and to bolster its own Black Sea naval forces with elements from the Baltic and Pacific Fleets.

Having secured both sides of the Kerch Strait and Crimea years in advance (see Part I), Russia was well-placed to close the Sea of Azov and areas around the Crimean Peninsula to foreign ships for much of 2021, in direct violation of the 2003 Russo-Ukrainian treaty and the United Nations Convention on the Law of the Sea.

Immediately prior to the invasion on February 24, Russia again issued warnings that it would be conducting live-fire exercises from February 13-19, blocking access to the Sea of Azov and areas around the Crimean Peninsula. While Moscow reversed its decision for the Sea of Azov, the Black Sea zones around Crimea remained closed. At the same time, it was reported that six amphibious landing ships entered the Black Sea. Now reinforced, the Black Sea Fleet conducted an exercise involving some 30 warships which ended just five days before the invasion. Once Russian ground forces commenced their assault on Ukraine, Russia had virtually achieved command of the sea by default.

Naval engagements over the past two months have been fewer and less intensive than the land operations that have attracted most coverage of the conflict. But the maritime aspects of the war are extremely significant, particularly for their post-war implications.

Thus far, Russian fleet assets have bombarded major cities, including Mariupol, and landed several thousand naval infantry to the south of the city in late February. Fearing that it would fall into Russian hands, Ukraine scuttled its flagship, the frigate Hetman Sahaidachny, in the harbor to avoid capture. Russian and Ukrainian ships have exchanged fire, resulting in the sinking of several Ukrainian and Russian patrol vessels. The threat of an amphibious operation against Odesa has also loomed, but is likely too risky a move without dedicated ground support.

Most importantly, however, while a formal blockade of Ukraine has not been declared, a de facto blockade is certainly in place. Beginning on the day of the invasion, Russia suspended the right of commercial traffic to enter (but not leave) the Sea of Azov. Russian fleet assets have likewise positioned themselves to cut off Ukraine’s remaining Black Sea access.

Already, several neutral commercial ships have been hit by Russian naval fire, disrupting the flow of shipping for a country whose exports account for roughly 41% of its economy, and halting most grain and other agricultural shipments that help to feed the world. Many neutral commercial ships are now trapped in Ukrainian ports. Sea mines have been spotted drifting into neutral waters as far as Romania and Turkey, even being reported to hit commercial traffic in the Danube River, further heightening the risk for all commercial vessels throughout the Black Sea. For its part, Ukraine voluntarily closed its ports to commercial traffic in late February. The blockade has also precluded military supplies via the sea, thereby limiting the speed of delivery and volume of military aid to reach the front lines.

The most notable naval encounter to date came on April 13, when Ukrainian forces said two of their anti-ship missiles had struck the Moskva, flagship of the Black Sea Fleet. The cruiser’s sinking was a reminder that, despite being well-armed with anti-air capabilities, modern ships are still vulnerable, and the human factor remains integral to combat performance. Nonetheless, the loss of the Moskva itself may not be as significant as some observers suggest. Indeed, it is unlikely that the Ukrainian navy can meaningfully capitalize on the event to break the blockade. Similarly, without a significant and sustained influx of anti-ship weapons from foreign powers (the UK has sent some small anti-ship missiles and the US is currently assessing a Ukrainian request for more powerful Harpoon guided munitions), it is questionable whether Ukraine will be able to execute a strategy of sea denial.

Russian territorial gains are certainly substantially less than what the Kremlin had hoped, but the areas which they now largely control hold great significance for the future of Ukraine’s sea access and Russian naval power in the Black Sea. As of mid-April, Russia had captured Berdyansk and declared victory at Mariupol, despite Ukrainian forces holding out in some parts of the city. In doing so, Ukraine has effectively been severed from the Sea of Azov, decisively transforming it into a Russian lake.

The major port city of Kherson has also fallen into Russian hands, continuing to extend Moscow’s control along Ukraine’s Black Sea coastline. Mykolaiv, a major port city with three significant Soviet-era shipyards, held out against Russian attacks throughout March but remains close to the frontlines. Should fighting for the city be renewed in the next phase of the conflict, the Kremlin might be able to acquire the domestic large-scale shipbuilding capacity it has lacked since the collapse of the Soviet Union. Russia’s aging, lone aircraft carrier, the Admiral Kuznetsov, and its three Slava-class cruisers, were constructed at Mykolaiv’s shipyards during the 1970s and 1980s. Their capture would virtually nullify the long-term ramifications caused by the loss of the Moskva.

Meanwhile, the blockade continues to throttle Ukraine. But there is an alternative — if Ukraine can maintain a strategy of sea denial, it may impose enough attrition on Russian fleet assets that the blockade becomes unsustainable. This is an alluring prospect, given that Turkey has closed access to the Black Sea via the Dardanelles to warships for the duration of the conflict under the provisions of the Montreux Convention, meaning Russia cannot bolster its naval forces with elements from the Baltic or Pacific Fleets.

On the ground, Ukrainians have and continue to valiantly resist the Russian invasion. Nonetheless, despite the frequent proclamations on how and when the war will end by journalists and analysts, it remains to be seen whether Ukraine is indeed capable of continuing to resist and if Russia itself is able to sustain the war. In the last week, Russia has initiated a new phase of the conflict, reallocating forces to the pre-war separatist Donbas region. This newly focused offensive, beginning on April 18, has sparked intensive fighting but has not yet resulted in major Russian advances.

If, as some Western analysts argue, the war is likely to end in some form of armistice where Russia retains control of its territorial gains, Vladimir Putin will still have achieved some notable triumphs, albeit at a greater cost than he hoped. Russia has largely obtained its desired land corridor to Crimea and secured the Sea of Azov. If the Kremlin can hold onto these gains, it will have solidified Russia as the dominant force in the northern half of the Black Sea, if not the whole region, allowing it to project power more effectively in the Black Sea and the Mediterranean. Ukraine will have lost the vast majority of its coastline, major ports, and (possibly) its domestic shipbuilding industry, jeopardizing the country’s long-term economic vitality and security.

But this is by no means pre-ordained. Military aid continues to flow into Ukraine, providing the resistance with new capabilities and vigor. Its forces appear to be successfully pushing back on several fronts, creating much-needed optimism. While the outcome of the war thus remains elusive, what is certain is that the naval warfare operations and maritime implications of the conflict will help determine the course of the war and greatly impact the post-conflict Black Sea status quo.

Retired Navy Admiral James G. Foggo III is a distinguished fellow at the Center for European Policy Analysis and former commander of U.S. Naval Forces Europe and Africa, and Allied Joint Force Command, Naples. He commanded BALTOPS in 2015 and 2016 and Exercise Trident Juncture in 2018.

Benjamin Mainardi is an analyst at the Center for Maritime Strategy.