Russia has not been successful in the war against Ukraine so far, because Ukrainians are tenaciously defending their homeland. We must offer immediate aid. 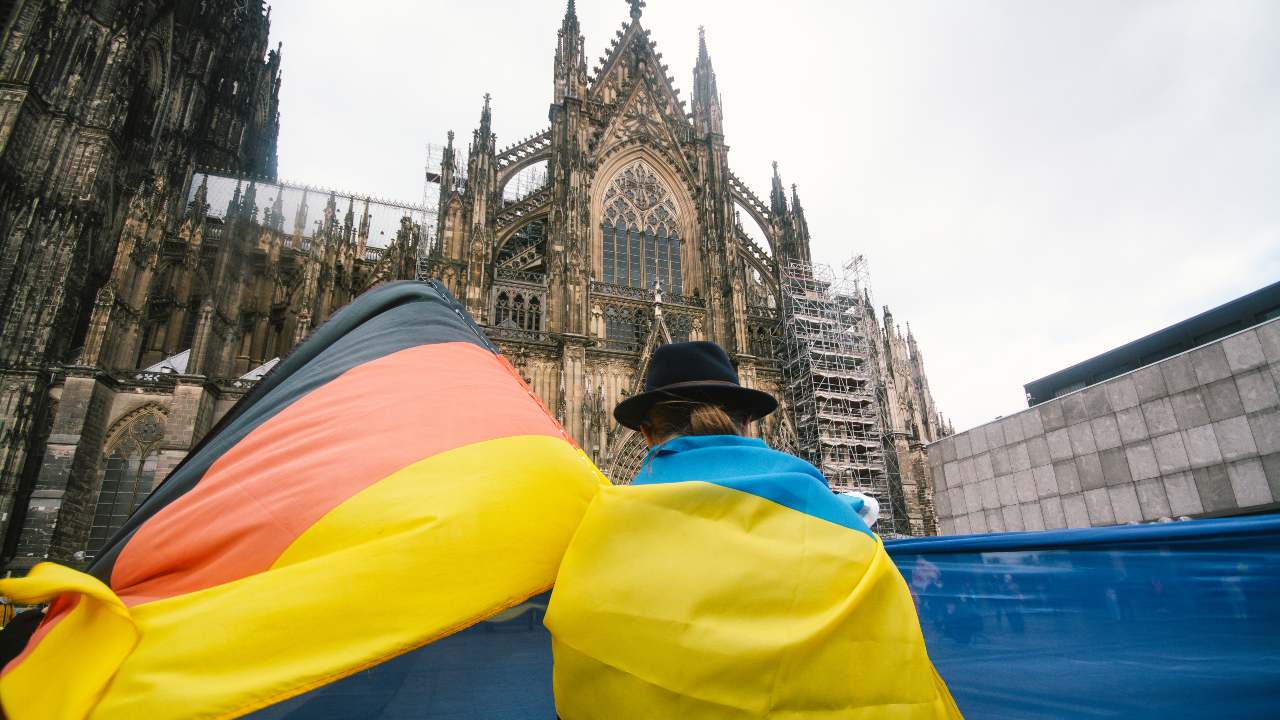 Photo: A woman with a Ukraine flag and German flag during a protest in Cologne, Germany, on January 30, 2022. - Demonstrators criticised Putin's massing of troops near the Ukrainian border and called on Germany to play a more active role in defending Ukraine's interests. Credit: Ying Tang/NurPhoto

Russia has not been successful in the war against Ukraine so far, because Ukrainians are tenaciously defending their homeland. We must offer immediate aid.

Don’t always wait until Putin acts or Russia creates new facts in the war against Ukraine, but act yourself. Take the initiative, catch Putin on the wrong foot, surprise him and force him to react. There are plenty of options: the Arctic, space, Africa, Syria, Libya, the Western Balkans, the Far East, oppressed ethnic groups and minorities in Russia, political repression — Putin has many points of weakness.

Only Ukrainians can decide if and what concessions they want to make. As for “solutions”, or ideas about “splitting Ukraine,” or surrendering territory, Ukraine’s partners can make an excellent contribution by remaining silent.

It is solely the business of Ukrainians as to when and whether negotiations take place. Putin will try to secure conquered territory through supposed offers of negotiation or short-term unilateral ceasefires, or seek to buy time for resupply and reorganization. It is not for Ukraine’s friends to pressure Ukraine to negotiate. This is especially true now because Ukraine has been able to deliver military reinforcements to Kharkiv, Zaporozhye, and the Donbas. Now that Ukrainian military action to push back the Russians have succeeded, again and again, the political logic must (unusually) follow the military.

There are many exceptions to the SWIFT sanctions — including those which Germany has lobbied for. Russia uses exceptions as loopholes and Putin continues to finance the Russian war machine with energy deals. These exemptions should be abolished as quickly as possible and in a unified manner — including for energy suppliers. This will hinder and ultimately paralyze the Russian war machine.

The fact that sanctions imposed on Russia are unprecedented also means that we have no experience with their effects. Russia naturally tries to use loopholes, circumvent measures, and creatively game the system. The sanctions regime must therefore be constantly reviewed and adjusted to ensure its effectiveness in obstructing and paralyzing the Russian war machine.

Ukraine has been able to thwart Russian military plans so far — in part because a steady stream of arms and ammunition deliveries by partners is helping. In particular, NATO-standard 155mm-caliber artillery, which Western partners should supply with plenty of ammunition (most Ukrainian artillery pieces are 152mm), and armored vehicles are now critical. A start has been made with direct deliveries by many states and also ring exchange deliveries, whereby NATO partners shipping their own mostly Russian systems to Ukraine receive more modern replacements from large allies. Industry sales paid for by Germany or the EU are also a good way to go. A steady influx must be ensured for the coming period, which may also require forward-looking replenishment of ammunition and equipment. Germany can contribute much more, given what other allies have been willing to do. The government’s April 26 decision to send armored anti-aircraft vehicles is a good start.

Ukraine needs fuel, diesel, and gasoline constantly, and in large quantities, partly because Russia has shelled and destroyed many large fuel depots in Ukraine with missiles. To get the fuel to where it is needed, it needs containers, storage facilities, and transporters, both road, and rail. Germany is in a position to supply both on a continuous basis.

Ukraine has recaptured territories and its inhabitants want nothing more than to return home quickly. To do this, mines and other explosives littering these areas must be marked, and made safe, while war crimes must be properly documented. Germany has these capabilities and should provide them immediately. Electricity, sewage, and water, heating, mobile communications, Internet, roads, bridges, railways — everything needs to be repaired or rebuilt. This is where Germany and the EU have their considerable strengths. This can and should start immediately.

In Germany, leading politicians rightly emphasize the central importance of unity within NATO and the EU. And for that reason, Germany must now approach its partners of its own accord — especially in Central Eastern Europe — to listen to their concerns, and acknowledge that they were and are right about many things. There is lingering distrust at Germany’s decades of Russia-first policy, which has been lost to a loss of reputation. Our allies now view us in an extremely critical light. This poses an extremely high risk for the unity of NATO and the EU, but also for our export-oriented business model. It is up to Germany to rebuild trust with its partners.

Nico Lange was Chief of the Executive Staff of the Federal Ministry of Defense until January 2022. Prior to that, Lange served in Ukraine and Russia. post@nicolange.eu