Photo: A female soldier ahead of a visit of the Belgian King to the medical component of Belgian defence in Marche-en-Famenne, Tuesday 22 September 2020. Credit: BELGA PHOTO BRUNO FAHY.
September 23, 2021

The European Union’s defense and security review, the Strategic Compass, can open the way to a Europe-only use of military power. A transatlantic alliance in its eighth decade will be all the stronger as a result.

The illusory truth effect describes a tendency to believe certain information is factually correct simply because it is often repeated. Translated to European defense policy, this is summarized as the widespread belief that since the European Union (EU) has so far failed to create an ambitious defense policy, it will therefore fail forever. This thinking is rampant in the EU’s capital, Brussels.

There is another powerful instinct at work called the gap instinct, which refers to the inclination towards binary thinking: good versus bad for example, or hard power versus soft power. This seems to reign in the U.S. capital, Washington DC. In this version, a soft, civilian EU exists on the one hand and a hard defense NATO on the other, ignoring the generous space in between.

The shortcomings of the Afghanistan debacle have been well described: from the artificial consultation of allies on the (in reality, unconditional) withdrawal, to the lack of a common vision for the future of the region. The pullout exposed cracks in the transatlantic relationship and a European inability to provide alternatives for Afghan and regional security by themselves. Inside the EU bubble, this feels like a much louder alarm even than Donald Trump’s presidency. Not only because Europeans were on the ground themselves, but because Europe had little influence in shaping these events but will certainly bear the strategic consequences. Hearts and minds now appear focused on the rationale of a stronger European capacity to react to, and manage, crises detrimental to its interests. The questionable diplomacy behind the Australia-UK-US submarine affair (at the expense of France and of wider strategic European interests in the Indo-Pacific), has helped to focus them even more.

There won’t be a better time than now. The EU’s member states are already undergoing a strategic review under its Strategic Compass process, a first for the bloc. The Compass aims to provide guidelines for the direction (ends-ways-means) of EU security and defense policy, to identify political incentives that can deliver action, and to result in increased trust and shared strategic understanding among EU members. However, classic fatalism and a reluctance to dispute inflexible transatlantic divisions of labor threaten this process. A profound change in mindset is due if old cognitive biases are to be overcome.

For one, the U.S. habit of opposing European defense initiatives will significantly slow progress, thereby perpetuating Europe’s legendary inability to do defense. As President Biden is moving the country in what Ben Rhodes calls the “post-post-9/11 era” and to complete the pivot to Asia (consolidated further with the Aukus deal) which started under his vice-presidency, Europe needs more than a defense dialogue and worthy speeches. For example, I argued elsewhere that rethinking burden-sharing might allow NATO’s Europeans to become more involved and end the arbitrary, obsolete, and, arguably, US-centric way of doing the math on alliance defense spending. Conversely, Washington should take advantage of the political openness to new ideas provided by the Strategic Compass and by the NATO 2030 initiative to think more boldly about reshaping the pillars of the transatlantic relationship. It should replace the gap instinct with a farsighted (and self-interested) approach that sincerely encourages countries to invest in the pieces comprising the EU’s defense puzzle.

For its part, Europe should inject the urgency derived from its Afghanistan realization into the Strategic Compass. It should avoid distraction by fatalists describing it as “trapped in a state of Peter Pan–like infancy” and “stuck believing in a past that never was and a future it doesn’t have the will to bring about.” The EU should keep the illusory truth effect at bay through a cool-headed evaluation of the admirable number of defense policy taboos broken since 2016, not least as regards its relationship with NATO, and use the momentum to make them deliver. If even European-defense-skeptical The Economist argues that après Afghanistan “minds have moved” to favor the idea that Europe “will have to do more by itself,” then something's in the air. Notice to the calls for more European capacity coming from capitals other than Paris. Not only has the strongly Atlanticist German Defense Minister Annegret Kramp-Karrenbauer become more vocal about this, but so have her Slovenian and Italian counterparts.

The major proposal is for a 5,000-strong “initial entry force” to ensure a quicker and more flexible EU crisis response. While the U.S. has so far stayed (publicly) silent about it, NATO’s Secretary-General objected, arguing it will “weaken” the alliance and “divide” Europe.” I think this is unlikely. The EU has openly sought to expand its crisis management ability for years now, while NATO itself is on progressive tilt “away from out-of-area crisis management and toward collective defense.” Instead of outright opposition, the coincidentally simultaneous EU and NATO review forums could have jointly debated this proposal — a debate which could reveal the potential of such a force to generate a much-needed strategic and operational boost for both. Just as Europe is looking out-of-area, NATO is looking within its area, with a stronger focus on deterrence, resilience, and technology. It is not too late to reconsider.

Advancing European strategic autonomy (or whichever semantical version one adheres to) has the potential to make good on the rhetoric of a new chapter in the transatlantic relationship. Post-Afghanistan and post-Aukus, a reckoning for a more mature division of labor, fairer burden-sharing and increased international security could emerge if outdated ideological boxes were erased. The U.S. should make good on its olive branch of rethinking burden-sharing, and make it up to France by proactively supporting ideas meant to boost European defense. It should fight the reflex to quietly sabotage them for the traditional fear of detracting from NATO. Europeans will be too timid to jump on that boat by themselves, reluctant to upset their powerful ally. A European defense summit is in the works and so another chance arises.

This would score four wins in one hit: for European security, for NATO’s collective defense, for America’s Asian pivot, and for an alliance worthy of its eighth decade. The current strategic reviews are a chance to embrace the change instead of delaying it. The EU’s Strategic Compass process is not a silver bullet to all of Europe’s defense woes but it could be a silver lining.

Tania Latici is a Non-Resident Fellow in the Transatlantic Leadership Program. She works full-time as an EU civil servant focusing on European and transatlantic security and defense and is a NATO2030 Young Leader appointed by NATO Secretary-General Jens Stoltenberg.

She writes strictly in a personal and academic capacity and any views expressed here do not represent an official position of the European Parliament nor of the European External Action Service. 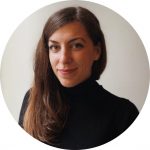