Slovakia has been on the margin of China’s foreign policy interest successive Slovak governments have not made a priority of cultivating ties with China. 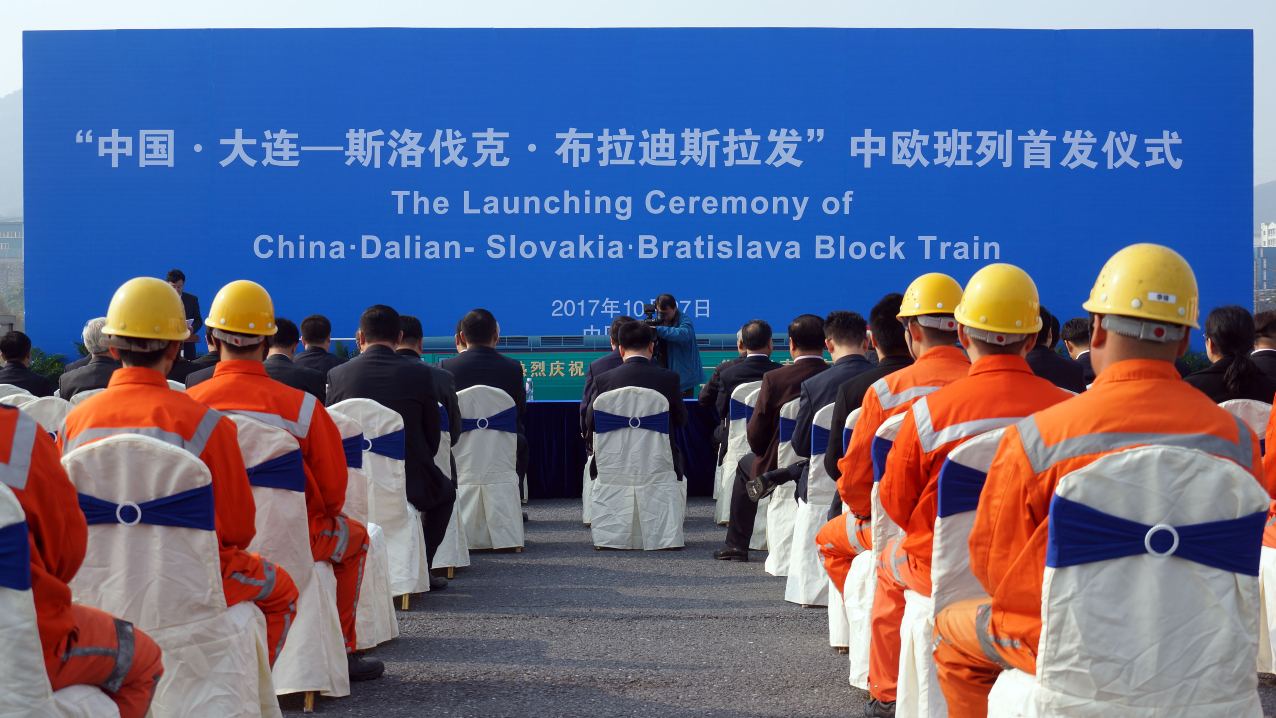 China has not had a particularly active presence in Slovakia, reflecting the two countries’ generally low-key relations. Overall, Slovakia has been on the margin of China’s foreign policy interest, just as successive Slovak governments have not made a priority of cultivating ties with China.

Since 2012, the relationship has been embedded within the 16/17+1 cooperation format, which has significantly increased contacts at various fora, but bilateral relations remain rather underdeveloped, and China has had a small footprint in Slovakia. It is a marginal investor in Slovakia, and many promised projects have not materialized, although that is set to change with the recently announced plans of the Chinese-owned Volvo to start making electric cars in eastern Slovakia. 1 In trade, Slovakia’s deficit with China is not as deep as some of its neighbors’ in Central and Eastern Europe, taking into account intermediary goods, such as car parts, that are first sent to other countries for further industrial processes and then ultimately to China. 2

For these reasons, Chinese policies toward Slovakia have not been particularly targeted and have mostly followed the general logic of Chinese foreign policy priorities, including protecting China’s core interests on issues such as Taiwan and Tibet; creating a positive image of China, Chinese foreign policy, and Sino-Slovak relations in the Slovak domestic discourse; and establishing links with local political and business leaders to induce China-friendly policies. 3 Overall, China has not been very aggressive in its attempts to influence Slovak leaders and the public, although it has become more visible since the outbreak of the pandemic.

China has long been a rather passive presence in Slovakia, not least due to an absence of Chinese state media in the Slovak language. But, as in many countries, it has recently become more active in Slovakia.

Chinese ambassadors have regularly published op-eds on Chinese foreign policy and relations with Slovakia. Notably, Chinese diplomats have published in outlets that can be termed fringe or alternative, such as Nové Slovo, Dimenzie, Slovenské národné noviny, or Hlavné Správy. 4 Most media that run content from the Chinese Embassy have limited reach, and publishing has been mostly performative, rather than aspiring to have an impact on the larger public debate. In keeping with that, the Chinese Embassy tends to post about its activities on its Chinese-language webpage, rather than publicizing them to the local audience.

But the embassy has placed pieces, including paid content, in mainstream outlets several times. For example, a leading business weekly newspaper, Trend, published an advertorial signed by the Chinese ambassador that repeated dubious claims that foreign actors had orchestrated Hong Kong protests against a bill allowing extradition to mainland China. 5 Later, the newspaper reportedly rejected another piece from the embassy that contained misleading and false claims. 6

The Chinese Embassy has become more willing to engage in the domestic discourse in recent years, although in a mostly reactive way. The embassy’s Facebook and Twitter accounts mostly repost content from Chinese state media and officials. Those posts have included conspiracy theories about the origin of COVID-19, linking it with the US. Among other activities, the embassy ran a series of “myth-busting” infographics on its social media designed to show that China reacted responsibly to the pandemic and to refute purported conspiracy theories about the virus’s origin. 7 Even this content, though, was not original but rather came from other embassies and Chinese state media.

Considering the limited reach of the embassy’s preferred channels, Beijing can hardly peddle its line to the larger Slovak audience. Instead, the most important conduit for the Chinese viewpoint has been several China-friendly Slovak politicians, especially Ľuboš Blaha, a member of parliament from the SMER-SD  (Direction-Social Democracy) party and a self-described Marxist. 8 Blaha is known for frequent, calculated, and virulent attacks on his political opponents and anti-Western, pro-Russia,  pro-China rhetoric. 9

Some political attack use relations with China as a weapon against rivals. For example, opposition politicians, including former prime minister and SMER-SD leader Robert Fico, blasted President Zuzana Čaputová for criticizing China’s human rights record and her predecessor, Andrej Kiska, for lunching with the Dalai Lama. Both drew China’s ire and, their opponents said, jeopardized a valuable relationship. 10 There are no reports that the Chinese Embassy made use of these pro-China statements by Slovak politicians in their own public outreach, perhaps because the embassy is wary of becoming entangled in domestic politics.

Slovakia was a target of China’s mask diplomacy in April 2020, when the prime minister and interior minister greeted a plane carrying personal protective equipment from China, an event widely promoted by Chinese media. 11

Apart from China’s low profile in the public debate, Beijing has several times tried to coerce the Slovak government or other institutions. For example, during a 2009 visit of the then-president of China, Hu Jintao, a welcome party of Chinese nationals scuffled with local activists protesting human rights abuses in China. The Slovak interior minister later said the welcome party had been organized by the Chinese Embassy, despite its denials. 12 Staff from the embassy and representatives of the local diaspora groups appear to have directly attacked the Slovak activists and journalists. 7

The Chinese government has also pressured Slovakia to abandon several policies it sees as counter to China‘s interests. In 2021, Slovakia faced Chinese criticism for welcoming a Taiwanese delegation and for a visit by Slovakia’s deputy economy minister to Taiwan. 13 Although Beijing vowed to retaliate for these actions, the countries’ economic relations appear intact. In February 2021, Slovak media reported that the Chinese government used the promise of allowing Slovak mutton exports to China to entice the Slovak prime minister to attend the 17+1 summit, where a lower-level official was originally scheduled to appear. 14 Moreover, a French journalist reported that China threatened to withhold Chinese COVID-19 vaccines to Slovakia unless Slovakia sent a top-level delegation, although this was not corroborated by other sources. 15

In general, China has had mixed success trying to foster a positive image in Slovakia. Studies from the MapInfluenCE project find that there is more negative coverage of China than positive in Slovak media, although neutral coverage prevails. 16 Public opinion can also provide insight on the perception of China, although it’s impossible to trace that directly to China’s propaganda and influence efforts.

In a survey conducted during the first wave of the pandemic in March 2020, China received high marks for its COVID diplomacy, possibly thanks to Beijing’s efforts to spotlight its aid. Sixty-seven percent of respondents said China had helped Slovakia a lot or somewhat during the crisis, compared with 22% for the EU. 17 Half a year later, another poll found that people credited China and the EU roughly equally for helping Slovakia throughout the pandemic. 18 In the second survey, however, 42% of respondents viewed China negatively and 28% positively, with the rest holding neutral views. A significant minority, 43%, said their view of China had changed in the past three years — 25% for the worse and 18% for the better, attesting to the fluidity of the public’s perception.

Given Chinese propaganda’s limited reach in Slovakia, opinions about China are more likely shaped by other forces, such as favorable comparisons with the West — especially as Slovaks are the least inclined among their neighbors to throw in their lot with the West. 19

Beijing has also made little apparent headway in fostering China-friendly elites. Few Slovak politicians explicitly support ties with China. Past governments under SMER-SD gave lip service to a closer relationship, but even they disengaged after becoming increasingly disillusioned with actual results. 20 The current government has been more vocal on topics that rankle China, including human rights, Taiwan, and the security implications of working with Huawei.

Rather than winning over the public, China’s influence efforts in CEE have generally focused on building ties with political and business elites, who in turn are the primary conduit for Chinese influence because China is not an established actor in the region. The Slovak Information Service, which assesses intelligence and security threats, noted in 2020 attempts by Chinese intelligence services to build ties across the Slovak government to benefit an unnamed Chinese information and communications technology company, most likely Huawei. The SIS also reported on efforts by unspecified Chinese actors to provide prostitutes to members of parliament to build relationships. 21

Political parties have not been a key conduit for China’s influence efforts, and Chinese Communist Party ties with local political parties in Slovakia are rather underdeveloped. Still, most of the key pro-China politicians have come from the SMER-SD party, which has dominated political life in Slovakia for most of the past two decades. There have been some contacts between SMER-SD and the International Liaison Department of the Communist Party.

In general, China maintains a limited presence in the Slovak public space and its activities remain low-profile. There have been no serious efforts by the Chinese side to significantly influence the Slovak domestic debate on China. Moreover, some politicians’ and institutions’ increased wariness of, or impatience with, China shows how unsuccessful China’s influence efforts have been. That could change, though, if the anti-establishment forces that promote anti-EU and anti-Western rhetoric get into power, as they might be more open to Chinese outreach as an alternative to the traditional orientation of Slovak foreign policy.