The Russian President’s menacing of a smaller neighbor derives from a skewed historical understanding that Ukraine is not a real country. 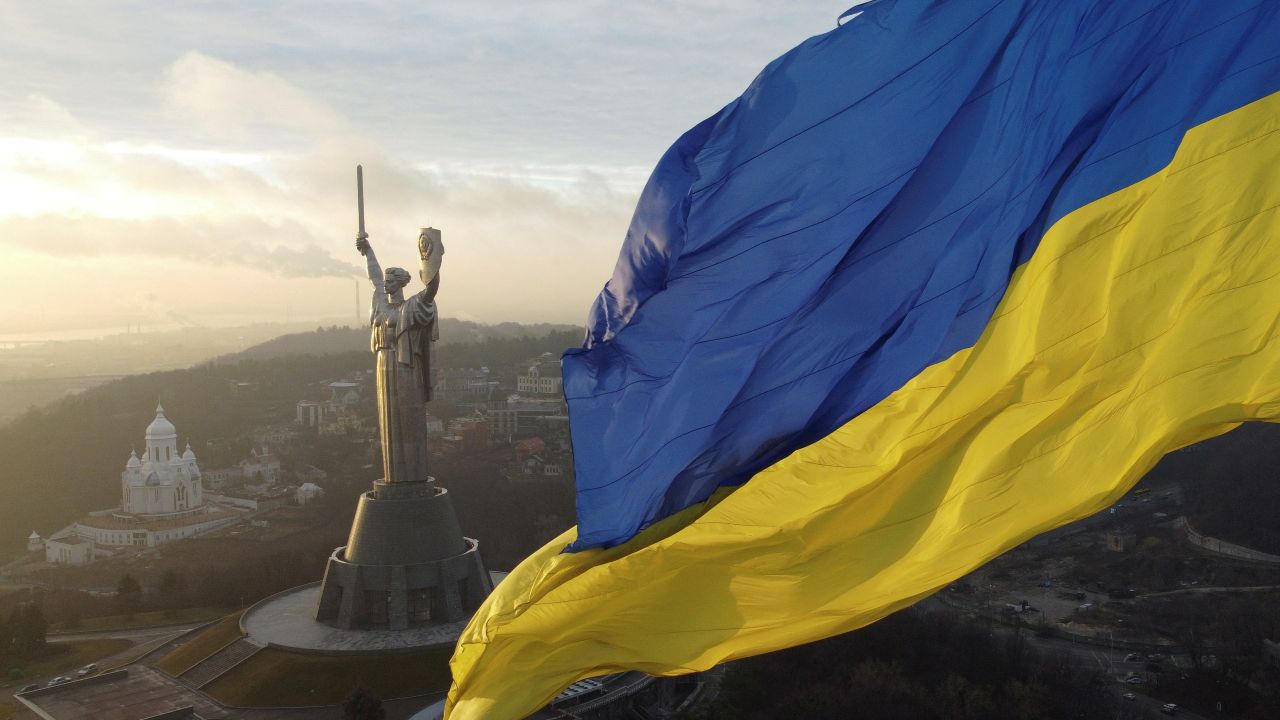 Photo: Ukraine's biggest national flag on the country's highest flagpole and the giant 'Motherland' monument are seen at a compound of the World War II museum in Kyiv, Ukraine, December 16, 2021. Credit: The picture was taken with a drone. REUTERS/Valentyn Ogirenko.

In the eyes of the amateur historian Vladimir Putin, Ukraine is not a fully sovereign and distinct national entity. This “fraudulent sovereignty” means that the country — Europe’s second-largest at more than 600,000 square kilometers — has no right to administer its internal affairs or to freely pursue foreign policy objectives.

How do we know? Putin spelled out his understanding of Eastern European history and his future ideas in his July article On the Historical Unity of Russian and Ukrainians. In it, Putin argued that the “true sovereignty of Ukraine is possible only in partnership with Russia” because of the ties formed during their shared history. They are, therefore, “one people.”

Like many before him, Putin believes in the shared origin of the Russian, Ukrainian, and Belorussian people.

Putin writes that “Russians, Ukrainians, and Belarusians are all descendants of Ancient Rus,” populated by Slavic and other tribes that “were bound together by one language (which we now refer to as Old Russian), economic ties, the rule of the princes of the Rurik dynasty, and – after the baptism of Rus – the Orthodox faith.” He believes that: “Both the nobility and the common people perceived Rus as a common territory, as their homeland.”

Ukrainian historians argue that while the parts of modern Ukraine and modern Russia shared dynastic ties in the early Middle Ages, it might not be enough to talk about the ethnic, cultural, and linguistic unity of the people populating them.

Kyivan, or simply Rus`, originated from a Viking settlement in the forested lands in and around Kyiv in the eighth century. One of the Viking clans, the Ruriks, conquered their competitors, established control over the river trading routes, and established political unity.

“Most scholars believe that the word ‘Rus’ has a Scandinavian origin. It probably derives from the Finnish term Ruotis’ to denote Swedes – in Swedish, it means ‘the men who row,’ says Harvard University historian Serhii Plokhy.

From Kyiv, which in the 11th century was one of the largest cities in Europe, the Rurik dynasty expanded to the west and east, reaching modern Belarussian and Russian territories. Not satisfied with the prospects at home, its princes established control over new territories, and in this fashion, Moscow was founded in the early 12th century.

Ukrainian historians believe this expanded principality did not share a common language. Rus` imported religious texts from Bulgaria, translated from Greek into Slavic Bulgarian, later dubbed “Church Slavonic.” But this language was not spoken by the Rus population and was only used in “Church dealings, state, court proceedings, keeping historical records,” says Ivan Patrylyak, Dean of the History Department of the National Taras Shevchenko University in Kyiv.

Nor was there a sense of unity among the varied peoples of Rus`. Plokhy says that the dissemination of Slavic identity was closely associated with the acceptance of Christianity from Byzantium. “The more Rus’ became Christian, the more it became Slavic, viewed in the context of the Balkan Slavs, the broader history of Byzantium and the world of Christendom,” he says. About one-third of the tribes were not Slavs and as Rus` land began to fragment, political loyalties shifted to the local principalities, the historian said.

The dynastic connection holds little significance —the ruling dynasty was Norse and related to most of Europe. One of its princes, Yaroslav the Wise, married a daughter of a king of Sweden. He also married his children to close relatives or rulers of the Byzantium empire, Norway, Poland, Hungary, and France.

Incredibly, we know the exact day of the demise of Kyivan Rus` — December 7, 1240, when Mongol invaders from the Eurasian steppes conquered Kyiv. They split the lands ruled by the Rurik dynasty into two parts — one was the core of future Russia, and another that eventually became Ukraine.

The experience of Mongol rule was very different, says Plokhy. “In its eastern part, the Mongol presence lasted until the end of the 15th century and was much stricter, partially because it was closer to their political center. In Ukraine, the Mongols were less intrusive and oppressive; their rule was effectively over by the mid-14th century.”

Over time, the western part was incorporated into the Kingdom of Poland, the Grand Duchy of Lithuania, and eventually into the Polish-Lithuanian Commonwealth, with differing degrees of autonomy.

In the 15th century, on the steppes south of Kyiv, a new force emerged called the Cossacks. Those lands loosely governed by semi-autonomous rulers, were booming with settlers. Many came to escape serfdom, taxes, or debts. Local rulers encouraged the settlements to provide a buffer from the Crimean Khanate, a vassal state of the Ottoman empire, that engaged both in trade and in slave raids. Beginning as small bands, Cossacks became renowned as the liberators of slaves, as warriors, and eventually, as a political and military force engaged in prolonged conflict with Polish rulers.

On January 8, 1654, in the town of Pereiaslav, the Cossack leader Bohdan Khmelnitsky gathered a group of his officers to swear allegiance to Czar Aleksei Romanov of Moscovy.

Much like Soviet historians, Putin refers to this treaty and subsequent events culminating in the Truce of Andrusovo in 1667 and the Treaty of Perpetual Peace in 1686, as the reunification of the divided people. “Their inhabitants were reunited with the main part of the Russian Orthodox people. These territories were referred to as ‘Malorossia’ (Little Russia).”

This is not accepted by most Ukrainian historians. “What happened in Pereiaslav in 1654, Plokhy says, “was neither the reunification of Ukraine with Moscovy [the official name at the time] nor the reunion of two fraternal people. No one was thinking in ethnic terms back then. Khmelnytskyi’s speech, recorded in the materials of the Muscovite embassy, explains his thinking. He outlined four choices for the sovereign of the Cossack Hetmanate: Turkish sultan, the Crimean khan, the Polish king, and the Tsar.”

Patrylyak notes that: “Bohdan Khmelnytsky looked for military support and dynastic legitimacy. It seemed to him that the conditions offered by the czar and his ambassadors were the most favorable.”

Yekelchyk, a history professor at the University of Victoria, Canada, says the notion of the Rus′ people reuniting under the scepter of czars descending from the ancient Rus′ rulers was a later invention. “It was first developed by Kyivan clerics trying to secure their role under the tsars and later enshrined in Russian and Soviet imperial ideology.”

The two sides needed interpreters to understand each other, says Plokhy, and viewed the agreement differently. While the Cossacks saw it as “a contract with binding obligations for both sides, the Czar perceived the Cossacks as his new subjects and their lands as his new realm.”

It didn’t take long for the Cossacks to realize the difference. The following period is known to Ukrainian historians as “the Ruin,” and saw multiple alliances struck or negotiated by Ukrainian military commanders — with Poland, the Ottomans, and the Swedes. Despite their efforts, the Truce of Andrusovo (1667) divided Cossack Ukraine along the River Dnipro, between Moscovy and Poland. This dividing line remained for centuries.

One of the most striking passages in Putin’s treatise indicates that he sees Ukrainian nationhood as a creation of the late 19th century and critically as a result of foreign influence.

“At the same time, the idea of Ukrainian people as a nation separate from the Russians started to form and gain ground among the Polish elite and a part of the Malorussian intelligentsia,” he said. “There was no historical basis [for this idea].”

Putin then turns his ire on the Bolsheviks for their 1922 decision to establish the Ukrainian Soviet Socialist Republic, which had at least the nominal right to secede, which Russia’s President describes as planting “the most dangerous time bomb.”

“This Soviet national policy secured at the state level the provision on three separate Slavic peoples: Russian, Ukrainian, and Belorussian, instead of the large Russian nation, a triune people comprising Velikorussians, Malorussians and Belorussians,” he writes.

Patrylyak contradicts this, explaining that that “the idea of creating an independent Ukraine in the modern sense of the word was seen in Shevchenko’s poetry in the mid-19th century, expressed in the works of Ukrainian intellectuals in the second part of the 19th and clearly defined at the turn of the century.” This was not purely an idea limited to an ethereal intellectual class. The Ukrainian struggle for independence against the Bolsheviks and the White Army cost the country an estimated 100,000 dead, Patrylyak says.

“Lenin’s writings clearly show that he acknowledged the strength of the Ukrainian idea and instructed the Bolsheviks in Ukraine to accept the notion of presenting their state structures as ‘Ukrainian’ and using the Ukrainian language, which many of them considered ‘counter-revolutionary,’” says Yekelchyk.

Similarly, he notes decades of Ukrainian patriotic activism in Western Ukraine (in those lands seized by the Habsburg Empire after the partition of Poland in 1772), which provided the roots for the formation of the Western Ukrainian Republic in 1919.

In other words, there is a strong case for the modern Ukrainian state derived from at least three centuries of modern history, that period during which the national idea came to fruition. But there is also a much clearer and newer case for the independence of the Ukrainian state. That came on December 1, 1991, when 90.32% of the referendum participants voted that their post-Soviet future should be to live in an independent Ukraine.

Tatiana Vorozhko is an analyst at Voice of America. Previously, she was a media adviser to the OSCE Project Co-ordinator in Ukraine. She has an MS degree from the E.W. Scripps Schools of Journalism, Ohio University, and a Master’s degree in History from the T. Shevchenko Kyiv National University.

Views expressed in this article are the author’s only and are not endorsed by Voice of America.