The sudden eruption of protest and violence in Kazakhstan has been quelled by gunfire and hundreds of Russian troops. But profound underlying problems remain 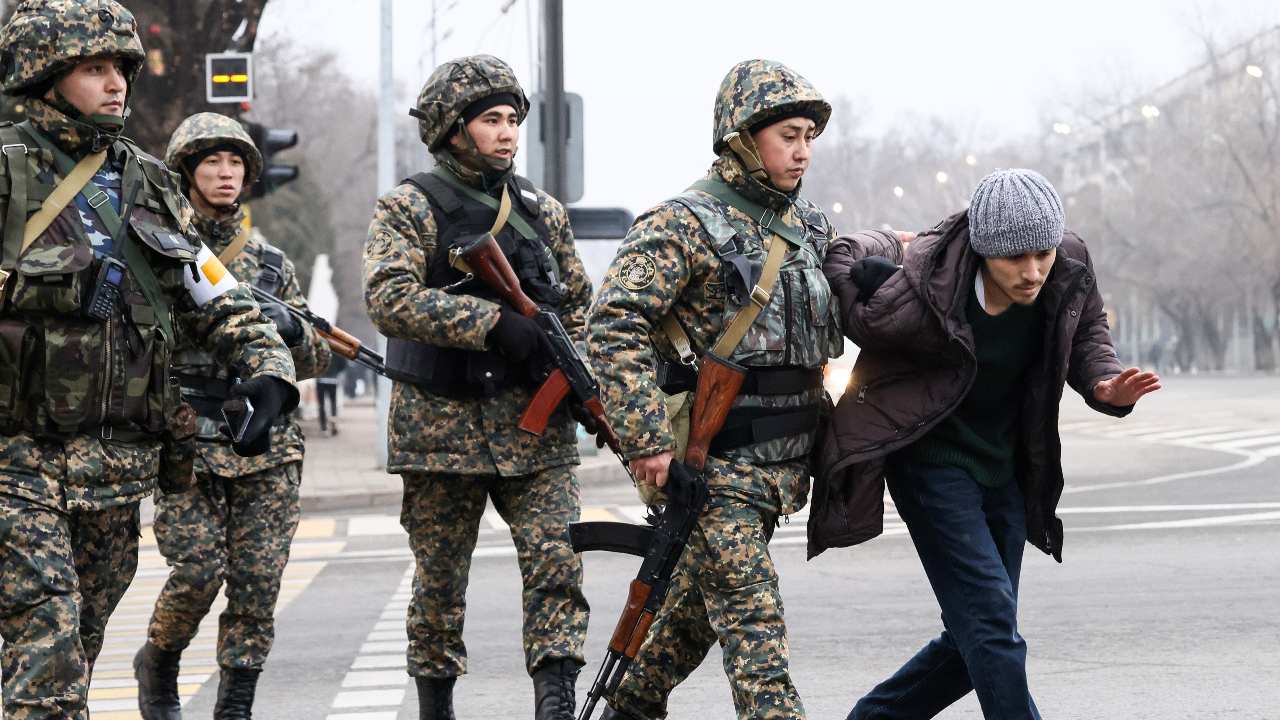 Photo: ALMATY, KAZAKHSTAN – JANUARY 10, 2022: A military patrol detains a man on Nazarbayev Street. A rise in fuel prices sparked protests in the towns of Zhanaozen and Aktau in western Kazakhstan on January 2 and spread rapidly across the country. On January 5, President Tokayev dismissed the cabinet and declared a two-week state of emergency in the Mangistau and Almaty regions as well as in the cities of Almaty and Nur-Sultan. On January 6, a counterterrorism operation to stop mass unrest began. Credit: Valery Sharifulin/TASS.

Since its independence, Kazakhstan has appeared the most stable and predictable of the five Central Asian nations. It has maintained good relations with key foreign interlocutors, internal political stability, and moderate economic growth, albeit all at the cost of restricted freedoms and extensive corruption.

In 2019, it began an unprecedented transition of power, with First President Nursultan Nazarbayev stepping aside for a handpicked successor, Kassym-Jomart Tokayev. On the surface, all appeared to be well. As president, Tokayev remained deferential to his predecessor while pursuing a limited program of economic and political reforms designed to garner the support of the population. Last week, however, the façade collapsed as Kazakhstan descended into chaos.

While difficult to unpick, Kazakhstan is essentially experiencing two simultaneous crises. Last week, a localized protest over fuel prices triggered nationwide demonstrations calling for improved socio-economic conditions and a more inclusive political system. Concurrently – and very possibly as a result of the protests – Kazakhstan’s ruling clique spectacularly ruptured. While it is not known for certain how the conflict began, we do know that President Tokayev wrested control of Kazakhstan’s state apparatus from Nazarbayev’s family. This conflict is not only taking place in the corridors of power, however. it has spiraled into an armed insurrection on the streets of Almaty, the biggest city, and other towns.

The first sign of a split in the elite came on January 5 when Tokayev issued a terse statement announcing that he had assumed chairmanship of the Security Council, the coordinating body for Kazakhstan’s security apparatus and armed forces. In doing so, he likely violated Kazakhstan’s constitution, which states that Nazarbayev occupies the role of chairman for life. Later, he dismissed Karim Massimov, the chairman of the National Security Committee, the main intelligence agency, and a key Nazarbayev ally, before announcing Massimov’s detention on charges of treason.

As the split occurred, armed groups descended on Almaty and, nearly a week later, continue to contest areas of the city in pitched battles with government forces. Sensing the insurrection was directed at his presidency, Tokayev took the extraordinary step of calling in foreign support via the Collective Security Treaty Organization (CSTO), the Russia-led security bloc. The decision appears to have been designed to secure the loyalty of both Kazakhstan’s security services and its political elite. CSTO support — which in essence means Russian support — is a clear signal to both groups as to who the Kremlin backs.

The largest unanswered question is the position of Nazarbayev. Until last week, it appeared that the ruling tandem was operating smoothly. Last year, Nazarbayev passed to Tokayev chairmanship of two institutions that had remained until his control after stepping down from power: the Assembly of the Peoples of Kazakhstan and the Nur Otan political party. Nazarbayev’s whereabouts remain a mystery. While his press secretary has stated that Nazarbayev remains in Nur-Sultan, no conclusive proof has been forthcoming.

For now, President Tokayev appears to be gaining the upper hand. The violence in Almaty is subsiding, in part because Russian units are stiffening the resolve of the Kazakh security services. Tokayev is also due to present a new government and announce reforms on January 11, suggesting he has sufficient political support to build a governing coalition. Nevertheless, a protracted period of renegotiation with the elite is set to unfold in the coming months as Tokayev seeks to consolidate his position.

And questions remain. Even if Tokayev is able to gain control of the governing apparatus and elite, it is far from certain that he can satisfy the demands of the population. Some of the protestors have called for constitutional change, such as the establishment of a parliamentary republic. Others simply want to see improvements to living standards at a time when inflation is heavily degrading purchasing power. Another complication is that Tokayev’s handling of the crisis has been hugely divisive. His decisions to open fire without warning and invite CSTO troops into Kazakhstan will delegitimize him in many people’s minds – even if foreign troops leave the country, as President Putin suggested (and US Secretary of State Antony Blinken questioned.)

While last week’s violence might end in the coming days, Kazakhstan’s dual political crisis has only just begun.