War Update — and What Else Ukraine Needs

The war is now focused on three fronts where peril and opportunity lurk for Ukraine. Military progress relies on Western help. 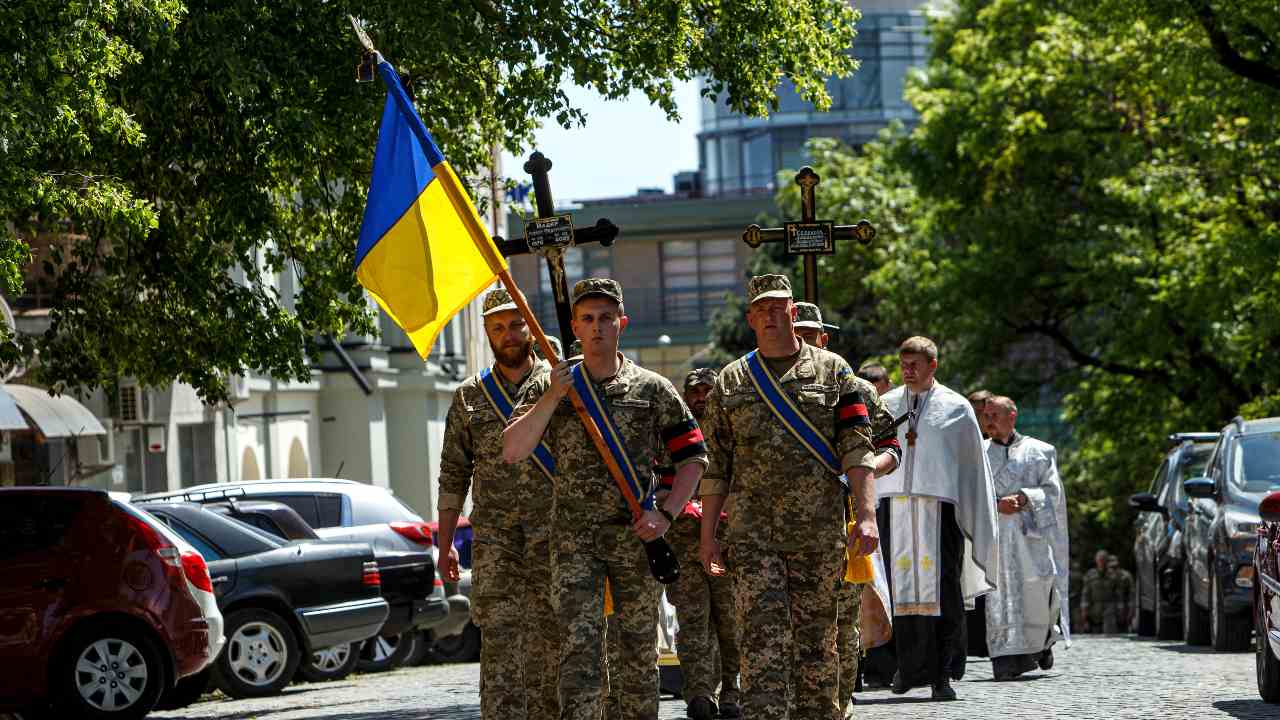 Photo: UZHHOROD, UKRAINE - MAY 16, 2022 - Servicemen carry the national flag during the farewell ceremony for Ukrainian defenders Oleksandr Serousov and Robert Madyar who died in combat with Russian occupiers, Uzhhorod, western Ukraine. This photo cannot be distributed in the Russian federation., on May 16, 2022 Credit: Photo by Serhii Hudak/Ukrinform/NurPhoto.

After the temporary failure of the attacks on Kiev, Chernihiv, and Sumy and the fall of Mariupol, Russia shifted the center of gravity of the war to the Donbas (1). Fighting continues on the southwestern bank of the Dnipro River (2) and north of Kharkiv (3).

In the Donbass, Russia is concentrating attacks on the narrows of Severodonetsk and Lysychansk, the thrust from Lyman toward Slowyansk, and a wedge from Popasna toward Bachmut.

With a “firestorm” of almost incessant airstrikes, artillery, and rocket artillery fire, Russian troops are advancing slowly and systematically, devastating the civilian infrastructure.

Ukraine can hardly play to its strengths of mobile defense in these confines, and must operate with the constant threat of air strikes, artillery, and rocket fire from three sides.

The Ukrainian armed forces currently lack the necessary weapons to effectively counter Russia’s massive aerial and artillery superiority (a leaked intelligence report suggests the disparity is 20:1). It is therefore trying to inflict massive losses on the Russians, especially by drawing them into urban areas.

Ukraine’s current approach is (wisely) driven by goals rather than territory; so it seems that Ukrainian commanders view the defense of Severodonetsk (and probably Lysychansk) as an opportunity to inflict as many losses as possible in a built-up environment, rather than hold onto them at all costs.

Nonetheless, it lacks the necessary weapon systems to decisively hit command and control, communications, or logistics facilities behind the side of the Russian lines in Donbas.

The current price paid for slowing the Russian advance is very high; casualties are 60-100 killed daily. Many of the best and most experienced Ukrainian soldiers have fallen. Civilian infrastructure is almost completely destroyed.

It is now likely that Ukraine will have to retreat to the western side of the Siversky Donets River and the hills of Lysychansk, using the river and the high ground above as new defensive positions.

In particular, a contested crossing over the Siversky Donets will very likely be associated with further heavy losses for the Russian side, even more given the high ground on the opposite side. Russia has reason to fear river crossings given recent experience attempting to cross the same river further north in May. At least 400 Russian troops died and scores of armored vehicles were destroyed.

Nevertheless, because of the superiority in artillery, a slow advance of the Russian “fire roller” in the directions of Lysychansk, Bachmut, Slowyansk, and Kramatorsk should be expected.

Whether and where the Russian attack on the Donbas front can be brought to a halt is currently impossible to predict. Without massive support in the form of deliveries of artillery with a great deal of ammunition and propellant charges, armored vehicles, and other long-range weapons, the Ukrainian armed forces will be hard pressed to succeed.

Shortly after the beginning of the war, the Russian advance on Mykolayiv stalled with the bridge over the Southern Bug River strategically important for the direction of Odesa. This created an extraordinarily wide 500km (311 miles) front in the south of Ukraine, on the western bank of the Dnipro River.

The area between Mykolaiv and Krivoy Rih and the western bank of the Dnipro near Kherson and Nova Kakhovka, consists largely of flat steppe without natural boundaries such as ridges or bodies of water.

Ukraine has moved to counterattack here, but so far lacks the necessary weapon systems and cannot yet build a superiority to make decisive breakthroughs. Unlike the orderly retreat in northern Kyiv, the Russians are fortifying their defensive positions and fighting hard to hold captured territory.

Both sides have supply problems on the very long front. However, at least the Russian-held cities of Kherson and Nova Kakhovka, located directly on the Dnipro River, are receiving reinforcements and supplies from Crimea.

The advance across the steppe, settlement by settlement, is associated with very high losses for Ukraine. Overall, Ukrainian forces are advancing very slowly on this front.

In principle, a more powerful Ukrainian counterattack seems possible here, with the initial goal of pushing the Russians back to the eastern side of the Dnipro. However, sufficient personnel reinforcements, armored vehicles, battle tanks, and artillery as well as ammunition and fuel must first be stockpiled to make this possible.

Despite widespread reports of Ukrainians reaching the border, Russian forces remain on Ukrainian territory in northern Kharkiv. Kharkiv city continues to be shelled with airstrikes, and at least with rocket artillery.

Command and communications structures, supplies, and logistics for Russian forces operating here are located on Russian territory and are beyond the range of current Ukrainian weapons systems.

Any further Ukrainian advance brings the risk of very high casualties and only seems possible if a large preponderance of armored vehicles, battle tanks, and artillery support can be massed.

What does Ukraine need to withstand the “fire roll” on the Donbas front (1) and to conduct successful counterattacks in the direction of Kherson (2) and near Kharkiv (3)?

Of central importance are as many armored vehicles as possible, to prevent injuries and casualties on the move. Shrapnel and fragments are a huge danger due to constant shelling.

So far, a variety of armored vehicles have been delivered, mainly Soviet-designed systems, M113 derivatives, and infantry mobility vehicles from the Czech Republic, Poland, the UK, the Netherlands, Estonia, Lithuania, and Australia.

The delivery of a few hundred more armored vehicles from the US, Denmark, Portugal, Spain, Italy, and Canada has also been announced, yet it is very likely that considerably more will be needed. The German Marder would also fall into this category.

The supply of 155mm caliber artillery with very large numbers of propellant charges and ammunition remains critical. The situation is slowly improving with the arrival of systems from the US, Canada, Australia, Estonia, France, Poland, Slovakia, and Norway, but the Russian side still remains clearly superior so far. German self-propelled howitzers will join the ranks when they arrive in Ukraine at the end of June.

Ukraine also urgently needs ranged weapons that can engage command and control and communications structures, as well as high-value Russian logistics targets. The US, UK, and Germany have announced the delivery of HIMARS and MARS rocket systems, respectively, in June 2022.

Ukrainian forces are forced to use ammunition sparingly amid the most brutal battles, while Russia has very large stocks, at least in artillery and rocket artillery. Massive efforts to dispatch short-, medium- and long-term ammunition supplies to Ukraine are urgently needed. This also applies to new ammunition production geared to Ukraine’s specific needs.

Where Ukraine is counterattacking, battle tanks are increasingly urgently needed in addition to armored vehicles, especially on the steppe in the south. So far, Ukraine has received more than 200 T-72Ms from Poland and the Czech Republic. As the war continues, medium- and long-term planned deliveries beyond these Soviet legacy systems will be necessary. (Spain, for example, is offering 40 Leopard A4 tanks.)

In addition, there will be the need for fuel, as well as often overlooked items such as smaller vehicles for internal supply lines and territorial defense.

Regardless of the heavy weapons discussion, it should be possible for countries like Germany to supply commercial jeeps, pickups, small trucks, minibusses, and quads, along with large quantities of gasoline and diesel.

A brief analysis of the course of the war and the situation so far shows that in order to achieve the goal formulated by the German government (that Ukraine must not lose) further, more extensive and more rapidly delivered military support is needed.

Nico Lange was Chief of the Executive Staff of the Federal Ministry of Defense until January 2022. Prior to that, Lange served in Ukraine and Russia. post@nicolange.eu

This text is an edited translation of Nico Lange’s German social media post.

A very impressive reportage describes the character of the war in this phase and the advance of the Russian “fire roller”: The Fight to Survive Russia’s Onslaught in Eastern Ukraine | The New Yorker

A still useful argument in support of Ukraine for a long war can be read here: Supporting Ukraine for the Long War – War on the Rocks

Donations can be made to the Ukrainian Armed Forces at the National Bank of Ukraine: NBU Opens Special Account to Raise Funds for Ukraine’s Armed Forces (updated) (bank.gov.ua)