Refusing entry to Russians may look like an appealing policy, but it could hurt the West’s friends and help its enemies. 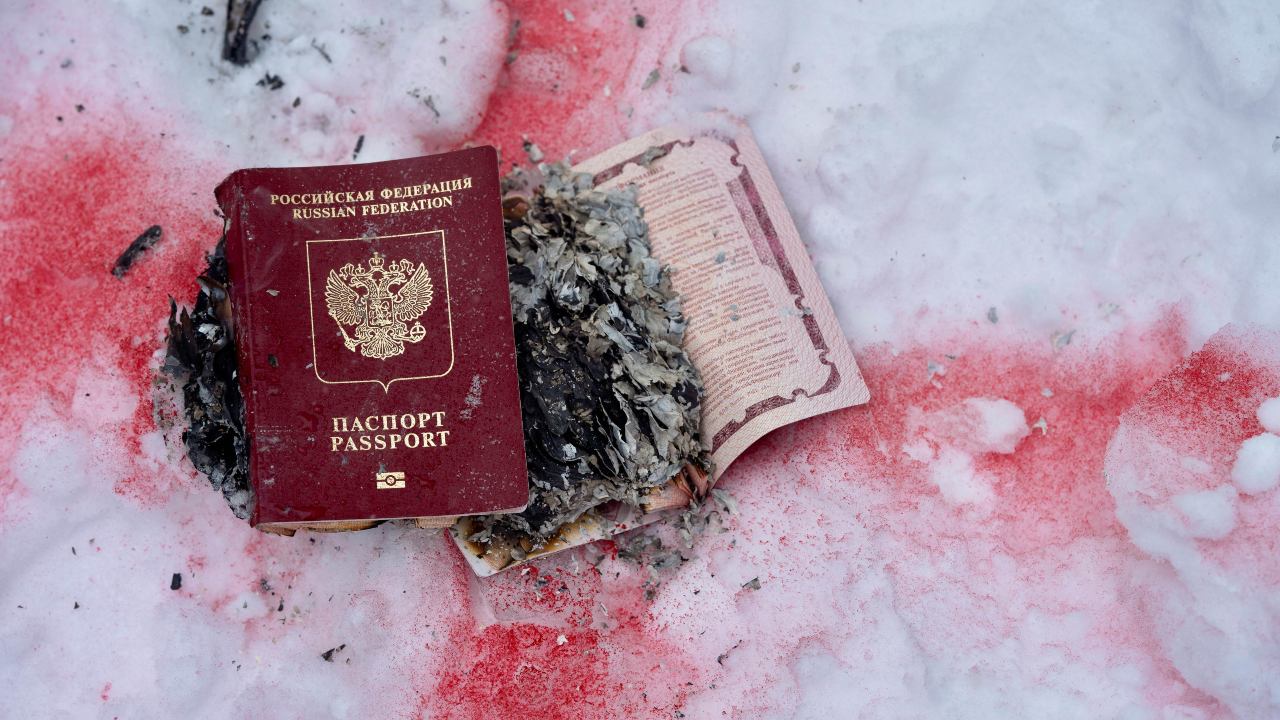 Photo: Canada, Montreal, 2022-02-25. Russian passports are burnt by their owners during a protest in support of Ukraine. Credit: Paola Chapdelaine / Hans Lucas.

There is increasing support for an outright ban on visas for Russian citizens hoping to enter the European Union, including tourist visas. The impetus came from Ukrainian president Volodymyr Zelenskyy, who called in an August 8 interview with the Washington Post for the West to close its borders to all Russians regardless of their support for the war, and to deport those who were already present.

Following Zelenskyy’s call, Estonia’s Prime Minister Kaja Kallas requested the implementation of a ban on tourist visas. In her words, “visiting Europe is a privilege and not a human right,” and therefore “the time is now to put an end to tourism from Russia.” Her words were followed by action on August 11, when Estonian authorities decided to cancel all previously issued Schengen area visas to Russians.

On the same day, the Latvian Sejm recognized Russia as a state sponsor of terrorism and called on European Union (EU) countries to immediately halt the issuance of tourist and other entry visas to the citizens of Russia and Belarus.

The question of denying the issuance of Schengen visas to Russian citizens is already under consideration by the EU, with the support of the union’s Czech rotating presidency. It is expected that a final decision on this matter will be taken by the end of August. In the meantime, the Antiwar Committee of Russia, which includes many well-known members of the Russian opposition abroad, commented that with all due respect to the emotions of Ukrainian society and people in Russia’s neighboring countries, calls for a visa blockade for all Russian citizens, including those opposed to the war, “have sad examples in recent European history and clearly play to the Kremlin’s advantage.”

Those comments received some unexpected backing from the Office of the Ukrainian President. Advisor to the head of the Office of the President, Mykhailo Podolyak stated that Russians “who bear the great burden of fighting Mr. Putin, the political regime, and taking an anti-war stance” should receive support and “all the tools to conduct their fight against the Russian authoritarian system of power” abroad. At the same time, he said that he favored an individual approach to the evaluation of each person according to his actions and therefore believed that only Russians who support the war should be deported from Western countries.

Russian opposition journalists say something similar. They argue that some Russians really should be told “the way into Europe” is closed, especially Russian propagandists. This might be expanded to include those categories of Russians who, in the event of a regime change, would inevitably be caught by vetting of collaborators.

These might include those working for the government or municipal authorities and propagandist media (including at the regional level); organizers, authors, and speakers of various “patriotic” and “military-patriotic” forums and manuals; pro-government experts and ideologists; military, law enforcement, and judges; employees and lobbyists of state corporation; and so forth. Not all of them are on the sanctions list, but they certainly bear their share of responsibility for the war in Ukraine.

But banning entry to every Russian without exception, including those threatened with criminal prosecution in the home country, violates the basic Western principle of a behavior-based approach about which Mykhailo Podolyak spoke. It would be strange to make policy on the basis of accidents of birth rather than established behavior.

An all-encompassing ban would also play into Putin’s hands. Almost every regime opponent still inside Russia is vulnerable to a criminal case alleging false statements about the Russian army, and all face long prison terms. It is hardly realistic to suppose that those locked inside Russia with no hope of escape would actively fight against Putin.

Moreover, such sanctions have no practical effect on those who support the war. According to statistical data, the vast majority of Russians do not travel abroad. As of 2022, only 30% of Russians have a passport for international travel, and 76% have never been abroad. According to tour operators, Russians traveling abroad mainly head to Turkey, Egypt, or neighboring countries, which are unlikely to issue visa bans.

It’s those who have never been to the West who form the core of support for the war, and a ban on Schengen visas will not affect them in any way. On the contrary, a minority of the most progressive-minded Russians are leaving for Europe.

Russian support for the Putin regime is conformist in character. Thus, once locked up in Russia, even people who previously did not want to work for the regime might begin to do so. This included talented engineers, scientists, journalists, and many other Russians who, under different circumstances, could leave. This would give the regime a serious intellectual resource.

There are other risks, not least that Russians already abroad will feel the change of mood and head home, or may lapse into silence. We should see the Russian diaspora as a resource, as the seedlings of a new and open democracy rather than as a threat or as an extension of Putin. Why lose their knowledge, talents, and experience?

It is perfectly sensible, indeed a good idea, to enforce visa restrictions. But this must be carefully calibrated in order, on the one hand, to inflict maximum damage on people who support Putin and participate in his crimes, and on the other hand, to uphold our principles while denying the aggressor an additional resource.