Ukraine: Defiant, Against All Odds

Those who cannot remember the past are condemned to repeat it. – George Santayana 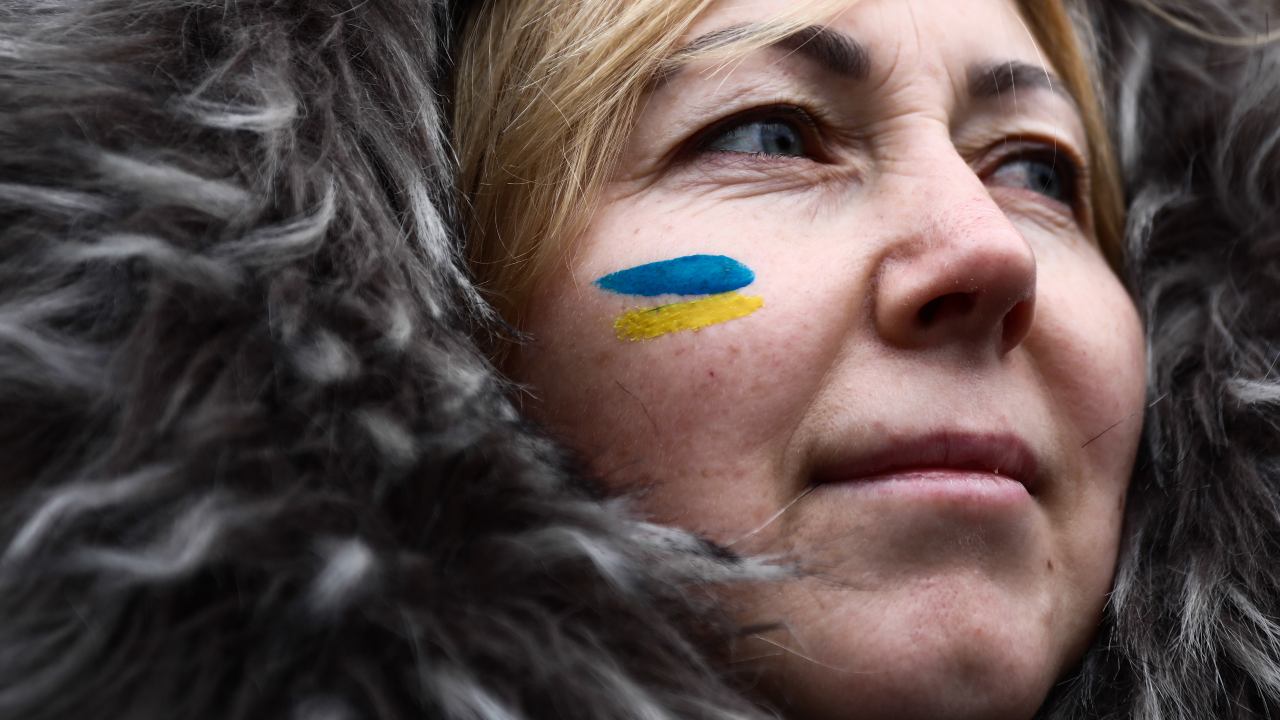 Photo: A woman with a Ukrainian flag painted on her cheek attends a protest against Russian aggression to Ukraine, in Krakow, Poland on February 20, 2022. The demonstration is organized as the Russian-Ukrainian border tension continues. Credit: Jakub Porzycki/NurPhoto

During the Peloponnesian Wars, Thucydides chronicled the story of the inhabitants of the island of Melos, a colony of Sparta, but one that maintained its neutrality during the conflict between Athens and Sparta. Taking advantage of an interim truce with Sparta, in 416 CE, the Athenians sent an army to Melos with an ultimatum—surrender and align with Athens, or be annihilated.

Faced with this incontrovertible choice, Melos attempted to reason. At first, they professed their neutrality, pointing out that Melos presented no clear and present danger to the better equipped, more formidable Athenians. Unwilling to negotiate, the Athenians disregarded Melos’s sovereign claims and denounced the island as a threat as long as it remained outside the Athenian camp.

In 2022, the sovereign democratic country of Ukraine faces a similar choice from Vladimir Putin’s Russia. In Russian, Ukraina means borderland, and Putin sees no difference between the borders of the Russian Federation and the border of Ukraine. In other words, Ukraine is simply Russian territory on the periphery of the Russian Federation—one land, one people, one nation. Putin intends to re-assimilate Ukraine with or without a fight. He has placed the Ukrainian people on notice with a unilateral declaration of independence for the disputed Ukrainian territories of Donetsk and Luhansk.

In 416 CE, the Melians maintained that surrendering without a fight would demonstrate a lack of courage on their part and therefore would not submit. The Athenians reminded the Melians of the overwhelming odds, and that resistance would lead to an outcome much worse than feelings of guilt or shame.

During his impassioned speech last weekend in Munich, Ukrainian President Volodymyr Zelenskyy reiterated his nation’s sovereignty, and emphasized its right to self-determination. His rhetoric and demeanor flew in the face of unreasonable Russian demands. Furthermore, he expressed frustration at failed attempts to negotiate directly with President Putin or the Russian Federation through multiple avenues of approach, including the Minsk accords and the Normandy format. Despite the fact that 190,000 Russian troops are exercising just outside Ukraine’s borders, Zelenskyy appealed for calm in Ukraine. To do otherwise would make matters worse and lead to a run on Ukraine’s central bank and a refugee crisis of epic proportions across Europe.

Centuries before, the Melians believed that its colonial power, Sparta, would come to its aid. The Athenians derided Melos’ collective defense argument, maintaining that Sparta would only do what was in Sparta’s interest and that Melos remained low on the list of Spartan priorities.

Since 2008, Ukraine has pursued NATO membership and is a current Partnership for Peace nation of the alliance. It has not yet, however, been offered a Membership Action Plan (MAP) and therefore NATO membership is nowhere on the horizon. Accordingly, as a non-NATO member, Ukraine does not benefit from Article 5 of the Washington Treaty, i.e. an attack on one is an attack on all. Both the President of the United States and the Secretary General of NATO have made it clear that there will be no US or NATO boots on the ground during a potential conflict in Ukraine. Yet President Zelenskyy remained defiant in the shadow of Russian aggression, amplified his call to NATO for membership and requested immediate clarification from the alliance as to when this might be possible for Ukraine. In fact, he told the audience:

“We are told: the door is open. But so far authorized access only. If not all members of the alliance want to see us or all members of the alliance do not want to see us, be honest. Open doors are good, but we need open answers, not open questions for years. Isn’t the right to the truth one of our enhanced opportunities? The best time for it is the next summit in Madrid.”

Unfortunately, the collective defense of Melos was not a priority for Sparta, and neither is it for NATO in the case of Ukraine. To date, the alliance has done far too little to defend Ukraine.

In the final analysis, Athens forced an answer from Melos and the island people made the following statement to the Athenians:

“Our decision, Athenians, is just the same as it was at first.  We are not prepared to give up in a short moment the liberty which our city has enjoyed from its foundation for 700 years.  We put our trust in the fortune that the gods will send and which has saved us up to now, and in the help of men—that is, of the Spartans; and so we shall try to save ourselves, But we invite you to allow us to be friends of yours and enemies to neither side, to make a treaty which shall be agreeable to both you and us, and so to leave our country.”

Likewise, President Zelensky’s response to the threat of a Russian invasion was clarified in Munich:

“We will defend our land with or without the support of partners. Whether they give us hundreds of modern weapons or 5,000 helmets. We appreciate any help, but everyone should understand that these are not charitable contributions that Ukraine should ask for or remind of.”

In 416 CE, the Athenian response was swift and cruel. Its armies laid siege to Melos and it was surrounded. Soon thereafter, Melos surrendered as the Athenian army entered the city. The Athenians showed no mercy; all military-aged males were hunted down and executed. What was left of their families—women and children—were sold into slavery.

I fear that like the Athenians, the Russians will execute their plan for regime change in Kyiv and show no mercy. Ukrainians will fight boldly for their freedom, but the odds are overwhelmingly against them, unless NATO and the European Union do more to help. Otherwise, Ukraine may be the first domino to fall in a return to the consolidation of the former Soviet Empire.

James Foggo is Dean of the Center for Maritime Strategy at the Navy League of the United States; Distinguished fellow at the Center for European Policy Analysis, Retired Four-Star Admiral