Time to Offer Ukraine and Georgia a Path to NATO Membership

Both countries have sought to clean up the scourge of corruption and modernize their militaries, became regular participants in various NATO exercises, and discussed their interest in joining the Alliance. 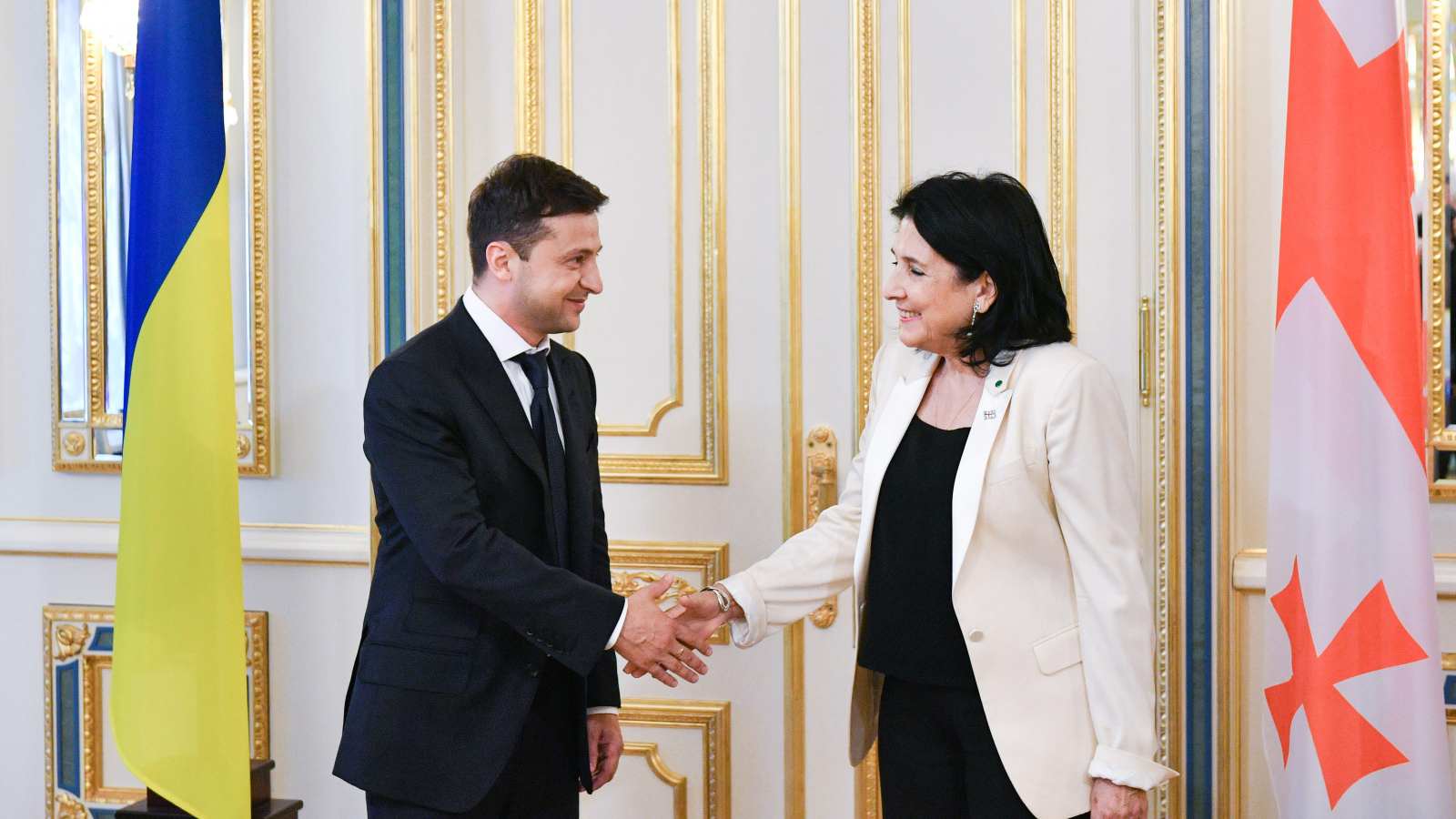 “What would you say to Joe Biden if he were sitting here?” Axios journalist Jonathan Swan asked during an exclusive interview with Ukrainian President Volodymyr Zelensky.

Without a moment’s hesitation, the Ukrainian president replied. “Mr. President, why is Ukraine still not in NATO?”

Zelensky is not the first Ukrainian to ask this question, nor will he be the last. During the 2008 Bucharest Summit, the United States and other NATO members discussed strengthening ties with Ukraine, and the eastern European state made strides toward integrating itself with the West. Ukraine’s efforts have ranged from implementing anti-corruption reforms (although these are far from complete) to rewriting its constitution to ensure that it can one day integrate with the West. Despite these efforts, Ukraine is still not a member of NATO.

Nonetheless, cooperation between Ukraine and NATO has deepened since the Bucharest summit. In 2009, the NATO-Ukraine Charter was signed, signaling that Ukraine would implement key defense reforms to become interoperable with the West. By the start of the Donbas conflict in 2014, Ukraine had been a regular participant in NATO exercises. This increased cooperation led to a series of crucial defense reforms, and the Ukrainian military has vastly improved its capabilities since that time. In 2020, Ukraine was promoted to the status of “NATO Enhanced Opportunities Partner.” It is only one of six non-NATO members to hold this title. Finally, Ukraine is the first partner nation to participate in NATO’s Response Force, demonstrating that the Alliance has high regard for the Ukrainians.

Georgia, equally eager to be an Alliance member, has also made substantial contributions to NATO. Following Russia’s military incursion into Abkhazia and South Ossetia in 2008, the Alliance created a framework with Georgia for “close political dialogue and cooperation in support of reform efforts and Euro-Atlantic aspirations.” Throughout this period, the country implemented anti-corruption reforms, although as in Ukraine the issue remains unresolved. In 2010, a NATO Liaison Office was opened in Georgia to demonstrate the importance of the relationship. Georgia also deployed a total of 11,000 soldiers throughout the course of NATO’s involvement in Afghanistan. Finally, like Ukraine, Georgia is one of NATO’s six Enhanced Opportunities Partners.

Given this progress, one might assume that NATO has presented Ukraine and Georgia with a membership action plan (MAP). Both countries have sought to clean up the scourge of corruption and modernize their militaries, became regular participants in various NATO exercises, and discussed their interest in joining the Alliance. These are all important steps in the accession process.

However, neither country has been asked to join NATO. They also do not have a MAP. Why is this?

First, some challenges come with joining NATO. According to the Study on NATO Enlargement, candidate states must resolve all international and territorial disputes before joining. Unfortunately, both countries have unresolved conflicts and this would make them ineligible. Even though the crises in Ukraine and Georgia were caused by Russia — since it invaded both countries — some of NATO’s more dovish members will not be willing to move on these points.

Second, the Study on NATO Enlargement states that candidates must “encourage and support democratic reforms, including civilian and democratic control over the military.” While Ukraine and Georgia have implemented anti-corruption reforms, and while they have bolstered their defense capabilities, both have a way to go until they meet these NATO standards.

Third, some of the Alliance’s European members fear that pursuing these enlargement discussions could escalate the conflicts. The Russian-led (and Kremlin influenced) factions in the Donbas, Abkhazia, and South Ossetia would likely increase tensions in response to any membership discussions with NATO. Some Alliance members also worry that NATO membership would drag the Alliance into an armed conflict with Russian forces.

Fourth, pursuing a MAP with Ukraine and Georgia will aggravate Russia. Should these former Soviet states agree a path toward NATO membership, Russia would likely increase its hybrid warfare efforts. Russia previously reacted aggressively to NATO expansion in the 1990s and 2000s. For example, following the admission of the Baltic States, Russia violated their air space. It also conducts military exercises near their borders, and has crippled their infrastructure through the use of cyberattacks. Poland has also faced the brunt of Russia’s hostility. The most alarming examples, however, occurred in the Balkans. As Montenegro and North Macedonia took steps to join NATO, Russia launched disinformation campaigns against these countries. It even attempted a coup against the Montenegrin government. Given this range of Russian action, up to and including the use of military force, the response to Ukraine’s and Georgia’s potential NATO membership could be grave.

Despite these criticisms and reservations, both countries have demonstrated why they should be invited to join. First, they are buffer states between Russia and the West. Throughout their respective conflicts, both have gained invaluable experience from Russia’s hybrid warfare tactics. While they endured heavy losses, both countries deterred Russia’s efforts, and they could pass along this critical knowledge and experience to the Alliance as NATO learns how to counter Russian aggression. Nothing substitutes for combat experience and Ukraine in particular has a huge amount.

Second, Ukraine and Georgia have regularly participated in numerous NATO exercises, and they were involved in NATO’s mission in Afghanistan. The sacrifices made, especially with the loss of life (34 Georgians were killed in Iraq and Afghanistan, and 18 Ukrainians), demonstrate that they are committed to joining the Alliance. Third, both countries underwent immense defense reforms so that their military capabilities are interoperable with NATO. This is a necessary step in joining the Alliance, as strengthening the Ukrainian and Georgian militaries will lead to a more secure and stable European continent.

Now, as Russian forces continue to mass near Ukraine’s borders, the MAP discussions for Ukraine and Georgia have resurfaced. Several Ukrainian and Georgian leaders have argued that establishing a MAP with NATO will help deter Russian aggression in the region. In his Atlantic Council piece, Ukrainian Foreign Minister Dmytro Kuleba argued that the “success of Ukraine and Georgia would demonstrate . . . that freedom and democracy are worth fighting for.” Similarly, Olga Stefanishyna, Ukraine’s deputy prime minister for European and Euro-Atlantic integration, argued in Foreign Policy that pursuing Ukraine’s NATO integration will help lead to a free and prosperous Europe. Finally, in a joint press conference with NATO Secretary General Jens Stoltenberg, Georgian President Salome Zourabichvili reiterated that Georgia has “shown its dedication to reaching the ultimate objective” of integrating with NATO.

Most recently, the Biden administration stated that it is “committed to ensuring that NATO’s door remains open to aspirants when they are ready and able to meet” the membership requirements. This could be applicable to Ukraine. U.S. Secretary of State Antony Blinken also visited the eastern European state this week, where he announced that the Pentagon is “looking at what additional assistance . . . would be helpful to Ukraine.” This could include additional lethal military assistance to the Ukrainians as they continue their fight against Russian aggression.

Overall, Ukraine and Georgia have endured a series of hardships caused by Russia. It is possible that these conflicts might not have occurred had Ukraine and Georgia been invited to join the Alliance. The Baltic States are an example of this case. Had NATO forces been stationed in Ukraine and Georgia, it is unlikely that Russia would have annexed parts of their territory.

Nonetheless, Ukraine and Georgia are committed to joining NATO. Through their continued resilience, dedication, and hard work, both countries would be welcomed additions to the Alliance. Their vast knowledge and experience of Russian hybrid warfare would be a valuable asset to the Alliance, and both will surely contribute to NATO’s mission of guaranteeing freedom and security throughout the world.

It is time for the United States and its allies to invite Ukraine and Georgia into NATO. Presenting them with a NATO MAP would be a valuable first step.

Mark Temnycky is an accredited freelance journalist covering eastern Europe and its impact on U.S. and European foreign policy and national security. His articles have been published by the Atlantic Council, the Wilson Center, the Center for European Policy Analysis, Forbes and the Diplomatic Courier.