Time Is Running Out in Ukraine

Russia’s plans for Ukraine include options including full-scale invasion to redraw the European security map. The West has limited response options. 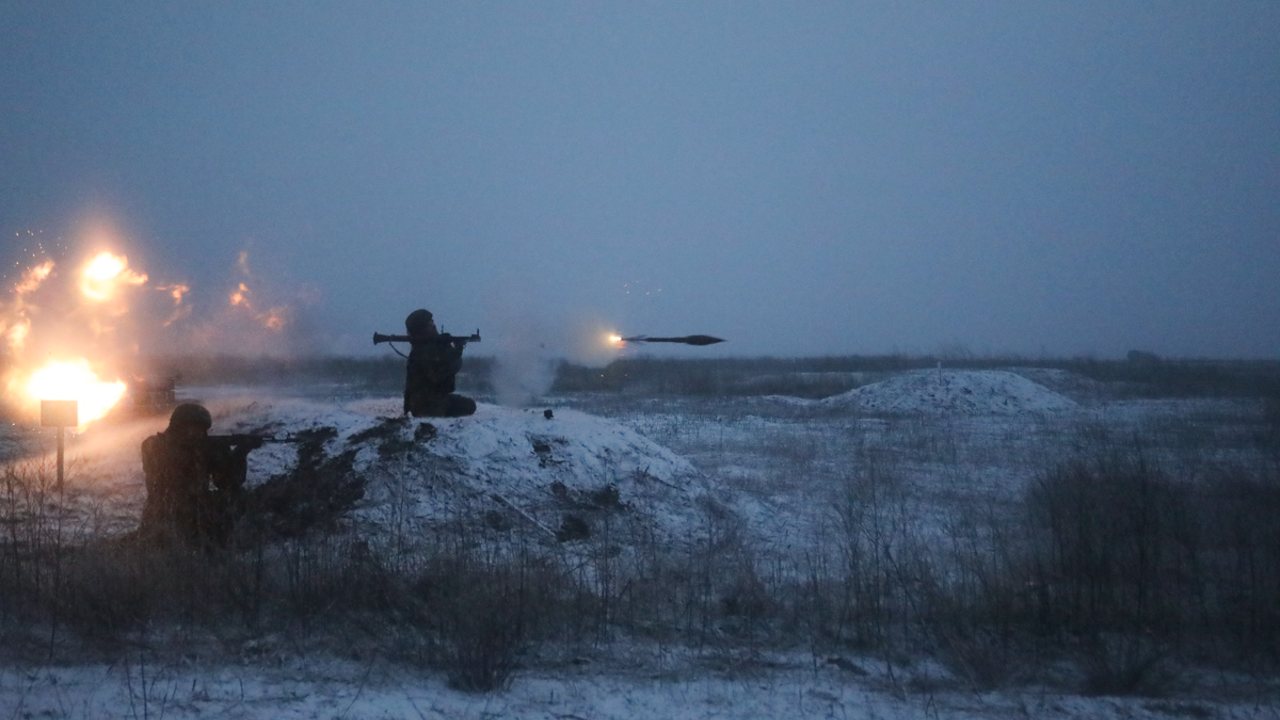 Photo: Qualifying stage of the Masters of Artillery Fire competition among soldiers of the 150th motorized rifle division of the Southern Military District. Credit: Ministry of Defense of the Russian Federation

Sometimes the writing on the wall is so large it is ignored. Russia’s goals are clear, if rarely acknowledged in full. The current Kremlin-manufactured crisis is as much about NATO and wider Transatlantic security as it is about Ukraine. President Vladimir Putin wants his neighbor broken and weak, politically subdued, and unable to join the Euro-Atlantic community once and for all. It is a hostage; both the object and the subject of talks between Russia and the United States.

Russia hopes to achieve American concessions regarding “mutual security guarantees” and the future of NATO. It sees an opportunity to exploit what it sees as Western division and irresolution, to humiliate the West and achieve a “legacy moment” for Putin by clawing back some of what was lost by the Soviet Union’s defeat in the Cold War.

The use of military force as a foreign policy tool has been demonstrated by the Kremlin many times since the end of the Cold War. The Russian General Staff plans for all contingencies, from the use of non-kinetic means (such as cyber warfare) to a full-scale invasion.

Multiple military scenarios have been laid out. For instance, a maximalist plan would be an operation against Ukraine with combined air and ground artillery strikes to destroy the ability of its armed forces to communicate, move and fight. This could be followed by a land-based offensive aimed at quickly seizing territory and holding it, with the help of counter-insurrection operations against Ukrainian units assigned to pop up behind Russian army lines.

To achieve its political-strategic goals with Ukraine (the full and comprehensive implementation into the Ukrainian constitution of Russia’s interpretation of the 2015 Minsk 2 agreements, effectively partitioning Ukraine, and/or obtaining a “never-NATO pledge” from the Atlantic Alliance) Russia might even go as far as regime change.

Many analysts reasonably point to the high costs; Russia’s economy would suffer and domestic support for costly military action would probably wane. These are valid arguments, but they need to be considered in light of the latest developments.

First, there is little reason to believe Russia has gone to such extreme lengths simply to deceive, bluff, and bully Western policymakers. Russia does not need to mass the largest concentration of troops in Europe since World War II to prove a point.

Recent deployments close to Ukraine’s borders and in Belarus look increasingly like an invasion force. No army moves blood supplies, food, and fuel to the frontline, or prepares alternative energy supplies, if it has no intention of fighting; and soon.

Furthermore, this month’s joint military exercise between Russian and Belarusian forces (Allied Resolve) must also be understood as part of potential war preparations, especially deception operations. Sending Russian troops wearing Belarusian uniforms into Ukraine does not sound improbable anymore, given past use of “little green men” tactics in Crimea and Donbas. Belarusian leader Aliaksandr Lukashenka has threatened that Belarus would “go to war” if Russia is “attacked”, a definition with an elastic interpretation.

Second, Putin cannot be seen to back down. The stakes are now too high, and there is little hope the Kremlin will simply withdraw its forces without obtaining some, if not all, of its demands from Ukraine and NATO.

The Russian political and military leadership has a clear, desired end in mind. The West, on the other hand, does not know what “success” looks like for the Kremlin, and underestimates its ambitions and appetite.

The Russian population, meanwhile, though also afraid of a large-scale war, has largely been led to believe (through an almost-unchallenged pro-government media) that NATO is responsible for creating the crisis. Russia’s notoriously obedient state media are also accusing Ukraine of provocations that could yet give Russia another excuse to act.

Russia is seeking to exhaust the diplomatic path before deciding precisely which military option to take. Yet the West risks falling into a diplomacy trap: where it becomes so important to give diplomacy a chance that Russia is simply given more time to mobilize.

Military action is now very likely, but it is not pre-ordained. Western policymakers still have the time to find better ways to respond.

The threat of increased sanctions is not enough. NATO reinforcements to frontline states are also unlikely to be a game-changer. Furthermore, continued Western military assistance to Ukraine, however useful, seems too little, too late. The Kremlin factor them in but they are unlikely to alter the final cost-benefit calculus of further aggression against Ukraine.

This situation is worsened by the fact that there is no united or coherent Western policy response. President Emmanuel Macron’s proposal to restart the Normandy Format for Ukraine negotiations (with Ukraine, Germany, and Russia) would be a sensible proposal if dealing with anyone other than the Kremlin. This is an example of possible diplomatic miscalculation, where apparent Western goodwill ends up playing in Russia’s favor as signals get crossed.

Then there are unfeasible ideas, such as the US seeking help from China to pressure Moscow. The Atlantic alliance has already made it clear it will not intervene to offer Ukraine direct military assistance. Indirect assistance has its uses, but as with Germany’s widely derided offer of 5,000 helmets, it also has obvious limitations.

A multilateral, non-NATO, “coalition of the willing” could be explored to strengthen military assistance to Ukraine. This is a dangerous option, but one of the only ways to get the Kremlin’s attention at this stage and show Western countries will not abandon their friends in Ukraine. Western policymakers also need a plan B — namely how to assist Ukraine should war break out — from medical help to supporting refugees.

Eastern Europe has become a powder keg, vulnerable to military accidents and diplomatic miscalculation. If it comes to war, the best the West can hope for is to contain it — accepting the fire will burn in Ukraine but trying to prevent it from spreading. It seems a poor outcome for 21st century Europe.

Mathieu Boulègue is a Research Fellow with the Russia and Eurasia Programme at Chatham House – The Royal Institute of International Affairs.