Time for US Suits on the Ground at Embassy Kyiv

Following Russia’s defeat in the Battle of Kyiv, calls have increased from politicians and pundits to reopen the US Embassy in Ukraine’s capital. 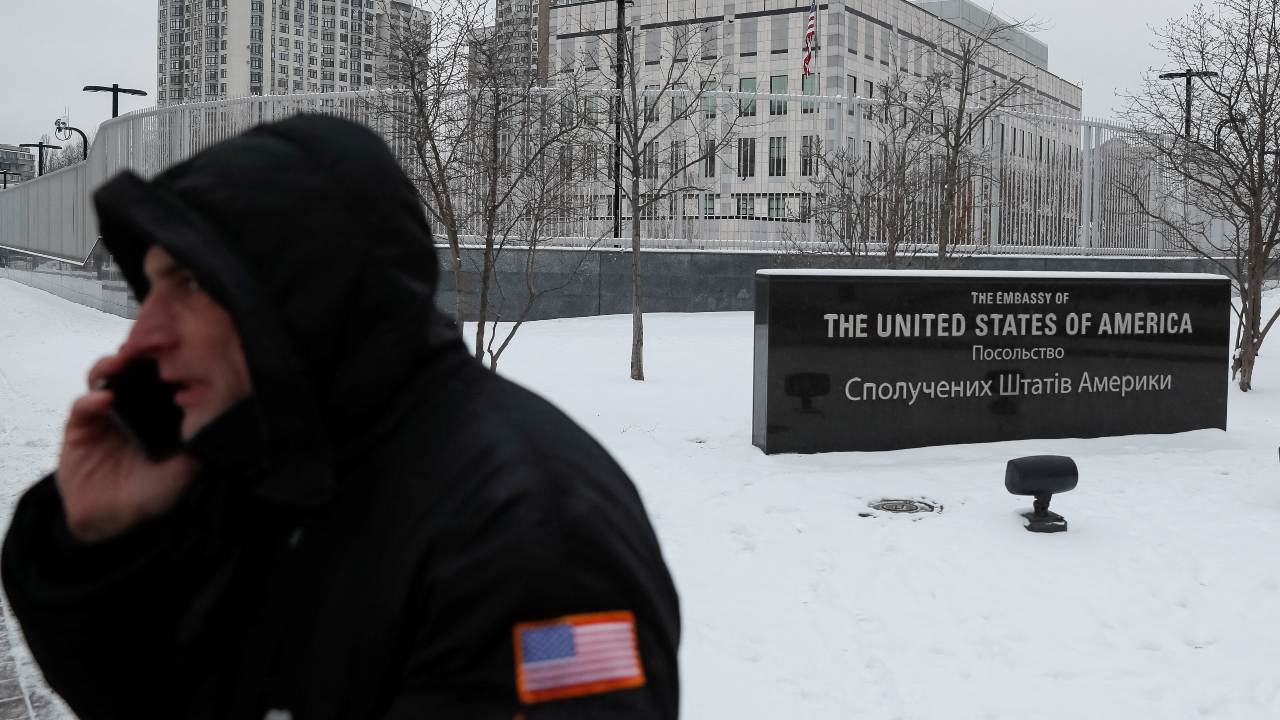 Photo: A security guard speaks on a mobile phone outside the U.S. embassy in Kyiv, Ukraine January 24, 2022. The United States said in a statement it was ordering the departure of eligible family members of staff from its embassy in Ukraine and said all citizens should consider leaving due to the threat of military action from Russia. Credit: REUTERS/Gleb Garanich.

The mission closed (in State Department parlance, “suspended operations”) on February 28, four days after Russia’s newest and biggest invasion was launched. Some staff were briefly relocated to Lviv in Western Ukraine, and then moved to Poland. Following Secretary Blinken and Secretary Austin’s April 24 lightning visit to Ukraine, the former said that the US hoped to return diplomats to the former city shortly and to the capital “as soon as feasible.”

I believe the US can and should put American diplomats – suits on the ground – in Ukraine’s capital right now.

Some nations kept their embassies open (at least nominally) in Kyiv, or announced a resumption of operations as the tide of battle turned and Russia last month announced its withdrawal from the failed attempt to capture Ukraine’s capital. The UK stated on April 22 that it will reopen this week, following several other European nations. Some of these embassies are quite skeletal – an ambassador, an officer or two, and a flag. But their flags are flying. So why is the US Embassy still closed?

As I’ve written previously, the US relies on a National Security Council-led interagency process to decide when to reduce or suspend staffing and operations at a diplomatic mission under threat. While bureaucratized, the process can move quickly, especially when bombs are falling and tanks are rolling. Embassies and agencies invest heavily in planning for how they will react to different flavors of crisis, deciding in advance the decision points that would lead to consideration of a drawdown.

The process also works in reverse, with advance thought given to what conditions need to be in place to bring back evacuated staff and families, and resume some operations (e.g. visa services) cut off during the crisis. If there has been, say, an outbreak of civil disorder following an earthquake, or street fighting in the context of an attempted coup, decision-makers will have to decide when the risk of return is outweighed by the benefit. Not every decision to close or reopen an embassy will reach the President’s desk, but one as sensitive as Kyiv certainly will. So what factors is Biden likely considering?

At face value, it would seem the key reason Embassy Kyiv is operating from Poland is to keep the staff out of harm’s way. This is part of the traditional cost-benefit analysis, and implies that as the security situation improves in Kyiv, the US will move toward resuming in-country operations. I expect this is a daily topic of interagency discussion in Washington and with our superb charge d’affaires (acting ambassador) for Ukraine, Kristina Kvien.

State Department spokesman Ned Price stated on April 14 that the absence of personnel on the ground has “in no way hampered” coordination with Ukrainian officials. Certainly, the continued high-level engagement is a vital sign of American support for Ukraine.  President Volodymyr Zelenskyy, a master communicator, knew the importance of high-level personal engagement when he launched his Zoom tour of Western parliaments to plead Ukraine’s case for weapons and sanctions.  But if presidential phone calls and meet-ups at conferences and occasional high-level visits – all important – are the be all and end all of diplomacy, why reopen Embassy Kyiv at all?

Let’s remind ourselves why embassies exist.

Embassies protect a country’s citizens abroad, pursue economic and security interests, and  promote a country’s values: in the case of the US, that is supposed to mean the pursuit of peace, justice, democracy, and prosperity. To do this right, the US has long maintained you need embassies in place to build and establish relationships. As a superpower, we have global interests, as well as many more citizens living and traveling abroad than most countries. That’s why the US, unlike many countries, maintains embassies (and in larger countries, consulates too (as embassy “branch offices” outside capitals) in almost every country, despite the expense.

I will acknowledge that not everyone on the planet embraces the US presence.  There is an old joke you’ll hear in expat circles: “Why is the US the only country in the world where there has never been a coup?  Because Washington doesn’t have a US embassy to stir the pot.”  (This was funnier before January 6.)  Every few years, someone argues that technological advances have rendered embassies obsolete.  In 1992, third-party presidential candidate Ross Perot pledged to replace the State Department with a fax machine through which he could issue mandates to foreign governments.

Some diplomatic functions can indeed be carried out at a distance.  During COVID-19, embassy officers worldwide (like most white collar workers) spent little time in their offices and communicated with local contacts from home, rather than face-to-face.

But there is no substitute for human contact. My experience is that you can maintain existing relationships over Zoom much more easily than you can establish trust with someone you’ve never met. People also tend to be more forthcoming in person. Having a permanent presence also makes it easier to break out of the trap of speaking only with host officials, and to broaden contacts to include civil society leaders, opposition politicians, and “ordinary citizens.” And those who dismiss the presence of an embassy as “symbolism” discount the importance of symbols.

I think there are three reasons behind the US reticence.

How to fix this?

Reopening would not mean hundreds of staff inside the embassy compound, listening with one ear for the sound of incoming shells.  As noted earlier, embassy staff learned during the pandemic to be nimble: to work from home or off-site locations, and visit the embassy only occasionally. It would though be important for American diplomats in Kyiv to be seen visiting Ukrainians in public venues, not just huddling with officials in offices.

Only a small number of American personnel — as few as a dozen of the Charge’s American political and defense staff, supplemented by security and by some of the invaluable Ukrainian staff — would really be needed. Other mission elements could continue to function remotely.

As for the Russians and the specter of Benghazi, I would advise the President to go on TV, announce a return and say something like this:

“My fellow Americans, this step will strengthen our operational coordination with President Zelenskyy’s government and demonstrate the strength of our commitment to the people of Ukraine and its neighbors.  Very shortly the Stars and Stripes will fly again in the heroic city of Kyiv.

He might add: “We have to be realistic.  Service in a war zone, in or out of uniform, carries risks.  I promise you that if, despite our best efforts, there are casualties among the American and local staff of our embassy, there will be a full, transparent, and public after-action report.  I will welcome active, bipartisan involvement by Congress in this process.  I will not allow concern that such a process may become politicized to stop me from taking the necessary measures to protect the United States and our partners abroad.  I trust the American people to understand this.”

The President would need to warn off Russia from taking hostile action, paired with a promise of fierce retaliation should he so do.

In my best-case scenario, President Biden would deliver these remarks with the Democratic and Republican leaders of the Senate and House standing behind him in a show of solidarity.  That may be too much to expect.

Regardless, the time to act is now.

Ambassador Philip Kosnett (Ret.) represented the United States in Europe, the Middle East, and Asia in a career focused on international security and post-conflict governance. His assignments included Ambassador to Kosovo, Charge d’Affaires in Turkey and Iceland, Deputy Chief of Mission in Uzbekistan, and four tours in Iraq and Afghanistan.  He consults, writes, teaches, speaks, and designs simulation games on global affairs.