The Siege That Still Scars Russia 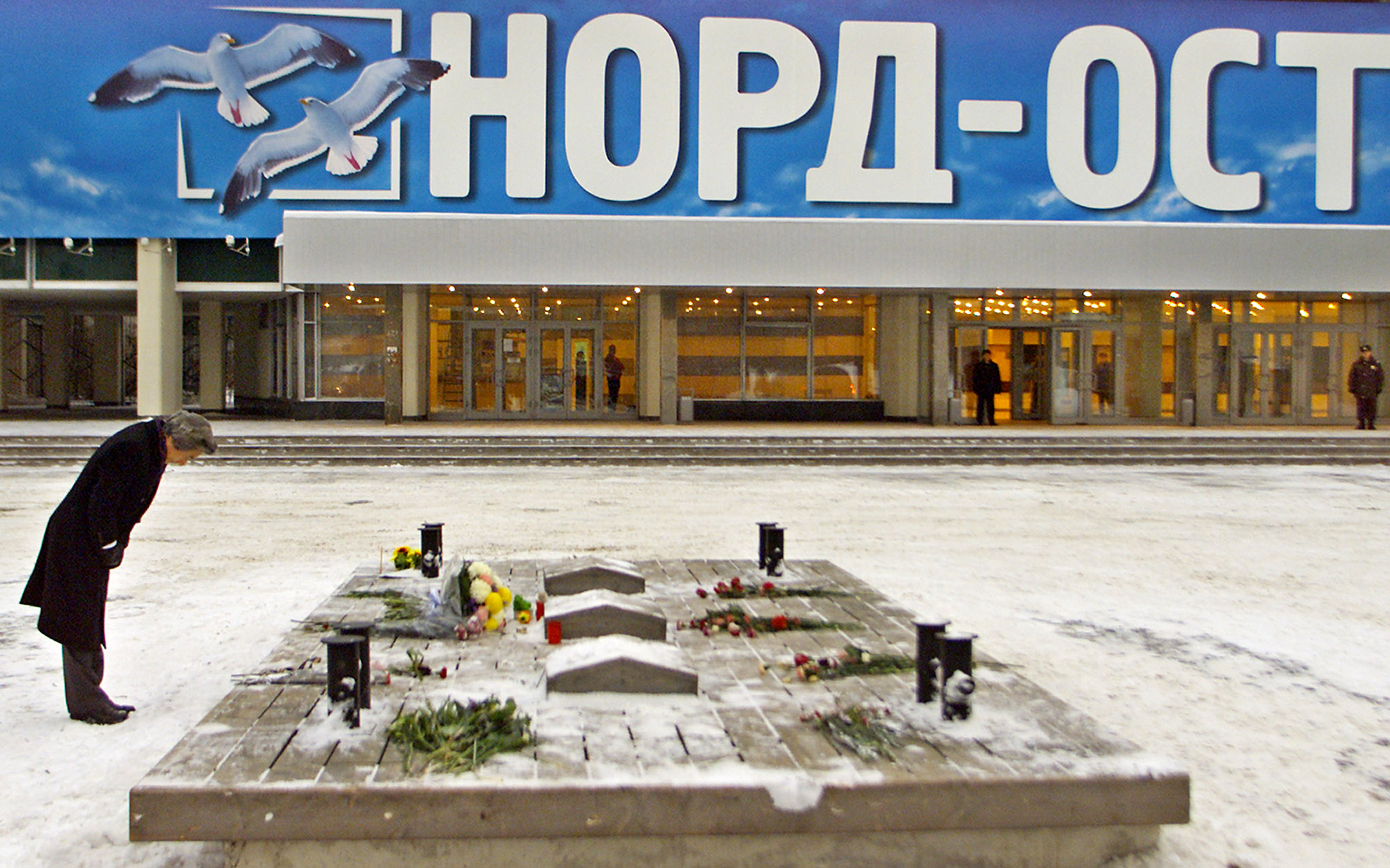 Photo: Japan's Prime Minister Junichiro Koizumi bows as he pays his respects at the memorial to the Nord-Ost theatre centre hostage crisis victims in Moscow, January 10, 2003. Koizumi on Friday demanded that North Korea go back on its decision to pull out of a global treaty aimed at stopping the spread of nuclear weapons. Credit: REUTERS AS/JDP

Some 20 years ago, in the early hours of October 26, 2002, we watched from a window as soldiers laid people on the ground, one after another, in front of the main entrance of an ugly Moscow theater topped with the sign “NORD-OST.”

It took some time to understand that, as the motionless lines expanded, and the troops began to pile people on top of those below, everyone we saw was dead. The storming of the theater by Russian special forces seemed to be over, but the true horror and the consequences were only beginning to emerge. Two decades later, the events of that day still mark Russian society.

The corpses were carried out on the third day of a tragedy that became known as the Nord-Ost hostage crisis. The terrorists had taken more than 900 people — including numerous children — hostage in the concrete building in Moscow’s Dubrovka district during the performance of Russia’s first Broadway-style musical, a show called Nord-Ost. The militants held hostages, 67 foreigners among them, for three days, demanding an end of the war in Chechnya. And for three days, Moscow agonized about the theater, now surrounded by troops and armored vehicles. The faraway war in Chechnya, which the new President Putin had promised would prove a quick victory, had arrived in the Russian capital. It was ugly and deadly.

We spent days near the captured theater, along with other journalists, and at night found a haven in an apartment overlooking the scene, which provided an excellent view of the theater and the square in front of it.

When the special forces assault finally occurred, we didn’t immediately realize that their entry had been preceded by the release of poisonous gas into the auditorium, a disastrous decision which, rather than knocking out the terrorists, killed more than a hundred hostages. But we did know that the FSB-led special operation to storm the theater had started with a lie.

For us, the silence of the final night was broken at 5 a.m. when the lights illuminating the theater’s entrance suddenly went out. It was a bad sign: the previous day, the terrorists had warned that if the lights were killed, they would assume an assault was underway. In the following 35 minutes, we heard a grenade explosion, followed by the sound of shattered glass, and machine-gun fire. At that moment, the radio broadcast the operations staff’s announcement that the operation had been triggered by the terrorists preparing to execute hostages and that they had fired the first shots. It was clear to those of us on the scene that this was not true.

Later that morning, while the buses were still rushing the injured and the dead from the theater to Moscow hospitals, the Kremlin proclaimed victory.

The authorities strongly discouraged any questions, including those about the nature of the gas and the planning of the assault, which left 131 hostages dead. The Kremlin attacked any media that tried to investigate why so many people were killed. The FSB opened a criminal case against us, alleging we had revealed state secrets, and an FSB operative, whom we knew pretty well, was asked to offer us a deal: stop your investigation of the special operation, and the FSB will stop investigating you. The Kremlin was adamant that the assault was a victory: the FSB, Putin’s beloved agency, acted decisively, the Chekists defeated terrorists, end of story.

The Nord-Ost tragedy was a pivotal moment for Putin and the FSB: it was not the first terrorist attack in Moscow under Putin’s watch (there were apartment bombings in September 1999, which some blame on Putin himself), but it was the first crisis in Russia’s capital where the whole world watched in real-time, with Putin under scrutiny as he faced the choice of whether to make every effort to save civilians, and risk being seen weak in the eyes of hardliners, or to counterattack, by the most brutal methods if necessary, and disregard casualties. He chose the latter.

The Russian security services learned several lessons from the events of October 2002; that they can lie with impunity, and that they would never be criticized, let alone punished for a failure unless that failure didn’t put the political regime at risk. And they got a license to attack the independent media at will. Not only was the assault on independent media fully supported by the Kremlin, and by Putin personally, but by Russian society too. The FSB harassed the relatives of Nord-Ost victims to keep them from talking to journalists, and even that was met with silence. No one was really bothered.

The terrified middle classes of Moscow and the big cities fully supported the Kremlin narrative, accusing journalists of vilifying the government and undermining stability. Society made its choice – as long as the FSB and other agencies delivered security, they would have a carte blanche from the Kremlin and Russian society. Their methods, however brutal, the special operations’ costs in human lives, however high, were excluded from public discussion. Without much debate or noise, society surrendered its right to hold the security services, and by extension Putin, accountable for their actions. This understanding became an essential element of the pact between Putin and Russia.

To be clear, this was not the first step that Russian society took as it began to slide towards its acceptance of authoritarianism. But it was one of the most significant advances along that road, a road that eventually led to a war of aggression, exclusion from the international community, and the beginnings of the complete collapse of Russian society.