The Russian Birds, a Political Thriller

Hunting is a popular pastime in Russia. But as with so much else, the elite grants itself special rights. 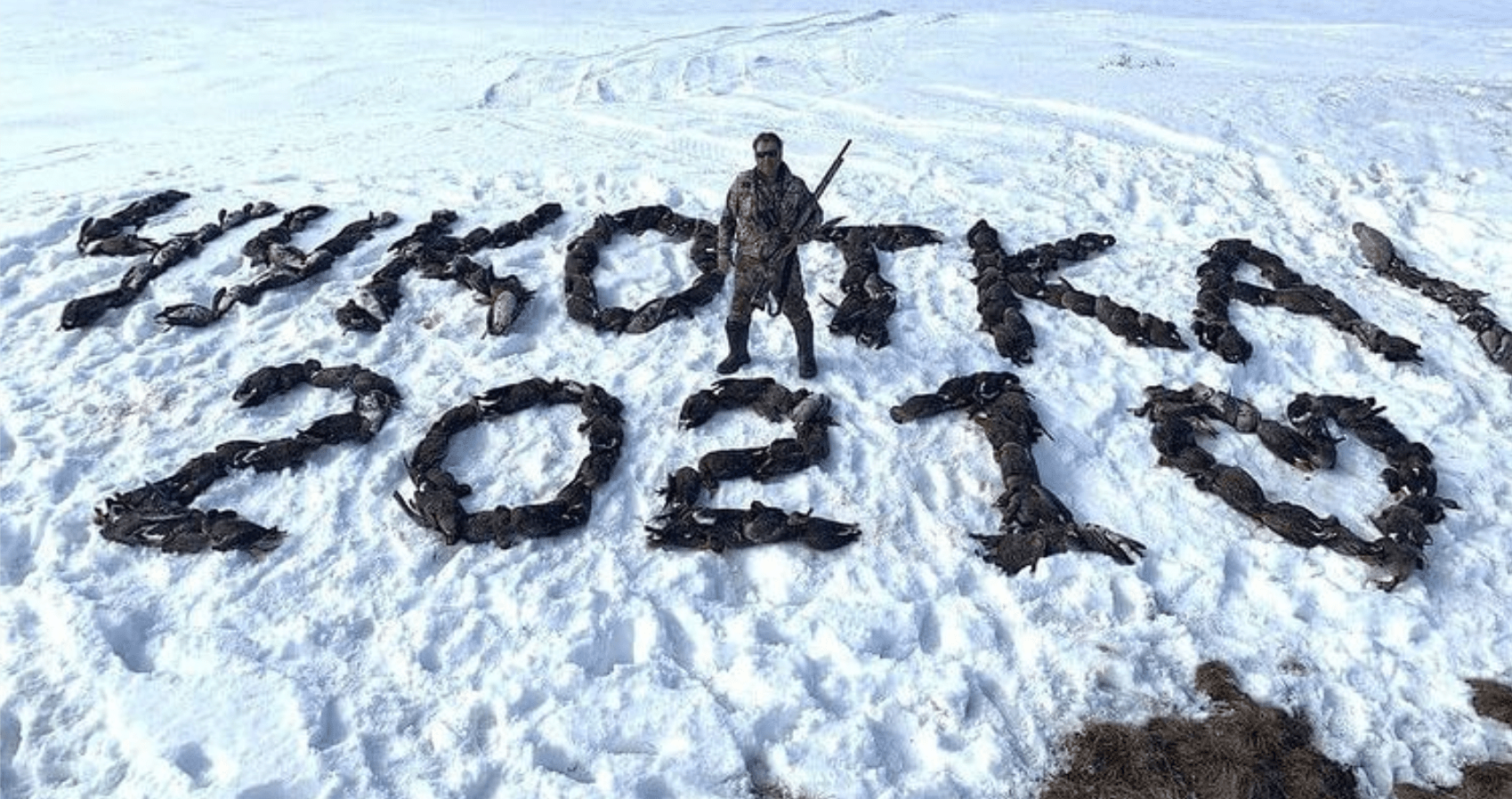 Photo: Aleksandr Kramarenko holding a hunting rifle and standing in the middle of a snowy field where what appeared to be almost 200 dead wild birds were arranged to spell out the words "Chukotka 2021". Credit: @hunting_in_siberia/Instagram

In November, 66-year-old Communist Party Deputy Valery Rashkin was charged with illegal hunting after killing an elk. He was found with a knife, parts of the deceased creature, and a demeanor which the police interpreted as alcoholic inebriation. He was arrested and his Duma immunity withdrawn. Perhaps not coincidentally, Rashkin had been alleging that September’s widely derided Duma election had been rigged by the Kremlin.

In one way, his arrest was unsurprising — Russia has laws about when and how wildlife can be hunted and they should be applied without favor. In reality, it’s a big deal when a leading parliamentarian is arrested and prosecuted given the latitude extended to deputies from President Vladimir Putin’s United Russia party, who have a deserved reputation for the mostly consequence-free slaughter of wild animals.

The phenomenon is so widespread that over the past few years, Russian media has started calling them “VIP hunters.” These officials constantly breach hunting regulations, ignoring restrictions both on the type of animals (some endangered) that can be hunted, the number, the time of year, and the reason they can be hunted.

So when a United Russia deputy called Alexander Kramarenko featured in social media images spelling out the words “Chukotka 2021” using the corpses of nearly 200 wild birds culled on one of his Arctic hunting expeditions, it might have been expected that he too would have been arrested, along with United Russia colleagues allegedly on the same trip.

But this did not happen. After officials initially explained they could not identify the man in the photos, Novaya Gazeta discovered Kramarenko’s name and then published further details including his ownership of at least four apartments, a plot of land, several businesses (including 15 “non-residential” premises), two Lexus cars and a Land Cruiser. Kramarenko was subsequently placed under investigation and suspended by his party, but the case never made it to court. Just before Christmas he was found dead in his office, having suffered an unstated number of gunshot wounds.

United Russia deputy Denis Khakhalov, from the Kurgan region was also hunting in April when he encountered a white wolf, which he ran over repeatedly with a snowmobile, while his friends filmed the animal’s slow death. The cameraman then shoved a rifle in its mouth, laughing as it bit the barrel. As Novaya Gazeta recently reported, photos from the same excursion suggested four other wolves had been tortured to death, Novaya reporter Alexey Tarasov wrote. Khakhalov was later acquitted.

The seeming freedom of party officials to hunt without consequence contrasts with the treatment of indigenous peoples, who complain that their traditional rights are under attack. In December last year, Andrei Danilov, a member of the Sámi indigenous group took the government to court for denying him the right to hunt without a license (indigenous groups are legally exempt from this requirement.) Such groups hunt for sustenance and survival.

Novaya has also found that endangered “Red Book” animals have likewise been targeted by the “VIP” hunters. Among these creatures are polar bears, bison, and a Caucasian wildcat. Other at-risk categories of animals were excluded from the Red Book following lobbying by hobby hunters.

The accounts that emerge from these hunting parties are not pretty. “We arrived in the evening, got drunk to death . . . [in the morning] we somehow managed to pile into our cars, arrive, tumble out and blazed away at everything that moved: ducks, cranes, crows . . . We drank some more, tumbled into our cars, and drove away,” according to one recent account of a regional officials’ hunt. In that case, their hunting “bag” of birds was left to rot where they had fallen.

The case of Communist deputy Rashkin received an inordinate amount of state media coverage (four hours and 26 minutes of airtime, by one account), especially in comparison to the United Russia deputies’ crimes, which were hardly covered by state media. According to Article 258 of the Criminal Code of the Russian Federation, Rashkin faces a fine of 500,000-1m rubles ($6,785-$13,570), or three to five years in prison.

Other State Duma deputies, Nikolai Valuev (United Russia), who was suspected of illegally hunting beaver, and fellow party member Vitaly Krasnoshtanov (detained with six roe deer carcasses in his trunk) have not faced consequences for their actions, as Communist Party deputy Sergei Obukhov has pointed out. Indeed, Valuev was one of a group of lobbyists who last year successfully managed to legalize hunting in an enclosed area. And there has been no action against the Interior Ministry’s anti-corruption head in Vladivostok, Ilya Kortchevets, who was present but not involved when poachers shot a rare Siberian Tiger in November in a remote region of Manchuria.

Novaya recently found that while there have been several court cases involving animal poaching and official abuse of position, none have resulted in serious judicial action.

Aliide Naylor is the author of ‘The Shadow in the East‘ (Bloomsbury, 2020). She lived in Russia for several years and is now based in London, working as a journalist, editor and translator.