The Righteous Glorification of Volodymyr Zelenskyy

A few months in modern politics can be a short forever, as Ukraine’s President Volodymyr Zelenskyy shows. 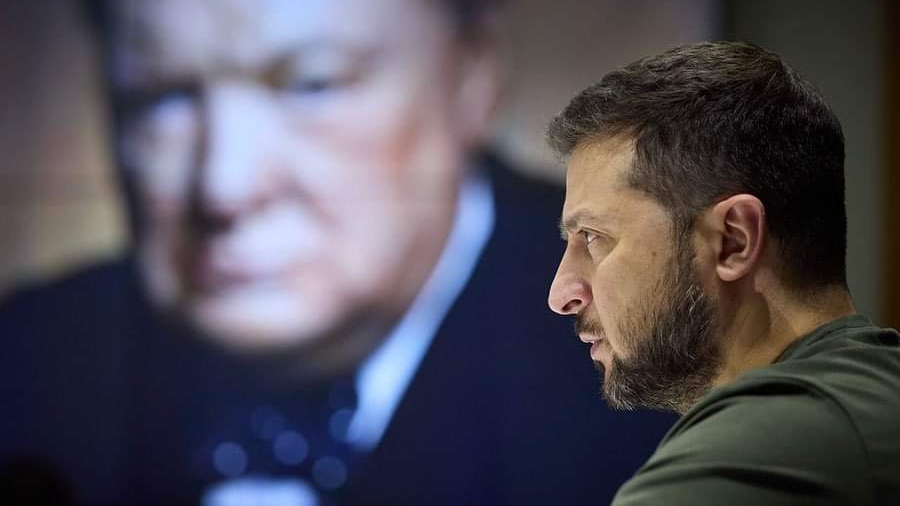 As recently as November, Volodymyr Zelenskyy was largely unknown outside his homeland and largely unpopular within it. Fewer than 10% of Ukrainians felt he was doing a good job.

The press was filled with charges of amateurism by the head of state and his government. The details of an offshore tax avoidance scheme had recently been published; critics noted a general lack of focus on policy issues; a sluggish economic reform program and perhaps most importantly a lackluster effort against the widespread and longstanding endemic corruption that was supposedly the raison d’etre for his meteoric rise to political prominence.

Conversely, he was often begrudgingly credited, even by political opponents, with being extremely articulate, PR savvy, and having slick press conferences where he attempted to explain away a lack of performance and success.

On the foreign relations front, he faced a continuous low intensity conflict in his eastern Donbas border region, which Russia had no interest in ending. This, while grinding away precious lives and precious resources, was the storm on the horizon. Operating under a threat of escalation and invasion looming from an increasingly adventurous Russia, this conflict spawned Russian-funded separatists within Ukraine and threatened to destroy the 30-year-old state. The conflict also divided both the European Union (EU) and  the NATO allies who held into a confusing array of inconsistent positions, some of which bordered on Chicken Little skittishness about Russia.

In the bloody months since the February 24 invasion, a besieged Ukraine, ably and courageously led by Zelenskyy has blunted a 240,000-man, four pronged armored offensive launched  from bases in Russia and  Belarus, overcome the  immobilizing effects of rasputstitsa, defended the heart of governmental Kyiv against a concentrated combined arms assault, eliminated whole squadrons of Russian aircraft, significantly reduced the maritime  threat on its southern coast by skillful employment of air and sea defense systems, all the while learning to fight an intensive multifront conflict, developing  tactical prowess and strategic capabilities using tactical maneuver, strategic movement, and  most recently, effective employment of long range precision fires to produce, at least temporarily, a blunting effect on enemy operational and maneuver capability.

Besides learning in short order to develop a sound national military strategy while simultaneously creating and fielding an effective logistical system capable of using existing (Soviet-era) weapons and supplies, the Ukrainian armed forces and the civil government has had to also integrate newer foreign systems (and training) into their operations with remarkable rapidity and devastating efficiency upon their adversaries.

Throughout, Zelenskyy has respected the democratic principles which brought him to power.  While Russia under Putin has carried out an ever more ferocious campaign of political repression, parliamentary processes in Ukraine have remained  undiminished, as  demonstrated as recently as last week when his Cabinet  was reshuffled. Security Minister Ivan Bakanov (a boyhood friend and former business partner) and Prosecutor General Iryna Veneditva were dismissed due to management deficiencies and security breaches within their ministries.

Ukraine has sunk the flagship of the Russian Black Sea Fleet and thereby held Russia’s fearsome amphibious forces at arm’s length; blunted a redeployment of four army corps to the northeast; is holding a line of defense that so far has prevented conquest by an enemy which outnumbers Ukraine three-to-one. Almost 900 Russian tanks are confirmed to have been destroyed or incapacitated, along with almost 4,000 other armored vehicles. Western militaries estimate that more than 20,000 Russian troops are dead and 60,000 wounded.

For a man who was expected by many, even  in his own country, to flee  for his life once the fighting began (and who was offered the assistance of elite Western troops to make it happen), Zelenskyy has demonstrated  remarkable leadership, laudable resilience, and extraordinary courage. So much for those early critics  who wondered if the problems in Ukraine were too serious to be addressed by a mere actor. And so much for those polls — Zelenskyy received 94% public support from Ukrainians in a May poll.

Make no mistake, President Zelenskyy is fighting for more than his country; he is defending Western democratic values and the lives of NATO citizens who would one day have had to confront Putin’s war machine.

Which begs these questions — How many of Europe’s current leaders would display the same fortitude if their countries were invaded? How many would buckle under the pressure? We can make educated guesses, but in truth, a leader’s real worth in war is never clear until the first invaders cross the frontier.

James Holmes Armstead is a retired professor of Strategy and International law from the US Naval War College. He is a former RAND analyst and Department of Defense team member who assisted in negotiating 13 new members states into NATO, and has taught international law, strategy, and national security policy for over 40 years both in the US and abroad.