Whatever the difficulties, peace must be maintained in Northern Ireland to avert a return to intercommunal violence. 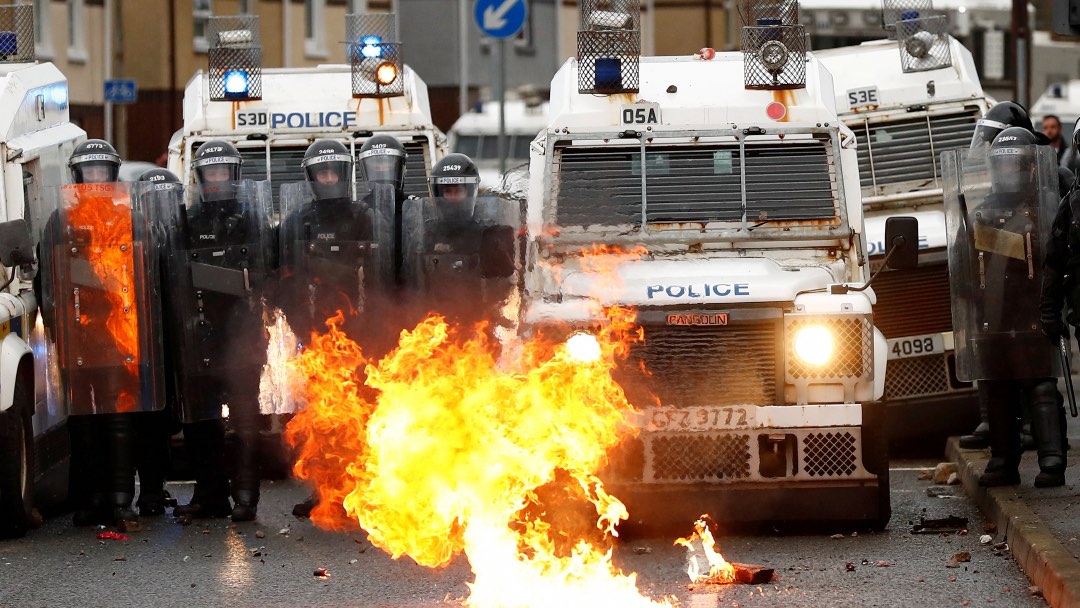 Photo: A fire burns in front of the police on the Springfield Road as protests continue in Belfast, Northern Ireland April 8, 2021. Credit: REUTERS/Jason Cairnduff TPX IMAGES OF THE DAY.

But establishing a goal and finding a way to achieve it are very different propositions. So far, there is a continuing disagreement between the EU and the UK over trading arrangements that concealed beneath them a potentially explosive issue — where are the borders between the trading bloc and its just-departed member state?

Before the withdrawal or Brexit, people and goods were free to move between the two countries under EU law. With the UK no longer part of the EU customs union or single market from January 2020, but with the Republic of Ireland remaining a member, the existence of an open border was in question. The issue was stark: should the EU’s border follow the UK’s national border — in which case the border posts symbolic of a violent past would have to be reinstated; or should Northern Ireland effectively remain inside the EU’s single market, in which case the border must run through the Irish Sea and so divide the United Kingdom?

It is an unhappy situation fraught with risk. How did this situation come about?

The Belfast (Good Friday) Agreement of 1998, brought an end to the years of violence in Northern Ireland (or Ulster.) The terms of the multi-party agreement, chaired by representatives of the United States, included the creation of a fully devolved Northern Ireland assembly founded on the principle of power-sharing between the Protestant and Catholic communities, as well as the establishment of institutions to promote dialogue. Most notably, the agreement called for a demilitarization of the inner-Ireland border that had long been linked with fortified British army posts, police stations, and watchtowers.

The United Kingdom’s departure from the European Union following the Brexit referendum of 2016 threatened to undo these carefully negotiated arrangements. The continuing squabbles between the EU and UK have already had an effect on the ground, with Protestant (loyalist) paramilitary groups withdrawing support from the Belfast Agreement and helping organize recent violent protests. Tensions are running high.

Leading experts see the resolution of the NI border situation as a “trilemma” or the pursuit of three inherently incompatible goals: first that there will be no hard border in Ireland, second that there should be no customs border between Northern Ireland and the mainland UK, and finally that the UK no longer participates in the EU customs union or single market.

The British government has attempted to negotiate a solution. The first was the Irish Backstop, championed by former Prime Minister Theresa May, which allowed Ulster to stay in the EU single market until an alternative agreement was reached. With Northern Ireland continuing to follow EU customs law, this would avoid a hard border and ensure continued peace. However, hardline Brexiteers within May’s own Conservative Party believed an unspecified future deal with the EU could trap the UK inside a customs union forever. As a result, a Brexit resolution that included the Irish Backstop was rejected by Westminster three times, which ultimately led to May’s resignation from office.

When Boris Johnson entered 10 Downing Street as a representative of the Brexit purists, his government produced a new idea; the Northern Ireland Protocol. This agreement legally withdrew Northern Ireland from the single market but ensured that there would be no new customs checks, tariffs, or restrictions on the Irish border. In effect, the protocol placed a de facto internal border along the Irish Sea as customs and immigration checkpoints would simply be relocated rather than removed.

But, as some had warned after the protocol was ratified and came into effect at the start of this year, Northern Ireland businesses faced significant disruption to supply chains with the UK and began to source goods from the Republic. This enraged unionists, with the new leader of the Democratic Unionist Party, Jeffrey Donaldson, arguing that the protocol was a breach of the Belfast Agreement as it divided the UK and warned of harmful political and economic consequences unless there were revisions. It was at this time that paramilitary groups withdrew support from the agreement.

There is already evidence that Brexit has had a disastrous effect on trade between the UK and the Republic of Ireland. In the first half of 2021, freight cargo has dropped by as much as 29% compared to the first half of 2019. These drastically shifting numbers are a direct result of Irish and some Northern Irish businesses seeking to avoid the customs and bureaucratic delays imposed by a post-Brexit economic environment. Meanwhile, faced with delays at the UK border, many Irish businesses are trading directly with Europe using new ferry routes from the island direct to Europe, bypassing the UK altogether, which will only validate the fear of those in Northern Ireland who believe Brexit is permanently weakening ties between the province and the mainland.

In recent weeks, Britain’s Brexit Secretary David Frost and Northern Ireland Secretary, Brandon Lewis, have stated that the protocol contradicts the Belfast Agreement and have pressed the EU to allow a renegotiation. EU Commission President Ursula von der Leyen has rejected this, although she has stated that Brussels will be “creative and flexible within the protocol of the framework.” Other Senior EU and Irish officials remain steadfast in upholding the agreement that was, after all, originally negotiated and ratified by the UK Parliament.

Boris Johnson has been presented with three options to solve this impasse regarding the NI trilemma.

Whichever of the three options Johnson chooses he will face opposition regardless of diplomatic messaging and political maneuvering. What he and his government should prioritize is the prevention of violence and the preservation of the foundation of peace built by the Belfast Agreement. The stability and security of the region hang in the balance and it is up to Johnson and the British government to ensure that it is maintained and protected in the years to come.