Ukrainians face a bleak experience at the hands of Russian invaders, but the Kremlin is deluded to imagine it can subdue a country of this size. 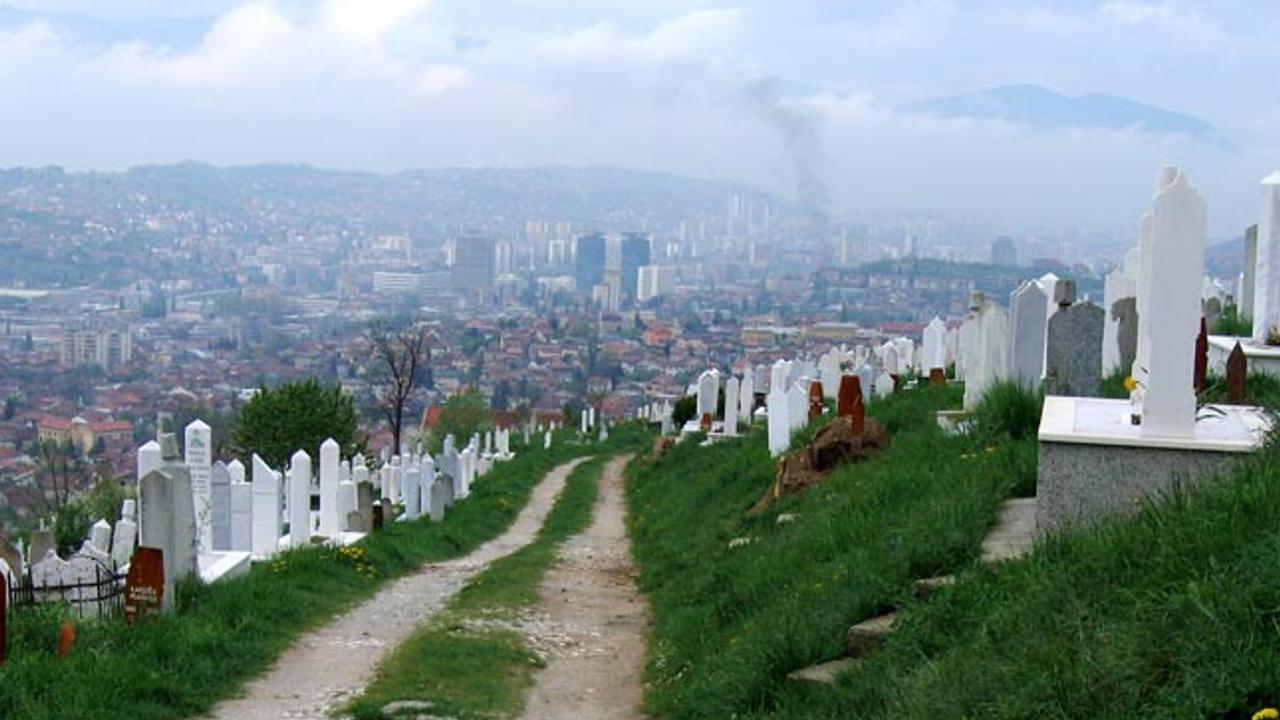 Photo: White graves of the cemetery on the hill above the Sarajevo commemorating the lives lost during the Bosnian War. Credit: sinor favela / fotos voladoras via Flikr.

It took a trip to Sarajevo this week, the epicenter of Europe’s last bloody war, to bring home what the Ukrainians are up against in the battle to hold their besieged cities.

I first drove into the Bosnian capital, alone and at 80mph, shortly after that conflict started in 1992, as the sound of shelling and machine-gun fire echoed off the hills.

I was young and naïve but yearning to understand how war — something I only knew from history books and the family dinner table — could break out on European soil.

Back then Serbs were in the hills and had the city surrounded. Each day they poured artillery and sniper fire into the metropolis below where residents sprinted, jogged, and ducked behind buildings in what became known as the Sarajevo shuffle.

At the beginning of the war, the Serbs had a huge advantage in firepower. But they lacked the numbers, and perhaps the stomach, to try and take the Bosnian capital in street-to-street fighting.

Instead, they sat back and used artillery and mortars. Snipers took to high buildings near the city center and gunned down men, women, and children. “Some snipers wanted to hit a child, they felt that it showed off their skill as marksmen,” a Bosnian Serb confided to me this week (with disgust.)

The Serbs probably believed as the Russians do today, that the residents would soon become desperate and surrender.

Three and a half years later, the besiegers finally gave up. Slobodan Milosevic, the Serbian strongman, signed a peace deal with his Croat and Muslim counterparts, and the war ended.

There are crucial differences, however, for Ukrainian cities trying to hold out today.

For one there is not the threat of NATO airstrikes hanging over the Russians, something the Serbs had to factor in, at least during the last several months of the siege of Sarajevo.

More significantly the Russians have much bigger guns, many more rockets, and superiority in the air.

The Yugoslav National Army — and the Bosnian Serb Army that inherited some of its military hardware — essentially used the same Soviet tactics as the Russians did in Berlin in 1945 and Grozny in 2000. But there was a marked difference in scale.

I heard once — and find it impossible to verify now — that the Russians dropped more ordnance on Grozny, the capital of rebellious Chechnya, in one day than the Bosnian Serbs did on Sarajevo during the entire siege.

I visited Grozny several times between 2002 and 2004 and it seemed plausible.

The only thing I ever saw with my own eyes that even came close to Grozny in terms of devastation was Vukovar, a small riverside town in Croatia flattened by Serbian guns in 1991, and east Mostar, pulverized by the Croats during a cross-town war with the Muslims in 1993.

Destruction is at the heart of the Russian military doctrine, and that now bodes ill for those defending their homes in Ukraine.

Many Ukrainians have been buoyed by the sight of their young men signing up to fight the Russians street-by-street using Kalashnikov assault rifles and Molotov cocktails. Those volunteers may struggle to get near enough a Russian tank or soldier to even use their weapons, although the better-trained elements of the Ukrainian armed forces are reportedly making good use of their Western-supplied guided weapons and an additional 17,000 anti-tank weapons have been sent in recent days.

After the initial realization that their forces were not going to be greeted with flowers — something, the Kremlin seemed to have talked itself into believing — the Russian army is trying to pound cities into submission with rockets, bombs, and artillery.

Cold and hunger will be their allies as power and water are cut off and food and medicines run short.

This tactic worked in Aleppo in northern Syria. And it also worked in Grozny against the Chechen rebels, some of the most battle-hardened guerrilla fighters in the world.

Most invading armies — especially when they want to hold and govern terrain and not just eviscerate their enemies — cannot afford such tactics.

In Afghanistan, the Americans and their allies committed themselves to a counter-insurgency doctrine which meant that they had to go eyeball-to-eyeball with the Taliban to avoid inflicting civilian casualties. And even then many innocents died.

By keeping the infantry back and using rockets and bombs, the Kremlin will also be looking to lessen the psychological toll on its own soldiers.

Putin has been telling the Russians for months that the Ukrainians are their brothers. Killing them in their thousands will be more palatable for the perpetrators if it can be done at a distance.

For the residents of Sarajevo, the siege was devastating and more than 10,000 died, the vast majority of them Muslims. But it was possible to survive in the scarred city.

Unfortunately for those hunkered down in Ukraine’s urban centers the intensity of the Russian attack may not be survivable. Putin sees weakness as a fatal flaw in a Russian leader and it is hard to imagine he will simply give up and go home.

Negotiations are not completely out-of-the-question and if a Russian Spetsnaz team manages to find and kill President Volodymyr Zelensky Ukraine may yet sue for peace.

If not, and the Russians continue to face stiff resistance they could even decide to go nuclear. In their armory are short-range tactical nuclear weapons that would devastate infrastructure and buildings.

Either way, the acrimony and hatred that the Russian tactics have already engendered will probably sow the seeds of their own eventual defeat.

Putin may have crushed Chechnya, a republic of one million people, with such methods, but holding down a 45-million strong European country is a challenge of a different magnitude.

Furthermore, if most Ukrainians were once moderately pro-Russian, the majority now hate Putin and Moscow.

Ironically the most successful tactic of recent times against a large invading army has been to not put up any resistance at all.

The Afghans, who have this down to a fine art, welcome the invader in and then persuade them to hand over aid and financial support.

It is only after the initial weeks and months when the occupier has exposed his soft underbelly that the sniping, roadside bombs, and ambushes begin to pick up the pace and the invader begins to slowly bleed. It took the Afghans 10 years to oust the Soviets and 20 the Americans, but they prevailed.

It may not be the European way of fighting a war but it worked against the world’s two most powerful armies.

Unfortunately, the fighting in Ukraine and the horrible humanitarian toll it is causing look set to worsen in the short term. Even so, beyond that, it is difficult to see how Putin, soon to be a septuagenarian, can emerge victorious.

We just have to hope that it doesn’t take three-and-a-half years for him to realize that. And that — facing such a defeat — he does not decide to sew even greater devastation both in Ukraine and beyond.

Julius Strauss is a former foreign correspondent for the Daily Telegraph who writes and reports on Russia, Ukraine, Afghanistan, and the Balkans in his newsletter Back to the Front.