The origins of today’s catastrophe lie in the Western mindscape. 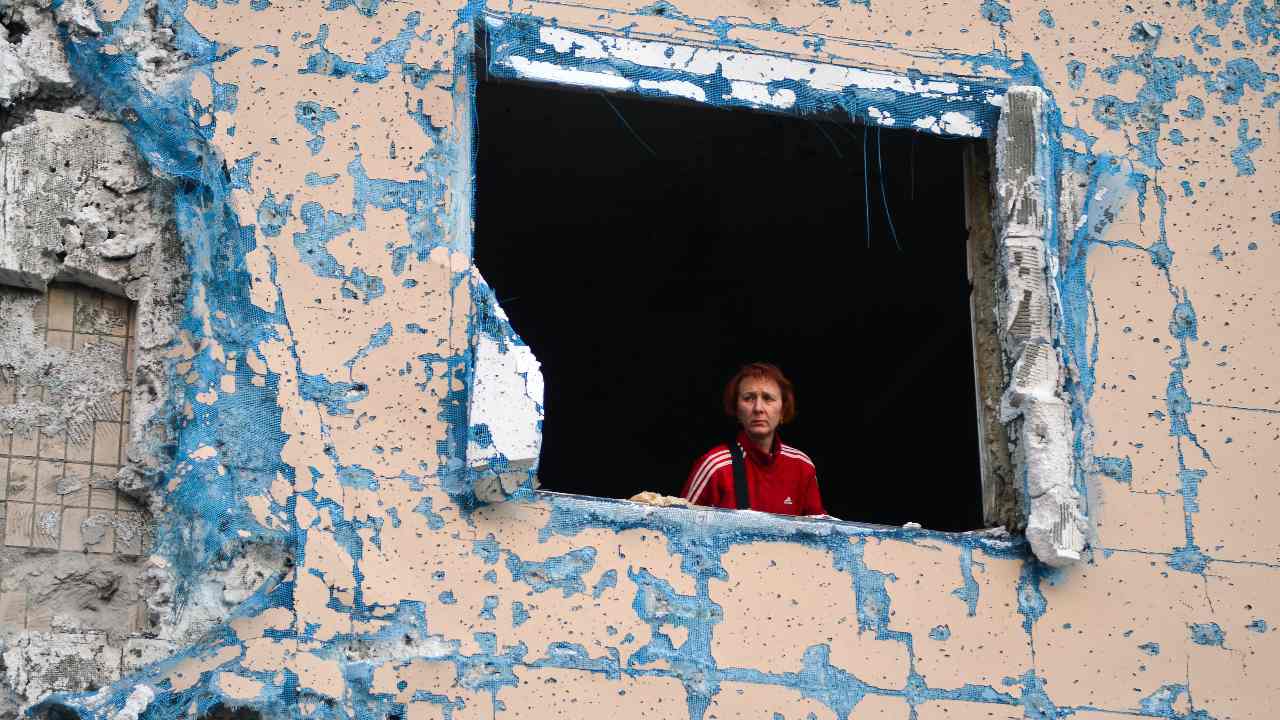 Photo: A woman stands in a smashed window inside a residential building damaged as a result of shelling by Russian troops in Sviatoshynskyi district, Kyiv, capital of Ukraine. Credit: Oleksandra Butova/Ukrinform/NurPhoto.

The immediate blame for the catastrophe engulfing Ukraine lies with the criminal regime in the Kremlin, and its deluded and vengeful leader, Vladimir Putin. But the deeper responsibility lies with countries that are many times bigger, richer, and more powerful than Russia. They could have constrained and deterred it. They failed to do so. If Western leaders had grasped Russia’s designs on its neighbors, tens of millions of Ukrainians would right now be continuing the free, safe, happy lives they enjoyed before February 24th.

This lethal obliviousness is a puzzle. Decision-makers in Berlin, Brussels, London, Paris, and Washington DC are not stupid. They have access to the best information in the world. Yet in plain sight, Russia for decades pursued intolerable aims by means of murderous crimes coupled with outrageous lies. Why did Western leaders ignore this?

Chiefly because they were ignorant. “Eastern Europe” never quite registered on the mental maps of these Western politicians and officials. They had not been on holiday there. They had no friends from these places. They had rarely read the literature. Scientific genius was appropriated by other countries (Marie Curie lost the second half of her surname, Skłodowska, and counted as French, not Polish). Only among classical music buffs did the captive nations form even a bridgehead in Western minds, thanks to composers such as Fryderyk Chopin, Béla Bartók, Leoš Janáček, and Arvo Pärt. The huge, even suffocating, influence of Russia, a cultural superpower, helped make smaller countries in-between seem, literally, marginal.

This mental desert is a product of the past 100 years. It started with Stalin’s isolationist policies in the interwar period and was entrenched by the Iron Curtain. In earlier centuries it would have seemed as bizarre as north European ignorance of the continent’s southern half, or vice versa. But for the post-war generations in western Europe, “Eastern Europe” was — literally — a gray area: backward and remote.

This was an unpleasant shock for the people who emerged from their decades of torture-kidnap after 1989. Their family and neighbors in the free world had largely forgotten them. Many viewed their reappearance as a costly and potentially risky nuisance. The strange relatives, with their bad teeth, odd clothes, heavy accents, and old-fashioned mores, were expected to be quiet and grateful, not to express vigorous, well-informed views about the continent’s future security. Only Czechoslovakia’s Václav Havel, with his extraordinary literary gifts and philosophical insights, briefly punctured the cloud of unknowing.

Russia, by contrast, was pampered. Keeping a “pro-Western” leadership safely in the Kremlin was far more important than anything else.

Ignorance begets arrogance. People from the region who warned the West about, for example, the Kremlin’s use of ill-defined “Russian-speakers” as a geopolitical lever were patronized, belittled, or told to solve the problem by giving this mythical political category extra rights.

Arrogance begets complacency. When Russia started making mischief in Western countries they responded by dismissing the problem as a mere irritant.

Greed compounded the problem. As Mark Twain noted, it is hard to make a case to someone whose livelihood depends on them believing the opposite. The “Caviar Express” trundled through Western corridors of power, offering passengers juicy fees and luxurious sinecures. Murders, cyberattacks, energy blackmail, corruption, gangsterism, and most of all full-blown revanchism went largely unpunished, while wishful thinking drenched decision-making.

With Ukraine’s flag now a fashion accessory and President Volodymyr Zelensky reprising Havel’s brief stint in the spotlight as the moral leader of the free world, the West’s once-bare mental maps are vividly painted.

But chiefly in shades of bloody red. For the bill is due. And the innocents, not the ignoramuses, are paying.