Supping With the Kremlin Devil: the Red Cross Dilemma

Attacks on the ICRC have come thick and fast over its involvement in Ukraine. But there are few other options. 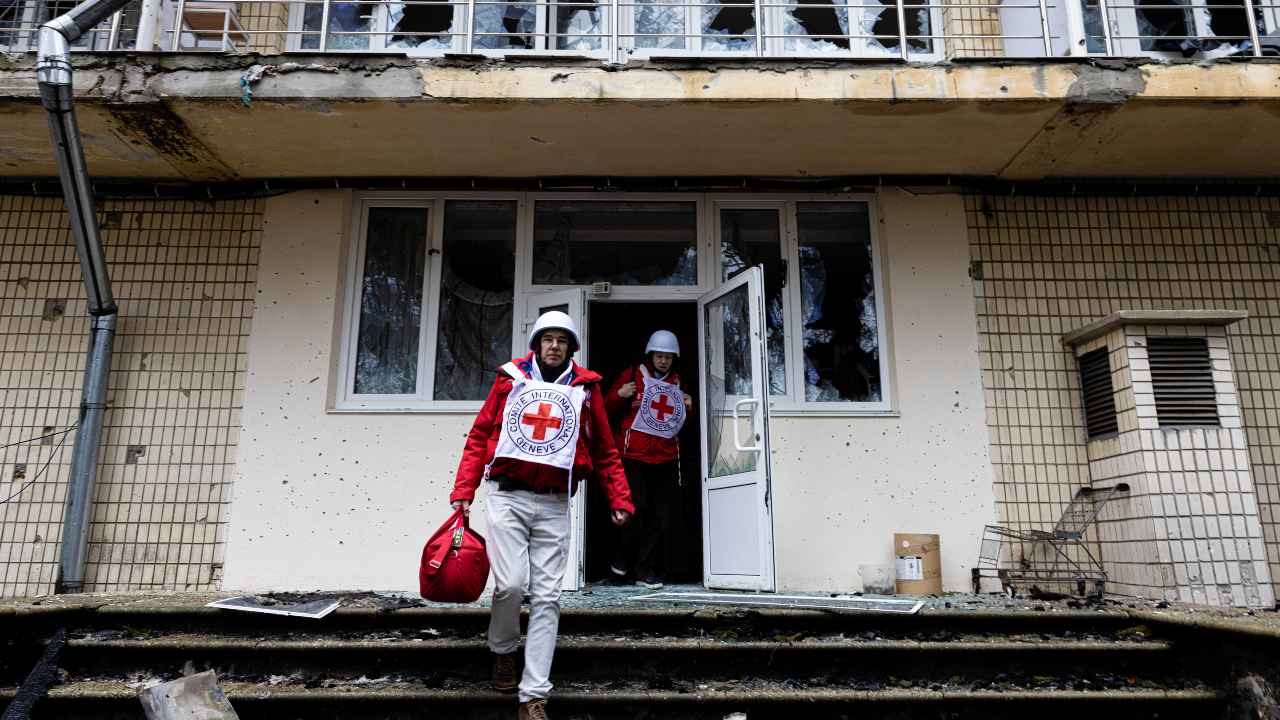 As Russia’s onslaught on Ukraine escalated last month, the President of the International Committee of the Red Cross (ICRC), Peter Maurer, visited Moscow. During two days of talks, Maurer met, amongst others, Sergey Lavrov, Putin’s lugubrious Minister of Foreign Affairs.

Amid a war of unprovoked aggression against a peaceful neighbor, the images that emerged were enough to set teeth grinding in Kyiv. A picture has always been worth 1,000 words, but in the social media age, it is more widely shared. Ukrainians were furious to see the head of a globally recognized humanitarian organization shaking hands and exchanging pleasantries with Lavrov, a man at the center of the Kremlin’s spiderweb, which has dealt enormous and indiscriminate destruction and civilian harm worldwide.

The talks focused on the war, though they also touched on the humanitarian situation in Syria, part of a long-running bilateral dialogue between the ICRC and Kremlin officials. Maurer and his staff emphasized Russia’s obligations under international humanitarian law, advocating for the protection of civilians and civilian infrastructure, safe passage, the rights of prisoners of war, and the scaling up of ICRC operations in the region.

A proposal for the to Red Cross open an office in Rostov, the Russian city close to the Donbas, was also part of the talks. This may have seemed an obvious idea to the Geneva-based charity, but to many Ukrainians, including government officials, it fed the idea that the ICRC was offering to help “filter” more than 400,000 of their compatriots who have been taken to Russia from the warzone. Most see this as a Russian mass kidnap, in the grim traditions of the NKVD and KGB.

Ukraine’s parliamentary vice speaker Olena Kondratiuk, appealed to the ICRC not to open the Rostov office, pointing out that the group’s funding came from individuals seeking to help Ukraine, not Russia. The chairman of the Ukrainian parliament’s Public Health Committee, Mykhailo Radutskyi, also denounced the move, arguing it would facilitate Russian aggression.

In a statement to Ukraine’s parliament, Radutskyi – mirroring accusations shared online – said that any such ICRC center would “legitimize” and support Russia’s “abduction and forced evacuation of Ukrainians.”

The online reaction was much harsher. One post, shared thousands of times, merged the famous Red Cross symbol with a swastika. “Look closer”, it says, “This cross isn’t saving lives.”

Articles and social media posts rained down; in Ukrainian, Russian, and English, they ranged from accusations that the ICRC favored Russia, to calls for boycotts and withdrawal of the voluntary contributions which fund the Geneva-based organization.

The Red Cross, perhaps taken aback by the vehemence of the response, raced to issue statements and get Maurer on air with big media organizations. A statement on March 29 complained that its work was being misrepresented, its frontline staff put at risk, and that this made its work of saving civilians more difficult.

“The ICRC does not want to open an office in southern Russia to ‘filter’ Ukrainians, as many reports are alleging. We are not opening a refugee camp or any other type of camp,” it said. “The ICRC is discussing opening an office in Rostov in southern Russia [as] part of a huge regional scale-up to deal with a massive humanitarian crisis and meet the needs of people wherever they are.”

Robert Mardini, ICRC Director General, told the BBC that the organization is the guardian of the Geneva Conventions and that it would only ever take the side of civilians, the wounded, and prisoners of war (POWs). In particular, the organization has been negotiating — fruitlessly so far — to persuade the Kremlin to agree a ceasefire and evacuation of some 150,000 starving civilians in the wrecked remains of Mariupol.

The ICRC is not a human rights organization, in the modern sense of the term, and is not “some dial-a-quote organization” for journalists, as an official said at the time of the 2004 Abu Ghraib prison scandal in Iraq. It works behind the scenes with any relevant authority, including the Nazi regime during World War II. Its press releases are notoriously light on detail, and deliberately so.

Henry Dunant, founder of the Red Cross and considered by many to be the father of modern humanitarianism, established the organization after he witnessed the aftermath of the 1859 Battle of Solferino, where Emperor Napoleon III’s Franco-Sardinian troops engaged the Austrian army. Casualties ran into the multiple thousands, and the young Swiss banker was struck by the care of local women who, in the midst of all that carnage, did their best to aid the wounded and dying. In the overwhelmed and makeshift hospital, all men were treated equally, regardless of nationality.

In Bosnia, where the Red Cross remains active to this day, ICRC staff negotiated a complex political landscape to deliver aid to civilians on both sides of the conflict. Between 1992 and 1995, the ICRC visited 54,000 detainees, exchanged 18 million messages, reunited over 4,500 families, and distributed over 100,000 tons of food. Today, it makes similar efforts in conflicts across the world, including Syria, Afghanistan, the Democratic Republic of the Congo, South Sudan, and many others.

The Red Cross, as it is known to most, has some fine work to its credit and has saved numerous lives. But the organization is far from unblemished. Neutrality in the name of humanitarianism is a difficult and imperfect practice. Most notably, during World War II, it entirely failed to condemn or respond to the Holocaust and the systematic extermination of Europe’s Jews and other persecuted minorities — the ICRC’s 1944 Theresienstadt camp visit, a grotesque fraud perpetuated by the Nazis to conceal their mass murder, stands out. The ICRC describes this as its greatest failure.

But this does not prove that Maurer’s handshake with Lavrov was anything more than the price the ICRC pays to have some influence on Russia’s prosecution of its war. Peter Maurer, I would imagine, was not thrilled at the prospect of a photo opportunity with Lavrov. Even before he became ICRC President in 2012, Maurer was heavily engaged in humanitarian work as a Swiss diplomat; he knows better than most the devastation wrought by Russia’s innumerable crimes in Syria.

So he will have had no doubt that his trip to Moscow would mean shaking hands with Lavrov, someone complicit in some of the most sustained and egregious attacks on civilians and civilian infrastructure in modern history. But that is the nature of the ICRC’s role in humanitarian diplomacy. Prior to his trip to Moscow, Maurer had spent five days in Ukraine collecting details of what is happening on the ground.

The alternative — a refusal to deal with the devil — would mean that the organization loses its seat at the top table. It would be unable to advocate for better protection of civilians and POWs, or to continue lifesaving work on the ground.

The impact on Ukrainian civilians trapped by the fighting would be real and immediate; they would lose any hope of access to food, water, medications, and heating fuel. No one would be available to bear witness to their suffering; a bleak future would become even darker.

Over 150 additional ICRC staff have been sent to the region, including surgical teams, psychologists, weapons contamination experts, engineers, and logisticians. Whether it is welcoming the millions of refugees fleeing westward, or supplying aid within Ukraine itself, Red Cross staff — many of them Ukrainian — have worked to alleviate suffering.

As I write this, the ICRC continues to work to send convoys towards Mariupol in a thus-far vain effort to deliver humanitarian aid and evacuate civilians. In May 1992, a similar convoy – attempting to deliver emergency medical aid to civilians besieged within Sarajevo – was deliberately targeted. Three ICRC staff were wounded, and Frederic Maurice, a father of two, later died of his wounds. Scores of Syrian Red Crescent staff have been killed during the civil war there, including its secretary general. These are the risks that ICRC’s operational staff take.

Regardless of the anger aimed at the organization, it will continue to be at the heart of the humanitarian response in Ukraine. Calls for a halt to the voluntary donations that are its lifeblood will only hinder the ICRC’s ability to render aid to the innocent victims of Putin’s war.

It has been reported that the ICRC response in Ukraine has been slow and chaotic at times. Ukrainian officials, perhaps justifiably, have accused the organization, and other groups, of being unprepared. And its anticipation of how social media will interpret public appearances by its officials may have been poor.

Negotiating the diplomatic terrain in Ukraine is complex and littered with sensitivities. The only certainty is that any organization talking to the Kremlin will find the process even more difficult, as further Russian war crimes emerge and anger deepens at the evidence of widespread brutality.

Aaron Clements-Hunt is a freelance researcher and writer with a focus on mass violence against civilians in contemporary conflict. Based in Amsterdam, he has an MA in Holocaust & Genocide Studies. His previous research has focused on siege warfare during the Syrian conflict.