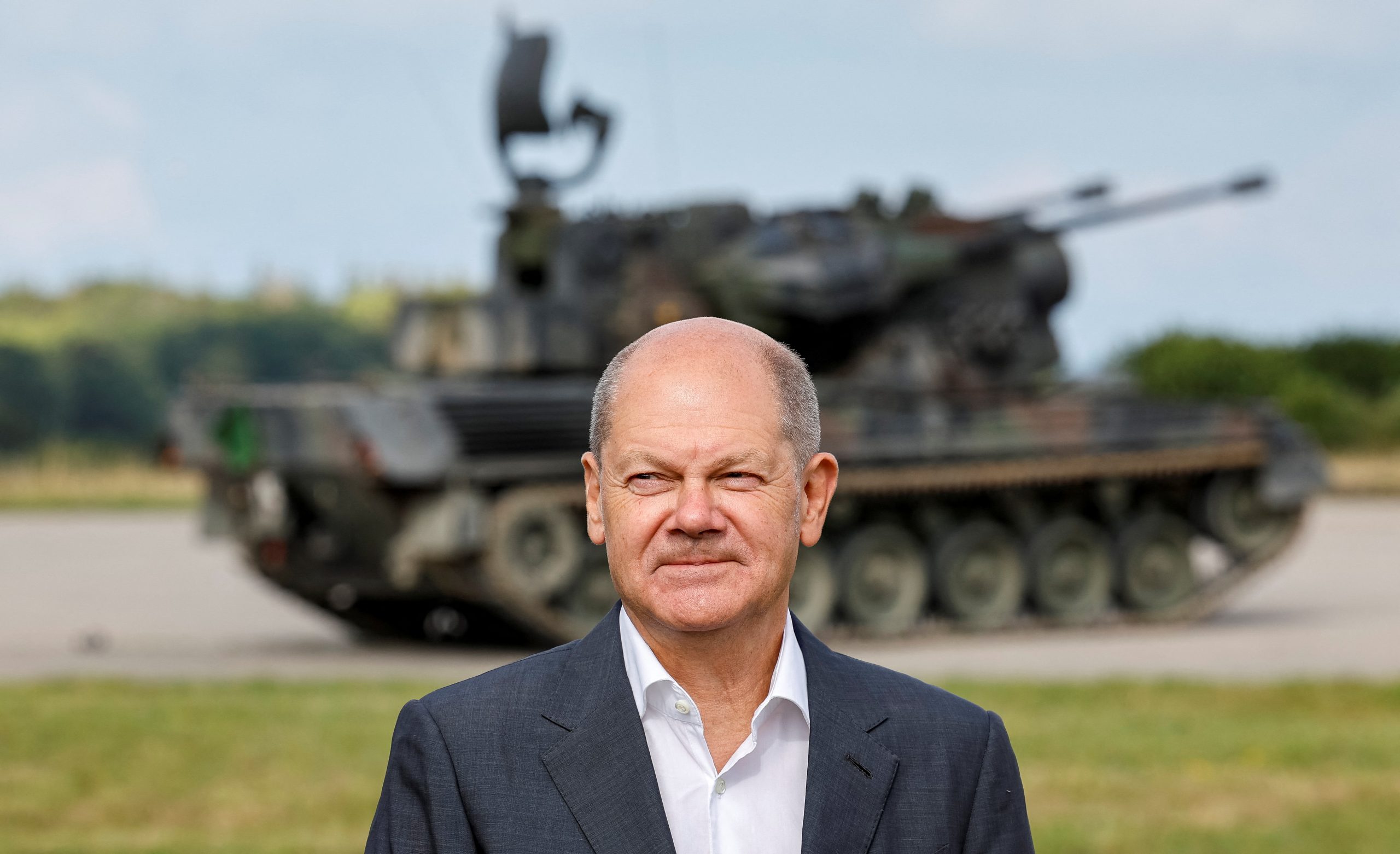 Photo: German Chancellor Olaf Scholz stands in front of a German self-propelled anti-aircraft gun Flakpanzer Gepard during a visit of the training program for Ukrainian soldiers on the Gepard anti-aircraft tank in Putlos near Oldenburg, Germany August 25, 2022. Credit: Axel Heimken/Pool via REUTERS

Start with greed dressed in humbug. Then promise to change, but fail to follow through.

This is Germany’s eastern policy since 1991. For three decades, governments in Bonn and then Berlin guzzled cheap Russian energy, pooh-poohing other countries’ worries about Kremlin imperialism. They dressed up this policy in sanctimonious language about dialog and negotiation.

This was lucrative in the short term (in the case of Gerhard Schröder, it fuelled a flourishing post-retirement career). But it failed. Vladimir Putin’s regime broke every agreement that the Germans brokered. After Russia’s latest onslaught on Ukraine, Chancellor Olaf Scholz announced a Zeitenwende [historical turning point], featuring a promised €100 billion increase in defense spending.

But since then, Scholz’s policy has been indecisive, ill-formulated, and poorly communicated, most recently with his refusal to allow allies to send German-made Leopard battle tanks to Ukraine.

The German chancellor has, by my count, six possible reasons for this. First, fear of escalation. Second, guilt about Germany’s wartime record. Third, a desire for a better post-war relationship with Russia. Fourth, a desire to distance Germany from a declining, distracted United States. Fifth, worries about public opinion. Sixth, personal stubbornness.

These are not mutually exclusive. But none stands up to scrutiny. For a start, the answer to fears of escalation is better deterrence, not greater weakness. Secondly, Nazi crimes deserve to be remembered properly, particularly by Germans. Ukraine was a direct victim of one of them: the 1939 Molotov-Ribbentrop Pact. And after Hitler attacked Stalin in 1941, Ukraine’s entire territory was devastated by fighting (unlike Russia’s). Third, appeasing the Putin regime is unlikely to bring dividends when the fighting stops, if you have also incensed your most important allies. Fourth, anti-Americanism is not a sensible policy for Germany, given its endemic military weakness. Fifth, German public opinion narrowly supports sending tanks to Ukraine (and in any case, leaders are paid to lead, not take instructions from opinion pollsters).

That leaves stubbornness. If Scholz had a plausible alternative policy, backing it with relentless determination would be defensible, even praiseworthy. But he doesn’t. Germany’s approach to Ukraine is simple: promise, prevaricate, and then perform. The history of the past 11 months suggests that the tanks will be shipped in weeks, if not days. But that will be too late for Germany to take any of the credit. It will also be too late for the Ukrainians that will be maimed and killed in the meantime.

The most important issues in foreign policy in Germany are a Chefsache — the boss’s business. Government ministers are sidelined by the Federal Chancellery. Decision-making there is haphazard. Germany lacks a National Security Council to thrash out strategic priorities. Results of this personalized, underpowered approach include the disastrous Nord Stream gas pipelines and a softly-softly approach to Russian espionage.

Scholz’s own lack of foreign policy experience aggravates this weakness. So too does his taciturn approach. Whatever his reasoning may be for delaying permission for other countries to send their tanks, he chooses not to share it.

The result is a bonfire of Germany’s credibility. Politicians such as the hawkish Green Party foreign minister, Annalena Baerbock, are personally admirable. “But in the end, she’s just running a think tank,” says a decision-maker in one of Germany’s eastern neighbors, despairingly. Germany spent decades after 1945 trying to persuade victims of Nazi aggression that it was now a peaceful and friendly country. That worked in large measure, with historical reconciliation with France, the Netherlands, Poland, and others. This trust, crucially, created the conditions in which Germany could reunify.

It is now being squandered. Germany’s eastern neighbors no longer fear its militarism. They fear its unreliability.