Sanctions and Solidarity — the Left Must Stand With Ukraine

Russia’s war on Ukraine is likely to be a long-lasting conflict. The Western left should drop narratives that risk fragmenting Western resolve. 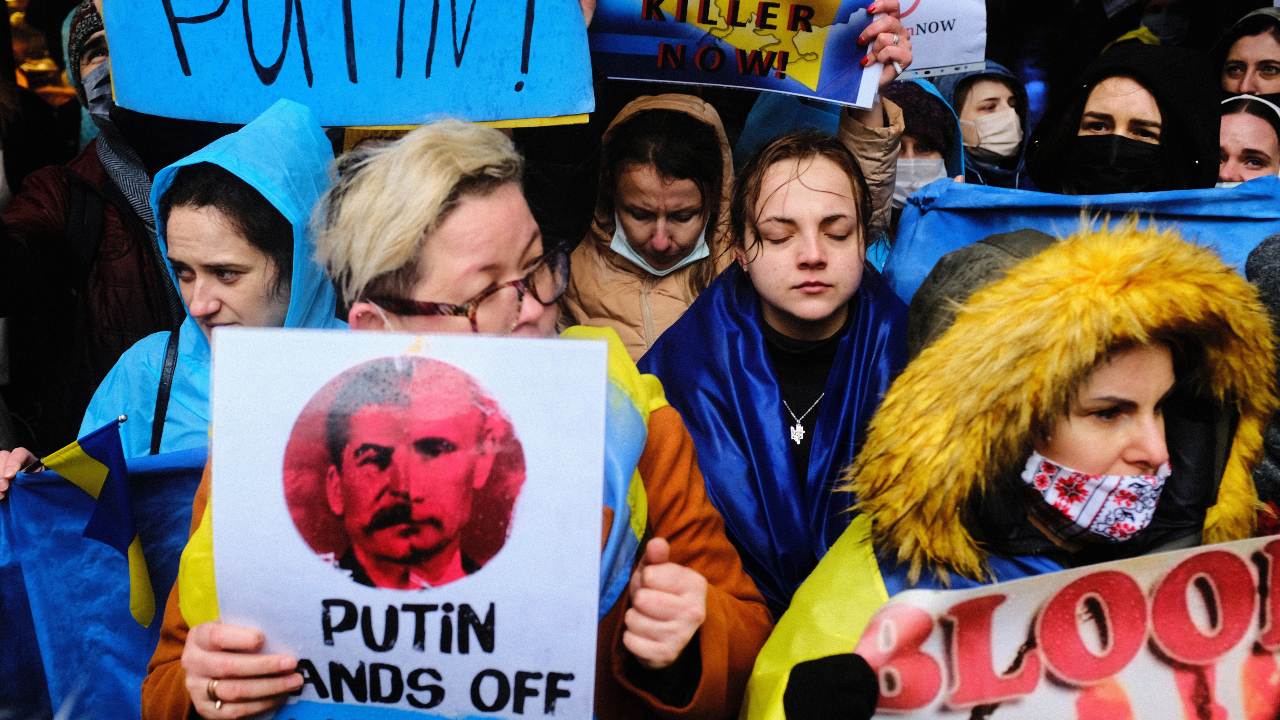 Russian forces are now attacking more than a dozen Ukrainian cities with blitzkrieg maneuvers. Casualties are ramping up as civilian structures are being bombarded without discrimination. The Rubicon from hybrid to conventional warfare has been crossed and is now taking place just 60 km from Poland’s – and thus NATO’s – borders.

In response, President Joe Biden announced sanctions, as has the European Union. Germany halted the implementation of the Nord Stream 2 pipeline. There is commendable solidarity in this first response. As air, naval, and land forces escalate the war, as forecast by the NATO Secretary General Jens Stoltenberg, the response will have to grow proportionately.

But there are already signals of reticence in non-military responses. This morning, the US and EU expressed hesitance to pull the plug on the Russian access to  SWIFT — the global payments system. In part, this is over concerns of harming exposed Western creditors to Russia.

At the same time, the EU is promising the “strongest package of sanctions”, including blocking Russian bank access to European financial markets. Yet, Russia is still supplying Germany’s gas supply through Nord Stream 1.

Despite the talk of Putin’s irrationality, this reticence is priced into his strategy. He tested the extent of Western retaliation in the first Ukrainian invasion in 2014, calculating the steady and incremental climb in sanctions and other punitive responses. For every strategic sector where the West is planning sanctions, Putin will have developed mitigating measures. Russia’s biggest sanctioned export – wheat, for example, has just been cleared for import into China.

It is naïve to think that Russia is not prepared to extend the Ukrainian incursion into a long war of geopolitical attrition. After all, this invasion is an evolution in a long series of destabilization campaigns. Russian military and financial support for Transnistrian separatists has propped up pro-Russian forces in northern Moldova for years. Russia’s invasion of Georgia in 2008 ensured the continuation of frozen conflict in South Ossetia and Abkhazia. Russian military support to Karabakh Armenians led to the most recent conflict in Nagorno-Karabakh. Abrupt ceasefires, withdrawals, and re-entries under various pretenses will be par for the course in this conflict.

The West needs to prepare for war to be drawn out into a possibly lengthy conflict. During this process, be it months or years, Putin will aim to test the patience of Western leaders – and their willingness to exchange their voters’ financial comfort for solidarity with the Ukrainian cause. The West will be increasingly tested with refugee flows, cyber-attacks, and disinformation, as well as increasingly uncomfortable discussions with Russian-aligned countries like China or (even) India. The Kremlin is betting that the allure of softening stances on Russia will eventually affirm the legitimacy of their actions.

Meanwhile, it is time to abandon the idea of a Russian “sphere of influence” alongside the prevalent “post-Soviet” nomenclature. As the bombs began to fall in Ukraine, Jacobin published a piece concluding that while Putin should bear the lion share of the blame, one ought to be reminded of the “Western governments and officials who chose to make war inevitable by refusing to compromise.” And while Bernie Sanders criticized Russia, he made a whatabout reference to the Monroe doctrine. Some on the left have accepted the argument that attributes Russian aggression to NATO expansion, ignoring the agency of states that solicit membership. Almost every country of Central and Eastern Europe held elections where the slogan of a “return to Europe” was endorsed by their voters in the 1990s and early-2000s. It is only because their accession efforts were acknowledged that they managed to avoid the tragic fate that has now befallen Ukraine.

To ensure that the American leftist movements maintain credibility with social democrats around the world, their loudest voices and institutions must insist on the independence of sovereign nations. This is not to say the left cannot be critical of NATO, continue to place American actions in the context of imperialism, or hold their government to account for their past war crimes. Yet without embracing a more complex worldview adapted to the fact that others besides the US have imperial ambitions as well, the new left risks repeating Cold War-era hypocrisies.

Without new narratives and terminology, Putin will keep exploiting the misconception that Russia has unique claims on countries occupied by its predecessor, driving more wedges between democratic solidarity.

Eriks Selga is a Non-Resident Fellow with the Digital Innovation Initiative and Transatlantic Leadership program at the Center for European Policy Analysis (CEPA) and is a risk analyst at the Latvian Financial Intelligence Unit, and is pursuing a PhD at the university of Hong Kong.

Jérémie Langlois is a Phd student at the University of Wisconsin-Madison where he studies civil-military relations and protest politics. He holds an M.A. from Georgetown University’s School of Foreign Service.