Russia and Ukraine are in the midst of a bloody physical and intellectual divorce; liberal intellectuals are the despondent victims 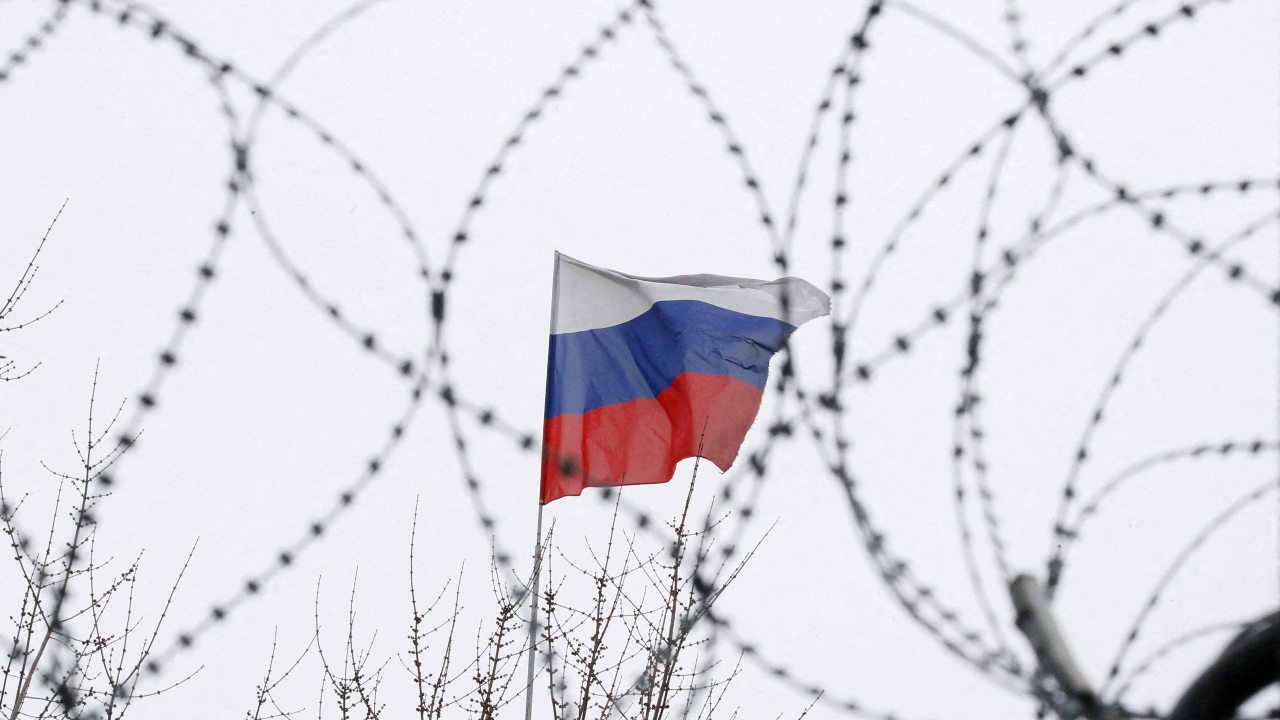 Photo: The Russian flag is seen through barbed wire as it flies on the roof of the Russian embassy in Kiev, Ukraine March 26, 2018. Credit: REUTERS/Gleb Garanich/File Photo

Russia’s build-up for a possible Russian new invasion of Ukraine is not something the Kremlin is preparing in deep secret: quite the contrary, most pro-Kremlin propagandists have been busy for months telling the domestic audience how easy it would be for the Russian forces to crush military resistance in Ukraine.

And yet, there is a striking difference between now and what we witnessed in Moscow in 2014-2015.

Seven years ago, Russian society was fully mobilized during and in the aftermath of the annexation of Crimea. The Kremlin successfully exploited and inflamed feelings of betrayal by the West and anger caused by the loss of the Soviet empire shared by the majority of the country. Liberal elements of society that rejected the annexation were equally mobilized.

In September 2014 in Moscow, tens of thousands of liberal-minded citizens went to the streets to take part in an anti-war march, social media was full of heated debates between the supporters of the annexation of Crimea and the liberal intelligentsia. Russian writers, journalists, and commentators talked incessantly about what they could do to express their support for Ukraine, and they made a huge effort to counter a Kremlin line that Maidan revolution was a fascist coup d’état.

Many of them knew of what they spoke: the Kremlin squeeze on free media led to the exodus of Russian liberal journalists to Kyiv in the late 2000s, and by 2014 there was a sizable community of Russian journalists either based in Kyiv, or which often traveled to the Ukrainian capital, and had close friends there. Russian liberal media, or what’s left of them, covered the Maidan revolution, bravely reported from Donbas, and investigated the Russian role in the destruction of flight MH-17.

In fact, the public outcry of Russian liberal society against the war was so palpable that the Kremlin and security services felt compelled to counterattack. The FSB launched a massive spy hunt, arresting people on charges of spying for Ukraine; and Russian internet censors blocked liberal websites and social media pages, both to kill open debate about Ukraine and to immobilize society. The Kremlin attack was not a complete success: for instance, Russian investigative journalists remain committed to writing about the activities of Russian mercenaries in Donbas, the situation in Crimea, and the investigation of the tragedy of MH17.

And yet seven years later, the picture is strikingly different. There is little talk about Ukraine among the Moscow intelligentsia nowadays. The liberals in Russian society still exist, and they are vibrant and very much alive, despite the unprecedented pressure they saw in 2020-2021. They are aghast of President Vladimir Putin’s warmongering, and they are very vocal in their condemnation of the Kremlin revanchism, but the situation in Ukraine itself is not the focus of their conversation.

Russian liberals remain engaged with events in neighboring countries. But these days, Russian intelligentsia feels more connected to the civil society in Belarus than in Ukraine. After all, the dictators in Minsk and Moscow seem now to be in lockstep in sharing and exchanging their experiences and practices in dealing with dissent.

It is very different with Ukraine. It seems that the direct connection between the civil society of Russia and Ukraine has loosened. Russian television still bombards its viewers with anti-Ukrainian propaganda, but it became so unbearable that smarter elements of society simply stopped watching television. In the meantime, many Russian liberal commentators and journalists either gave up writing about Ukraine or developed a habit of writing about it very cautiously, fearing they might be accused of insensitivity.

Because the list of things that could cause offense is growing by the day — the spellings used for Ukrainian place names, and even the use of prepositions. For instance, in Ukraine or on Ukraine makes a huge difference – the latter can be found offensive and chauvinistic by Ukrainians. History is of course another minefield, and ultimately, so too is the question of who has the moral right to discuss the situation in Ukraine, which is partly occupied by Russia and by pro-Russian forces.

During the past seven years, it has also become more difficult for Russian journalists to visit Ukraine – for obvious reasons. For instance, anyone who has been to Crimea will be refused entry to Ukraine. In 2017, Ukraine banned broadcasts by the Russian liberal online TV channel Dozhd. Ironically, TV Dozhd’s coverage of the war in Donbas repeatedly upset the Kremlin, and the channel was under constant attack from the Russian authorities thanks to its long-standing critical stance on the issue. In August 2021 the Dozhd was named a foreign agent by Russian censors, a designation that now indicates a downward and ultimately terminal trajectory.

It has also become very difficult and extremely dangerous for Ukrainian journalists to work in Russia. In 2016, Roman Sushchenko, a correspondent of Ukrinform news agency, was arrested in Moscow by the FSB secret police and accused of espionage — in 2018 he was sentenced to 12 years in prison. On January 3, Roman Tsymbalyuk, the last remaining Ukrainian journalist accredited in Russia, left the country because he felt his personal safety was at risk — the Russian prosecutor’s office had expressed an intent to interrogate him.

As a result, even the most advanced part of the Russian society knows very little about what is happening in Ukraine, in politics and more broadly. The increasing ignorance is true not only about politics but culture as well: it is difficult to have a proper discussion about Ukrainian literature in Moscow — the last book by Andrey Kurkov, the famous Ukrainian writer, was published in Russia back in 2007, even though Kurkov writes in Russian. It is even tougher to get to know other Ukrainian authors in Moscow, and the caution of Russian publishers seems to be understandable after the FSB raided the library of Ukrainian literature in Moscow in 2015, accusing the director of extremism (she was found guilty and sentenced to four years on probation.)

And in the meantime, Ukrainian publishers have got cold feet in publishing authors from Moscow — the publication of our book The Compatriots was canceled because the publisher became afraid that the authorities would deem the title pro-Kremlin.

Seven years ago, liberals in Moscow loved to say that Putin attacked Ukraine because Ukraine could set an example of liberal democracy too close to Russian borders, thus creating an alternative possible future for the country, something he couldn’t tolerate.

Nobody talks this way nowadays, either in Russia or Ukraine. Gone are the days when the intelligentsias in the two countries looked at each other for an example or inspiration. Probably they are gone forever.

Andrei Soldatov and Irina Borogan are nonresident senior fellows with the Center for European Policy Analysis. They are Russian investigative journalists, and co-founders of Agentura.ru, a watchdog of the Russian secret services’ activities.