The statelet was part of Vladimir Putin’s plan to expand Russia’s frontiers. That now seems a long way off. 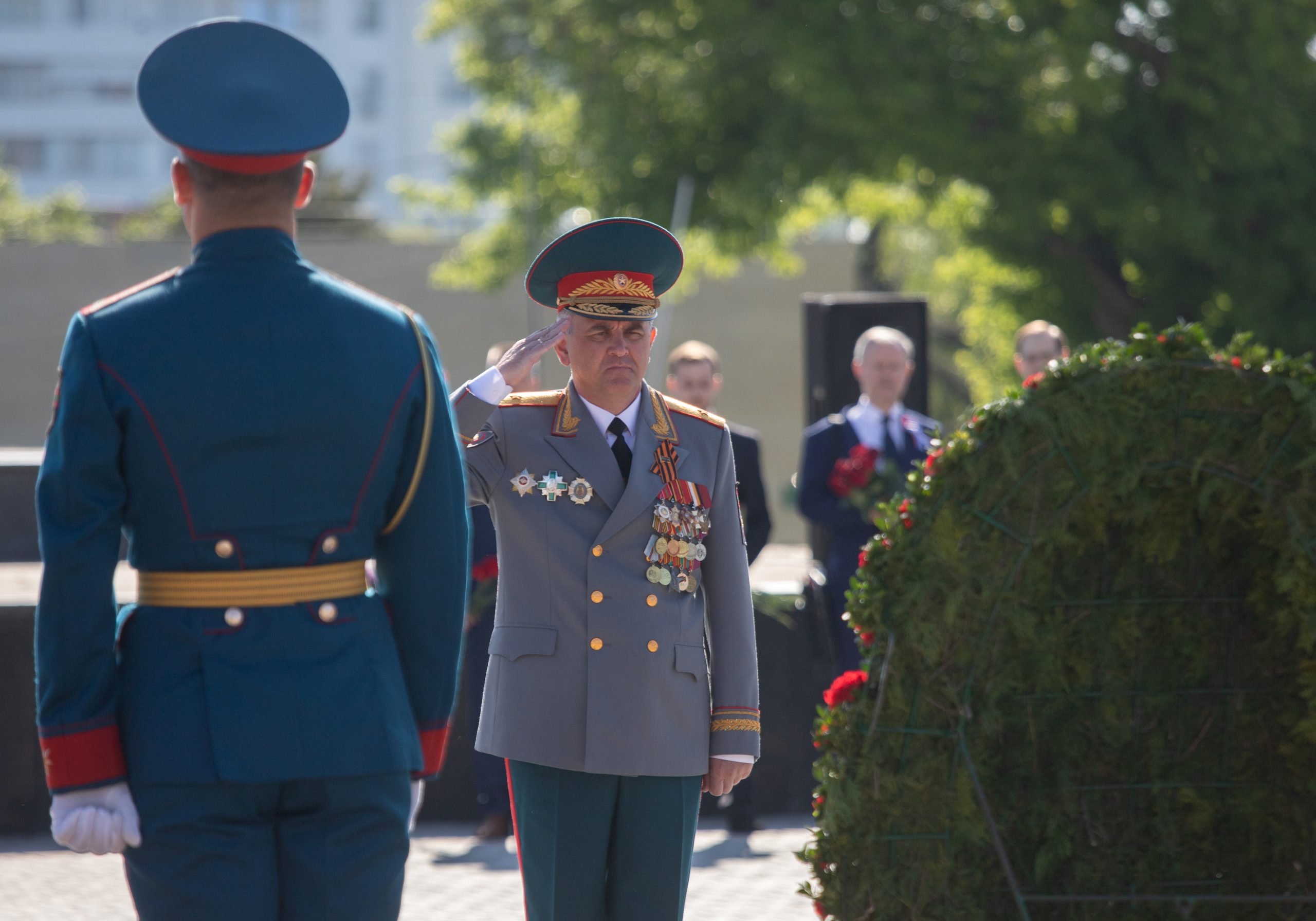 Photo: Head of Transdniestria Vadim Krasnoselsky takes part in a flag-rising ceremony on Victory Day, marking the 77th anniversary of the victory over Nazi Germany in World War Two, in Tiraspol, in Moldova's breakaway region of Transdniestria, May 9, 2022. Credit: REUTERS/Vladislav Bachev

During the opening phases of Russia’s most recent invasion of Ukraine, the irredentist dreams of Russian leadership ran wild.

Rustam Minnikhanov, former president of Tatarstan and a major general, called for “reunification” with Transnistria, the breakaway region of Moldova, echoing the prediction of Russia’s leading daily Komsomolskaya Pravda. The ambition follows the secessionists’ 2006 referendum on joining Russia, which, like more recent referendums in occupied Ukraine, yielded 99% support and no international recognition.

As recently as July, Transnistria’s so-called foreign minister (the territory is just 1,600 square miles and perhaps 350,000 people) asserted his government’s intention to follow through on Russian annexation. More tub-thumping followed from Russian generals and from Moscow. This, after all, was land that Russia had helped to seize in the 1990-92 war.

And yet, by September president Vadim Krasnoselsky pulled an about face, proposing instead to jump start long-stalled reconciliation talks with Moldova.

No doubt the abysmal performance of Russia’s armed forces made Transnistrians question the worth of the Kremlin’s “peacekeeping” troops — poorly equipped locals led by Russian officers but with no reliable geographical route to the “fatherland” — while a free trade agreement with Moldova proper has reoriented much of the economy away from Russia. The possibility of a more pro-Russian government in Moldova following recent protests, may also weigh.

And yet, at a deeper level, the national identity that Transnistria has crafted over three decades is incompatible with Putin’s vision of erasing the Ukrainian language, history, and culture.

Despite its popular portrayal as a land frozen in the Soviet era, Transnistria bears far more in common with the Russia of 2021 than of 1981. The Communist party is in systemic opposition, and its most recent leader was jailed. Orthodox symbols flank the many monuments to the war that severed the region from Moldova. While statues of Lenin still retain prominence in front of parliament and city hall, the largest monument in the statelet’s capital city of Tiraspol is of an imperial nobleman and general, Alexander Suvorov, whose profile graces the currency and after whom the military academy is named. Across from Suvorov’s statue is Catherine the Great Square, the region’s largest park.

Transnistria’s Putin-style melding of Tsarist heritage and Soviet rehabilitation is complemented by an economic and security system both similar to, and propped up by, the Kremlin. Assets once belonging to the state were carved up among ex-KGB men and party bosses. The biggest winners founded the Sherif Corporation, which now controls up to 60% of the economy. Outside cell service is blocked once entering the region, and media is tightly controlled, most of it beamed directly from Russia.

To whatever extent the people of Transnistria look to Russia as a model, such corruption and authoritarianism appear to be the natural order of things. For Russia, this view helps keep Transnistria as a bargaining chip against Moldova. Russia, therefore, sends officers to lead the local security services and pays their pensions, while providing subsidies for gas (which Russia then assigns as debt owed by Moldova) amounting to nearly half of GDP.

While this setup provided a state of equilibrium to keep the same elite in power for decades, Russia’s position as a model for Transnistria has floundered. Putin’s assertion that Ukrainian identity is a Western invention grates against a Transnistrian identity which gives Ukrainians pride of place.

Ethnic Ukrainians comprise a quarter of the population, with another quarter composed of Moldovans. Russians make up less than a third. Transnistrian authorities have long cultivated an image as a multiethnic state, contrasting their region favorably with increasingly monolingual Moldova, where Romanian is widely spoken and the Latin script used.

Transnistria eagerly accepted thousands of those fleeing from Ukraine. School-aged refugees can attend the main Ukrainian-language school, given pride of place next to the parliament building, and a block away from the main thoroughfare named for Ukrainian national hero Taras Shevchenko, whose face appears on the 50 ruble note.

There and throughout the region, refugees see signage in both Russian and Ukrainian, along with constant reminders of home at national monuments to Ukrainian Cossacks and other symbols of a Ukrainian identity.

Russia for decades has seen Transnistria as a bastion of loyalty on the edge of Europe, investing heavily in the region in exchange for the fealty of leaders and the leverage that provides over Moldova. Transnistria in turn looked to Russia as a model which nurtured the same oligarchic rule, consumed very similar truth-lite media, and the fusing together of Tsarist and Communist symbology into a national identity opposed to that of Moldova.

But crucial to that identity was a separate space for Ukrainians, which Russian annexation would no longer permit. Transnistria’s identity, along with the exposure of Russia’s weakness and the region’s economic reorientation, has placed the region further than ever from annexation.