The Kremlin and its agents are peddling false arguments to amplify the case for war in Ukraine. They are rice-paper thin. 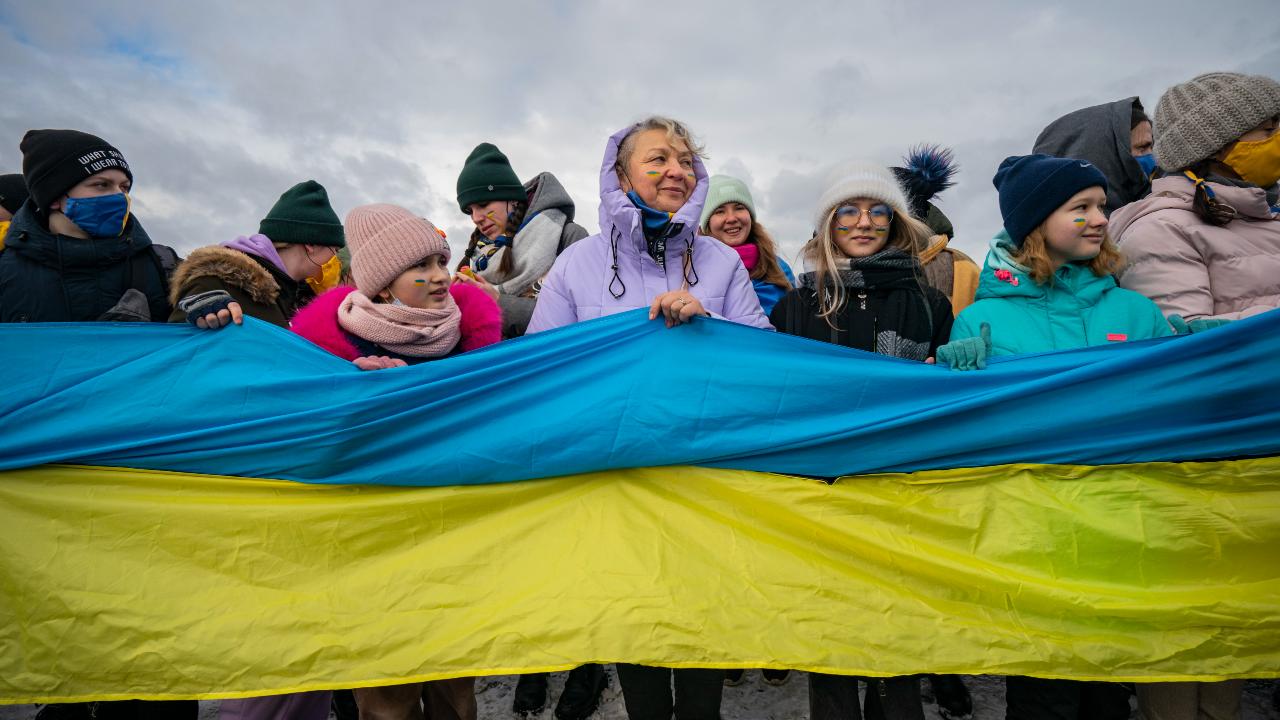 Photo: People hold a long ukrainian flag in a nationalist march along the Paton bridge during the celebration of the Day of Unity in Kiev, Ukraine. On January 22, 1918, the Universal of the Central Rada proclaimed the independence of the Ukrainian People's Republic, and on January 22, 1919, an Act of Unification of Ukrainian lands into a single Ukraine was declared in Kyiv. Credit: Celestino Arce/NurPhoto

Tempting as it might be for Vladimir Putin, he cannot simply kick off a new phase of his war in and against Ukraine without first laying the groundwork of reasoning for his aggression.

As many commentators have noted, we don’t know what Putin is going to do, maybe he himself is still undecided, and maybe the loud and detailed announcements of the sanctions Russia will come under if they encroach further into Ukraine are changing the calculus in the Kremlin. Nevertheless, the rhetoric that precedes military action continues unabated, and comes from high level Russian sources such as blue-ticked Embassy and Foreign Ministry Twitter accounts.

The top five (false) narratives from Russia that are most common at present, being pumped out by Russian state TV for a domestic audience and being parroted by the Kremlin’s apologists globally, are as follows.

The language issue in Ukraine

The purpose of this strain of disinformation is to present Ukraine as divided, contrasting the Russian-speaking east with the Ukrainian-speaking west. There is a nugget of truth here —that Ukrainians do speak different languages, and predominantly (though not entirely) it is along regional lines. The leap that the propagandists want to take from this though is that a large part of the country (the east, where there is war and where war may soon be expanded) is disaffected by the official state policy on language.

The reality is that Ukrainians are united by an indifference to language choice. Ukraine isn’t divided by the language issue. Almost everyone here is fully fluent in and comfortable with either language. Bilingual conversations are commonplace. Russia wants to portray the Russian language, and therefore Russian speakers by extension, as being oppressed. But that the sole state language is Ukrainian has no significant effect on the ordinary life of anyone in Ukraine.

It is notable that some newly arrived correspondents from the West report with some surprise that Russian-speaking cities want nothing to do with Putin’s imperial plans.

Ukraine has plans to re-take the Donbas by military force

This myth is entirely fabricated in Russia. It is highly plausible that Russia plans to stage a provocation as justification for sending more troops across the border, in order to ostensibly protect its newly minted citizens local to the Donbas, who have taken Russian passports in the last three years. The notion that Ukraine has military designs can be disproved by credible and independent parties.

Since the outbreak of war the Organization for Security and Co-operation in Europe (OSCE) has had a team of international observers (including 25 Russian citizens) mandated to report everything they see on the ground in Eastern Ukraine. The OSCE’s reports are a dry reading of the facts, they take no sides. The men and women who make up this special monitoring mission (SMM) are drawn from across the globe and they undertake dangerous work. If Ukraine was moving equipment or manpower into place to retake the Donbas by military force, the OSCE SMM would be immediately aware of and report this. (For example, the SMM’s report of February 8 showed significant breaches of the ceasefire deal by Russian-backed forces and one by Ukrainian forces. There were no reported attempts to hinder the mission’s work on the Ukrainian side of the line and no indication of a military build-up.)

Nevertheless, Russia’s Ambassador to the United Nations still pretended that this was a real possibility at the recent emergency Security Council meeting over the situation in Ukraine.

Russia is under threat!

President Putin likes to portray himself, equally, as a man of great strength and as a victim. If you run one of the most sophisticated propaganda campaigns ever seen, those diametrically opposed notions can coexist and be accepted by some with little discernable cognitive dissonance.

The only threat that points in Russia’s direction is the threat to the Putin regime from ideas such as democracy and rooting out corruption. But, just to placate the doubters, consider what military action against Russia might look like. We know that Ukrainians have signed up to fight in territorial defense regiments in the face of the rising drumbeat of war, but they hardly amount to a shock force capable of seizing and holding Russian territory. Elsewhere, the supposed threat from NATO states bordering Russia amounts to far fewer than the 130,000 Russian personnel now deployed. Nothing in the 31-year history of modern Ukraine suggests its leaders would order military action amounting to mass suicide. The idea is, for all manner of reasons, preposterous.

Ukraine is populated by nazi sympathizers and fascists.

There are two roots to this fabrication, and one main reason for it to be used now. That reason is because it is easier to kill another person after they have been dehumanized. Wars require soldiers to kill the enemy, an act made much easier if the enemy is a fascist or a nazi preparing to commit atrocities.

One of the roots of noxious propaganda lies in the fact that during World War II (yes, today’s propaganda has a tail that runs back 75 years) some Ukrainians decided to oppose the Red Army by joining the Germans. This is a very simplified version of that history, for reasons of space, but suffice to say those Ukrainians did not require a German presence to fight they Red Army; they would have done so regardless.

The second root derives from the fact that some modern-day Ukrainians, are motivated by obnoxious far-right ideologies. Such people, sadly, can be found everywhere. Extremists are abhorrent regardless of their nationality (there are more than a few in Russia), but such views are proportionally far less common in Ukraine than they are in other, even European, countries.

Ukraine refuses to abide by the Minsk peace agreement.

This topic has been covered in more detail previously, but it would be remiss not to include it in this list of current propaganda narratives, as it is again being pushed by Russia as justifying its bellicose behavior.

The facts are as follows. There is disagreement between the sides on how Minsk should be implemented. The timing and conditions for the local elections envisaged in the agreement are one such dispute. What we have seen from Russia is repeated bad faith when it comes to the stated aim of Minsk — the return to Ukrainian government control of the territories up to the international border. Rather than work towards that aim, Russia frustrates it. That has allowed the Kremlin to deepen its hold on the territories it invaded nearly eight years ago. It appears that Russia will never, in fact, return them. That should be recognized since the facts on the ground tell us that this is so.

The key issue to note is that Russia refuses to abide by point one, a ceasefire, and the withdrawal of whole categories of weapons. Indeed on the day you read this article, those forbidden artillery pieces and mortars are highly likely to be employed against Ukrainians.

We are about to hear a great deal more about the Minsk Protocols. The French President Emmanuel Macron arrived in Kyiv on February 8 after meeting Putin and announced: “The Minsk accords are . . . the best protection of the territorial integrity of Ukraine. Based on the commitment of the two sides, Russian and Ukrainian, we now have the possibility of advancing negotiations.”

It is perhaps worth reflecting in the six years and 361 days since Russia agreed as part of Minsk to stop its armed aggression, it has refused to do so.

Paul Niland is an Irish writer living in Ukraine for almost two decades, and the Founder of Lifeline Ukraine.