NATO and the EU have an enticing opportunity to improve relations between the sometimes fractious states of the region. 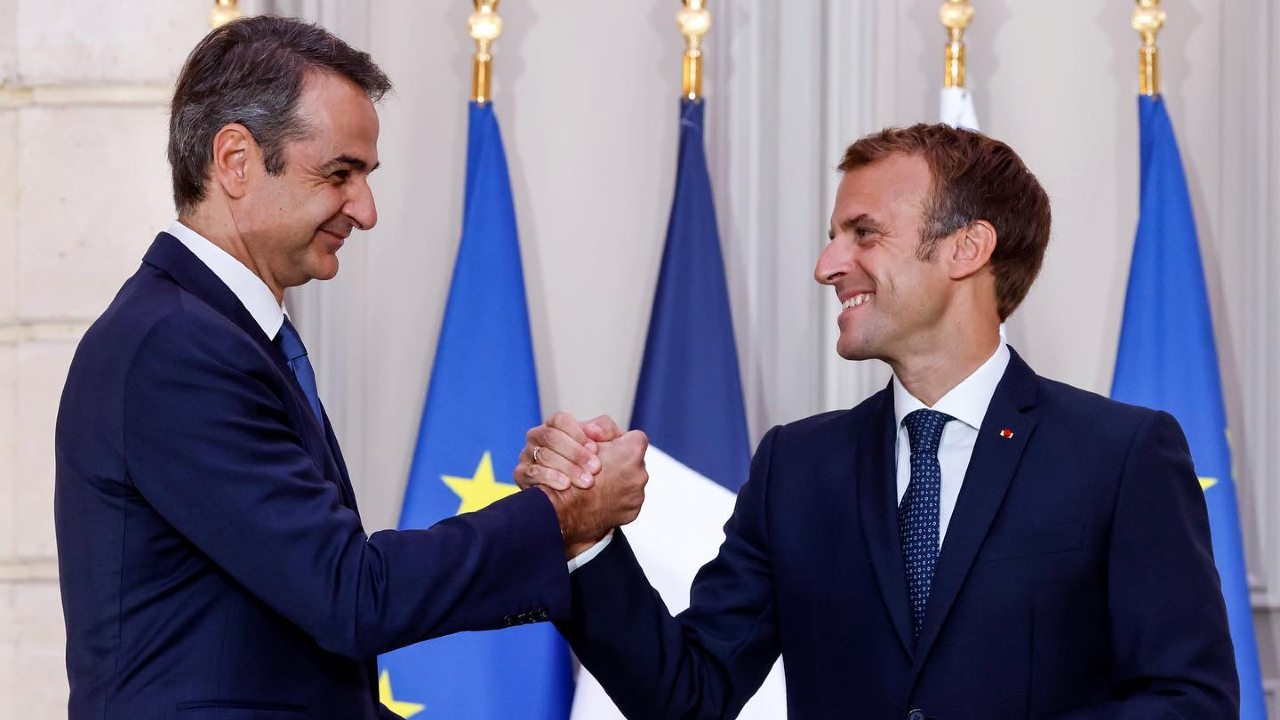 Photo: Pictured Kyriakos Mitsotakis and Emmanual Macron at the signing of the Agreement on the establishment of a strategic partnership for cooperation in defense and security. Credit: kyriakos_ via Instagram.

Russia and its forerunners, the Soviet and Tsarist states, spent many decades seeking and buying influence in the semi-circle of the eastern Mediterranean, for centuries one of the world’s great geopolitical cockpits. That investment has made a significant difference now that those onetime friends have been asked to join Western partners in NATO and the European Union (EU) to act decisively against Vladimir Putin’s aggression in Ukraine.

There has been an absence of enthusiasm. Asked to sanction Russian companies and individuals, to seize Russian-owned property and financial accounts, to supply weapons to Ukraine some, like Greece, have actually taken forceful measures wholly in accord with the US and north European allies. But even here, the center-right government may pay an electoral price for getting ahead of public opinion. Its old rival and NATO ally Turkey, on the other hand, has refused to implement sanctions for reasons of economic and political self-interest. And it’s not alone.

The responses of individual countries in the region have varied a great deal, but a common feature linking them all is the fine line they have to walk in their relations with Russia (and the West), mostly because of key geo-economic interests, including energy and food supplies, other economic issues and their own geopolitical rivalries.

This ambiguity may grow if the economic repercussions of the conflict, whether in terms of food insecurity or sanctions-induced inflation, fuel public discontent and push governments to reconsider their attitude towards the conflict.

While Russia has certainly paid a price — especially from NATO and EU members — the situation is nothing like as bad as it could be for Putin and his ministers.

On the surface, the unprecedented threat to European security emanating from the Kremlin has induced — with the predictable exception of Syria — unanimous condemnation from Eastern Mediterranean countries. But this has also fueled domestic tensions given each country’s unique relationship with the Kremlin.

As EU members, Greece and Cyprus have endorsed an incremental, yet unprecedented, sanctions package. This positioning by the center-right government in Athens marks a significant shift in Greece’s historically sympathetic approach towards Russia and comes at a huge economic cost. In 2021, for instance, imports from Russia were worth $4.2 billion and amounted to a sizeable 13.7% of Greece’s total imports, while losses are likely to include the tourism sector, with Russian travelers now largely locked into their own country.

Equally important, like several European countries, Greece is heavily dependent on Russian hydrocarbons, including 40% of its gas. New sanctions targeting the energy sector would exact a huge toll on the country’s economy. The government’s position is way ahead of the popular mood — with 65% of a recent poll’s respondents advocating for Greek neutrality and roughly 70% objecting to the shipment of weapons to Ukraine. These objections emanate not only from a sentiment of cultural and religious affinity with Russia, but also from a perception of Russia as a historical geopolitical partner against rival Turkey. Equally important, a vivid pro-Russian sentiment remains a key feature of the Greek left in its anti-US as well as anti-NATO stance, a legacy of the Cold War. These issues are likely to feature prominently in next year’s Greek elections.

Similar sentiments have gained traction in Italy, where Prime Minister Mario Draghi’s government had to face initial reservations from members of the Five Star Movement and the League — both populist coalition members — over the decision to send weapons to Ukraine. This reluctance matched the results of a recent national sample showing that 55% opposed the provision of offensive military equipment to Ukraine, against only 33% support.

According to the same poll, however, almost 70% of respondents agreed with sanctions targeted at Russia, although this level of support may decline if the economic repercussions start to eat into households’ budgets (like Greece, Italy imports around 40% of its gas from Russia.) Much as in Greece, elements of the Italian left, especially far-left milieux, have deep sympathies for Russia, mostly emanating from the rejection of a perceived US hegemony dating back to the Cold War. Far-right and populist political parties, most notably Matteo Salvini’s League, have a long-running relationship with the Kremlin, and have received political support in return. In 2019, a tape was released allegedly indicating Russian attempts to covertly fund the party. The League has denied that it ever benefitted from such transactions.

Much more complex is Turkey’s position, which reflects years of geopolitical balancing between the West and Russia. While Turkey remains a key NATO member and has firmly condemned Russia’s aggression against Ukraine, in recent years President Tayyip Erdoğan has increased bilateral cooperation with Russia in several areas, including energy. The relationship served the government whenever it faced the US and European pressure regarding its checkered human rights record or felt its regional aspirations were not respected, for example in Syria and Libya. This explains Turkey’s decision to avoid sanctioning Russia over Ukraine; it has even proposed a role for itself as a mediator, despite sending advanced drones to Ukraine, something reported to have inflicted a heavy toll on Russia’s invading forces. Overall, Turkey is now clearly seeking reconciliation with its Western partners, but it will have a bumpy road head given the long list of unsolved issues, especially on energy.

Relations between Turkey and the US worsened after Washington’s silence after the failed June 2016 coup against Erdoğan, in stark contrast with Russia’s solidarity, and have been compounded by the cooperation between the US and the Kurdish-led Syrian Democratic Forces in Syria, although interactions between Turkey and Russia there have also been far from positive.

Despite the condemnation of Russia’s behavior, caution has characterized Israeli and Egyptian reactions too. Both countries maintain solid relations with the Kremlin and have refused to sanction Russia or close diplomatic doors. Israel also engaged in repeated high-level mediation efforts, albeit with limited results. For Israel, Russia remains a key interlocutor in Syria, where the two countries have established a cooperation to pursue their own military goals without stepping on each other’s toes.

Still, the recent antisemitic comments made by Russian foreign minister Lavrov forced Israel to vocally condemn Russia, signaling a shift in its balanced approach. As for Egypt, Russia is a key supplier of wheat and military hardware and, through the state-owned Rosatom company, is building a $26 billion nuclear plant in Dabaa to improve Cairo’s energy security. These are strategic ties that won’t disappear anytime soon, although the impact of sanctions could delay or freeze some projects.

The region as a whole also has problems with Turkish energy aspirations.

A longstanding Turkish-Greek dispute over the demarcation of maritime borders and exclusive economic zones (EEZs) is a case in point, but should be seen as complementary to the thorny issues of Cyprus and the contested Greek sovereignty of east Aegean islands close to Turkey’s shoreline, at issue since the 1920s.

The establishment of the Eastern Mediterranean Gas Forum (EastMED) in late 2018 sought to provide a multilateral framework for eight regional players (Greece, Cyprus, Israel, Palestine, Egypt, Jordan, Italy, and France) to seek a sustainable regional gas market. And the initiative has had some success in helping this process, with one critical shortcoming: Turkey’s exclusion from the EMGF club.

This exacerbated Turkish sensitivities and worsened relations with its western and southern neighbors, pushing President Tayyip Erdoğan’s government towards more muscular action which in August 2020 very nearly escalated into an armed confrontation with Greece and France. That was averted, but France nonetheless signed a mutual defense pact with Greece last year, pledging military aid if it was attacked. The treaty was very clearly aimed at Turkey.

Given the dispute’s complexity, agreements limited to the energy sphere are likely to be feeble or short-lived without a real realignment at the political level.

And yet, despite these divergences, Russia’s aggressive and revisionist foreign policy offers the right incentives to mend fences and revive cooperation. In the past few weeks, Turkey held high-level bilateral meetings with Greece and Israel aimed at improving relations and revitalizing economic ties, and has restarted dialogue with Italy and France over closer economic and defense collaboration, including the acquisition and co-production of the Franco-Italian Eurosam SAMP/T air defense system.

Political and economic dividends may also come from the energy sector, especially after the divisive EastMED project was irreparably crippled both by the US and EU’s decisions to rescind their diplomatic backing due to geopolitical and cost-benefit considerations. In fact, the joint exploitation of the untapped energy potential of the Eastern Mediterranean would allow Europe to reduce its energy dependency on Russia, a significant win for all those involved. This would be helped greatly by the EU taking on a greater role in its south-eastern neighborhood.

Some encouraging signals of regional détente also come from the first ministerial-level meeting of the US-Turkish strategic mechanism in early April, which focused on improving bilateral cooperation in areas such as economy and defense. The recent openness from the US administration regarding the long-drawn-out sale of upgraded F-16s (as a replacement for the banned sale of more advanced F-35s) is a step in the right direction and helps to reassure Turkey about the US commitment toward its ally at a critical time.

Cooperation in multiple areas becomes essential to guarantee stability while effectively curbing Russia’s influence in the Mediterranean. The war in Ukraine also offers an opportunity for both the EU and NATO to step up their presence in the Mediterranean and start to devise new security architecture able to withstand old and new challenges, ranging from traditional military threats to climate change.

This is where the EU’s technological know-how and commitment to sustainable development should come into play, and where NATO, in particular, may consider the idea of a permanent naval force to boost its situational awareness and power projection.

Frederico Borsari is a Leonardo Fellow at the Center for European Political Analysis (CEPA), NATO 2030 Global Fellow, and a Visiting Fellow at the European Council on Foreign Relations (ECFR). His main research interests include security and defense dynamics, transatlantic security relations, and the impact of new technologies on warfare.