Russian media’s strong negative reaction to the Estonian foreign minister’s statement that the Nord Stream 2 pipeline is not in the European Union’s interest shows just how important the project is to Moscow, and illustrates a fundamental principle of its foreign policy: size and power matters, laws and alliances do not. In commenting on 2 […] 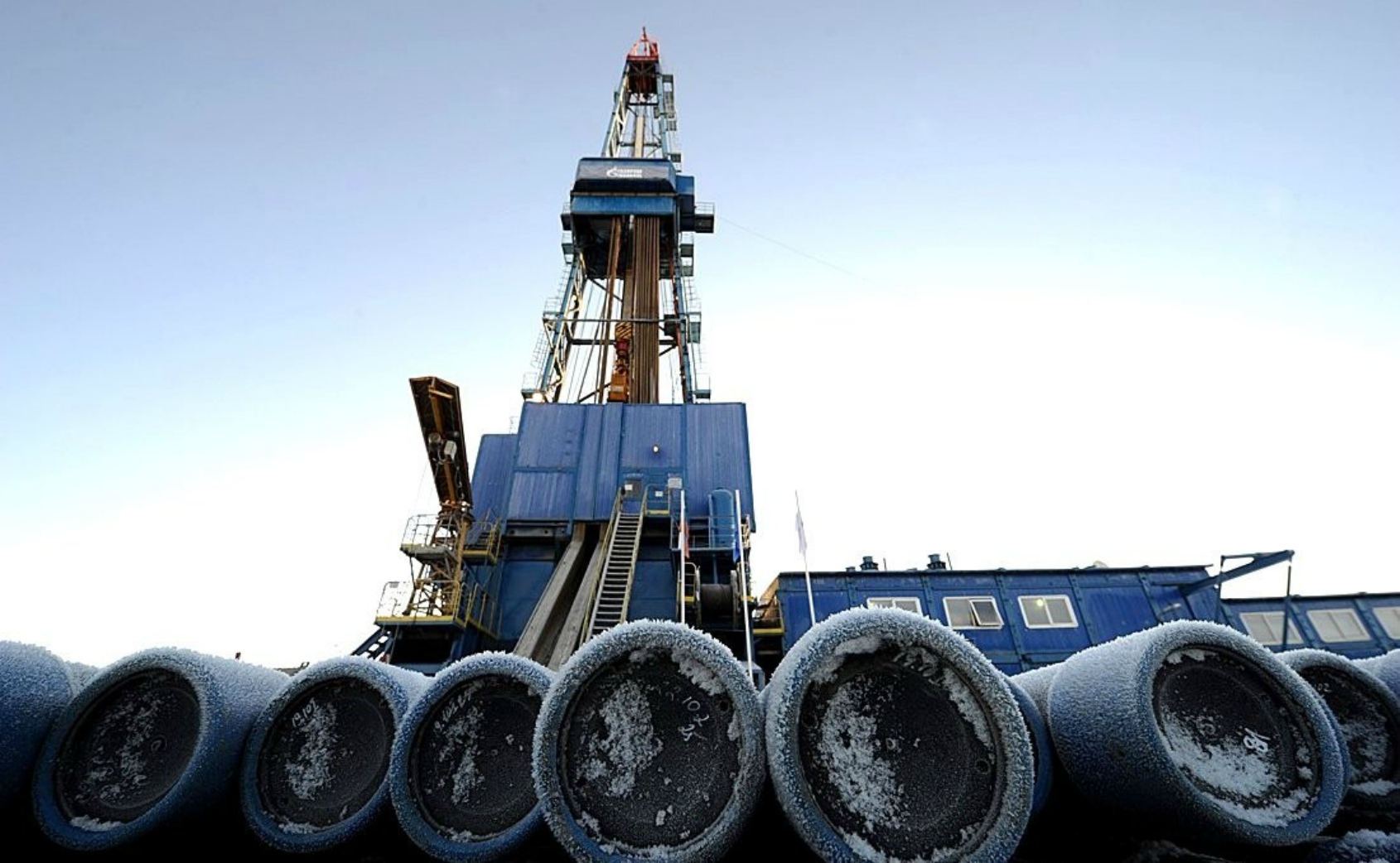 Russian media’s strong negative reaction to the Estonian foreign minister’s statement that the Nord Stream 2 pipeline is not in the European Union’s interest shows just how important the project is to Moscow, and illustrates a fundamental principle of its foreign policy: size and power matters, laws and alliances do not.

In commenting on 2 July on President Trump’s call to German Chancellor Angela Merkel to stop supporting the Nord Stream 2 project – which would bring gas to Germany directly from Russia via the Baltic Sea – Estonian Foreign Minister Sven Mikser said in an interview with Die Welt that putting the brakes on the project would be in the interest of the EU. According to Mikser, Nord Stream 2 serves not only Russia’s economic but also its geopolitical goals and is a tool for Russia to intervene in EU politics.

This statement caused a storm in Russian media. Within one day, fourteen Russian media channels, including TASS, RBK, Izvestiya, and RIA Novosti, published 26 articles on the subject. Many of the articles reflected the tweet of Russian Senator Aleksey Pushkov, the former head of the Duma’s Foreign Affairs Committee, which ridiculed Estonia’s right to make any statement concerning EU politics. According to Pushkov, Estonia is too small to make any demands, and no one cares what it has to say. 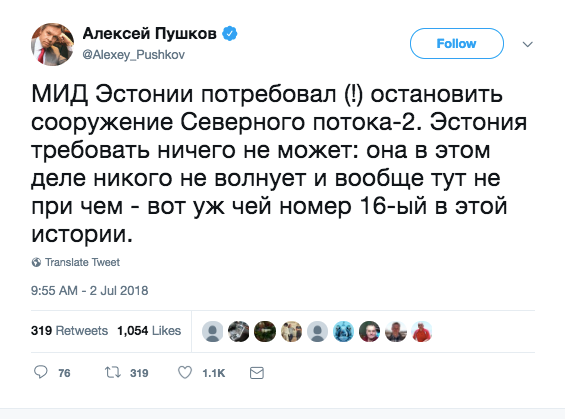 The tweet by Aleksey Pushkov, Russian Senator and former chairman of the State Duma Committee on International Affairs on 2  July 2018. The tweet translates: “Estonian Foreign Minister demanded (!) that the construction of the Nord Stream 2 must be stopped. Estonia cannot demand anything. No one cares what she has to say, and, more generally, she has nothing to do with this – she is No 16 in the whole story. ”

This is not the first time that Pushkov has reacted strongly to Estonian foreign policy statements. In April, both Pushkov and former Russian Deputy Prime Minister Dmitry Rogozin mocked Mikser’s comment on Europe’s need for a strong and unified position on Russia. In May, Pushkov ridiculed Estonian President Kersti Kaljulaid’s statement on Estonia’s military exercise, codenamed Hedgehog. In June, he criticized former Estonian President Toomas Hendrik Ilves’ statement on Estonian trust in NATO.

All these reactions have one thing in common: they all are derogatory towards Estonian foreign policy goals and its trust in its allies. The essence of the criticism was captured by the title of an article on the website of the TV channel Zvezda, a nationwide network run by the Russian Ministry of Defense. That article describes the general tone of Pushkov’s statements: Pushkov “put Estonia in its place.”

As to what Estonia’s place might be, according to Moscow’s world view, another set of articles gave some insights. The articles on Pushkov’s tweet were followed by articles quoting Alexander Domrin, a frequent contributor for Sputnik and RT, who was described as an American political scientist and professor at Russia’s Higher School of Economics. Commenting on Mikser’s statement, Domrin, following Pushkov’s line, said to Izvestiya that the Baltics, the “Russophobic Russian periphery” and “sixes“ of Europe, are afraid that Trump and Putin’s meeting in Helsinki could bring about concrete results. But Domrin said no one cares about what Estonia thinks or even knows that Estonia exists. In objecting to Nordstream 2, Estonia acts like a little dog that barks at an elephant. After all, Estonia itself has no resources whatsoever. So, despite what Estonia has to say, the Nord Stream 2 will be built.

The article in Izvestiya on July 2.

Domrin’s statement contains two cultural references that need to be explained to understand their meaning – and, possibly, why their statements gained such attention and positive feedback in Russian media.

The “sixes” of Europe, the expression Domrin uses to refer to the Baltic States, is slang expression used by Russian criminal subcultures. It means “one of the lowest grades in the hierarchy of thieves that perform the functions of servants.” Its origins are card games where the lowest-used cards were sixes. Criminal slang is not uncommon in Russian political culture, and is frequently used both by Kremlin and by Putin. Sometimes this slang finds its way into Russian official statements. (Russian linguist Vasily Gatov has noted a Russian Foreign Ministry briefing saying that “Americans prefer to pull down their allies rather than take their interests into account,” the verb opustit (“to pull down”) referring in Russian criminal argot to homosexual rape. Opustit is also used to describe how tougher inmates make weaker ones their “bitches.”)

“A little dog that barks to an elephant” is a reference to Russian fabulist Ivan Krylov’s fable “The Elephant and the Pug.” In the fable, the pug dares to bark at the elephant only because he knows the elephant pays little attention to it, because it is too small to even notice. The message that Pushkov and Domrin are pushing: It is not Estonia’s place to say anything concerning international politics; even if it does, Estonia is too insignificant to pay any attention to; and nothing that Estonia says can change the foreign policy of big counties like Russia or the United States.

In addition to the cultural aspect mentioned here, this worldview can be seen in Moscow’s approaches to international law. In 2007, shortly after the so-called Bronze Night that led to massive Russian cyber and disinformation attacks in Estonia, Estonian scholar Lauri Mälksoo said that Russia considered Estonia its vassal state. Even though the Peace of Westphalia from 1648 states that each sovereign state, no matter how large or small, is equal in international law, Russia has always distrusted the idea that smaller neighboring countries could in fact be independent and sovereign. Rather, Russia views these countries as vassal states: they either belong to Russia, or to somebody else. This worldview leads to the belief that smaller countries are never subjects of international relations, but only its objects. Estonia thus is seen in Moscow as having gained its independence because Russia and Germany decided to let it do so. But when Russia and Germany decided otherwise, it was swallowed up.

According to Mälksoo, Putin’s Russia holds the same view on international relations today. Major powers make deals and small countries are still seen as vassal countries, with limited sovereignty and no right to an independent foreign policy. This aspect explains Moscow’s strong reaction to Estonian politicians’ foreign policy statements and the wish to “put Estonia in its place.” 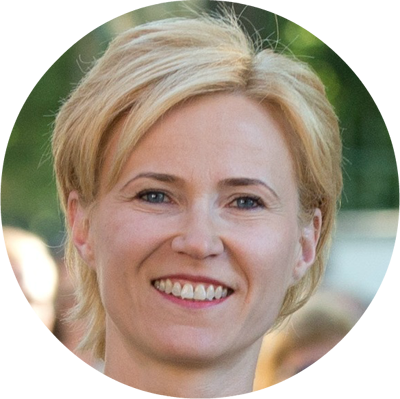