An extraordinary and hateful essay has revealed the malignancy in the hearts of Kremlin policymakers. 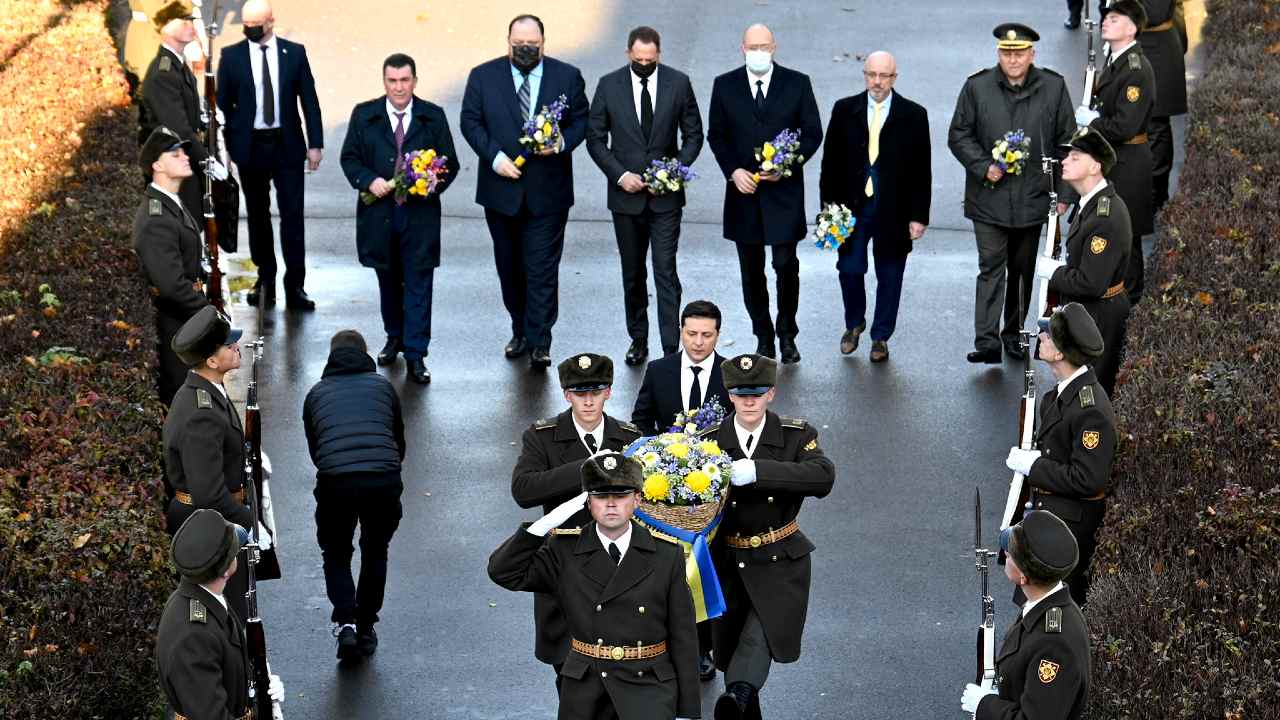 Photo: Participation of the President of Ukraine in the events on the occasion of the Day of Liberation of Kyiv from Nazi Invaders. Credit: Presidency of Ukraine.

Russia’s rage at and frustration with Ukraine has become very clearly visible. On October 11, former president and current Deputy Chairman of the Security Council, Dmitry Medvedev, published an expletive-laden article aimed at Ukraine and at President Volodymyr Zelenskyy, describing his country as a vassal state of the US with whom it is impossible to negotiate.

He accused the Ukrainian people of losing their identity (which for him and his colleagues is Russian) and described Zelenskyy as disgusting, corrupt, and faithless, having repudiated his (Jewish) identity to serve rabid nationalists. This, Medvedev continued, meant Ukraine’s head of state resembled a Jewish Sonderkommando, a reference to those incarcerated Jews forced on pain of death to dispose of gas chamber victims during the Holocaust. Negotiations with such people and such a state are, therefore, “pointless,” he said.

This repellent article bears serious scrutiny. As regards Ukraine it confirms, extends, and threatens: it confirms the Russian elite view that there is no such thing as a distinct Ukrainian identity, that consequently, the Ukrainian state is some sort of monstrous historical deviation from its true place within Russia, and that it really has no right to sovereign existence. The reader must conclude that its continuing existence is seen as a continuing offense to modern Russia’s ongoing pretensions to empire and also, implicitly, the entire narrative of Putin’s state as the true heir of Kievan Rus’, the early medieval Russian entity, which had its capital in Kyiv.

Medvedev’s screed extends this narrative not only by his chauvinistic and ad hominem attacks on Ukrainians and Zelenskyy but also to members of the Ukrainian government for being corrupt and insane, i.e. pro-Western. Here again, Medvedev, who would only have published with Putin’s approval, reveals that the negotiations that the Kremlin claims to seek are merely a chimera. Russia’s government has made clear that it cannot accept an independent Ukraine, whatever its boundaries. And that its formerly strident demands for resumption of negotiations on the basis of the Minsk Accords of 2015 (which it has not bothered to fulfill) should be seen as a demand for the destruction of the Ukrainian state. This is wholly illegitimate.

Finally, Medvedev’s diatribe explicitly breaks off negotiations and must be seen in the context of the crisis generated last spring by Russia’s mobilization and deployment around Ukraine of some 120,000 personnel, many of whom still remain.

Europe’s current energy crisis, which the Kremlin is exploiting, is also is relevant here. One of the obvious objectives is to further isolate Ukraine from Europe. And as Timothy Garton Ash recently pointed out, once Russia no longer needs Ukraine for gas transit (following the opening of the Nord Stream 2 pipeline under the Baltic Sea) the likelihood of another invasion rises significantly. Taken in tandem with the continuing military, informational, and now energy pressure upon Ukraine, the likelihood of an invasion grows.

However, the revelations contained, implicitly or explicitly, in Medvedev’s article do not end here. Putin’s propagandists (and Putin himself) regularly assert that the president has quietened antisemitism in Russia and that its statecraft is sensitive or attentive to Israeli interests. Last month, Israel’s Prime Minister leader Naftali Bennett even called him “a true friend of the state of Israel and the Jewish people.”

This is not the case. The Putin regime has once again consciously sought to instrumentalize Russian and Ukrainian antisemitism for its own purposes, as Medvedev’s article makes all too clear. Indeed, there is no more odious attack on a person of Jewish origin, like Zelenskyy, than the accusation of Nazi collaboration. The fact that one of Putin’s inner circle reaches for language from the ancient armory of hate to indicate the strength of the Russian state’s emotions simply underlines the flaming antisemitism at the heart of the country’s government and the nature of its representatives.

There is a calculation here too. Russian hopes that its words will resonate with Ukrainians relies on the belief that it can exploit what was true in the past — considerable antisemitism in Ukraine — for its purposes in the present. Indeed, one of the staples of Russian disinformation and propaganda since the invasion of Crimea in 2014 is that Ukraine is intrinsically antisemitic and now ruled by a fascist or Nazi (choose your poison) junta. Evidently, Medvedev and his colleagues still believe their own propaganda. Worse yet, they believe that it works and that others share the regime’s hatred of Jews. Russia’s government very clearly believes in the antisemitic instincts of Russians and Ukrainians and hopes to fan that flame for its own purposes.

Amazingly, Western media has so far remained silent on Medvedev’s screed. But given its content, silence is tantamount to a kind of complicity in the lie and the crimes that will ensue. Not only is Putin’s Russia a kleptocracy and an aggressor state, but the regime has also once again returned untruth to the heart of government, a place where it was venerated under Soviet rule. It has also revealed itself as a purveyor of antisemitism for its own cynical purposes.

Thus, Putin’s Russia — like its Soviet ancestor — has now validated Solzhenitsyn’s famous insight that the state for whom lies are a tool is ultimately a state engulfed in violence.