On May 9, Vladimir Putin will almost certainly declare victory over something. It’s not yet clear quite what. 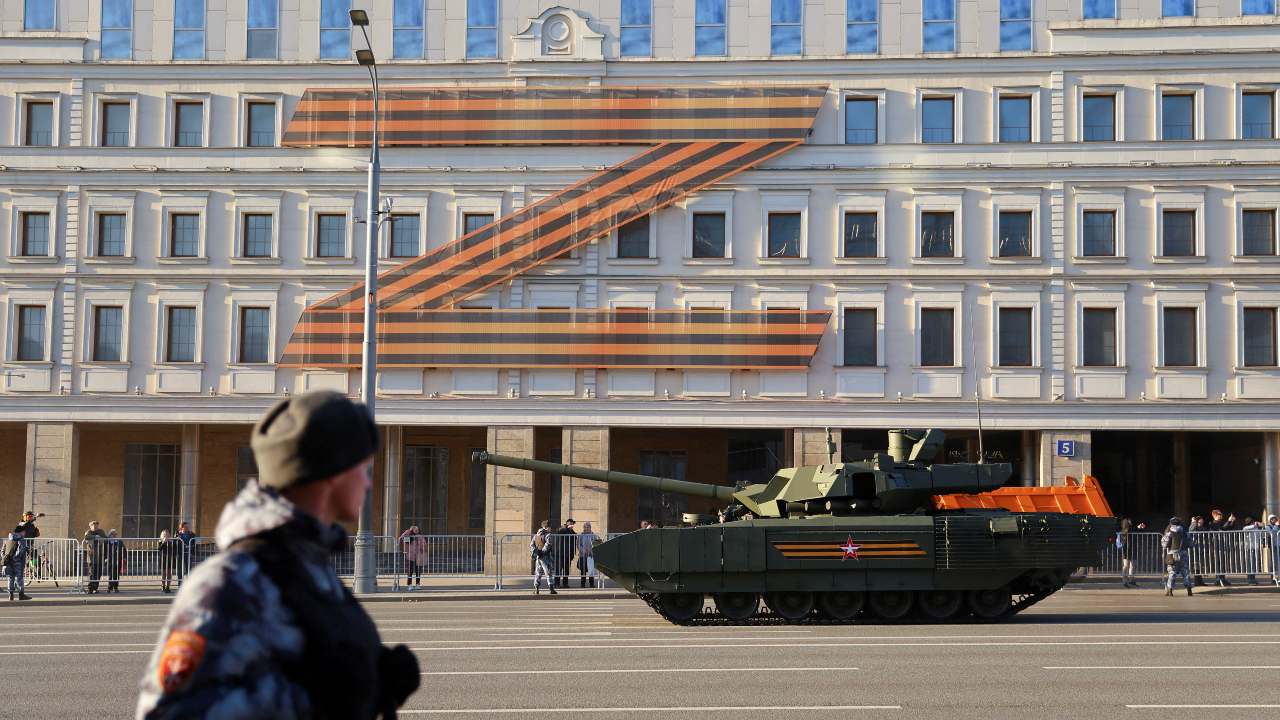 Photo: Russian service members drive a tank along a street during a rehearsal for the Victory Day military parade in Moscow, Russia May 4, 2022. Credit: REUTERS/Evgenia Novozhenina/File Photo

The Russian army’s Donbas offensive is going much slower than expected; Western weapons shipments to Ukraine are ramped up; while in Russia, surveys, rumors and occasional elite defections suggest that the consolidation of public and elite opinion supporting the war is slowly eroding. Meanwhile, Finland and Sweden look all but certain to join NATO in a matter of weeks.

But theatrics matter. From Russia’s point of view, maintaining the semblance of normalcy isn’t only for domestic consumption; if enough foreigners believe it, the West’s political consensus may begin to fray and support for Ukraine might drop.

Nowhere have the Kremlin’s efforts been more successful than in the economic field. Take a recent example. This week, The Economist, a respected publication, was quick to declare that Russia’s economy was “back on its feet”: after all, the ruble’s exchange rate was stable, the country had avoided a bond default, real-time measurements of economic activity and electricity consumption suggested no major panic, and, crucially, Russia was still able to sell fossil fuels at elevated prices to keep hard currency flowing into the country.

It was an eye-catching assessment, and it was also wrong. Such judgments fail to consider the costs and unsustainability of this surface stability. The ruble’s exchange rate depends on draconian capital controls, low imports and the lack of an effective market for the currency. Russia could avoid default by tapping into scarce domestic reserves, and after walking back from an initial threat to pay creditors in rubles. Economic activity may putter along for the time being, but this will drastically change as industries from food production to machine building, highly dependent on foreign ingredients and components, run out of pre-invasion reserves over the summer.

The Economist does have a point regarding the energy industry: if Viktor Orbán’s government successfully continues to delay an EU oil embargo for the ransom of Hungary’s suspended EU funds (worth at least €7bn and withheld for concerns about corruption), Putin may very well be able to claim at least a small victory on May 9. But even here, storm clouds are gathering. The Russian finance ministry is lowering estimates of windfall revenue from energy sales: oil output is steadily dropping as Russian oil is becoming toxic on international markets, there are transportation bottlenecks, and production sells only at significant discounts, if at all. And in spite of Orbán’s behavior, the EU is inching closer to an embargo on Russian oil and oil products regardless.

Perspectives on the war are changing, and not only in Russia. If there was anyone in the West in March who expected that a short, sharp economic blow would make Putin reconsider the invasion, it should be obvious now that they were wrong. Once this is universally accepted by decision-makers, the consequences will be grave and long-term.

This is now beginning to happen. It may have taken longer than many would have preferred for Germany to throw its weight behind an oil embargo, but quite apart from a change in political culture, it also needed a credible plan to replace Russian oil and potentially gas shipments. Two months later, in May, Germany’s position has turned around; along with the determination of most Central and Eastern European EU members, the bloc is moving towards not only a temporary embargo, but a plan to get rid of Russian energy imports altogether much quicker than anticipated.

European companies, such as Renault and Shell, are abandoning major investment projects in Russia, while shipping firms shun the country, reducing trade even of goods that have not been sanctioned. Western powers are eager to turn the “self-sanctioning” of companies into enforceable policy, from an investment ban in the US, to EU plans to sanction marine insurance on Russian oil shipments. Realizing that sanctions are likely here to stay, even Chinese exporters are exploring routes circumventing Russia.

This forces uncomfortable long-term choices on a Russian government that is ill-equipped to make these decisions. Budgetary income is swelling now due to higher oil and gas revenues, evidenced by a fiscal surplus of more than $17bn in the first three months of 2022. But a cushioned budget does not equal a healthy economy. As oil revenues drop and a protracted war forces the state to keep spending on competing priorities — the military, keeping the economy running, indexing wages and pensions, keeping the ruble afloat, mitigating damage from natural disasters, etc. — this will change. Elites may overwhelmingly and performatively support the war now, out of an instinct for self-preservation or direct interests, but this may also change as the resource pie shrinks.

Most importantly, the longer the war drags on, the more consequential Russia’s self-inflicted economic crisis will be. There is little doubt that its dominance of European energy markets is gone. The longer Russia’s forced deglobalization continues, the longer it is blocked from accessing foreign markets and technology, the less chance it has of adapting to these changes.

The contrast between this strategic defeat and the “victory” that Putin will try to sell on May 9 is enormous. Ultimately, however, time matters. Putin’s Russia is losing and Ukraine is winning, but Russia hasn’t lost yet and Ukraine hasn’t won yet. EU decision-makers are realizing the implications of a protracted war.

There is more and more clarity about the unacceptably high cost of Putin’s murderous dictatorship winning; but there is still confusion about the costs of turning Ukraine’s current advantage into a decisive victory. Ukraine’s economy will need billions of dollars of support every month and alternative trade routes; it will need more weapons to turn a faltering Russian offensive into a retreat; and the EU will need to ramp up economic sanctions. Lastly, as time horizons are shifting, it also matters what kind of Russia we want to see emerge.

For this, the EU and NATO should lay out a clear route for a future Russian government to relax this economic chokehold, encourage the betrayal of Putin among elites, and cultivate relations with those Russians who can rebuild the country on a new footing.

This is the path to a future “Victory Day” for Russia and for the West.